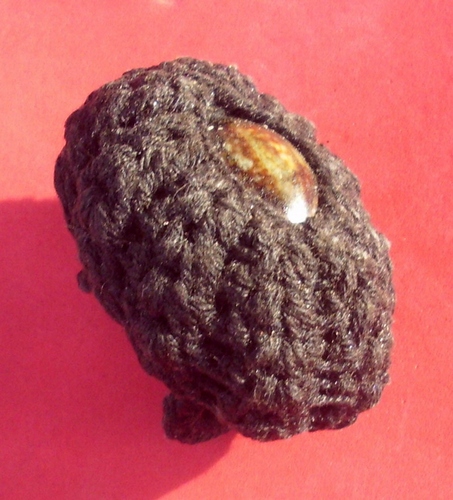 Luang Por Say Master of Khmer Wicha Saiyasarts Bia Gae have been extremely popular ever since he made the first edition, because of the amazing success that devotees who recieved one had after their distribution. To make these traditionally made ancient Magic Bia gae charms, he used Bia (the shell) of only those with 32 teeth, according to his Khmer Dtamra of Magic Bia Gae. He used the formula of a Bia (Cowrie shell), some Mercury, Lead Plate and inserted to seal into the earth. Then took them and placed them on the Pan Kroo (offerings tray to the Kroo), candles, flowers and chanted the Bucha to the Kroo as the first empowerment. Then he took the mercury and poured it into the palm of his hand, and blew some more spells into it, and picked up the Bia shell with his other hand, and slapped the mouth of it against the palm of the other hand with the liquid mercury in it.

Then he began to cast the spell with the chanting of Kata Akom, and the Mercury flew into the mouth of the Bia He then closed it with Chan Rong to stop the Mercury from escaping. He cast further spells as he was closing the mouth of the Bia. Once sealed, he then took it and covered it with the Lead Plating, and drew sacred yantra and Khom Agkhara spells over the surface..

Then he covered them with cord and attached hoops so the Devotee can wear them on a waist string or belt, or even hang around the neck. He then covered them in 'Rak' (pronounced 'Lak' - a black sticky lacquer used to cover certain amulets that wear and tear easily because of close contact with the wearer and friction - i.e Tagrut and Bia Gae amulets). This way the amulets will endure for many decades and even a hundred years or more without breaking. Then he took them and chanted again his spell until the Bia Gae began crawling around the floor like living sea shells from the power of his spell. He chanted further until he felt completely certain that they were magically charged, all of them. Then he distributed them to his Looksit to carry with them for the 108 auspicious blessings it carries to protect and serve them. It will prevent Karma from accumulating, and prevent temptations from approaching, and dissolve the magical power of Puudt Phii Bpisaat (ghosts phantasms and demons), and prevent black magic from having any effect. It prevents accidents (Klaew Klaad), Direct Assaults fail (Kong Grapan Chadtri), illnesses and fevers will be minimal. Prevents possession by ghosts and demons

You can hear the mercury rattle when you shake the Bia, which is a necessity for authentic Bia Gae. The word Bia has a double meaning; 'Interest' (as in the interest on a bank savings account)

'Bia Gae Jon' is the common name for this amulet, and 'Jon' means 'poor'

This is indeed a truly authentically made Bia gae using the Wicha of the Khmer Adepts, and is one of our recommended amulets. Luang Por Say is a Master we believe has powerful Wicha.

Focus your mind and make clear and definite your intention and request/prayer. Make prayer water whilst chanting (focus on the water bowl whilst chanting and praying, hold a candle over it and let the wax drip into it) Offer Gardenia (Scientific Name:Gardenia Jasminoides), and bright red colored flowers. Set up a Khant Ha (brass bowl with six coins, one red cloth one white cloth, incense, tobacco and areca nuts, candles and five lotus flowers), also offer puffed rice, drinks and fruits to the Kroo. The prayer water has the ability to heal  cancer and paralysis, and boils. Sprinke the prayer water over yourself, your clothes and even the rooms you live in, photos of a relative etc. Think of the Triple Gem when you drink the prayer water. If you are going into battle or a dispute, wear the Bia Gae to the front. To chase away and fend off your enemies, wear it on your back side. To approach and socialize with high ranking people and recieve warm welcome, wear it on your right side. When using as a love charm, wear it on the left side. With the Bia Ga sarapat Gon Sarapat Gae, you don't need a full set of different amulets with different purposes, for the Bia Gae has so many Wicha within the one amulet, that if you know how to use it well, it can serve as a powerful aid in most goals, that will bring effective and positive results to your benefit.

This is what we would seriously call an authentically made Magic Charm, from a Master of a fading Generation of Guru Monks who are of the finest the last half century of Thai Buddha Magic

You can even thread a string through the Bia Gae and feed the string around the water bowl and leading to your hand, for empowering the prayer water as you chant.