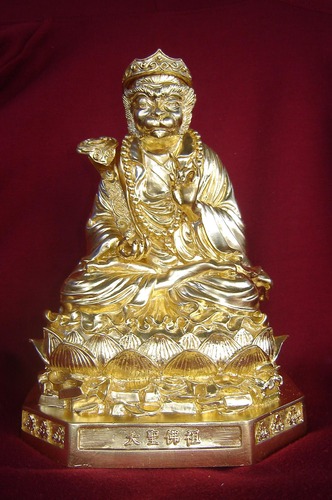 This Amazing, and Exquisitely Beautiful Statue of the Thai- Chinese Monkey God 'Tai Sia Huk Jow', is enough to make you exclaim out loud when it graces your eyes. An extremely delicately fashioned piece of Fine Sacred Buddhist Arts worthy of any Temple Altar, be it a home Altar, or a large altar in a real temple, this statue would be a Welcome Addition. The statue is made from sacred Brass alloys, smelted from ancient amulets and Chinese relics, and has been covered with a thick layer of Real Gold Coating 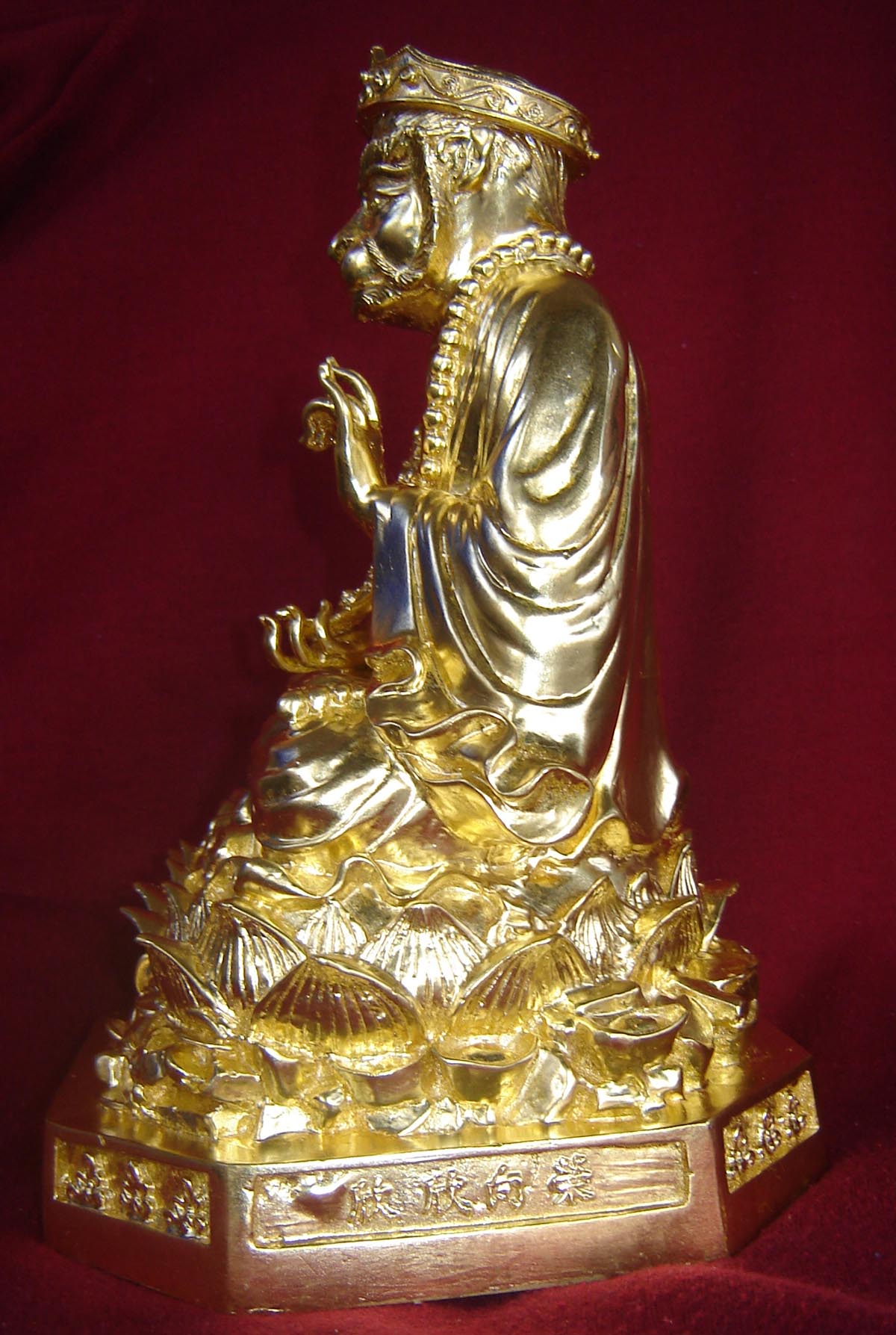 As far as fine Art and Exquisite Sculpture is concerned, this is as good as it gets in this price range. In truth, Little needs saying about this Bucha Statue, because its quality and Sacred Value is instantly Visible even to the Untrained eye. 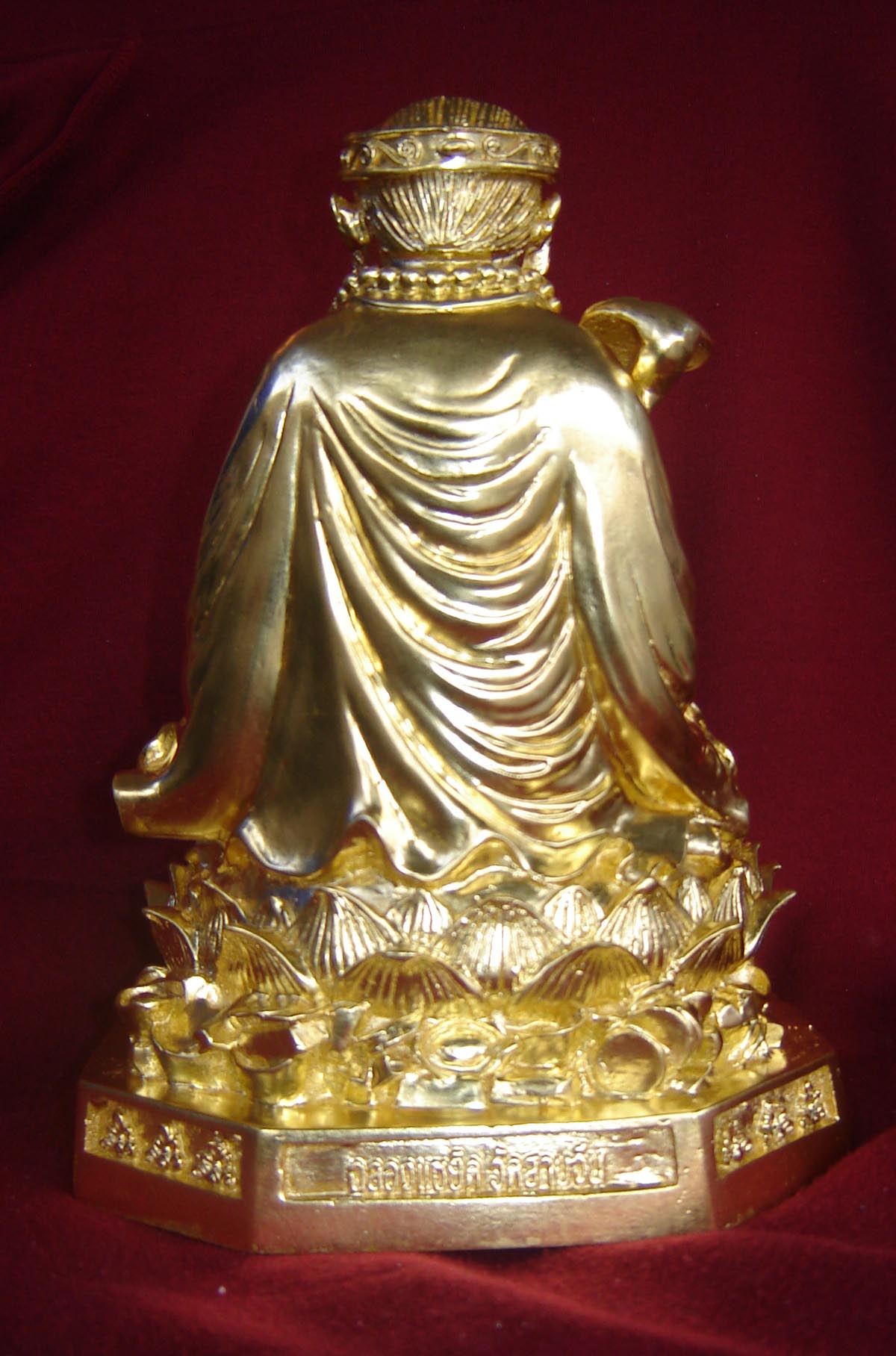 The Deity is clothed in fine regalia and robes, and sits in a Meditative Posture in Enlightened Bliss. He sits on a Lotus Throne which in turn is placed on a mointain of gold and silver ingots. He holds a Naga Head magic staff which is curved like a hook, suggesting that this Arahant was a Ruesi, and also that this Magical Weapon is a hook for catching money, and a goad for instigating prosperity, as well as a crook for restricting enemies and Maras and for reaping rewards, admirers, lovers and customers into your fold. The fine Craftsmanship can be seen to be evident on all sides of the statue, with a fine eye for detail. 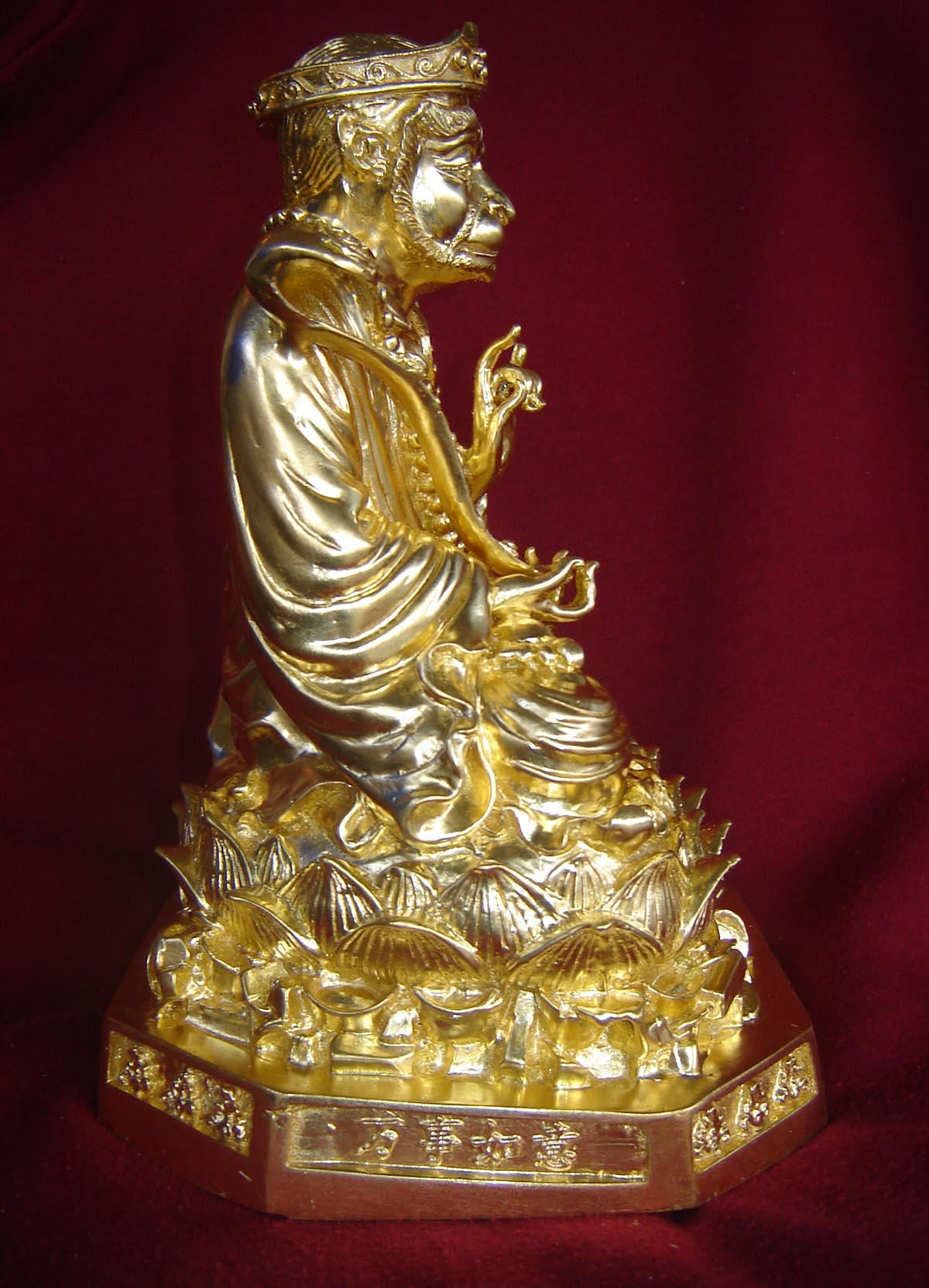 The Bucha Statue comes in 2 pieces, the crown being separate. This statue was released in the limited special Gammagarn collectors sets only, with 588 statues being made in all.

Made in 2554 by the temple of Wat Sam Jeen, and given two empowerment ceremonies, one at the Chinese Shrine of Jao Por Heng Jia and Tai Sia Huk Jow Deities, and another at the Uposadha shrine room of Wat Sam Jeen temple. 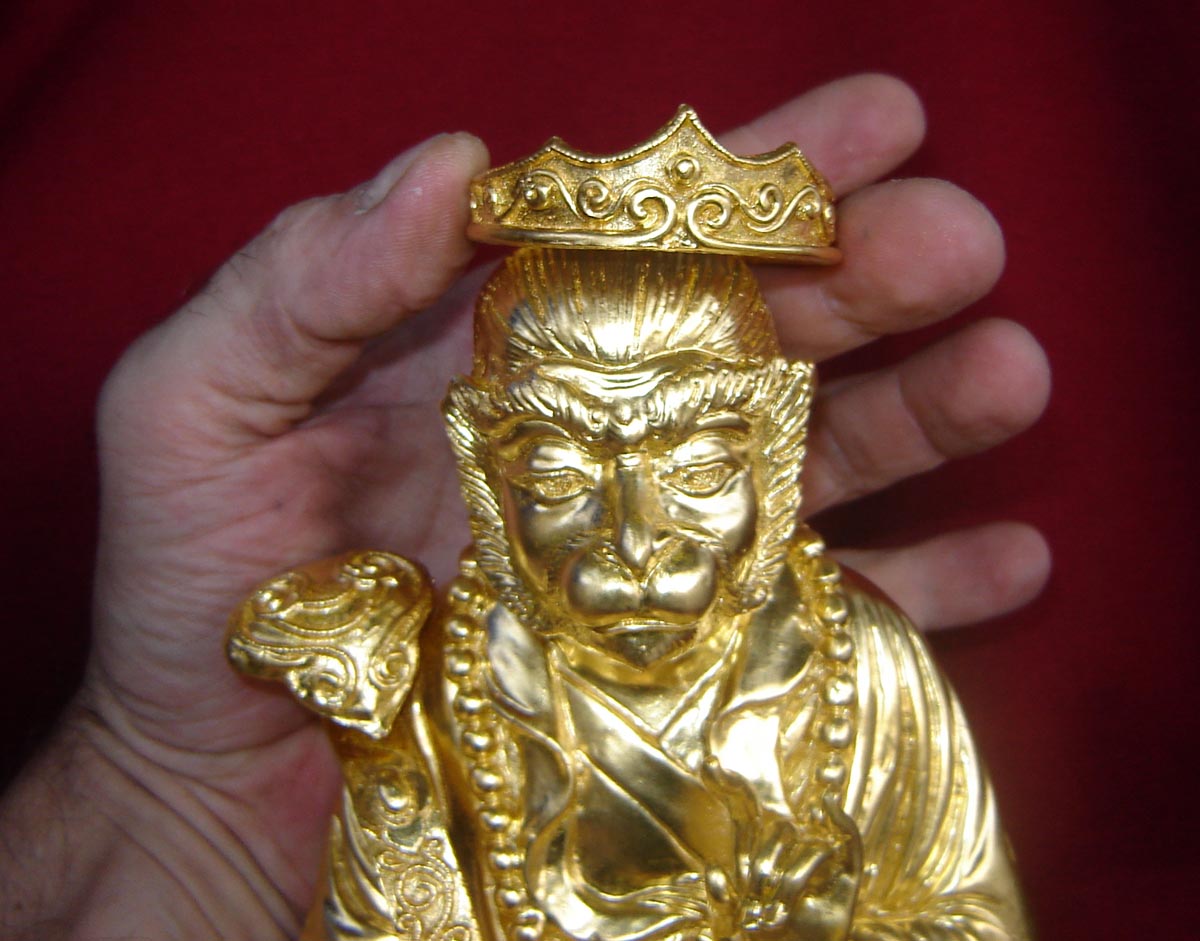 This Thai-Chinese Deity Image was made as a Bucha Statue and as Deity Coin amulets, in two different postures for different magical blessings; 1.Pang Samrej - Success and Accomplishment 2.Pang Chana - Winning, Victory over ones obstacles and enemies This 'Chalong Sae Yid' edition of luxury collectors edition Bucha statues and luxury coin amulets are the first ever making of this Deity in amulet or Bucha form for the Public.Only 588 statues were made. 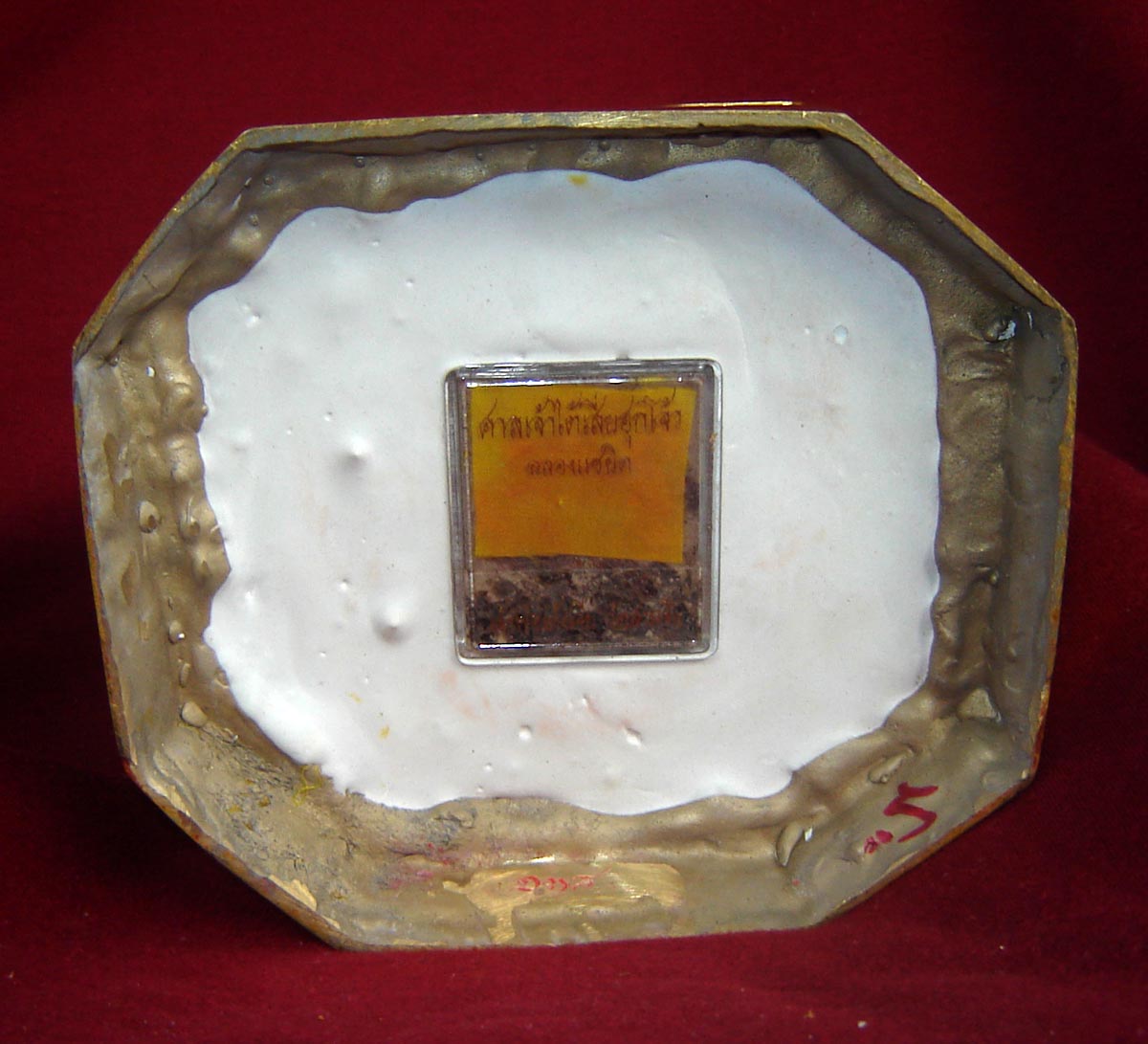