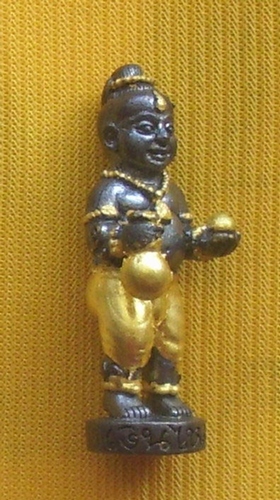 Pra Ajarn Waen Tamma Ragkhidto is a Gaeji Master Monk of the Kalasin Province. His Gumarn Tong Ngern Hlai Ma is made with ancient sacred metals, such as the nails of coffins, remains of the funeral pyre, 'Hrian Bpag Phii' (coins from the mouth of a corpse), Yant 'Na Bpatamang' is inscribed on metal sheeting and another 14 sheets with 14 Yantra for 'Sonti' (harmonizing). 108 Yant with 'Yant Na Maha Mongkol' were also smelted into the sacred metals, as well as many other Yantra on metals such as 'Yant Hnun Taat' 'Dtang Taat', 'Chup Taat' etc. In addition, Yantra were made and added from the Widtingsa-aagaarasudtr, and the Yant Bpanja Khant. 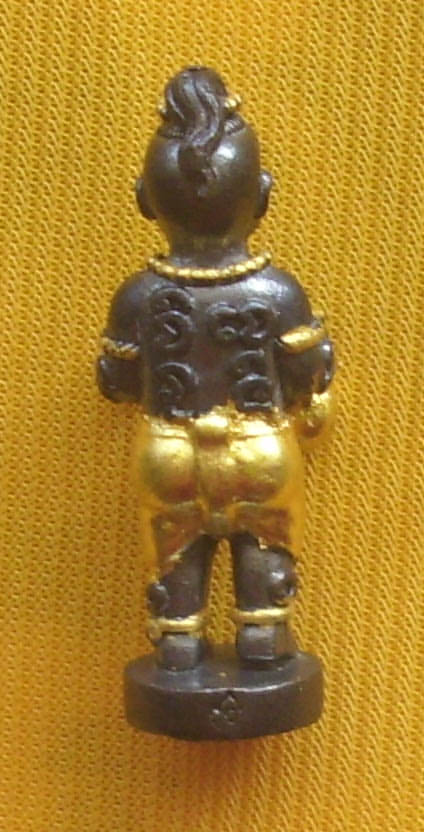 All of these sacred metals were smelted together and formed into the Gumarn Tong effigy. The Gumarn is standing up, and is holding a bag of money. His left hand holds the Miraculous 'Gaew Sarapat Nerk' (wish fulfilling crystal). He is advancing which indicates a steady improvement in life. He radiates much confidence as he walks forward. Both the money bag and wishing crystal elements were separately empowered, so that wishes will be fulfilled and gold, silver and coins will be attracted to you. Then the elements were activated and the five Khanda elements and the Agarn 32 empowerment (32 aspects of living body) in order for the Gumarn Deity to enter and inhabit the statuette, and come to life.

Puttapisek was held on Saturday the 15th of January 2554. Funds raised from these amulets went to build the Dhamma Practice Salon at Wat Pah Prachasamakeetam.

How to care for the Gumarn Tong Deity;

Before you enter the house with the Gumarn for the first time, light 36 incense sticks outside and pray to Mae Toranee (Mother Earth), Jao Tee and Jao Tang (the various local Deities, Devas and spirits), and other sacred presences in the household and family enviroment.

Let your mind send a communication to the Gumarn and let him know that you are inviting him to come and stay with you. Now you should also give a name to the Gumarn Tong, one which you can easily remember at best.

"Naamaanang Samaa So Yudt Dta Tho Yudt Dta Tha" "In the Name of the Kroo Ba Ajarn - I name you (Name which you wish to give your Gumarn Tong''. Say this 3 times, and the next day chant only once. You must always remember his name and must introduce him to all people in the house, and ask him to also protect and lend prosperity to them all.

Comes in original Sachet and Card from Temple - no case included.

How to Chant Kata to Bucha Gumarn Tong >>>