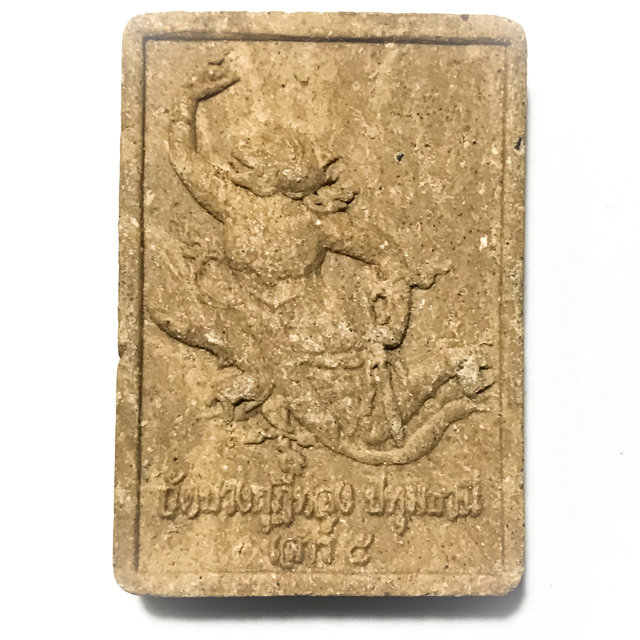 Pong Hanuman Thawaay Hwaen (Hanuman offering Rama's Ring) Hlang Yant Grabork Khwai (with 'crossbar Yantra') Fang Met Khaw Sarn (Sacred rice grain inserted), from Luang Por Chamnan of Wat Bang Kuti Tong. The amulet was released on the 5th Lunar Saturday of 2555 BE in the 'Sao Ha' Edition. A highly recommended amulet for devotees of Hanuman, as well as for practitioners of Muay Thai, and those who are in competitive professions and pastimes, for winning over all your peers, enemies, obstacles and contestants. 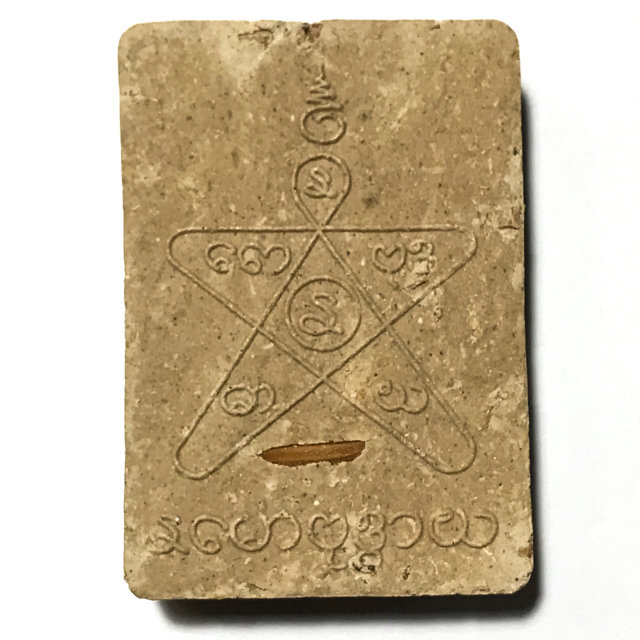 The Hanuman Deity brings not only Invincibility, Charm and Victory, but also induces Lucky Fortunes for Serm Yos (Promotion of Status), and Increase in Intelligence and Fast-Wittedness. Hanuman is the symbol of Loyalty, for his unwavering dedication and selfless service to Prince Rama as told in the Ramayana. He is a General of Rama's army, and hence possesses immense Maha Amnaj commanding power over his underlings. 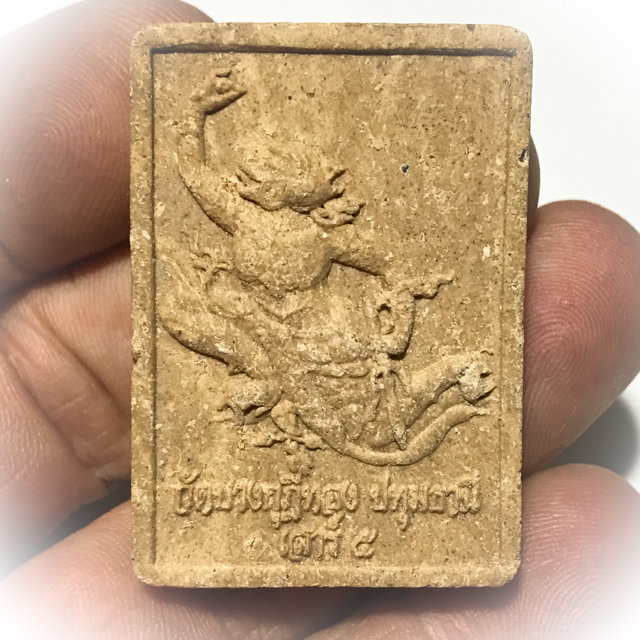 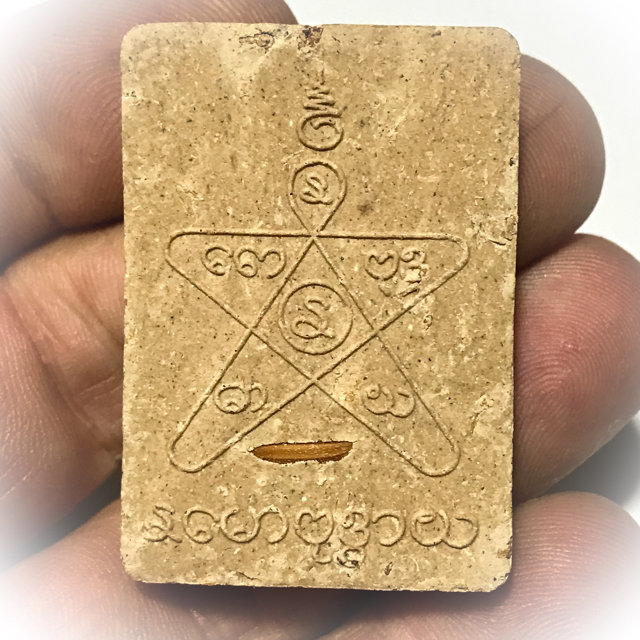 Above; The Sacred Yant Grabork Khwai, also called 'Yant Ongk Pra with the 5 Dhyani Buddha Kata inscribed in Lanna Agkhara 'Na Mō Put Tā Ya. The same Kata is repeated on the lower section of the rear face once more in Thai Lanna Sorcery Script

His strength is immense and second to no other Deity or Demi-God, for which reason he is the mascot and revered Deity of Muay Thai Warriors, who call upon the power of Hanuman to defeat their contestants and opponents in battle in the ring. The Winning Power of Hanuman, will clear the way of difficulties, whilst making all ventures successful. 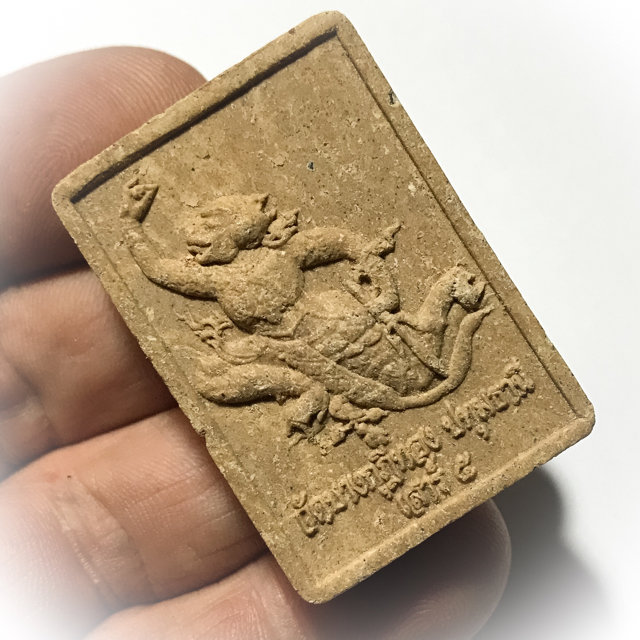 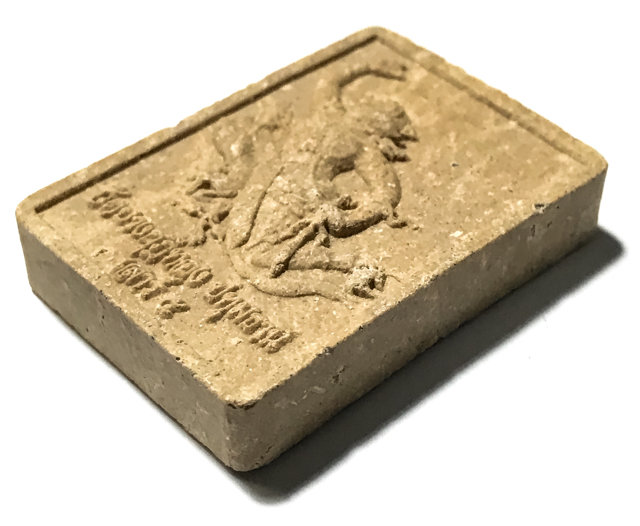 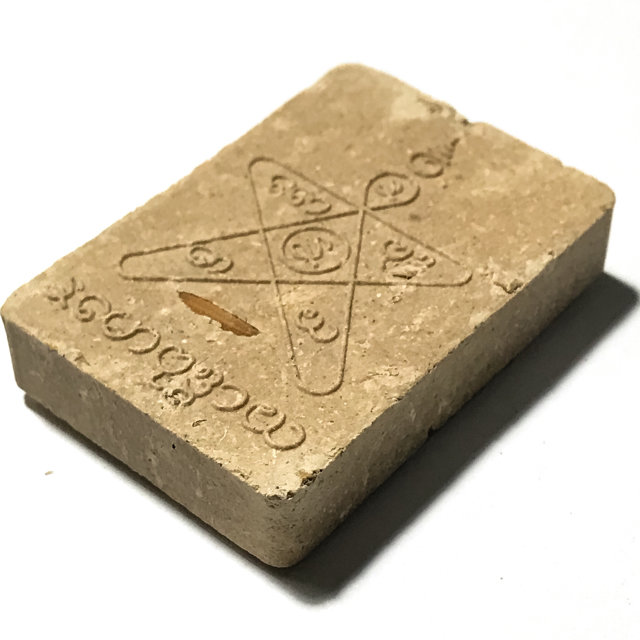 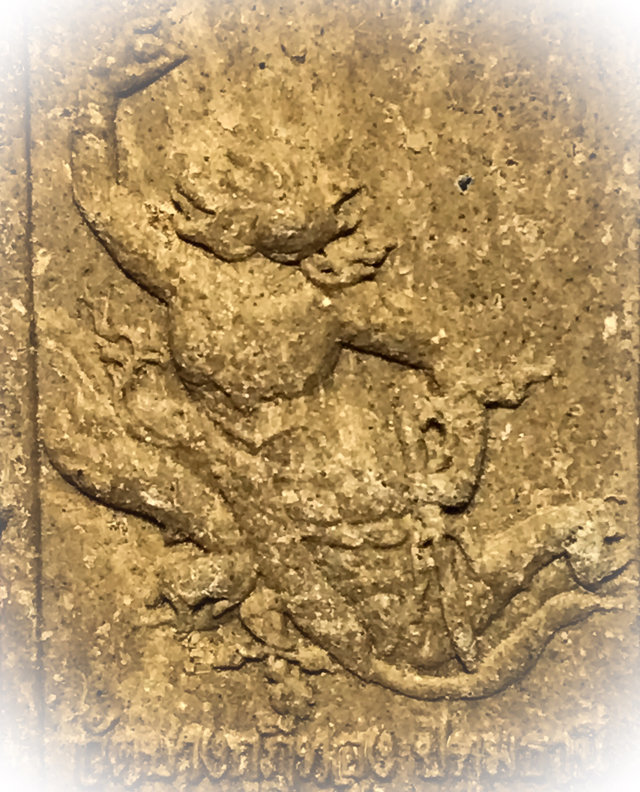 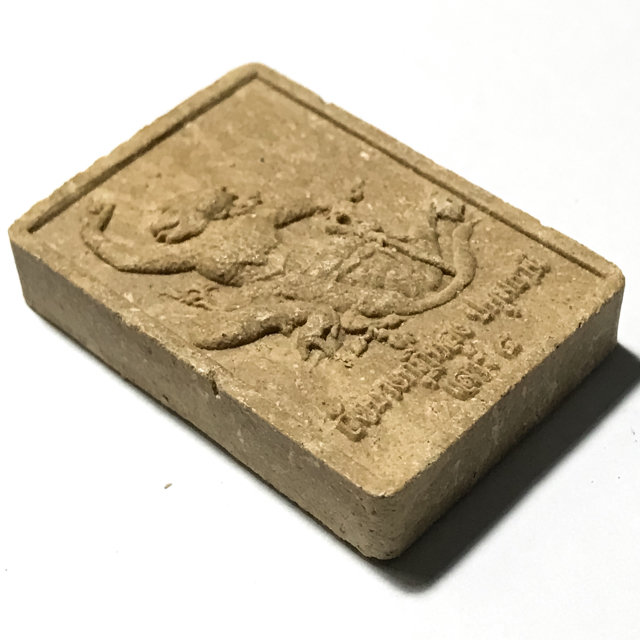 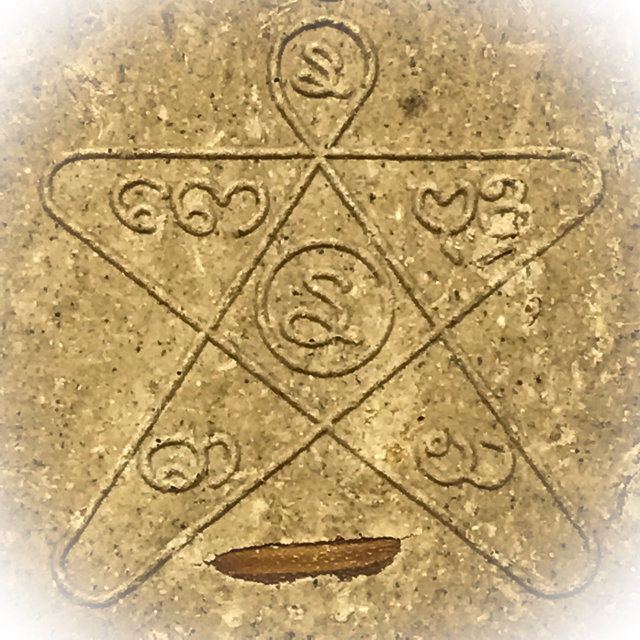 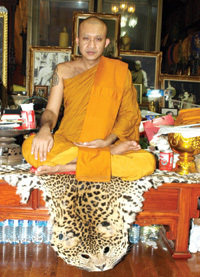 He has received immense popularity from his large congregation of Devotees around the world since quite a young age, and his Magical Prowess and Dedication to the creation of 'Pra Anuraks' type Buddhist Amulets, which preserve the traditions of Thai Buddhist Sorcery and Amulet Making, and even revive half-forgotten Wicha.

His amulets are always a tribute to Thai Buddhist Arts, and made from the finest Sacred Ingredients, with Immensely Sacred Blessings and Ceremonies.

His amulets are extremely popular for their power to bring success, and are revered around the whole world by devotees. Luang Por Chamnan became the 5th Abbot of Wat Bang Kuti Tong in the year 2541 BE, after being the Vice Abbot since 2539 BE. 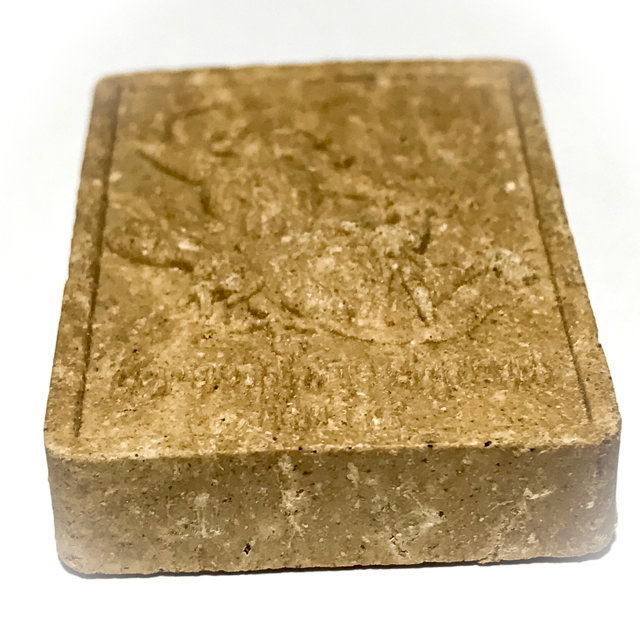 Luang Por is a descendant of the Mong Hill-tribe People who setteled in the Nakorn Pathom district centuries ago. Luang Por Chaman first ordained as a Samanera Novice Monk at the age of 14, and remained Ordained until his raising of status and further Ordination as a fully fledged Bhikkhu, eventually becoming Abbot of Wat Bang Kuti Tong. In olden days, the temple was called 'Wat Bang Kuti Mon' which meant 'The Temple with Mong Tribe Kuti Huts'. 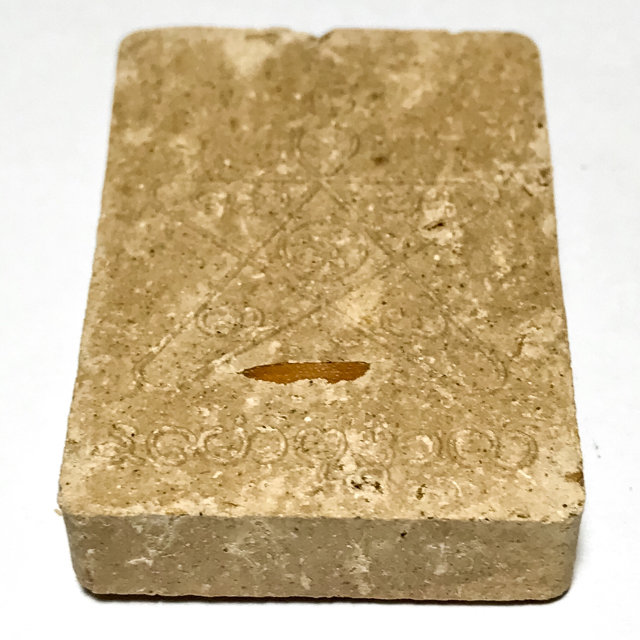 Luang Por Chamnan has always given refuge and assistance to his devotees, who come from around the world to pay reverence, and his understanding of the Mong Tribe folklore and Cultural ways has made him an Extremely Important Kroo Ba Ajarn of the local Mong Folk of Nakorn Pathom. He has studied and mastered a Plethora of Magical Wicha, be it Thai, Khmer or Thai Lanna Sorcery, his prowess is incredible. 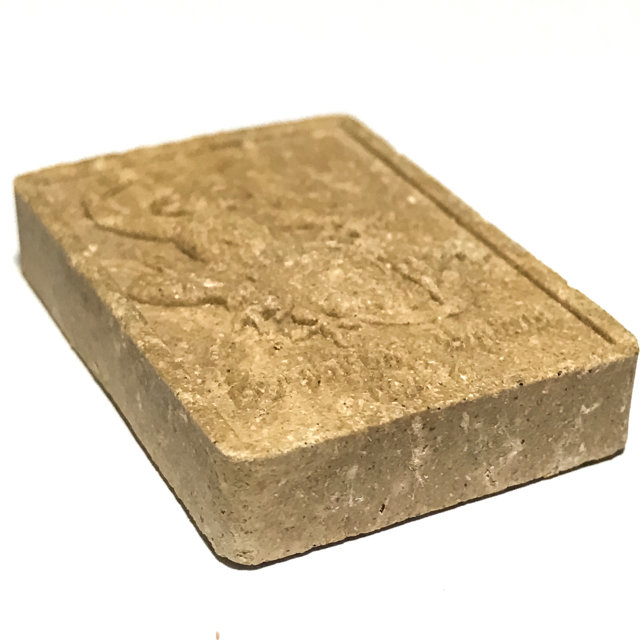 He found many Masters who bestowed their Magical secrets upon him throughout his life since a very Yung age, and reached Adepthood very early in life. He inherited the Wicha of Luang Phu Surin (Wat Bang Kuti Tong), who passed it down from his Kroo Ba Ajarn Jao Kun Raman Muni, of Wat Bang Luang (who was also the Kroo Ba Ajarn of Luang Por Tian at Wat Bote). It was Jao Kun Raman Muni who was the Master of the Wicha Pra Somdej Sip Sorng Nak Gasat '12 Kings' amulet, of Great Fame. 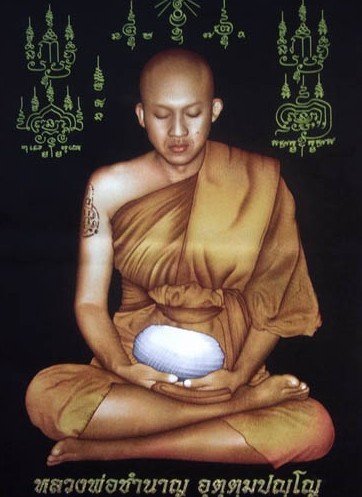 Luang Por Chamnan also received Wicha through the Lineage of Luang Por Jong (Wat Na Tang Nork), and Mastered the Wicha Bao yant Prohm See Hnaa 4 faced Brahma yantra blowing spell, which he learned from a Lay Sorceror of Ggat renown. His Brahma Wicha amulets are famous the world over for their power to instigate increased Business success, attract clients and turn an unsuccessful tendency into a successful one. 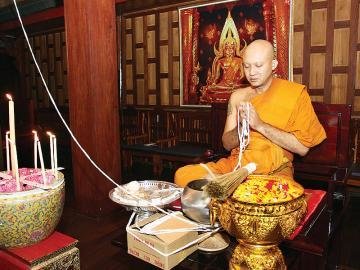 Luang Por Chamnan also learned Wicha from Luang Por Chaem of Wat Tan Gong, and mastered the many spells through his lineage. It is said that he learned his famous Brahma Yantra blowing spell from Ajarn Perng Samnak, a direct Wicha Inheritor of the Great Luang Phu Sukh of Wat Pak Klong Makham Tao, in Chainat.

He received Wicha of the Ayuttaya Masters through Ajarn Heng, and went on to seek the Wicha of a total of 5 Great Magical Monk Lineages; 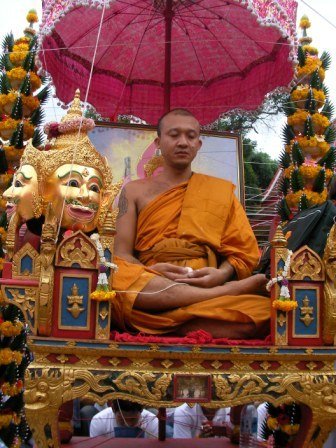 After Luang Por Chamnan had accumulated all of these Wicha, he was instructed by his Kroo Ba Ajarn to begin to practice the Piti Bao Yant Pra Prohm See Hnaa 4 faced Brahma yantra blowing Ceremony every year, which he has maintained the practice of since the year 2544 BE to the present day. The ritual is performed on the auspicious astrological occasion each year at Wat Bang Kuti Tong.

Luang Por dedicates himself to not only his own temple, but travels to many other temples to bless amulets, which he sponsors in his name to assist poorer temples in need, and for auspicious Buddhist projects. He releases amulets which are some of the finest miniature Buddhist arts to be found in this day and age, and his Blessings and Empowerment is highly regarded by Thai people and Foreign Devotees alike. A very popular Master in South East Asia, with thousands of Devotees in Singapore, Malaysia 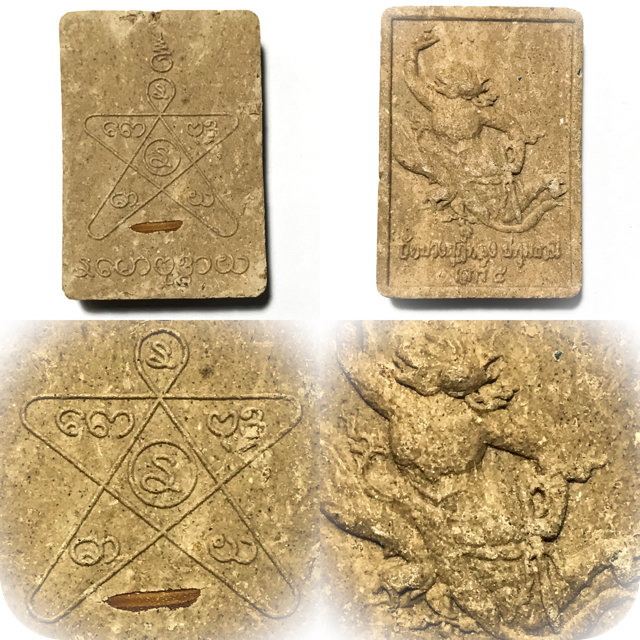