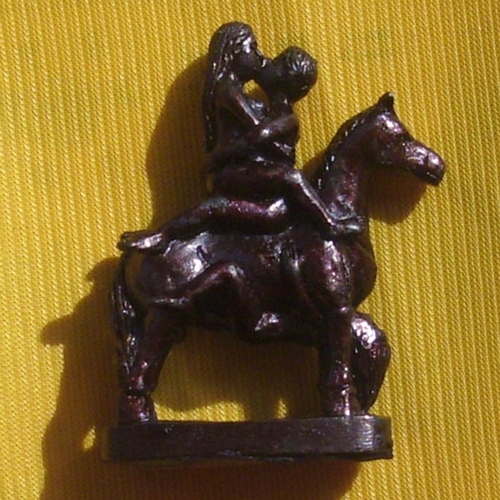 In Koo Deity and Ma Sep Nang Love charms two in one Thai Animist amulet. The In Koo Maa Sep Nang is a Sexual Love Charm for both Men or Women - Apt for Gay people to use as a Love or Sex Charm. Made by Luang POr Goy of Watb Khao Din Dtai in Buriram. Famous for both his great Humility as well as for his powerful Khmer Lineage Magic.

Piti Puttapisek Blessing Ceremony
The sacred Yantra and Prai powders were taken and placed together, and empowered with Piti Sagod Yaan ceremony to invoke the Deity to abide within the metals and powders to be smelted together. The shape of the In Koo Ma Sep Nang Phadej Seug was then fashioned in the shape of a horse with a woman and man in symbiotic embrace (In Koo - a Deity similar to the Tibetan Yab-Yum) riding out into battle. Another female is under the horse in embrace.

The statuette has a hollow base which was stuffed with 'Pong Nang Ok Dtaek' (broken hearted woman powder), which has incredible power to attract and enchant the other sex(and those who are inclined others of the same sex).

This special powder has had the spell chanted and cast into it until the Deity arose and appeared as a Beautiful Maiden. Many Thai Sacred amulets are empowered this way, some amulets flying out of the container they are sitting in and floating in the air, others, as in the case of this amulet, will have an apparition of the Deity who will reside within the amulet. The Tagrud Paya Te Krua were empowered and inserted into the sacred powder in the base.

Then Luang Por Goy took the amulets in his Kuti and made meditative empowerments during a whole three month period (Dtraimas Empowerment).He chanted and meditated on them until he saw the image of a man and woman embracing rise up from the amulets. he did the ritual to invoke the In Koo Dtua Phu and IN Koo Dtua Mia (male and femal emanations of the Deva), and make them approach the Ma Sep Nang (horse with woman), and then empowered them all once bound together using the Kata Chang Pasom Khlong, Kata In Koo Piswas, Kata Maha Sep Nang 108 Pitsadarn, Kata Paya Hongs Tong, Kata Metta Yai Kata Piswas Hlong Hlai, Kata Ma See Hmog, and Kata Maha Sanaeh. He then gave ultimate empowerment with the spell for Ma Sep Nang and In Koo Piswas.

The amulet is a powerful Sanaeh Charm for whoever wears it, be it make or female. The amulets were finally soaked in Nam Man Sanaeh (Sacred charm oil/metta oil with chang pasom khlong, nam man piswas jao choo, nam man naree rampheung and other powerful love charms)..

This amulet is a very popular amulet with the Gay Community.