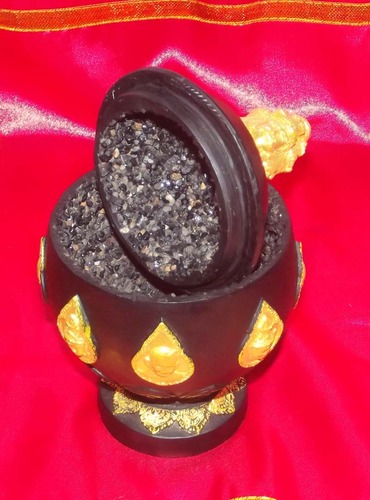 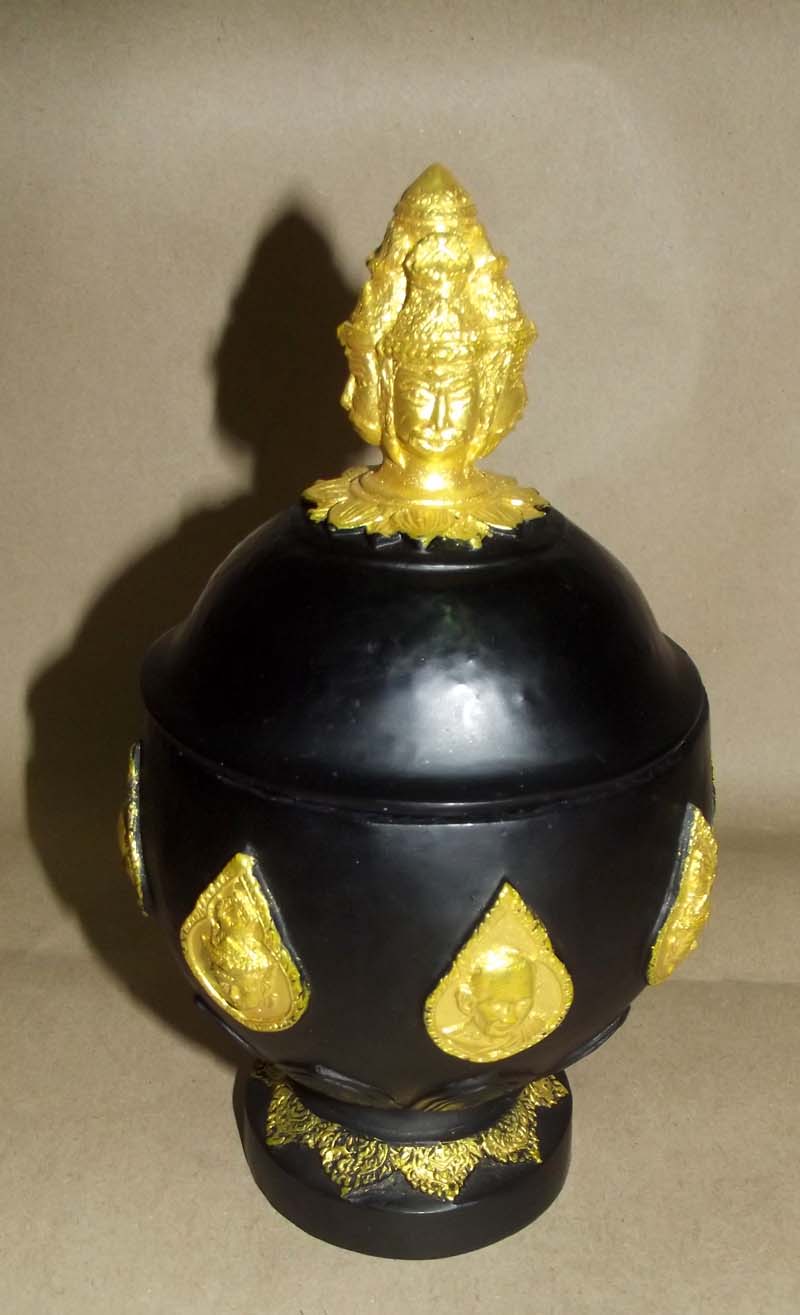 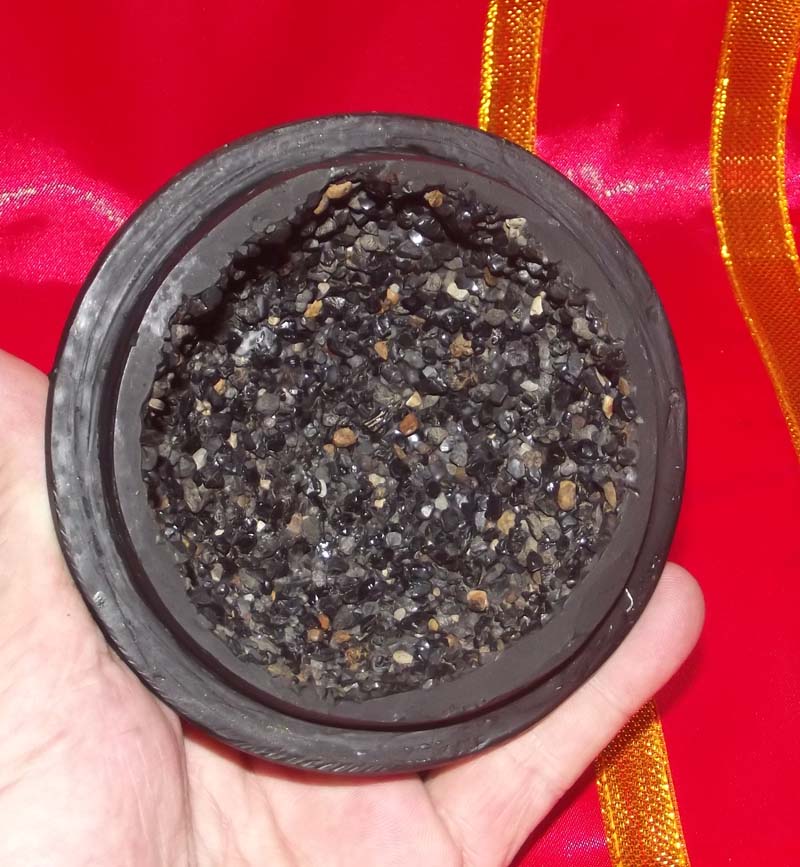 The inner surface of the Khan Nam Montr is covered with a rich mixture of sacred muan sarn powders, minerals and relic crystals, which has been sealed into the resin surface of the prayer water bowl. 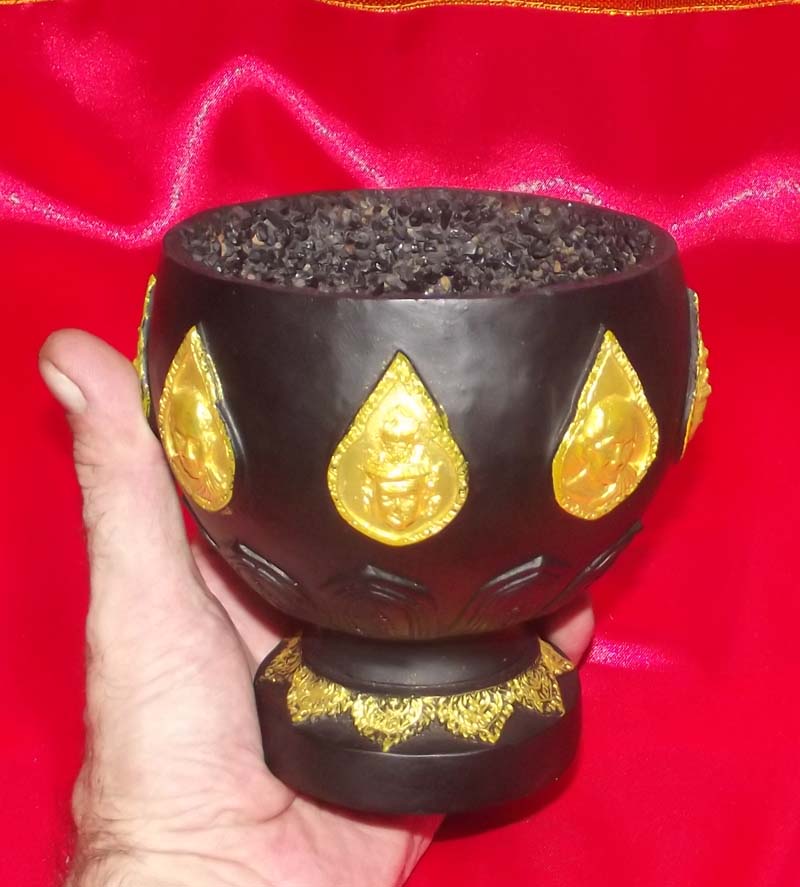 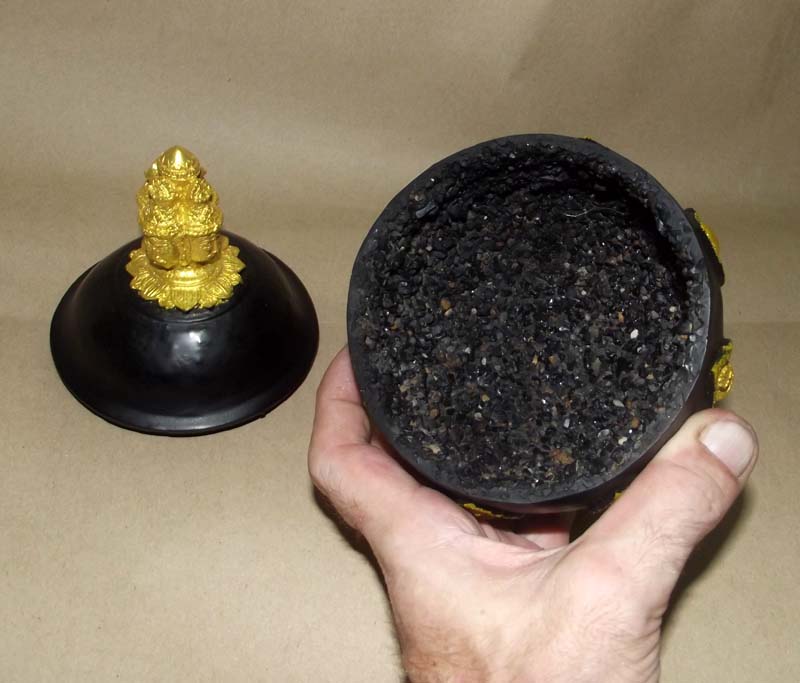 This Ritual/Ceremonial item provides the Practitioner and Devotee with a method for making a never ending supply of magical and holy blessings in the form of water for spraying on oneself, others, items you sell in your shop, vehicle, and home. The water when made using the various Wicha which are possible to apply, can provide all types of Master Blessings, ranging from Metta Mahaniyom and Maha Sanaeh, to Kong Grapan and Klaew Klaad protection. Thje Brahma Deity is in Nature pure Metta, Maha sanaeh, and also Wards of Black magic, which is one of the prime purposes of sprinkling prayer water.

Empowered during the three month rainy retreat in Traimas Wicha tradition, recieving Nightly Empowerments for the whole three months,before being finally empowered in major Puttapisek/Taewapisek ceremony as a final blessing.

You can make prayer water in a multitude of ways.

Making Water by Prayer and Incantation - By lighting incense, candles anmd giving offerings, and then performing preliminary prayers, and then Incantations (Kata Chanting), whilst focusing on the Prayer Water. The opbject of the chanting is not only to magically activate the prayer/holy water, but also to generate an increased focus (Samadhi) in the mind of the practitioner, which in turn increases the psychic effect of the empowerment process in an evcer increasing scale as the practitioner becomes ever more fluent with repeated practice.

You can also use sacred items such as magical substances, or amulets to empower the water within the Khan Nam Montr.

In the case of Khan Nam Montr which are designed and empowered with a particular Deity, such as Brahma, Vishnu, or Pra Upakut Buddha, then you can use the commonly used incantations and Bucha methods for that Deity , to make a specialized form of Prayer water which carries the qualities and blessings of that particular Deity. You can however with such items also make other forms of prayer water, with the exception of any kinds which may disagree with the innate nature of the Deity present within the Khan Nam Montr 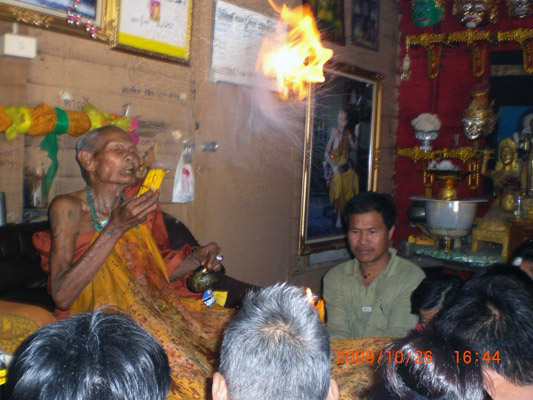 Luang Phu Nong Tammachodto is the true Nephew of Luang Por Derm (Wat Nong Po) and recieved direct Wicha magical training from his Uncle. Luang Por Nongs amulets are both powerfully made according to the Wicha of Luang Por Derm, as well as having been designed and created by some of Thailands finest Buddhist and Brahman artistic craftsmen. A perfect combination of powerful sacred Buddha Magic and Beautiful aesthetic Religious Art.