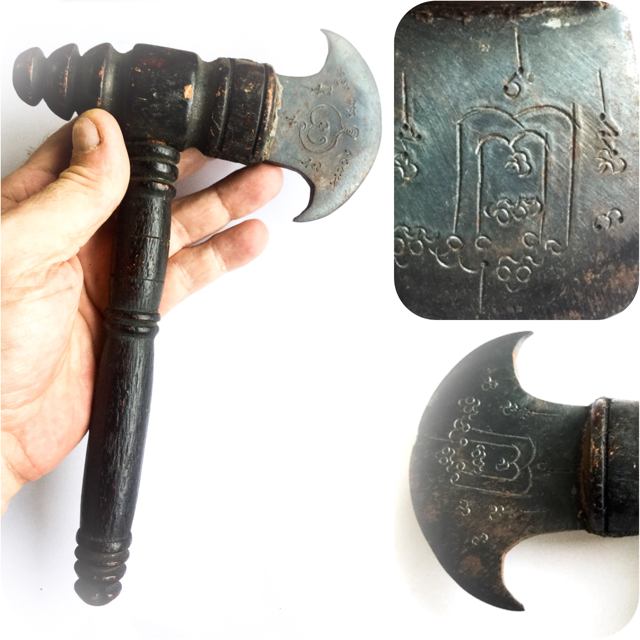 This Ritual Sorceror's Axe is a single item which was blessed and empowered by the Great Luang Phu Hongs Prohmabanyo, of the Sussaan Tung Mon Cemeterial Forest Monastery (Later 'Wat Petchburi), in Surin. 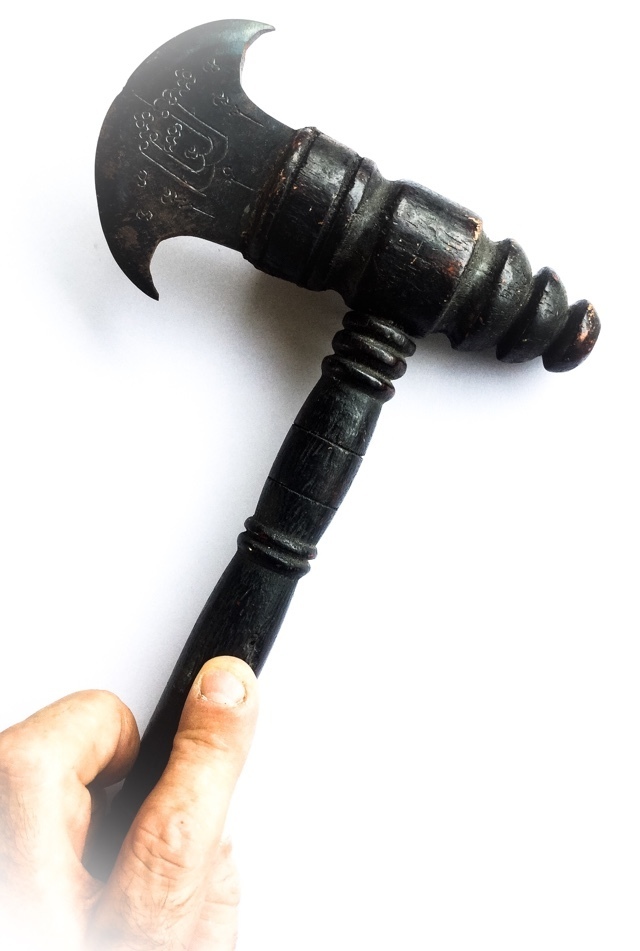 Now deceased, Luang Phu Hongs is one of this Century's Great Sorceror Monks, with devotees around the world. Immensely revered on both the Thai and Khmer sides of the border, Luang Phu Hongs is known for his ability to cast spells of Kong Grapan Chadtri and Klaew Klaad, and immensely powerful Metta Maha Niyom Mercy Charm Magic. His power to douse out Black Magick and Evil Sorcery is also highly respected. 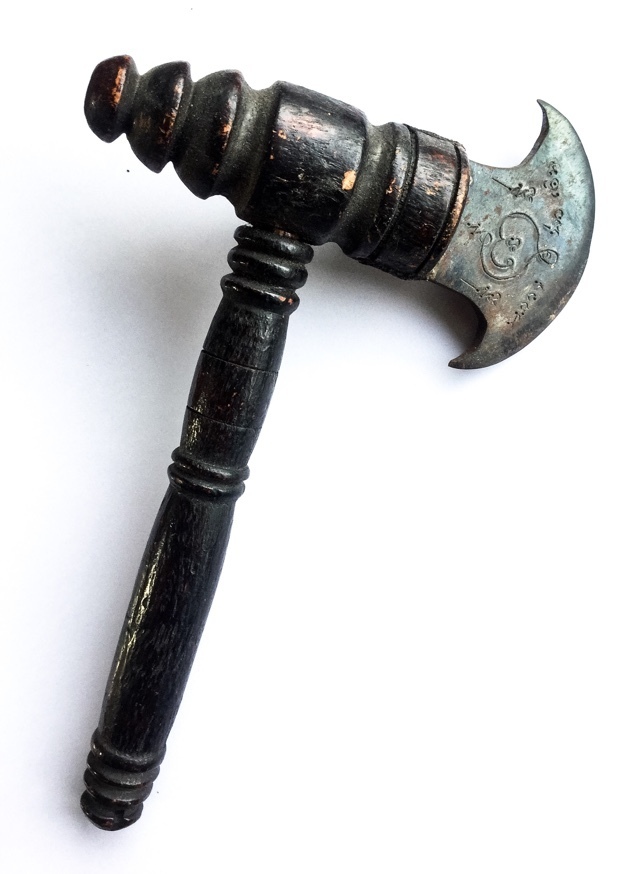 The axe is not only an extremely powerful Ritual Weapon, but also equally apt for Bucha on the Altar. It emanates powerful Gae Aathan Magick to inhibit and ward off any Black Magick or Ghostly Influences, and bring Maha Lap Wealthy Blessings in addition. When used to bestow Kong Grapan Chadtri Blessings on devotees, the axe can invoke Invincibility Magic, and can also be used to Invoke Metta Mahaniyom Mercy Charm for good Business and Convince others to show Favours. 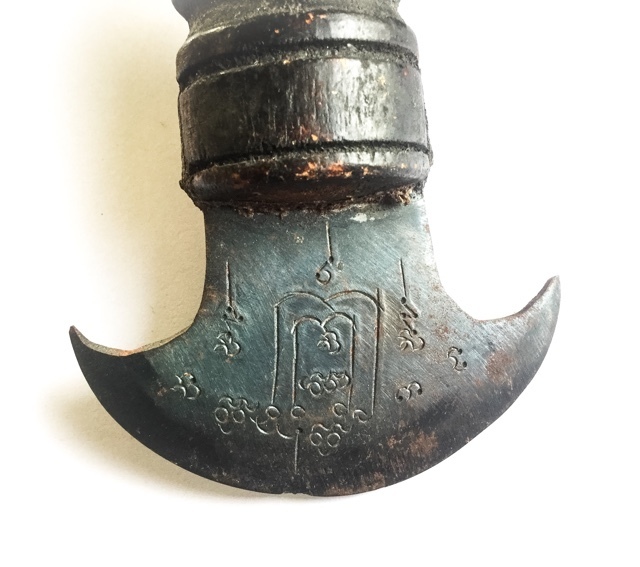 The Khwan Akom Gae Aathan is also a rare treasure for collectors of the amulets of Luang Phu Hongs, and indeed, collectors of rare Ritual Occult Weapons, and practitioners of Occult Magick. The Blade of the axe is inscribed with Sacred Yant and Khom Agkhara. 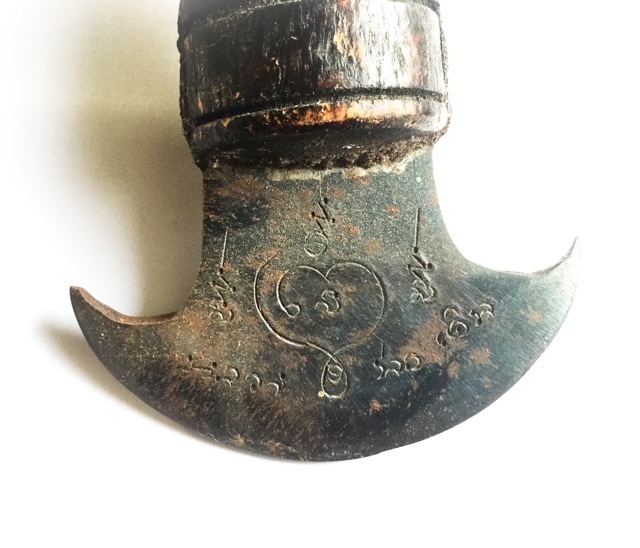 The blade itself is honed from lek Nam Pi, a sacred magnetic metallic element which is used in the forging of Achemical substances for Ritual Blades, which is dug up from the region of Uttaradit, where this substance is found under the earth, and sifted for the purpose of making magical alchemical metal alloys for Ritual Blades and ancient War Weaponry. 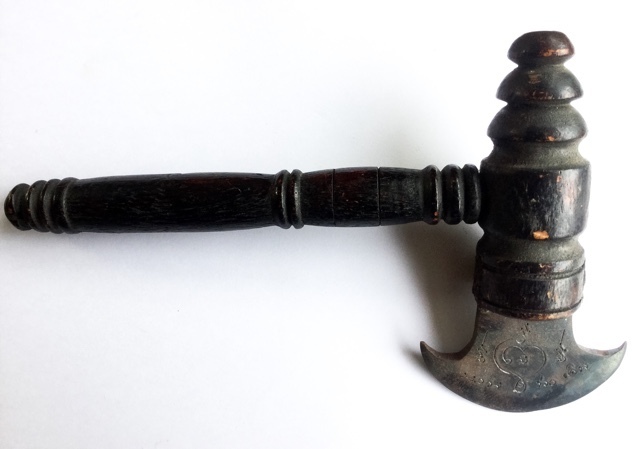 Luang Phu is now a Deceased Master Monk, whose amulets are now disappearing as his devotees collect and keep them at a constantly increasing rate. Luang Phu Hongs is a Master Gaeji Ajarn with masses of Devotees from around the World, and enjoys a welcome reception from local Devotees on both the Thai and Khmer sides of the border. 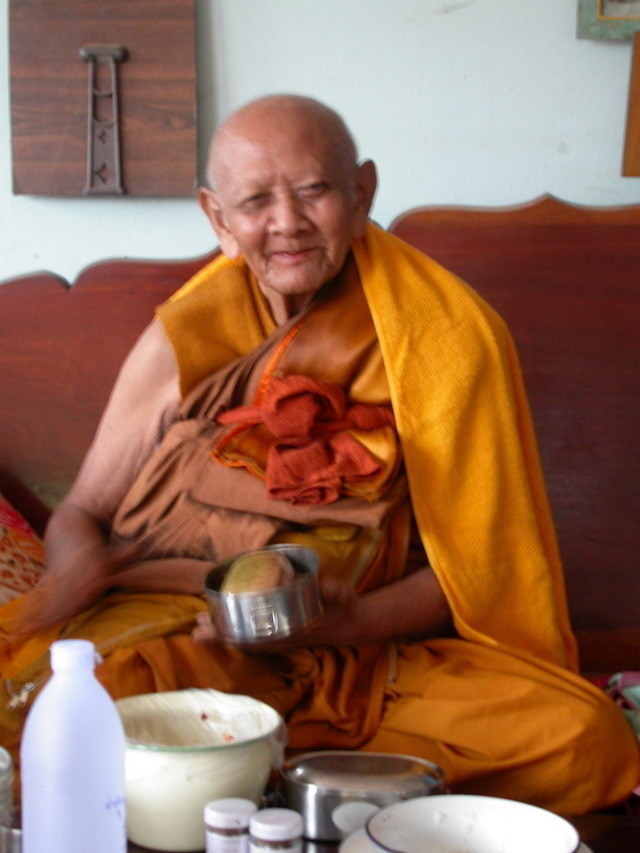 There was a famous occasion when Luang Phu Hongs revisited the township in Cambodia where he had once stayed in the forest on Tudong, and prevented a bomb from exploding and destroying the houses, where Cambodian believers laid down in the street to form a human road for him to walk on. He tried to back out of it but the devotees insisted. This was because of a miracle which occurred with their village being bombed as LP Hongs was meditating close by in the forest, and the bombs did not go off. 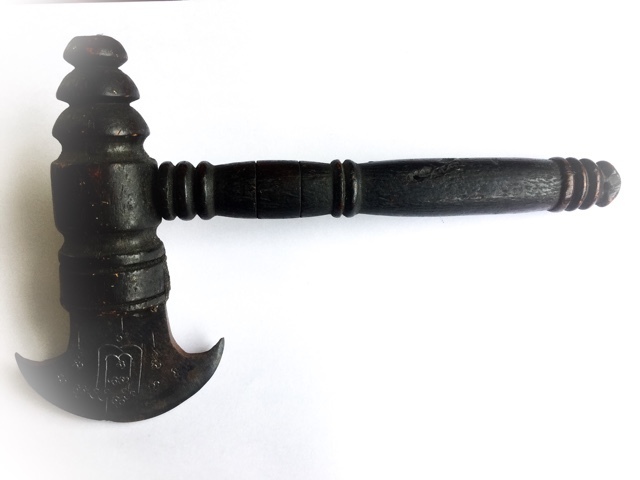 LP Hongs has learned many Wicha over the decades on his Tudong travels through Thailand, Laos, Cambodia. News of his Merits and the powerful effects of his amulets has travelled to other Nations. Luang Phu Hongs has a very large following of Singaporean, Taiwan and Hong Kong devotees, as well as many Westerners. 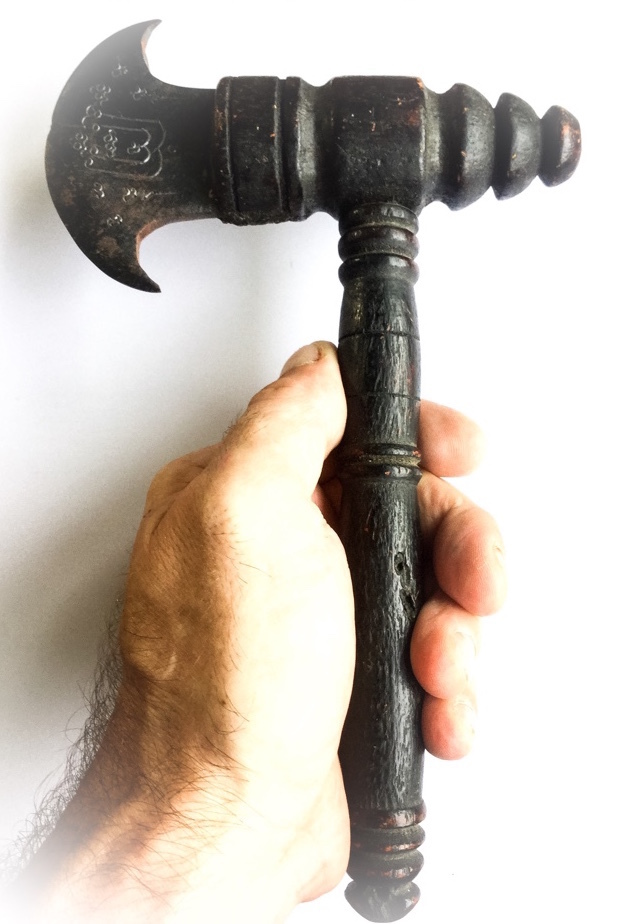 His Many Great Attainments, have made Luang Phu Hongs an Internationally Acclaimed Name, not only for his Mastery of Sorcery, but for his Diligent Practice, Accomplishments in his many Works of Restoration of Temples, and Material Renunciation in is own lifestyle. 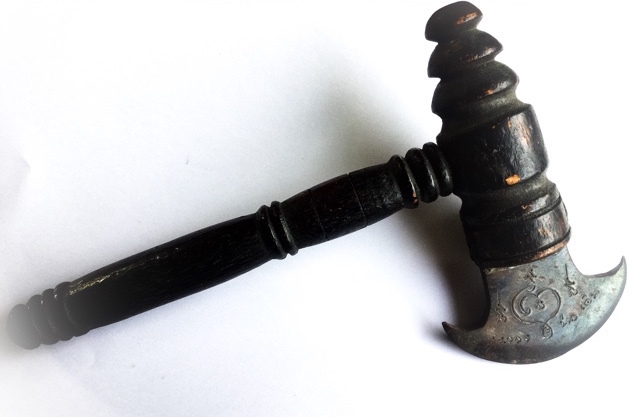