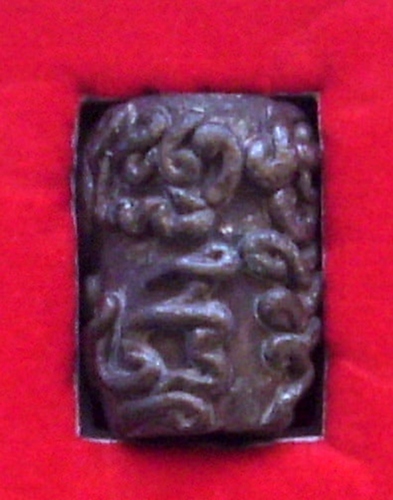 Look Sagod are magical Talismans for protection and other purposes (such as attainment of riches being the main purpose in this Pokasap amulet, by Luang Por Pian. The Look Sagod were empowered on the Maha Waet day of Saor Haa, as well as another four occasions where Puttapisek blessing ceremonies were performed on the amulets.

Released along with other amulets of the Maha Mongkol Pokasap editon, this Look Sagot was one of a range of amulets made in less numbers, which are more Magically influenced, for those who like to actively work with magic amulets. The Look Sagod is worn on a belt like the Tagrud, and can even be used to place in the tube of a Tagrud one each end of the Tagrud scroll to amplify the power, as well as to protect the magic from escaping or being attacked by other magic spells. The Look Sagod are also used in various Ritual practices in Kammathana Buddhist Meditation and amulet empowerment, as well as in the making of magic spells, so it can be considered both an amulet, as well as a piece of Ritual Paraphernalia.

This particular Look Sagod is both for Protection as well as Maha Lap and Pokasap (good fortune and wealth). It is covered with Sacred Khom Agkhara forming Yantra and magic spells written over the surface of the sacred empowered metal of the Look Sagod Talisman.

Luang Por Pian is one of the Last of his Generation of Guru Monks, and carries a powerful and long lasting lineage of Magical Wicha with from from Ancient Masters who taught their science to their Looksit over hundreds of years, so that the magical helpers which we in Thailand are so used to having available can still be made by Masters like Luang Por Pian, and still be used to improve our lives right up to the present Modern Age. His Wicha are many, but his Meed Hmor and Hanuman effigies as well as Tiger related amulets are amongst the most popular in Thailand as far as modern amulets are concerned. His magical powers are unquestioned in Thailand, and his amulets are made remaining faithful to the 'Old School' of thought, using ancient formulas and ingredients as well as the traditional empowerment methods. LP Pian is truly an old Master with decades of practice behind him, who has developed his psychic empowerment ability to a finely honed skill, and is currently the Kroo Ba Ajarn of many New Masters who we are already hearing about, and who will one day perhaps become great 'Gaeji' Masters in their own right.