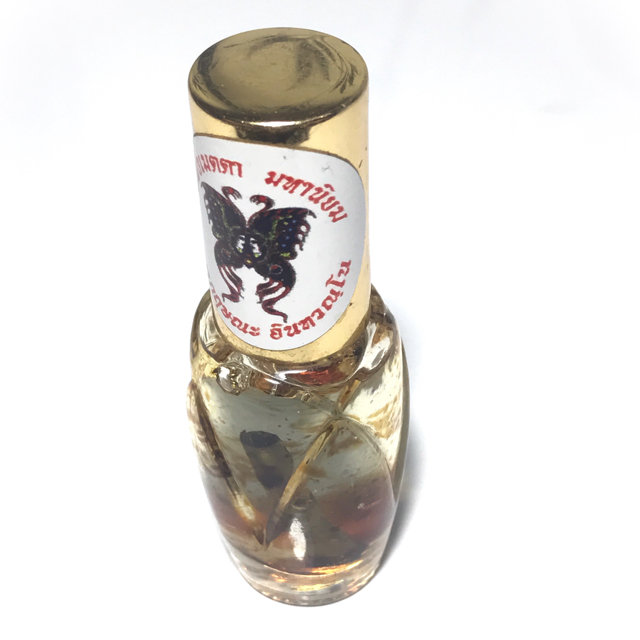 Butterfly King/Dancing Deva magical oily enchantment potion, and mercy charm, from Kroo Ba Krissana Intawano, of Samnak Songk Weluwan, in Buriram. Blessed with the same empowerment used for the Taep Jamlaeng Butterfly King Amulet. Because of long term immersion in the oil, some oily residue has occured from the silver Takrut reacting with the oil. 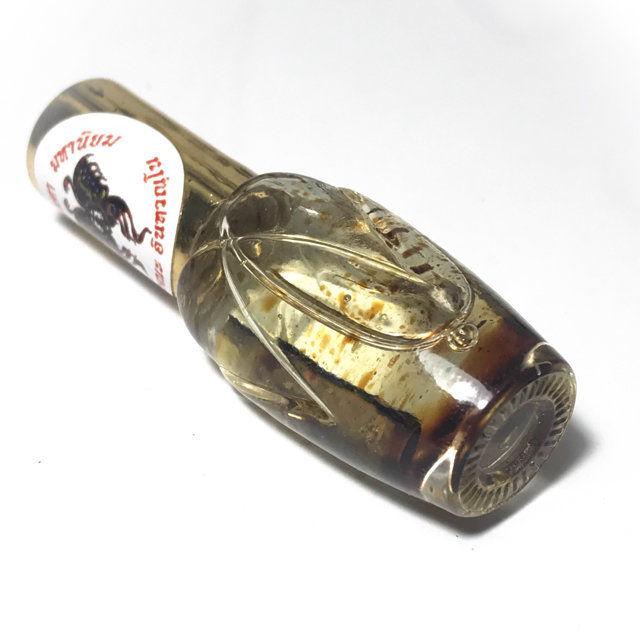 The Nam Man Taep Jamlaeng was released in this edition in the year 2555 BE, an been made using the very ancient sorcery methods of the Wicha Teerayan. The oil is safe for smearing on the skin. Many kinds of these balms and potions cannot be applied onto the skin, because of their necromantic nature. But this is a purely herbal and non-necromantic potion, which carries absolutely no Karmic retributions or disadvantages, rather, only auspicious blessings.

Hence, the traditional application and usage methods given from the ancient formulas for applying See Pheung and Nam Man Prai Oils, such as onto your eyebrows, forehead, and the like, is able to be implemented with this particular potion. 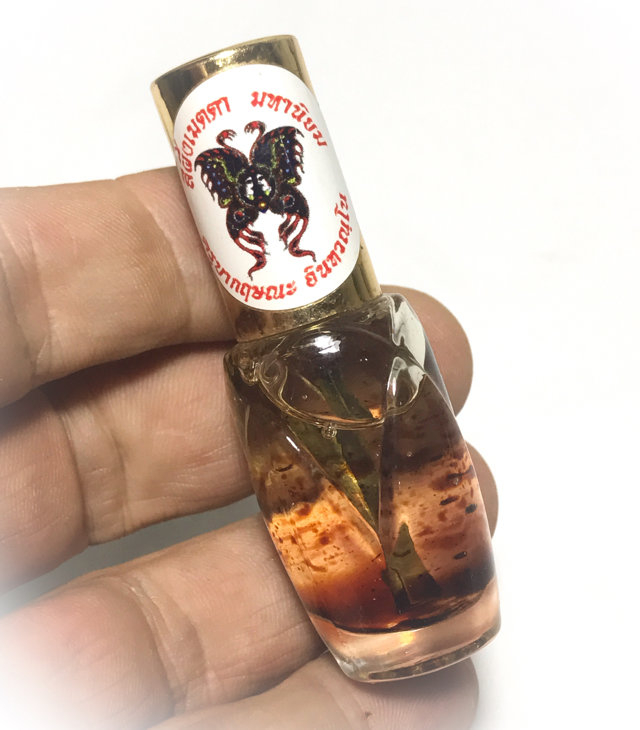 The Nam Man Taep Jamlaeng Taep Ranjuan is empowered for the effects of instilling popularity and generosity onto the owner, as well as increasing luck in business and trades.

Inside is a generous amount of Metta Oil, which is further empowered with the insertion.One can use the potion to dap on oneself for great charm, attraction and popularity as well as advancing in business propositions and trade. 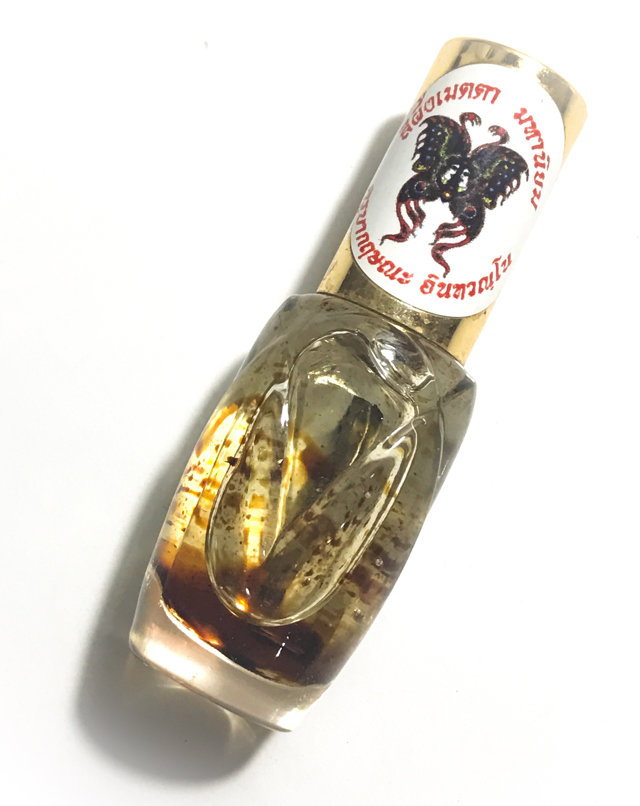 Use the forefinger to smear with almost all Metta and Maha Sanaeh Oils and Balm Potions, for General Metta Blessing, use the ring finger for Selling and Gambling, use the middle finger to smear the oil if you wish to be attracting the opposite, or even the same sex. Kroo Ba Krissana Intawano spent the whole three month period of the rainy retreat, empowering this edition of Amulets every single day. 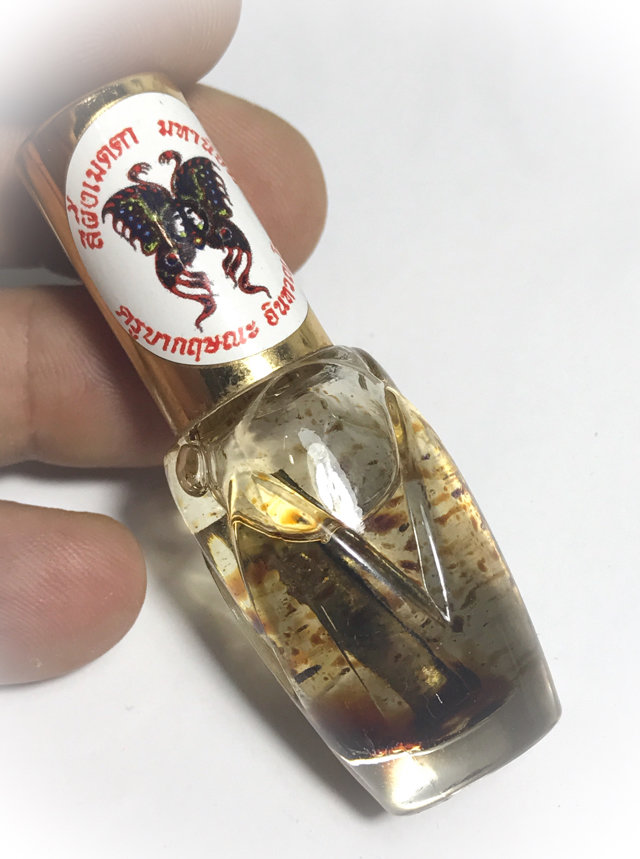 During this time, he entered into a period of solitary Kammathana practice in order to empower the Amulets with the highest power through great renunciation and practice of purity for a sustained length of six days solid meditation!!! The sacred Muan Sarn powders, oils and other ingredients used in the making of the various amulets released in this edition, were amassed together for the great Puttapisek ceremony, and under masterful eyes to ensure that the ritual followed exactly as prescribed by ancient Wicha knowledge. 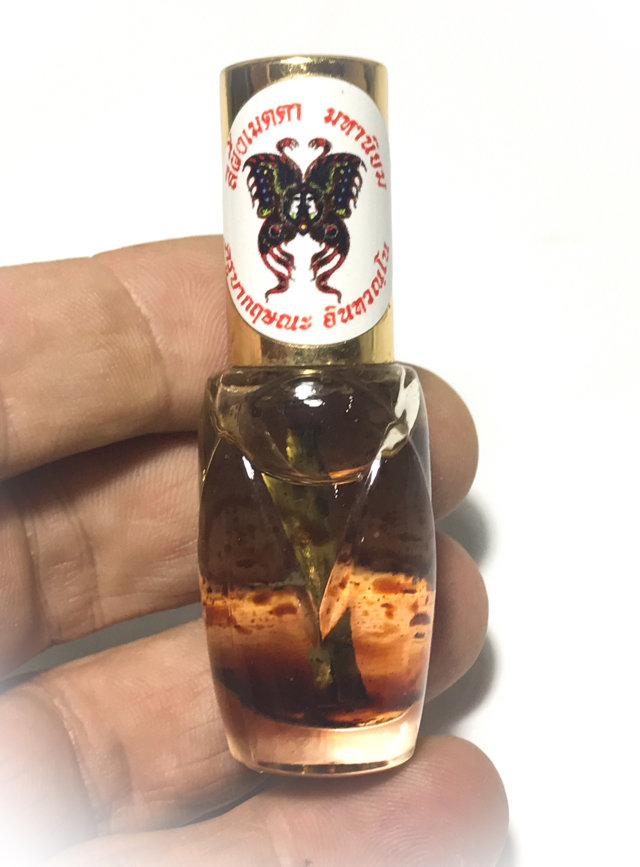 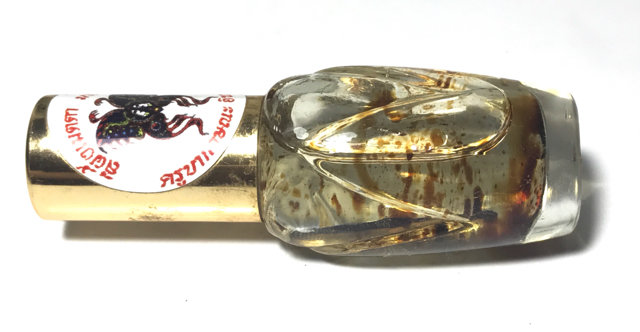 The amulets of this great internationally famous guru master, go unrivaled, as far as their beauty and fine quality of handmade artisanry is concerned. After their room mans compassionate and continuous flow of Metta Mahaniyom, Maha Lap, and Maha Pokasap magic, his amulets are also said to go unrivalled with any other in the present era.

How to use See Pheung & Nam Man Prai oils

Kroo Ba Krissana Intawano has given precise instructions of his method for using his Prai Oils and Metta Balmswhich you can listen to translated by Ajarn Spencer in the below pod cast. 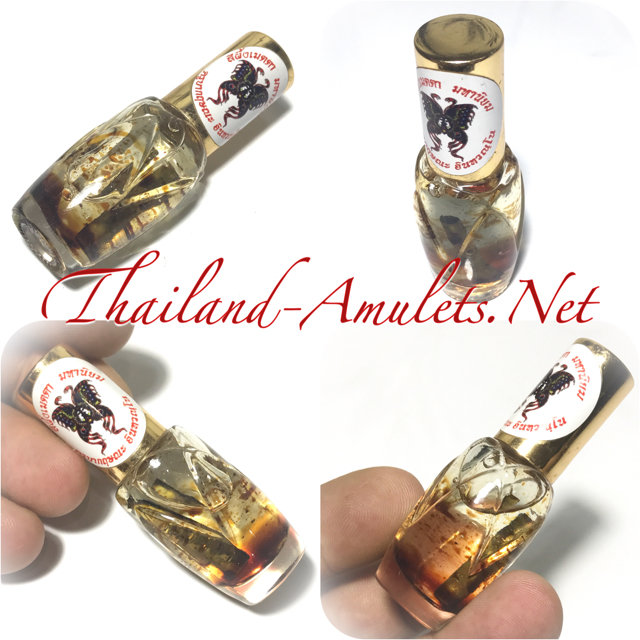