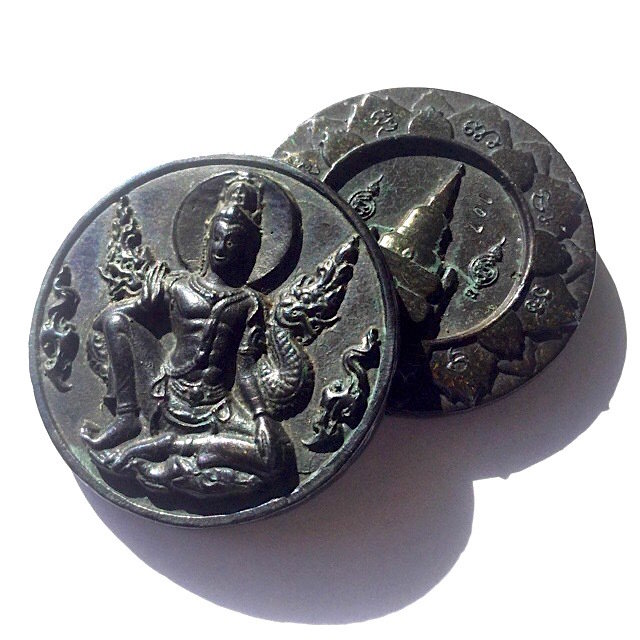 These Sacred Naga amulets measure 5 cm wide in diameter, and were blessed in 2549 BE in the Saan Hlak Mueang City Pillar Shrine in the heart of the town of Surat Thani, with Luang Por Prohm of Wat Ban Suan performing the Administration of the Buddha Abhiseka Blessing Ceremony. This amulet was a limited series, and has become a highly prized and sought after amulet by devotees of Luang Por Prohm and the Southern Khao Or Lineage Masters. 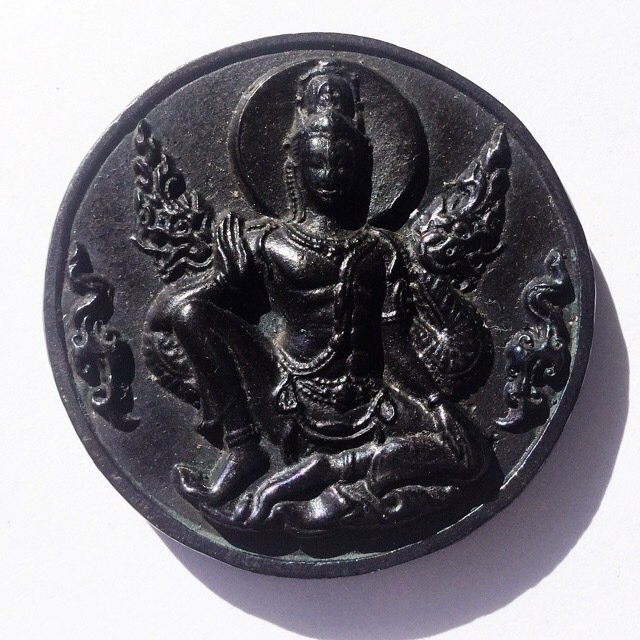 The amulets were empowered with masses of Incantations and the Ancient Invocation of the Mujarin Naga King Deity, in a Highly Sacred Ceremony of the Khao Or Lineage Tradition, to empower this most rare to find Dety Invocation, of the Ancient Pantheon of the Srivichai Era, where Vedic Gods were Eminently present in the Southern Kingdoms of Nakorn Sri Tammarat in Ancient Siam. 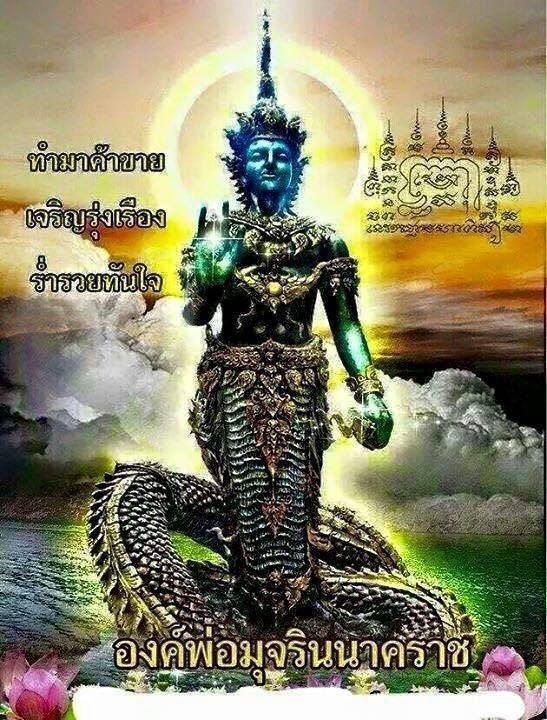 The posture of the Mujariin Naga King, is reminiscent of the Jatukam Rama Taep Bodhisattva King Deity, with one leg raised up from his throne in readiness to assist Humans and Living Beings to rise above Suffering. This is the sign of a Bodhisattva, whose sole sequence of actions in the world are made through compassion This amulet is made from Nuea Maekapat, with an incredibly high quantity of Lek Lai See Peek Malaeng Tap (Purply-Blue Lek Lai) in the Alchemical Mercurial Admixture. Maekapat Metal is a Magical Metal Alloy made using Ancient Alchemy Formulas. This amulet is forged with Ritual Casting Ceremony made in Nuea Maekapat, one of two similar Ancient Alchemical Alloys used for Sorcery, the other being 'Nuea Maekasit'. 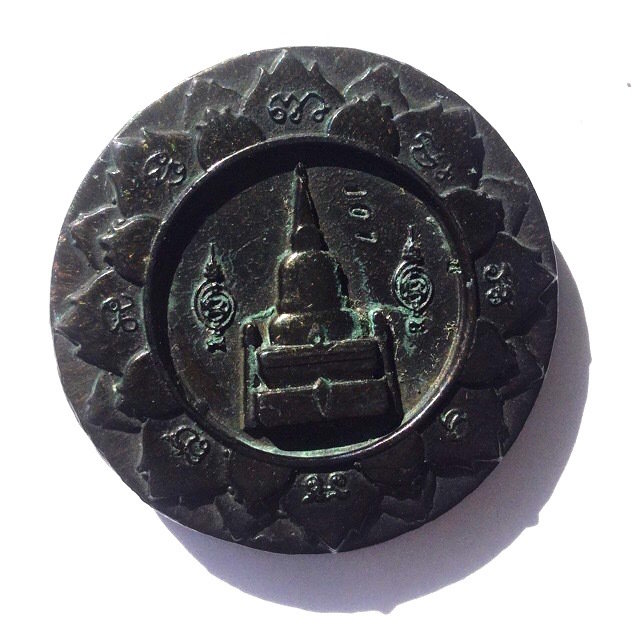 These metals are obtained by Alchemically smelting Iron Artifacts, with Mercury as the main base Magical ingredient, and performing Elemental Invocations until the structure of the metal changes, and becomes a sacred Metal of Alchemical Nature. Alchemy and Metallurgy are combined here as one facet of the various aspects of empowerment of the amulet. The Maekasit, and Maekapat Sacred Alchemical Metals are not only especially apt for channelling Magical Forces, but also is a preferred substance for aesthetic reasons; Namely, that the surface of Nuea Maekasit, when boiled and transformed Alchemically into its final state, takes on a reddish-black fiery tone, that is matt finish, with the interior of the metal more whitish or purplish, often looking like the interior is filled with Silvery Lek Lai. 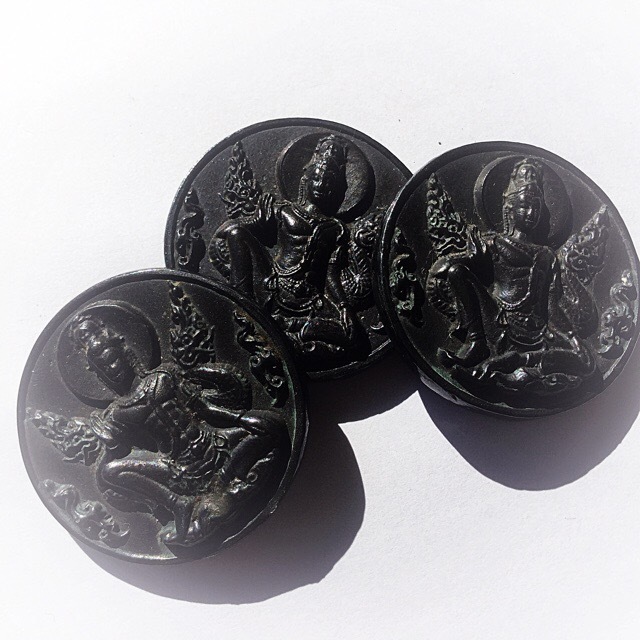 If you place the metal in water, it is often seen to change color whilst submerged, and also with passage of time, the color and textures of the metal change. 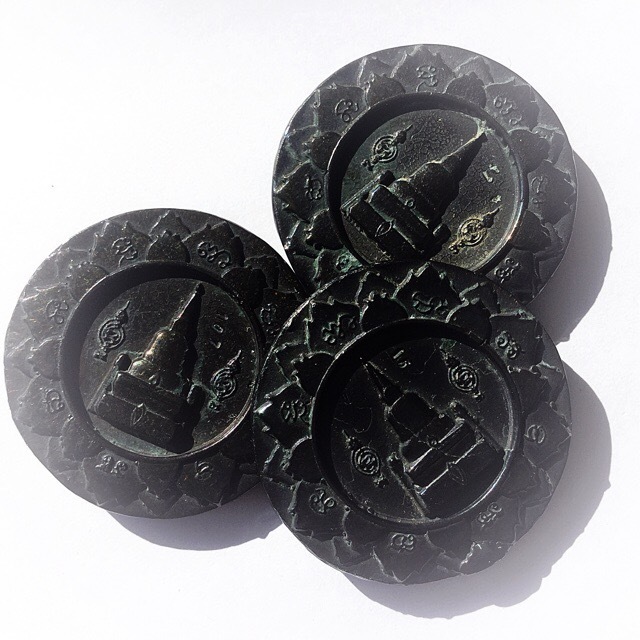 It has the reputation of being able to 'Hnun Duang Chadtaa' (improve Karma and Horoscope, Luck, Fortune, Destiny and Fate). It is also reputed to be able to forewarn of Dangers or Enemies. The colour of the metal can vary, because this is the Nature of Nuea Maekapat and Maekasit Alchemical Metals, which tends to separate in its components in certain areas, revealing different colours and sheens. This is of course also part of what makes Maekapat and Maekasit metal so beautiful. 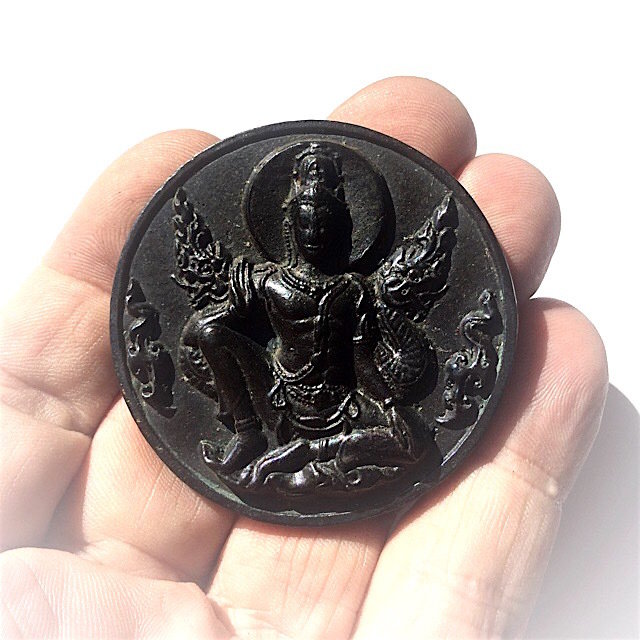 Wat Ban Suan is one of the Dtamnak Dtak Sila Khao Or Southern Academy of Sorcery Temples, and is the Home of Khao Or Magic and the Root Lineage Center of the Great Master of Khao or Magic, Luang Por Kong. Luang Por Prohm is the current Abbot of Wat Ban Suan.

Luang Por Prohm is the Looksit, and Continuation of the Khao Or Tradition, the Greatest and most Famous Southern School of Sorcery in Thailand. He learned his Wicha from Luang Por Kong directly, who was in fact also the Kroo Ba Ajarn in Wicha Saiyasart (Sorcery) to Ajarn Iad of Wat Don Sala. Luang Por Prohm Received his Lineage Mastery Wicha bestowed from the previous abbot of Wat Ban Suan, Kroo Ba Ajarn, Luang Por Kong. 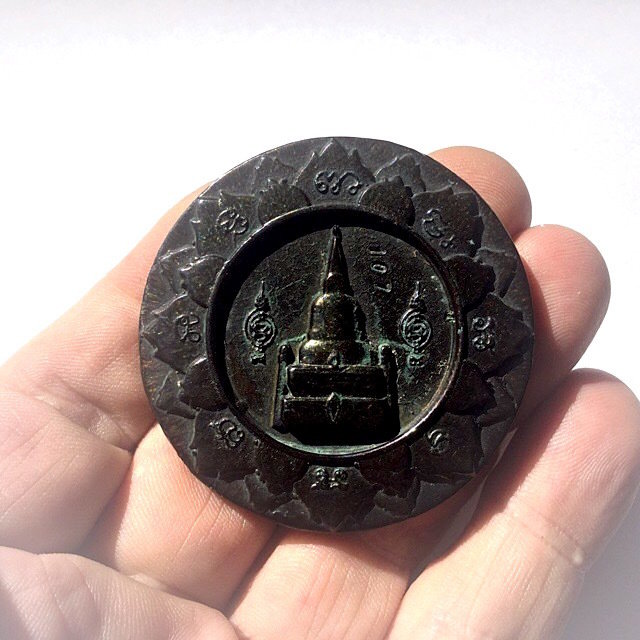 Luang Por Prohm's Wicha Are indeed many fold, For he has Mastered many different forms of magic spells, invocations, and mastery of elemental magic and forces. Developing his Psychic Powers and Practicing the path of Kammathana forest tradition Buddhism, Developing his meditative skill with the Practice of Vipassana. Luang Por Prohm Has truly mastered a large array of different forms of sorcery and ways of invoking and inviting Devas, and spirits, to dwell within the various forms of animals and Deities, and other effigies which Luang Por Prohm Has learned to master, and control. 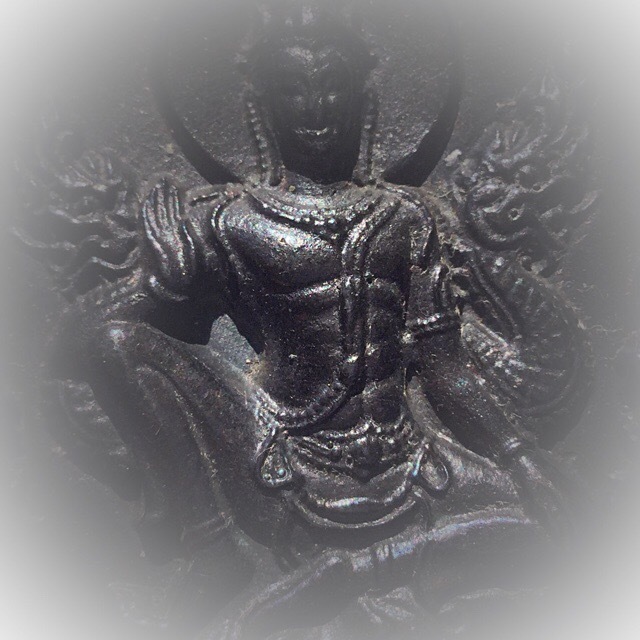 Luang Por Prohm was present and assisted in empowerments of many famous editions made by his predecessor, and of other earlier Khao Or amulets too, including the Pra Pong Kong Chai Chum Chai of Ajarn Chum, which had Ajarn Tong Tao on one side, and Ajarn Kong on the other, and is a ver famous Kong Grapan amulet from 2512 BE.

The Dtamnak Dtak Sila Khao Or Southern Academy of Sorcery, is perhaps the most famous and long standing lineage of Occult practice that is still alive and kicking to this day, and has a large array of truly adept masters under its list of members, past and present. There is no lineage more famous respected or feared for its truly powerful sorcery, as the Dtamnak Dtak Sila Khao Or. 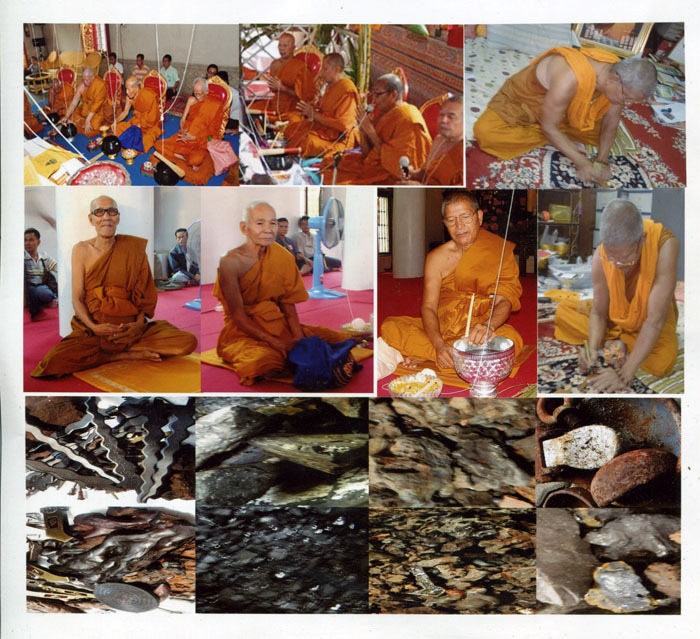 Few masters and temples these days produce not only amulets, but also release many kinds of ritual ceremonial instruments, and other kind of Talismans which serves to also preserve the ancient traditions and Wicha through the present Era into the Future. This also brings what would usually be extremely difficult items to obtain, into the hands of, and for the use of the common people, the active practitioner, and lay devotee. 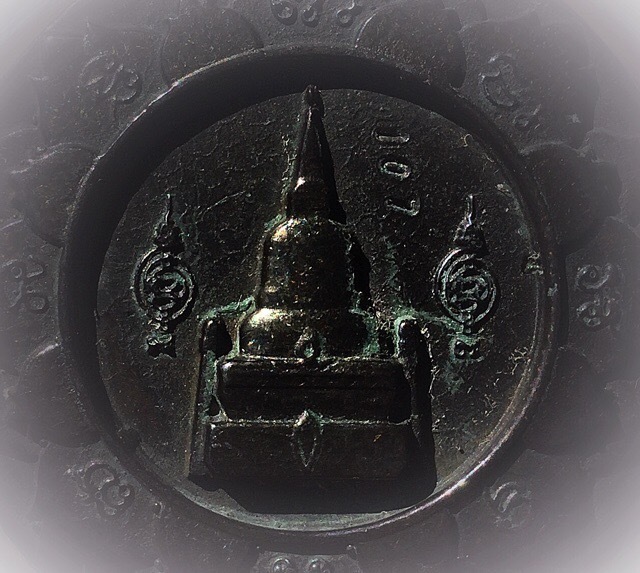 The Naga is an extremely powerful and magical being of the Bodhala Underworld, and is a Deva Being, who possesses Shapeshifter abilities, and can transform into Human Form at will. The Naga Kings are Very powerful Magical Entities, and are high ranking Deities of the Thai Buddhist Pantheon. the Naga Kings are devotees of the Lord Buddha, and Protectors of the Dhamma. 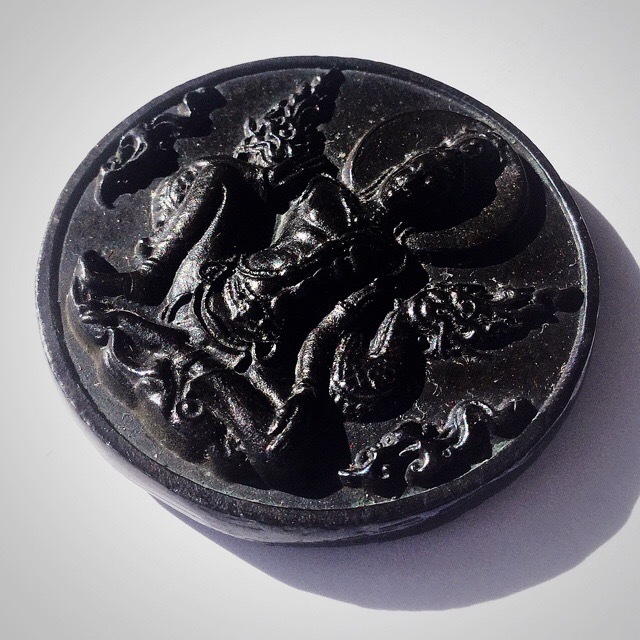 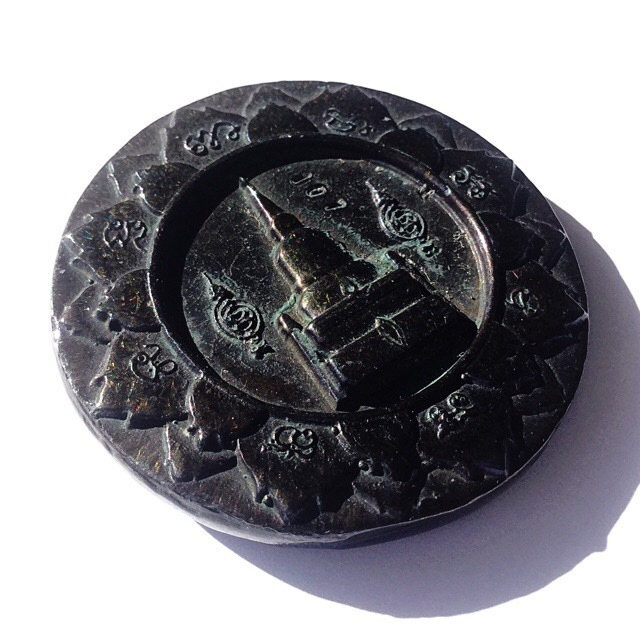 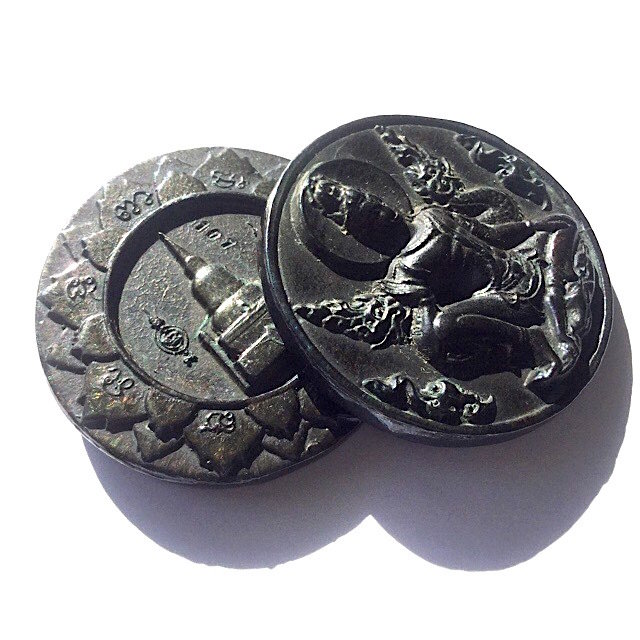