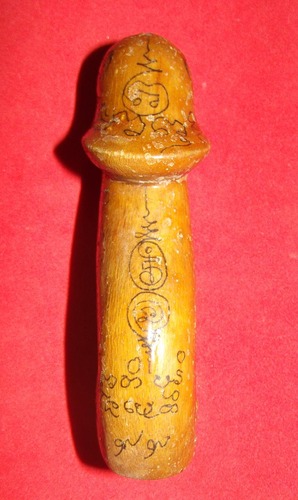 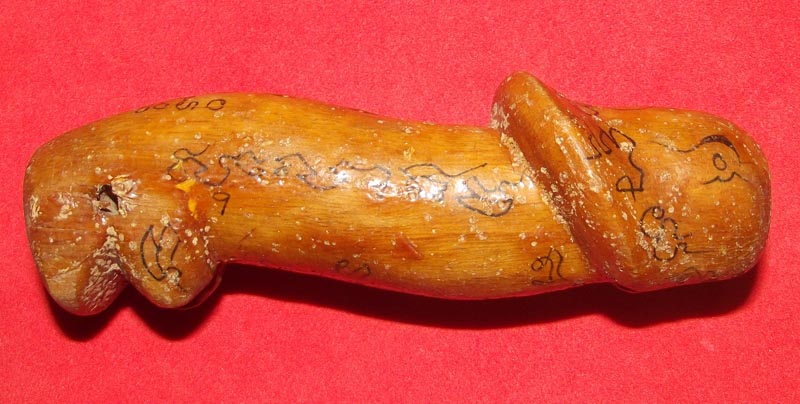 Made from Mai Ga Fak Rak (Crow brings Love tree), a very rare and Sacred tree with a Ruling Inhabitant Deva. This type of Deva lokes to make merit by renouncing its body (the wood from the tree) to become amulets to preserve Buddhism and lessen the sufferings of Humans. Mai Ga Fak Rak is one of the most powerful Maha Sanaeh woods for making Palad Khik (as well as using in other Sacred Formulas such as Metta Oils and sacred powders).

Kroo Ba Tamma Muni has given this Sacred Tree the proper Ceremony for Inviting the Deva to become Sacred Amulets, and then the preparation, empowerment and incantations according to the Ancient Formula of the Lanna Wicha Palad Khik. The Ruling Deva has been asked to inhabit and protect the amulet and its wearer by exuding a constant flow of Metta to form an aura of attraction and preferential feeling towards the wearer. 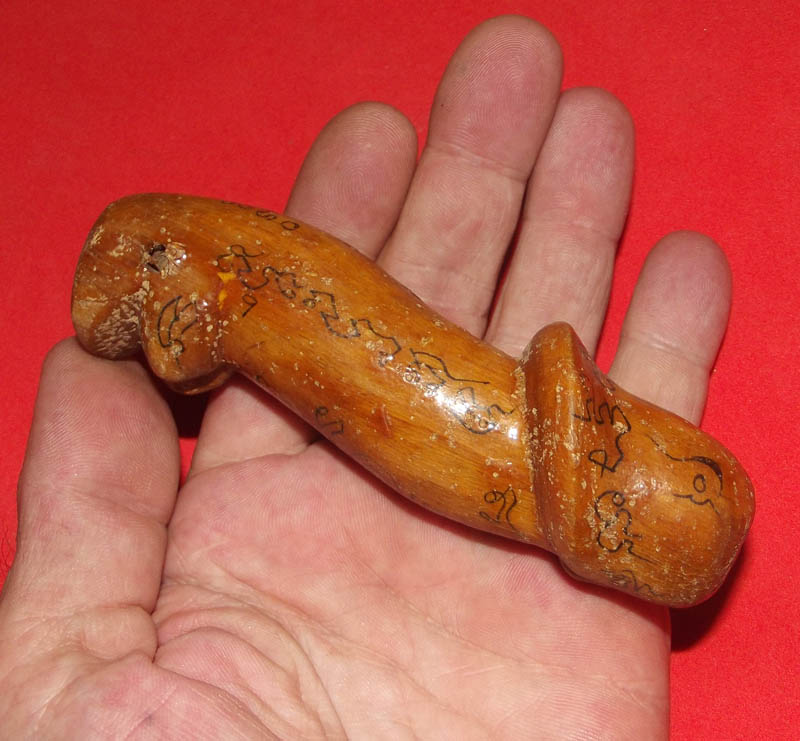 This kind of Maha Sanaeh Choke Lap amulet is an Ancient Wicha whose development can be traced right back to the Vedic Brahman Occult practices of Thousandsa of Years ago. The magic of the Palad Khik Mai Ga Fak Rak is double, in the sense that it has both magical and Buddhist empowerments and blessings within it, as well as the Muan Sarn (sacred wood and oils used to immerse the Palad whilst empowering), being of a Natural Maha Sanaeh property, which has a physical and scientific Aphrodisiac effect on the pheromones, and induces liking and good humor in the hearts of those who approach its range of influence. The power if this amulet is therefore both physical, and metaphysical.

The Palad Khik waqs made for the 'Rachasap Mai Ab Jon Sethee Roi Gote' edition (Kingly Treasures never Poor, 100 Ghotas of Riches). This edition of amulets was made to comemmorate the construction of the Pra Sakyamuni Sri Supradista Maetii (Asking for Rain posture Buddha - a famous scene/posture representing an episode of the Lord Buddhas life, which is also a teaching on a certain aspect of the Dhamma). The Buddha was constructed for the Worlds Buddhists to Bucha and Worship. Maha Sarakam is a Province that often suffers from Droughts, and so the Buddha calling the Rain is an Auspicious Reminder of the Buddha which will bring the blessing of more rain for the Province in Future harvests, which is extremely important in Thailand, which survives to 80% on its Farming Industry to fuel the country's economy. The Statue is 9 Meters High. It has been seen already that in Roi Et at Wat Burapapiram there is a Pra Khor Fon (Buddha Asking for Rain) 60 Meters high, which, since its Installation, has seen regular and plentiful rains every season in a normally drought ridden part of the Country.

This edition of amulets not only released Palad Khik, which were in fact very few in numbers, but also released an array of different amulet types;

To Bucha any amulets of this edition will bring protection from physical dangers, ghosts and black magioc, great maha sanaeh and metta mahaniyom for increasing wealth, and positive business, career improvement. Gamblers will increase their winninggs and lucky streaks.

Before chanting to the amulet, chant Maha Namasakara Mantra first (Namo tassa) 3 times, to the Buddha. Then think of Kroo Ba Tamma Muni, and Chant the Kata.

The part above in Italics is not in Pali, but in Thai. If You wish, you can use the prayer in your own language, for this part, which is a request for all the possible blessings available from this Amulet.

Bestow these powers upon the spells written upon this amulet ward off ghosts demons and monsters, keep  illnesses away, stop guns, knives, swords and other projectile weapons, keep away all physical and non physical dangers, let the spells contain Metta Mahaniyom and Maha Sanaeh attraction, and Kaa Khaay magic for good sales and prosperity, may both humans and animals feel Metta and Friendliness towards me when they see me, and may i succeed and win in all my Undertakings. So Be It!