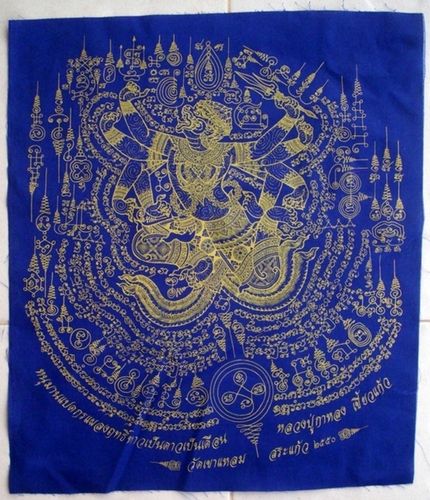 This Pha Yant of Hanuman transforming into superpowered form with eight arms, yawning at the moon, depicts the scene of Hanumans birth, where he rose up into the air and yawned the moon and stars. This sacred Pha Yant is from the 2550 Wai Kroo Ceremony of LP Ka Long at Wat Khao Laem. This example is in blue linen with gold inscription.

This edition is the year which brought so many stories of powerful amulets helping devotees, and that such beautiful Buddhist art was applied to the production of his amulets, Pha Yan and other magic charms, that the whole edition was snapped up by devotees and collectors in no time. The 2550 edition Pha yant have become an essential rarity for collectors and devotees of Luang Phu Ka Longs amulets.

Luang Phus powerful amulets have been the source of what has been perhaps one of Modern Amulet Historys most popular and widespread followings. Both the magical ability and purity of practice of LP Ka LOngs personal trajectory, and the praises and comments about his latent power which many great Masters have made about this inimitable and somehow despite his fame, elusive monk, are complimented with amazing and finely crafted Buddhist works of Art which have been made by LP Ka Longs most artistically educated followers for him to bless and empower with his amazing Wicha.