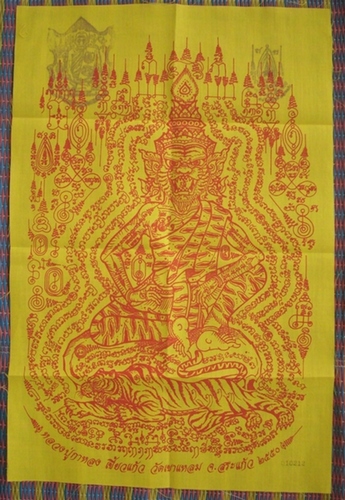 his edition is the year which brought so many stories of powerful amulets helping devotees, and that such beautiful Buddhist art was applied to the production of his amulets, Pha Yan and other magic charms, that the whole edition was snapped up by devotees and collectors in no time. The 2550 edition Pha yant have become an essential rarity for collectors and devotees of Luang Phu Ka Longs amulets.

Luang Phu met this Deity in his Kuti a he meditated and this began a relationship between Luang Phu Ka Long and Por Phu Ruesi Jao Saming Pra that forged the tragectory of what is one of todays most popular Wicha holders and famous Guru Monks, whose amulets are made with both ancient Wicha as well as finely crafted artistic interpretation. Namlely, Luang Phu Ka Long, Khiaw Gaew.

The Ruesi Por Phu Jao Saming Prai is seated on a rock with a leaping tiger below him. This Yant has the qualities of Serm Duang, Kong Grapan, Choke Lap, Klaew Klaad and Metta Mahaniyom. The Baramee of the Ruesi Devas who practiced austerities to attain their great merits will have an improving effect on everything from business to household and family affairs.

Luang Phus powerful amulets have been the source of what has been perhaps one of Modern Amulet Historys most popular and widespread followings. Both the magical ability and purity of practice of LP Ka Longs personal trajectory, and the praises and comments about his latent power which many great Masters have made about this inimitable and somehow despite his fame, elusive monk, are complimented with amazing and finely crafted Buddhist works of Art which have been made by LP Ka Longs most artistically educated followers for him to bless and empower with his amazing Wicha.