999 of these magical sceptre knives were made, which triple up as an amulet, bucha object on the altar, or magical ritual weapon for performing various magical rites and even blessings, making prayer water, and related tasks. Useful for warding off danger and black magic, and as a protection for those practicing meditation, or who pray to the Ruesi Deities. 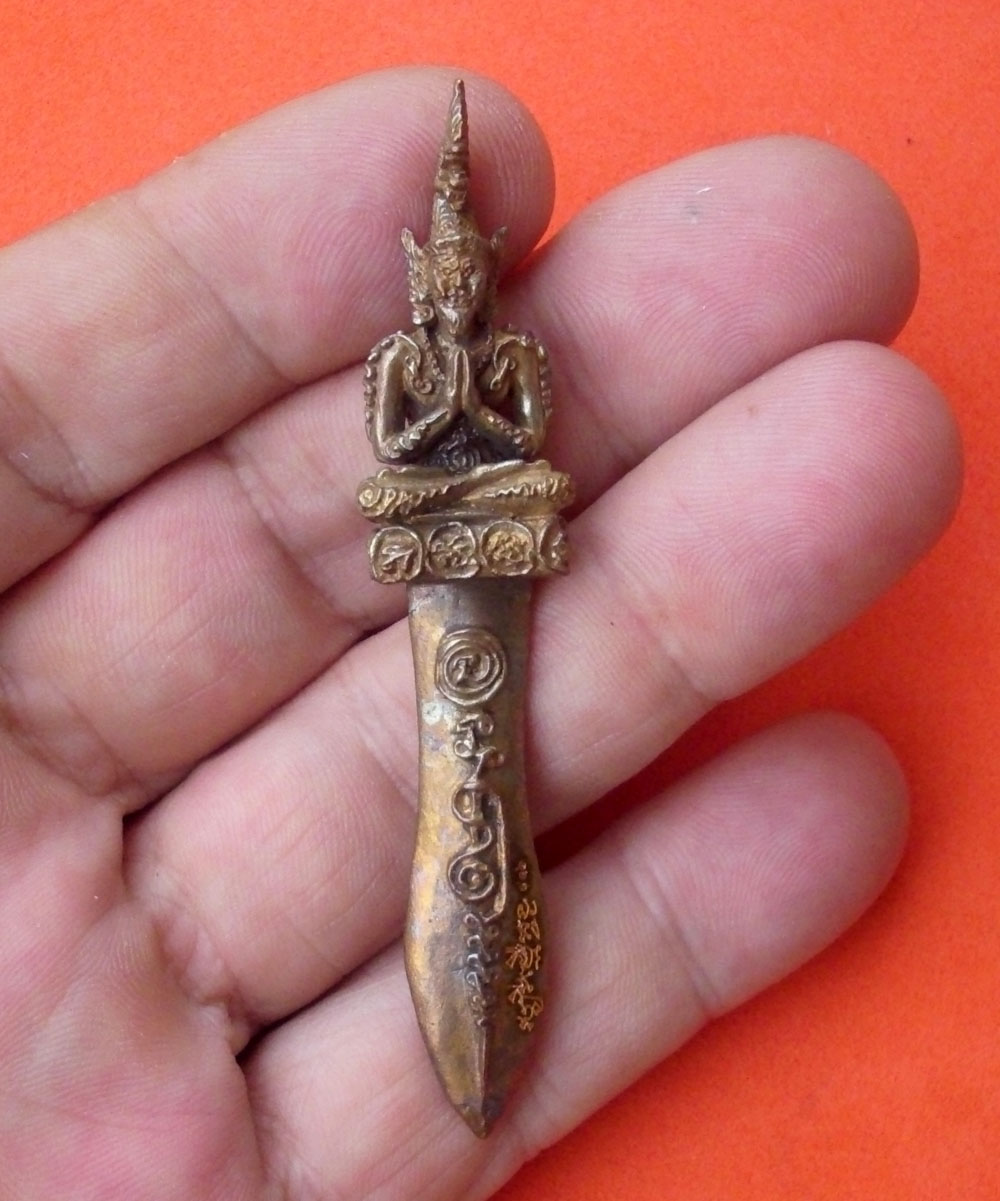 The Boroma Kroo Ruesi is powerful in increasing the Baramee (merits and good Karma) of the Devotee, and improving thus your Horoscope sign to be more auspicious. metta Mahaniyom and Maha Sanaeh charm gives increasingly positive results with the power of charm and attraction.

The Ruesi is endowed with the power to remove black magic and to ward of evil, preventing accidents and increasing your resistance against harm. Even the Devas and the asura Monsters,ghosts and Demons fear the power of the Ruesi, one of whom in fact was responsible for the God Ganesh losing one of his tusks in a dispute. If a Ruesi can smite one of the tusks of Ganesha, and still live to tell the tale, then this tells much of the immense power which the Ruesi Command in the heavens. This Ruesi withNaga King crown is the Kroo of the Nakaracha Yantra (Yant Paya Nakarach), and the Yant Nak Giaw. This particular Yant, despite being pure power due to the Naga King, is in fact directed at Metta Mahaniyom, to increase your friends and reduce enemies, and attract money and admirers. 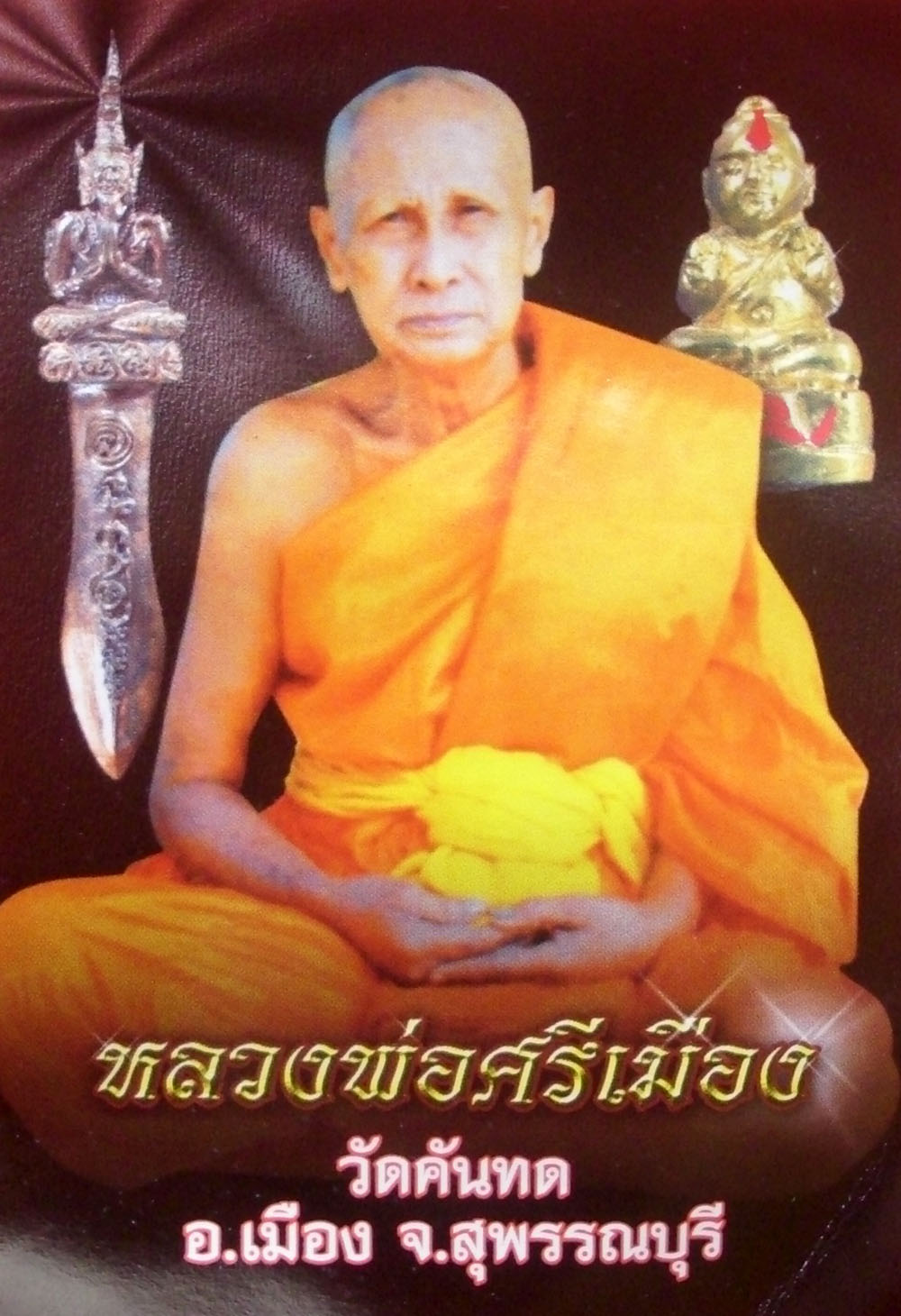 For the creation of this Pra Kan ritual sceptre knife, Luang Por Sri Mueang needed a double empowerment on two different occasions in order to fulfill the necessities of true empowerment; Empowerment according to the Dtamra Ruesi (the traditional ritual and ceremonial methods of Ruesi-Ism), inviting the 108 Ruesi to attend, and then empower in their presence in solitary meditation. Luang Por performed this empowerment repeatedly night after night choosing the right times and dates for powerful incantations. Immersion Empowerment; What is important, is that he correctly placed the sceptre immersed in water, which is an essential aspect of empowerment for the Naga head Ruesi deity to function properly. Five major empowerments in Jhanic meditation were made in this manner by Luang Por Sri Mueang.

This has charged the Pra Kan sceptre with the presence of the Deity mind, which has been invoked and awoken, and the Nakarach Ruesi magic is flowing freely through the sceptre. The sceptre can fulfill your requests and wishes by praying to it, or by praying, chanting and making invocations to endow others with these blessings, inscribing yantra and incantations on their foreheads, or crowns. Can be used to make holy water, and many other spells. The sceptre was made from metals of an ancient magic sword which Luang Por had kept from the times of his great grandfather, mixed with an ancient occult khan long hin(a metal receptacle). Thjese two sacred metals endow the power of active and passive magic, can be used as a weapon or instrument to point at or affect other objects or beings, as well as able to interact with a prayer water bowl for example, and induce magical properties to the water in the bowl. The blessings recieved from this instrument are threefold; Increase Popularity, Charm and business sales Increase Luck and Karma Protect against danger and black magic

Luang Por created the Ruesi image with other sacred metals too in the smelting, on metal Yant fouls he made Khom Agkhara sacred lettering, empowered with various spells; Na Dtri Naedtr, Na Kong Ton, and Na Maha Amnaj, and made a Yantra spell which was inserted into the ruesi statue. Then all of this was taken and forged into these sceptres of seven sacred metals - importantly the seventh of which being metal from Almsbowl lids, which he inscribed Sacred yantra on (Yant Gampaeng Jakrawal, Na Gan Play, Na Yant Trinisinghae, and many more to make 99 Yantra on 99 almsbowl lids. These were then smelted into the metals for the forging of the scepters.

You can Increase your Merits and improve the effectivity of this magical item by incorporating Katas for the Naga deities as well as Ruesi Deities, for this is in fact both a Ruesi and a Naga within one being.