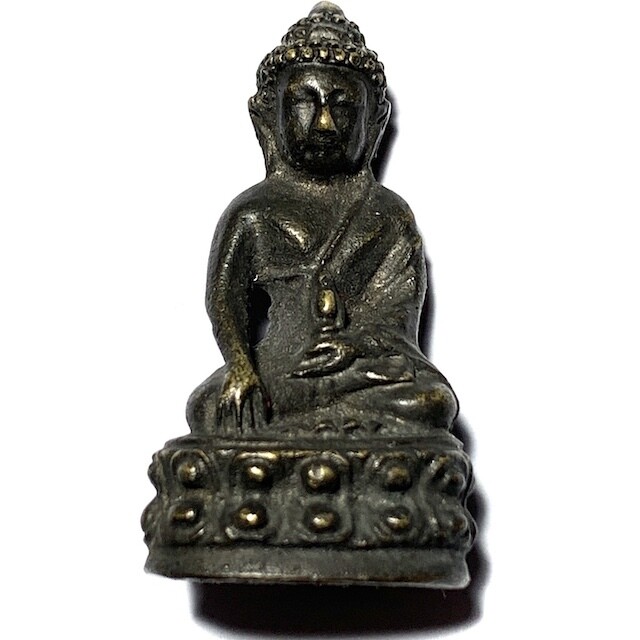 The Pra Kring Gon Singh first edition amulet was released in the year 2539 BE, and was forged from smelting ancient artifacts, various metallic amulets of earlier editions of LP Yaem, and Yantra foils in brass, bronze, gold, silver, lead and copper with Sacred Inscriptions fromLuang Por Yaem. Because of the many kinds of different metallic artifacts, amulets, Yantra foils, and other Chanuan Muan Sarn used, it is ubiquitous to find that each individual Pra Kring has a slightly different tone, from the texture or color, making the appearance of each Pra Kring inimitable from any other. 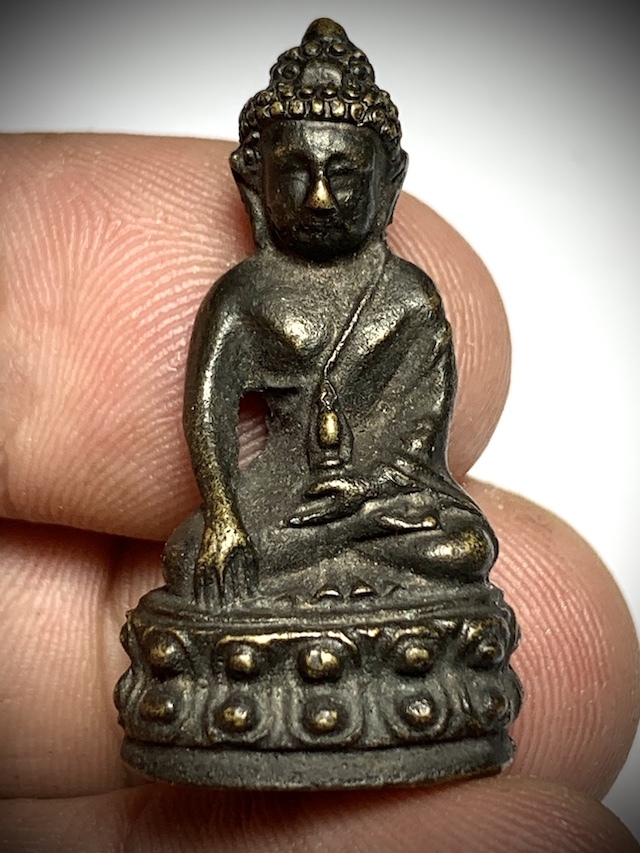 Free Registered Air Parcel Shipping Worldwide is included with this amulet. The Pra Kring is one of the least often made, popular, and most widely collected amulets with Thai and Thai-Chinese Buddhists, and is known with Buddhist Devotees as an auspicious Blessing of the Purity of the Buddhas, as well as a Union of Sacred Art between the Theravada and Mahayana Sects. The Imagery of the Pra Kring Buddha is Essentially Mahayana style and very beloved by Thai Chinese and Chinese Buddhists. It is considered a family heirloom that is passed down to one’s Children, and is an Auspicious Blessing, Protector and Luck Bringer with no Black Magic or Karmic side effects, only Meritorious Buddha Blessings. 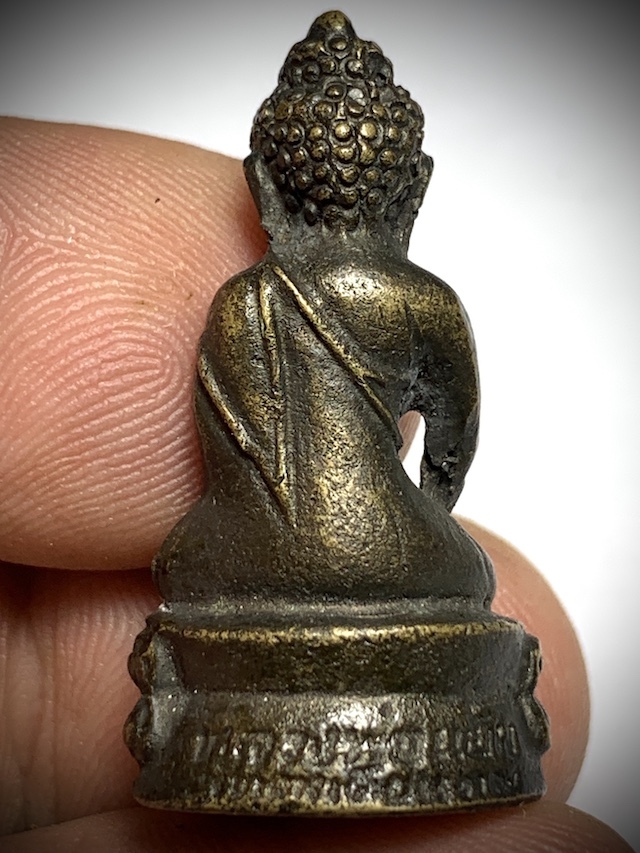 Apart from the Spiritual Value of the Pra Kring, the Kring is a Classic Collectors Favorite, as well as a Family Heirloom Amulet that is passed on throughout Generations. Many Modern Age Sorcery Amulets serve very well to gain fast short term effects, but are often changed for new ones as their powers wear out. But Buddha Images and especially the Pra Kring and some other amulets (i.e. Pra Somdej) do not devour Karma or Power up, rather, base their Miracle Force in the Faith, Merits, and Good Behavior of the Wearer, and never wear out, rather, become more Sacred as it ages. This is the reasons such an amulet is the perfect heirloom, for its tendency to become ever more Sacred and Powerful as Time passes.

Luang Por Yaem was the abbot of Wat Takian in Nontaburi for over 50 years, until his passing away on 4th of May 2557 BE, at age 98. His passing closed the 'Dtamnan' (legend) of his famous Wicha Takrut Kor Hmaa 'dogs neck' Kong Grapan protection spell, and the Wicha Suea Pern Dtaek Gunstopper Tiger Wicha, of this Great Master, whose ability with these Wicha was legendary.

Below; The Insertion of the Paya Rachasri Singha Lion in the Base lends Maha Amnaj Commanding Power to the qualities of the amulet 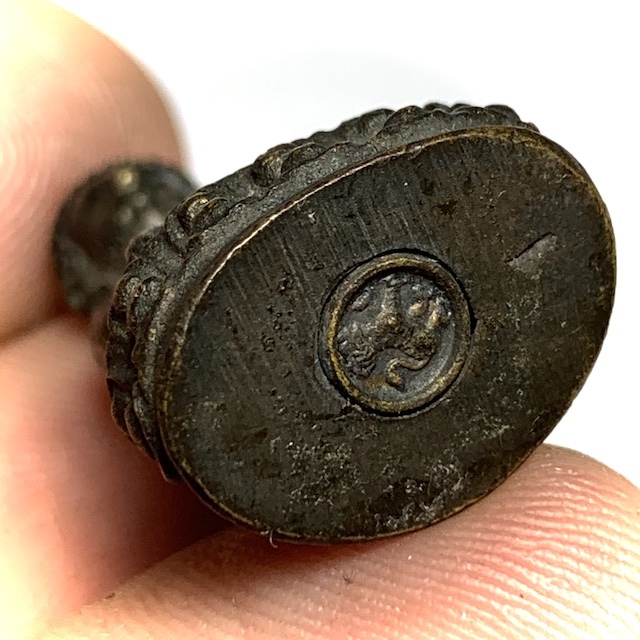 Luang Phu Yaem was extremely famous for his Suea Phern Dtaek tiger amulets, and akrut Kor Hmaa Dogs Neck Takrut, and Talismanic Charms, but also made purely Buddhist Amulets of immense esteem such as Rian Kanajarn monk coins, and Pra Kring, Pra Chayawat and Roop Lor metallic amulet. In early days, Luang Por Yaem would make tiger skin Takrut, cutting each piece of hide one by one, in different sizes, and only make small numbers. But as he became old, Luang Por developed a kind of tuberculosis of the lungs, and became concerned that the fur from cutting small pieces one by one, would be breathed in and damage his lungs, so he changed method for later era editions, to that of inscribing square channels on the whole hide, and then cutting them up in one batch. he would then inscribe them as usual, in black, red or blue permanent ink. 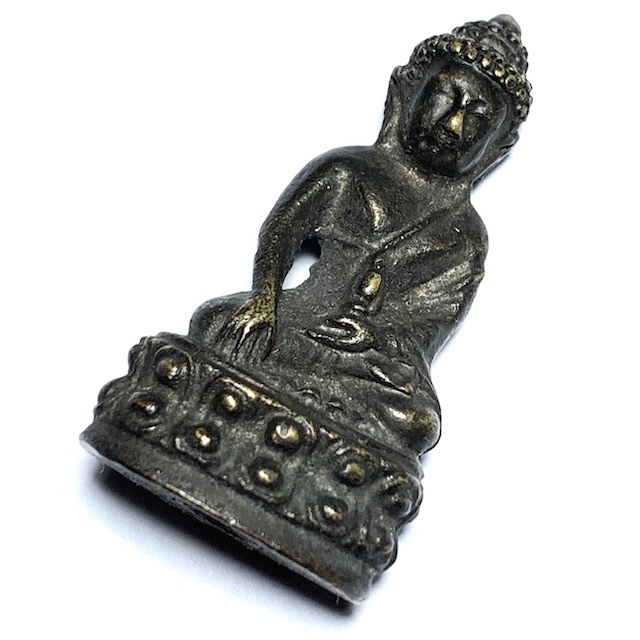 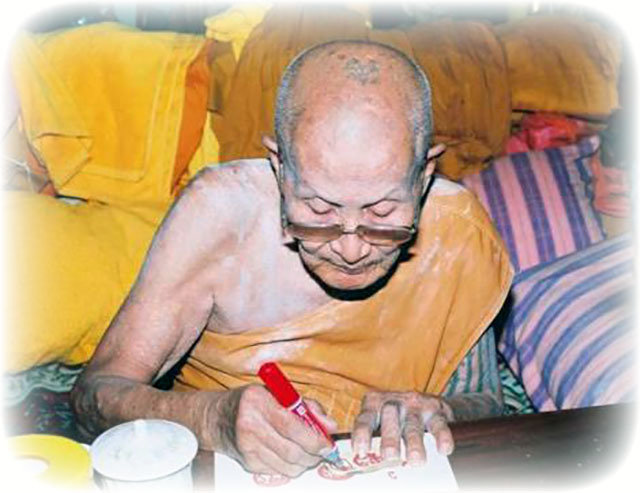 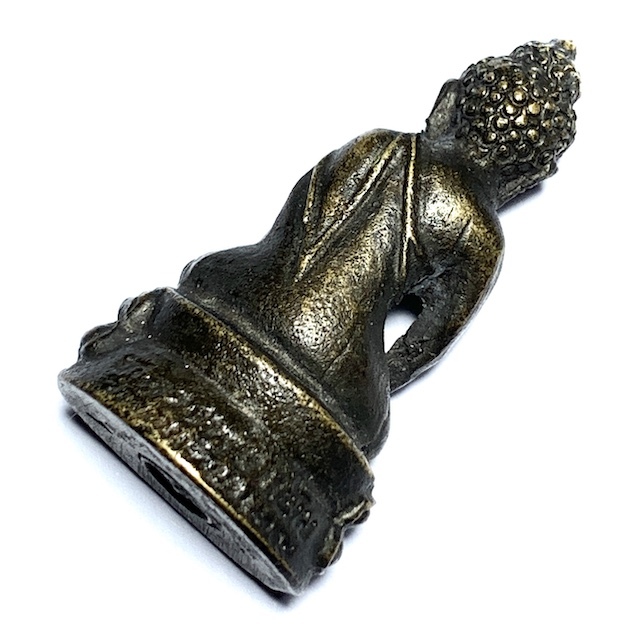 Below; Dragon and Tiger's Mouth entrance to a twin shrine either side of the Uposadha Shrineroom wirhin the temple of Luang Por Yaem (Wat Takian) 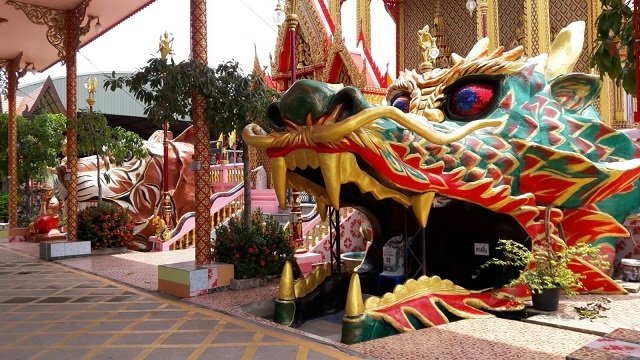 Despite the fact of his passing being seemingly recent, his amulets have disappeared from the scene extremely rapidly since the Master has left us, and were also fast to deplete with each edition during Luang Por Yaem's Lifetime. The popularity of his amulets with his Devotees, for the power of Maha Ud, Klaew Klaad and Metta was, and remains to this day, immense. 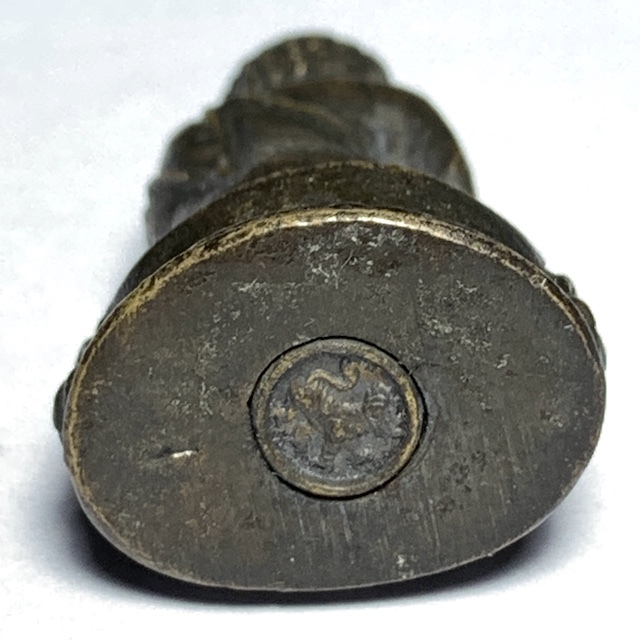 Luang Por Yaem was a Looksit (apprentice) to the lineage magic of the 'Lum Mae Nam Ta Jeen' group of sorcery Masters, who were a group of High Adepts who had gathered their forces to form an alliance and share their Wicha to form a Dtamra. 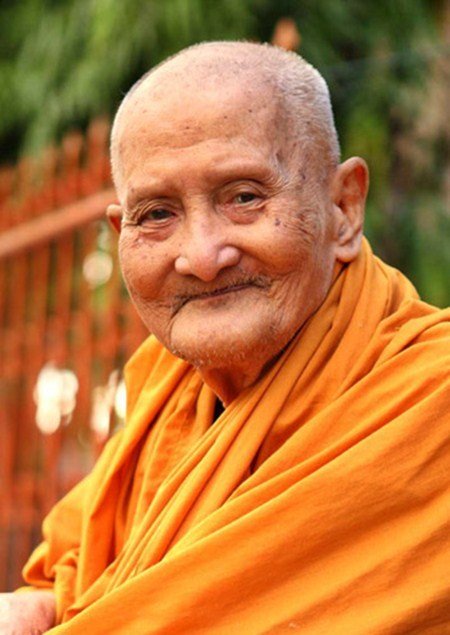 Because of this, Luang Por Yaem received access to a full Dtamra of Grimoires of the Masters of this Lineage, and became Adept at a vast number of different kinds of spells, amulet making methods, and empowerment secrets. To name just some of the many rare and ancient powerful Wicha he possessed, were the Yant Maha Bao, Wicha Maha Ud Pern Dtaek Gunbreaker spell, the Wicha Takrut Kor Hmaa dog neck spell for Kong Grapan Chadtri, Tiger Amulets, such as the world famous Suea Phaen Pern Dtaek leaping tiger brazen metal 'Loi Ongk' statuette, and Takrut Hnang Suea, and his 'Rian Run Raek' first edition Monk Coin of 2513 BE. 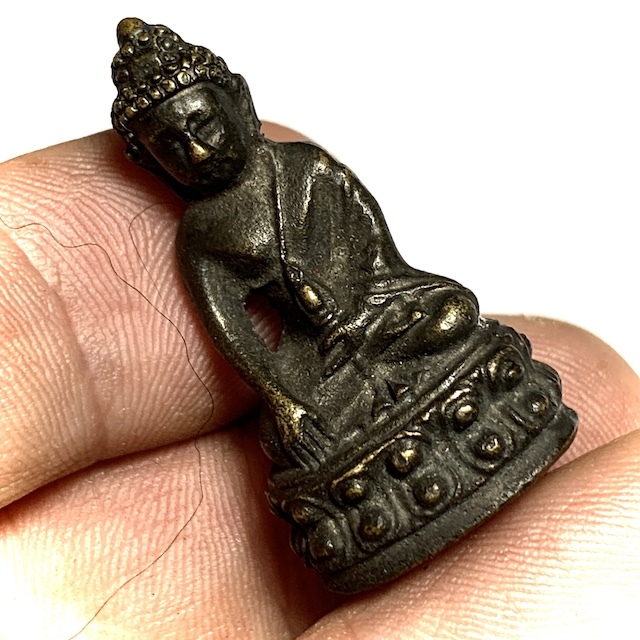 One of the inimitable aspects of the amulets of Luang Por Yaem, is that he would always include the empowerment of the Wicha Yant Maha Bao Maha Ud in all of his amulets, be they Takrut Tone, Takrut Tong Daeng, Ngern, Takua, or other inscribed amulets such as Tiger Skin and carved effigies, and some of his Monk Coins, famed for Metta Klaew Klaad and Maha Ud.

The Yant Maha Bao Maha Ud is seen on the Rian Run Raek 1st edition monk coin Luang Por Yaem's first edition Monk Coin was made in Albaca in the year 2513 BE, with 3000 coins made. The coin is hence extremely rare and highly valued. The world famous Suea Pern Dtaek leaping tiger Loi Ongk Statuette amulets were made for the first edition in the year 2540 BE, to raise funds to continue the building of the temple. 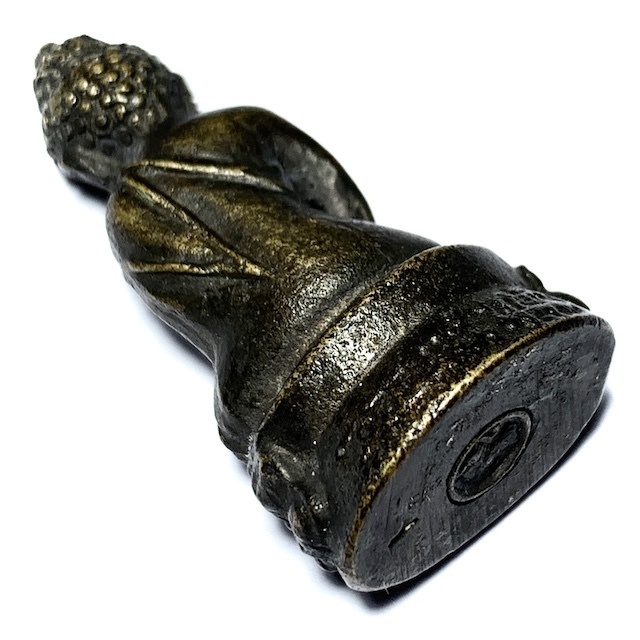 Because of the rumors of Luang Por's Kong Grapan Klaew Klaad and Maha Ud Pern Dtaek Gunstopper/Gun Breaker powers, some devotees took one of the amulets and tested a gun out on it by shooting at it. The first shot did not fire, so they tried a second shot. The second shot also did not fire, and so they tried once more. The third time, the gun broke apart, wounding the hand of the person firing it (as if to punish him for insolence). The person was scarred for life. 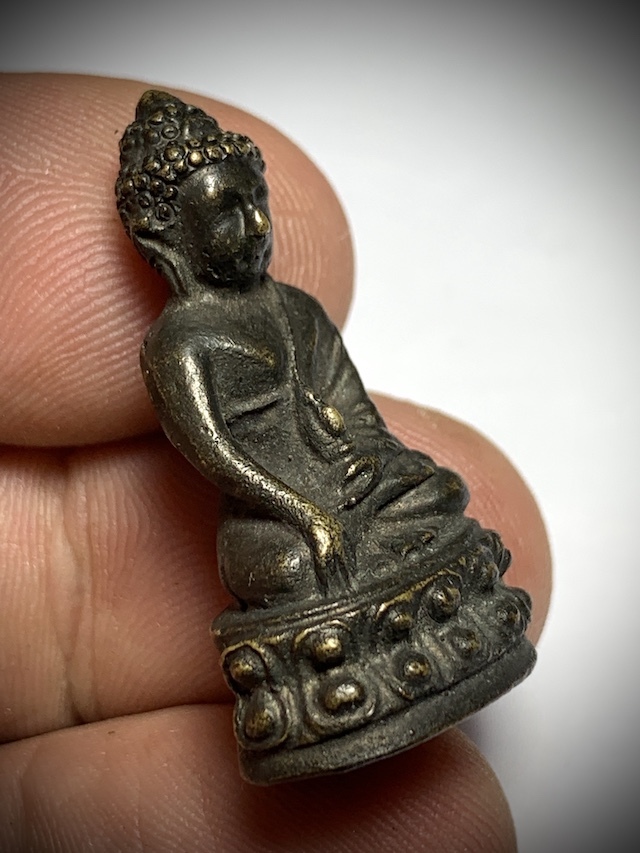 Luang Por released various editions of leaping tigers, between 2540 and 2556 BE, all of which are very difficult to encounter. Another reason for the popularity of Luang Por Yaem's Suea Pern Dtaek amulets, is the Buddha Abhiseka empowerment and blessing ceremonies always were attended by many great Master Monks. 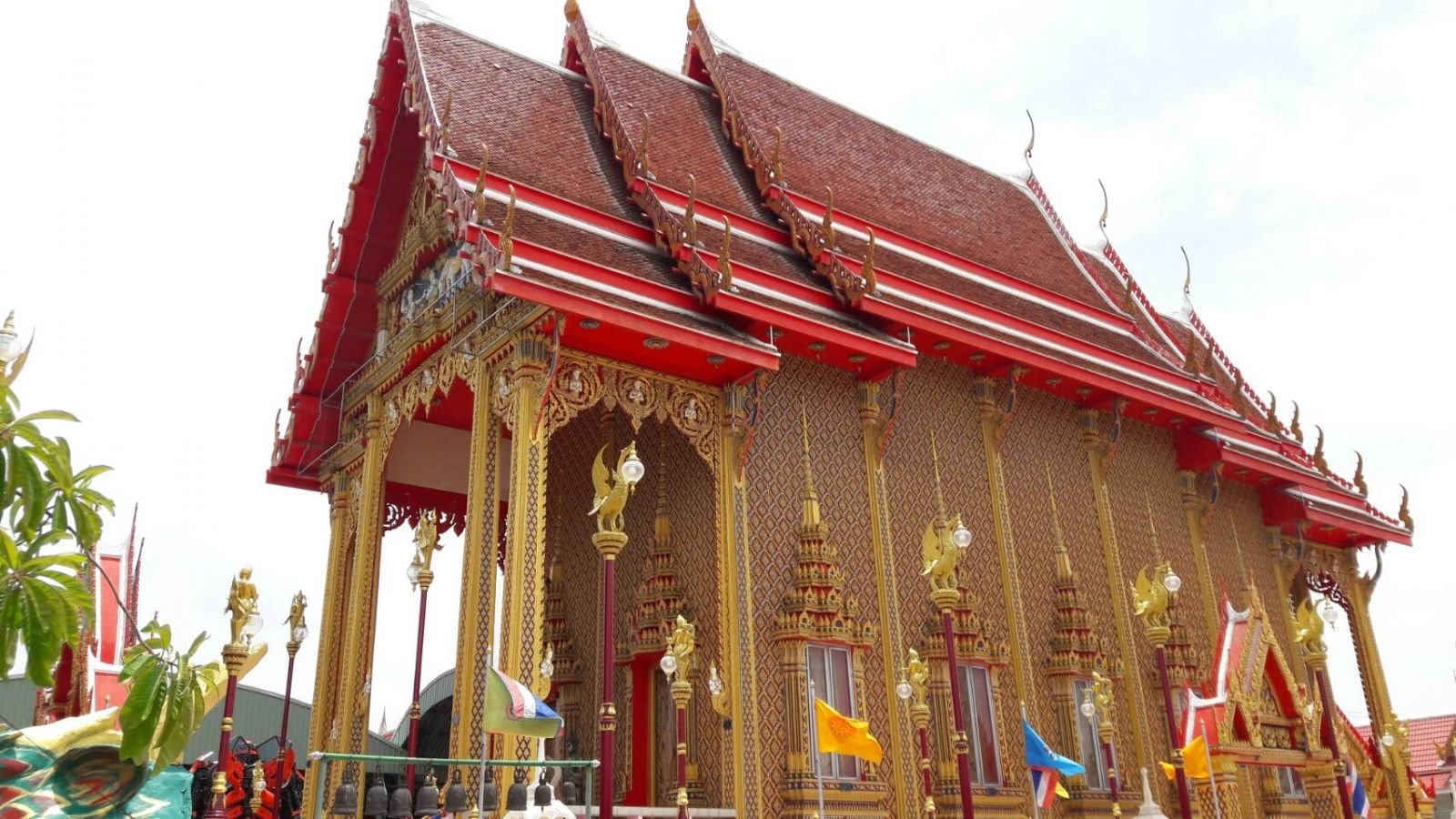 The amulets themself were organised comissioned and designed for Luang Por Yaem through the efforts of Luang Pi Sang-Op (all editions), which is a Meritorious Effort that requires recognition, as a devoted assistant and apprentice to Luang Por Yaem. 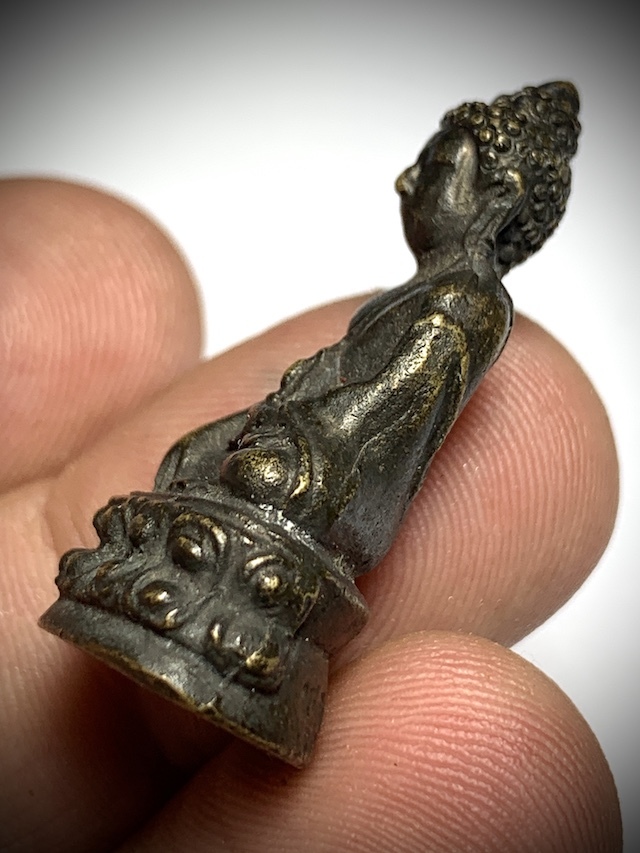 The Suea Phaen Pern Dtaek leaping tiger and other tiger amulets of Luang Phu Yaem are highly sought after amulets, which are extremely difficult to encounter, especially his hand made individual custom amulets and talismans such as the Takrut Kor Hmaa and Tiger Fur Takrut, and of course, rarest of all, his first edition Albaca coin.

Below; First Edition 2513 BE Coin of Luang Por Yaem 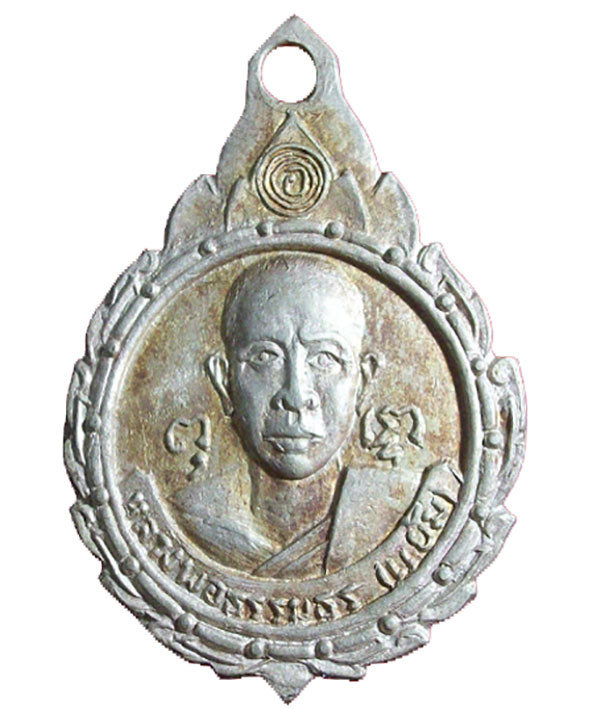 The Legend of the Takrut Kor Hmaa

Luang Por Yaem's Takrut Kor Hmaa became very famous due to a very unusual story, which also reveals the great compassion of Luang Por Yaem, towards all living sentient beings; Luang Por Yaem used to keep many dogs at the temple, and feed them, some of which were a bit aggressive (protective of the temple and of Luang Por), and would receive blows from stone throwing and even be attacked with blades and shot at with guns by some of the local villagers who did not like dogs, and many dogs would often have large wounds, and suffer. 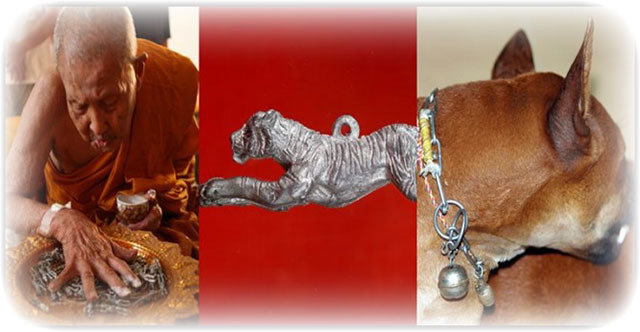 So Luang Por Yaem made a special Takrut using the Wicha Yant Maha Bao Maha Ud, and hung them around the necks of the dogs, to protect them. One day, a villager decided to shoot one of the temple dogs, but when he shot the gun, it exploded in his hand. Upon seeing the dog unharmed and noticing the Takrut around the dog's neck, the villagers who witnessed the event became excited, and the rumor spread. 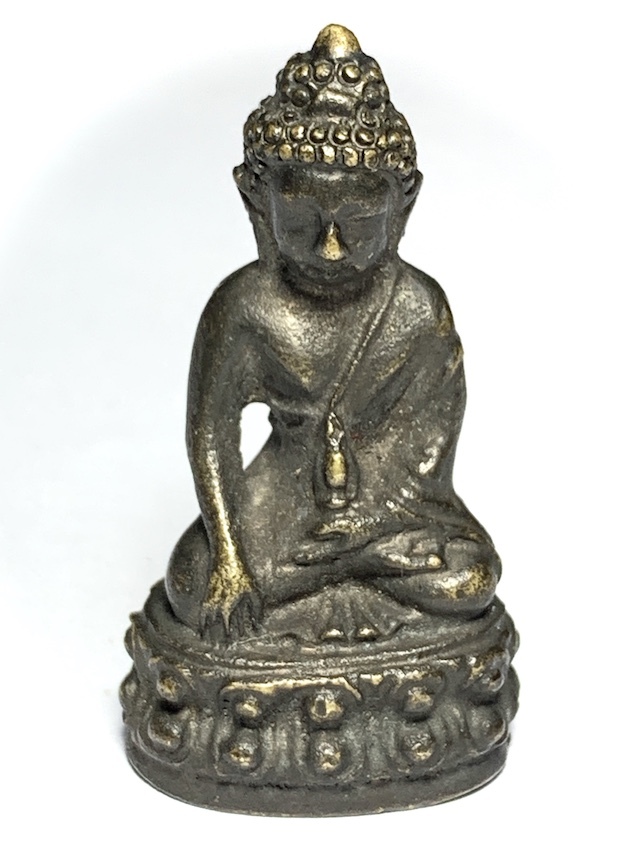 Many villagers (those with less honesty and good heartedness), actually coaxed the dogs to approach using food and removed (stole) the Takrut for their own use. Others with more precepts of goodness went to the temple to beseech Luang Por Yaem for a Takrut. Luang Por Yaem saw the needs of the people, and began to make Takrut Yant Maha Bao Maha Ud in two versions, one for dogs, and one with a different formula for humans.

However, after the legendary power of the Takrut becoming even more nationally famous after devotees had many miraculous life saving events occur, with many cases of guns not firing, or exploding, the Takrut Kor Hmaa became the target of forgers, who made a very exact looking copy of the Takrut. This was found out as a devotee took a Takrut to the temple for Luang Por to re-bless, and Luang Por Yaem held it, and said immediately 'this is not my Takrut, it has no power'. 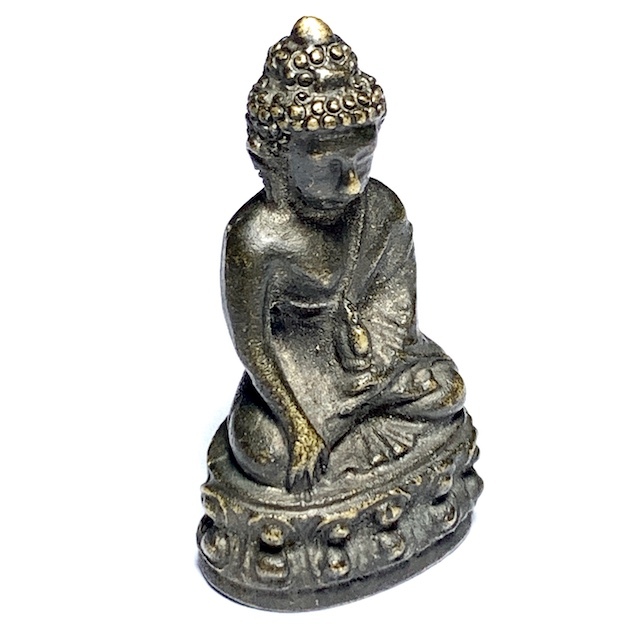 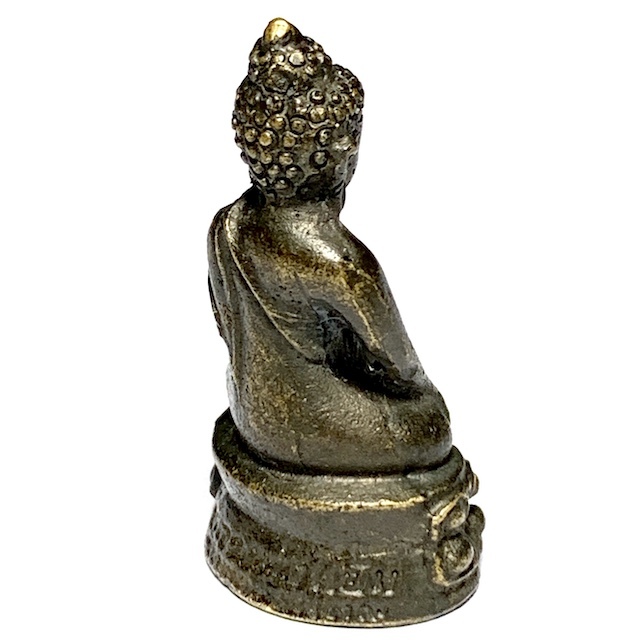 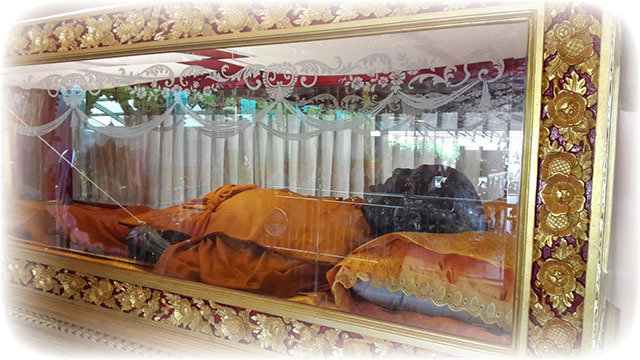 Luang Por Yaem Passed away in 2557 BE, and his relics (mortal remains) are kept in a glass coffin in his mausoleum at Wat Takian, where devotees go to pray to him daily, and wonder at the fact that his body does not decay as do normal corpses, which is considered a sign of miraculous achievements in a monk. His works throughout his life developed the temple of Wat Takian from a small temple into the world famous and highly visited temple it is today. 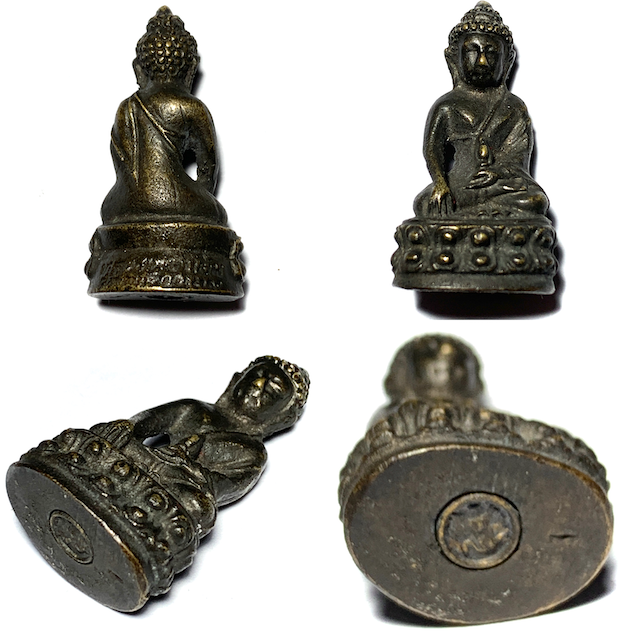