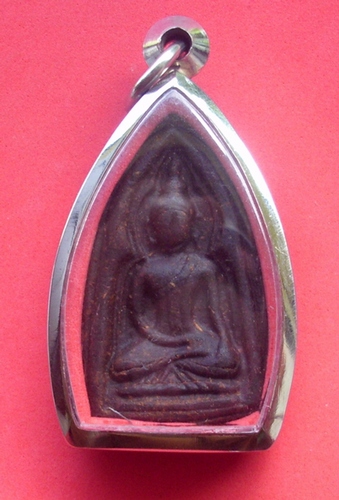 Pra  Pong Pim Nang Paya - made with Ya Wasana Jinda Manee, most sacred and attractive of substances, endowing the wearer with immense charm and convincing power over others. Made and empowered by Luang Phu Juea Biyawano, of Wat Klang Bang Kaew (Nakorn Pathom).Medium small in size, it is suitable for Ladies Children or Men to wear. A favorite amulet for Ladies, and one of the Benjapakee Top Five classic Pim of Thai amulets.

Issued in 2551 BE, the amulet is an incredibly beautiful piece of Thai Buddhist Art with the extended slender features of the Buddha (for this amulet is indeed an image of Lord Buddha, and not of Pra Khun Phaen at all. This is often the case with many amulets named after Khun Phaen. In fact, the original Ban Grang Khun Phaen amulets were also not a representation of Khun Phaen, rather was an image of Pra Putta Chinarat Buddha in Pitsanuloke, but due to the strong charm, metta and lucky powers of the amulet, it was named 'Pra Khun Phaen' for the fact it made people have many lovers, succeed in business, and also win in competition or war.

This amulet is made using the very powerful and rare substance 'Ya Wasana Jinda Manee' in the formula of the magical Wichas of Luang Phu Bun. Luang Phu Juea is one of Thailands leading amulet makers, known for effectiveness, his amulets have become a safe bet for the people of Nakorn Pathom province, with most people experiencing some form of improvement or success after obtaining one of Luang Phu Juea's amulets for Bucha. This example has a steel back face on the case, which is made from stainless steel. The encasement as seen in the picture, is included in the price.

The below picture is of another amulet which has transparent back face - it is for examination purposes only so you can see the design and surface texture of the amulet. This example however is in truth only visible on the front face, with closed steel rear face.

The rear face has the Kata 'Pa Ka Waa' (the Buddha) for Metta and Protection on it, as well as some faintly visible hand inscriptions from Luang Phu Juea himself. Numbered code stamp is on the bottom.

Wat Klang Bang Gaew has a long History and Heritage of great amulet makers, and is its own particular lineage of Magical method. Wat Klang Bang Gaew is one of three Nationally famous and important temples for sacred amulets that are all found in the Nakorn Pathom Area. Nakorn Pathom is the home of a large number of top temples whose amulets have gained immense importance on both a National and International scale. Luang Phu Jueas Bia Gae amulets are especially sought after, and are believed to be amongst the very few still remaining authentic Wicha for Bia Gae (meaning they really work).

Luang Phu Jeua was the last Monk of a Lineage of three Great Masters in the same temple. The first of these was of course, Luang Phu Bun Khantachote, the second being Luang Por Perm Bunyawasano. After the passing of the second Great master, Luang Por Perm, people thought that perhaps this was the end of the Lineage, but this is not the case, for the third Great master appeared, with the name 'Luang Phu Juea Bpiyasilo', the first apprentice of Luang Por Perm and the inheritor of the Wicha of Luang Phu Bun, through direct transmission from LP Perm himself.

Since his passing away aged 84, on 29th December 2009, his amulets have become ever rarer and in demand from the masses of Looksit who follow this Master, in the Lineage of LP Bun and LP Perm.  His most sought after magical items are the Bia Gae, and amulets made from his Ya Wasana Jinda Manee, which he inherited from Luang Phu Bun through LP Perms teaching.