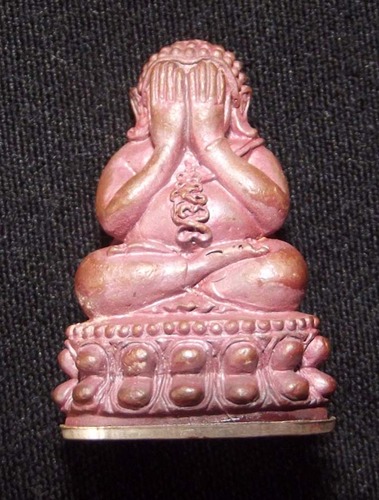 Luang Phu Kambu has released a special edition of Classic Pra Pid Ta amulets in various Sacred and Precious Metals. The Pid Ta have a Kring Bead inserted inside them (Sacred Rattle), and are thus not only Pid Ta, but also 'Pra Kring' amulets. The base of the Amulet is covered with a solid silver covering, with Yantra. This example is made from 'Nuea Rae Lek Nam Pi Phiw Fai Pasom sangkawanorn'. 'Lek Nam Pi' is a Lek Lai Family Elemental Metal and a Kaya Siddhi Adamantine Substance, used for the smelting of Sacred Magical Instruments and Amulets. The Lek Nam Pi has been smelted alchemically with Incantations and mixed withancient Nails made from Sangkawanorn, a very ancient alloy considered extremely Sacred and Sorcerous. 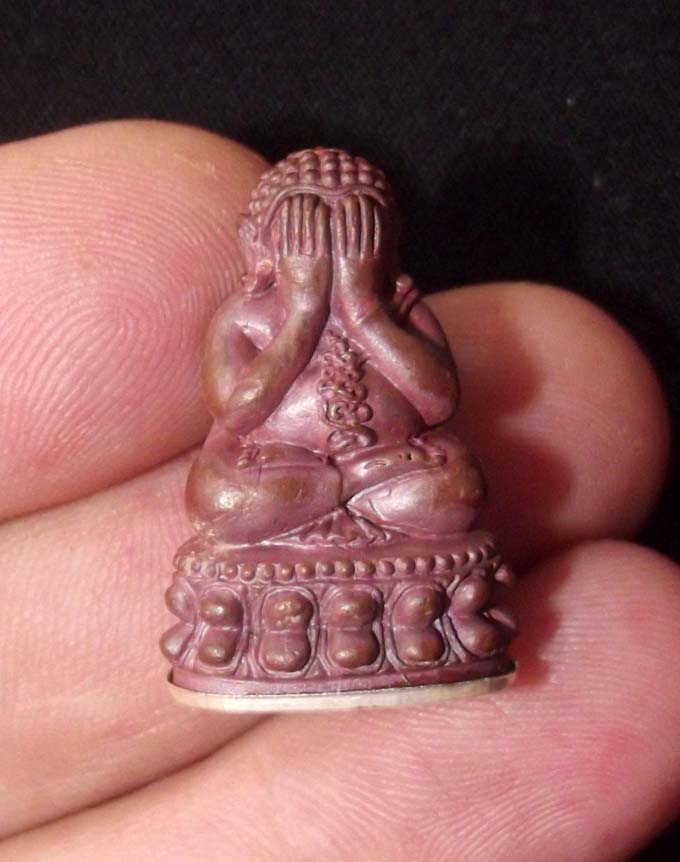 Sangkawanorn Nails are an Ancient form of Sorcery that is used whenever Guru Masters wish to make ritual instruments or Magical Weapons, they prefer to use Sangkawanorn Nails, for their power to ward off Black Magic and Dark Energies. In Ayuttaya Era, they had no  nuts and bolts or screws for building with, and these lead based nails were used in Olden Times to restore and repair Temples, Shrinerooms and Monuments. The old Nails from Ancient Temples are thus gahered and used for the purpose of making Magical Amulets and Ceremonial Instruments such as the Meed Mor Spirit Knife.

These Powerful Alchemical Metals were then smelted with a number of Ancient Artifacts, Yantra Foils and Famous Amulets, to produce the Final Sacred Metal we can admire in this Exquisite and Magically Charged Pra Pid Ta Amulet. 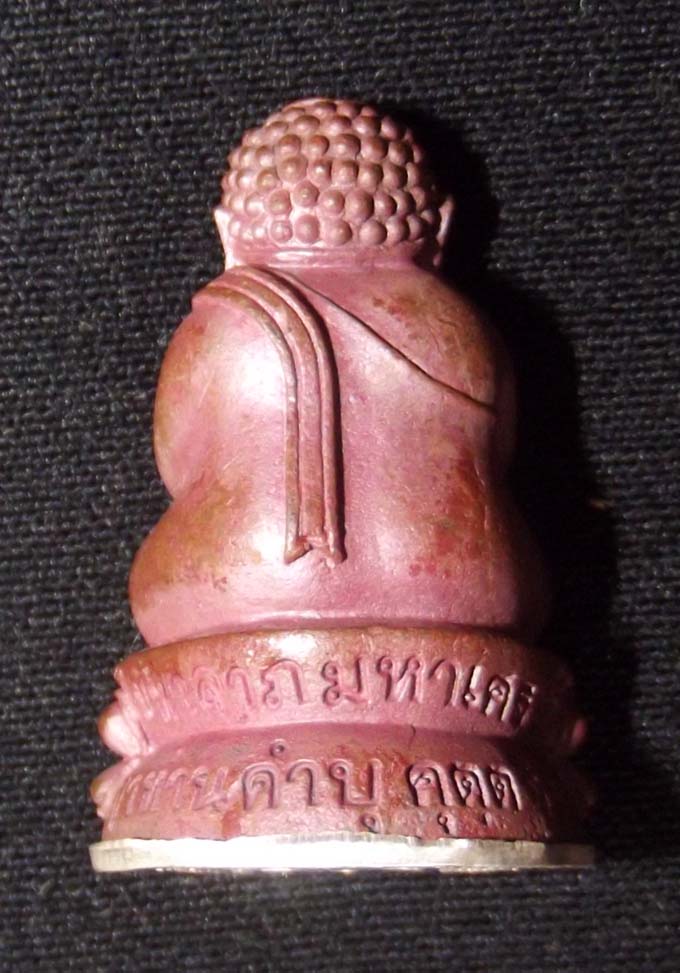 Blessed on the 7th March 2555 BE, in Putta Pisek Ceremony at Wat Gut Chompoo. The amulets were made in various other Sacred Metals too;

Gammagarn set with solid gold base - 80 sets made with the following Metals; Nuea Maekapat, 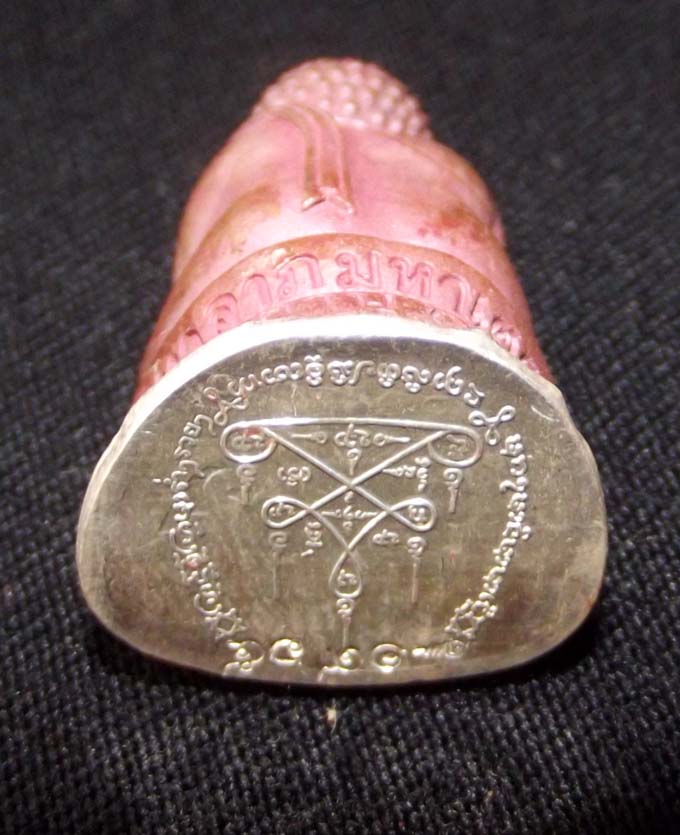 Each amulet has some hair of Luang Phu Kambu, Puttakun Powder, and ancient 'Mai Sim' wood inside the statue. The base is sealed with a solid silver plate with Sacred Yantra inscription, and limited edition code number embossed. 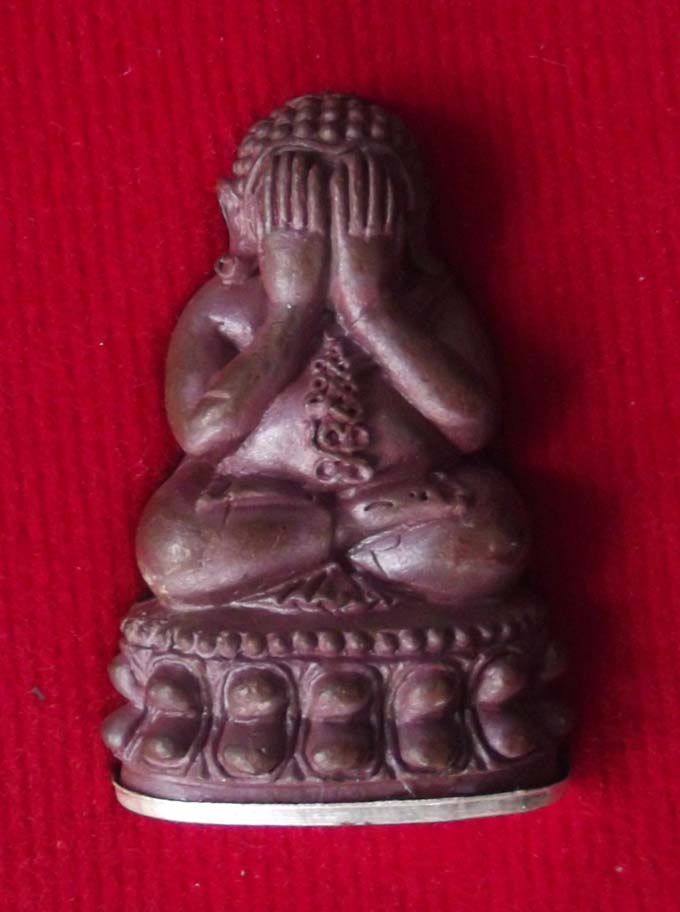 All amulets of the series have a solid silver base, except for the Gammagarn set which has solid gold base covering. Comes with original temple box. Can be encased if desired. 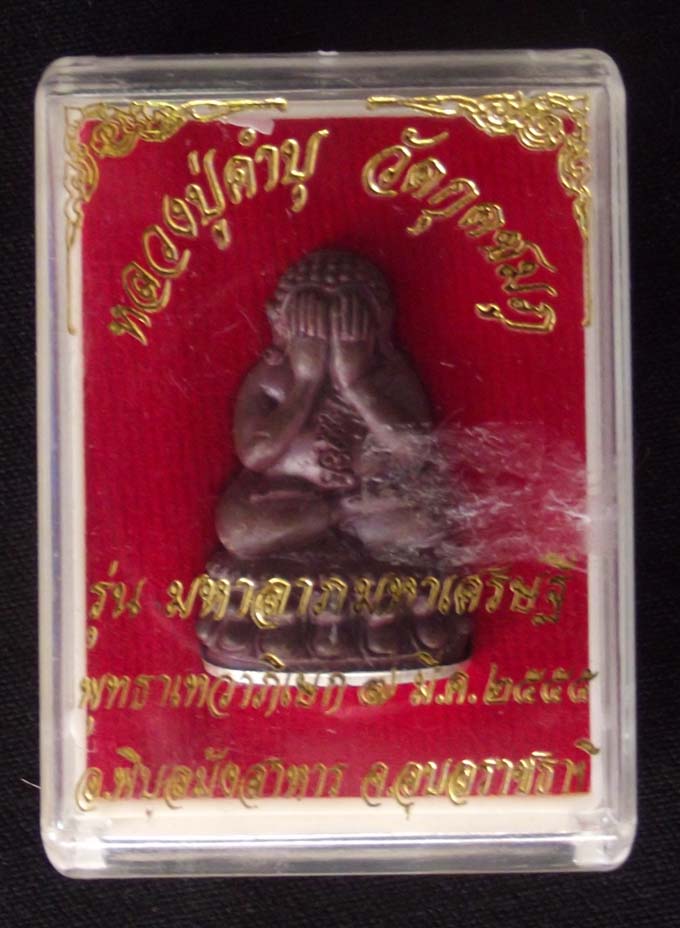 How to Worship + Kata Chanting for Pra Pid Ta