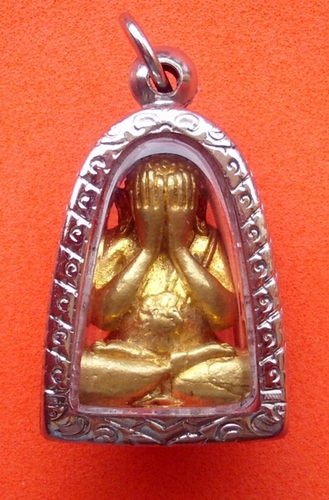 Made on the occasion of auspicious astrological alignment of 'Sao Ha' day, to commemorate the 108th birthday of Luang Phu Hmun of Wat Ban Jan. Empowered by Puttapisek and then released in the year 2543 BE. Made from Nuea Tong Pasom Chanuan Pra Bucha (brass alloys, with metal from old Sacred Buddha sculptures mixed into the smelting process). In addition, 108 Yantra metallic tagrud plates with Sacred 108 Na designs were melted into these Loi Ongk Metal Statuettes, as well as 14 Golden Na spells.It has the code 'Ma' in Khom as mark of authenticity on the rear face.

An immensely sacred and collectible Bucha item that offers both protection and prosperity ans well as steady improvement of Astgrological influences and realignment of ones auspiciouos signs (Serm Duang).

The first Empowerment Ceremony was held at Wat Pah Nong Lom, on the 8th April 2543 BE. Luang Phu Hmun was the presiding Master of ceremonies along with Luang Phu Gong of Wat Sra Monton (108 Years olf monk from Ayuttaya).

In addition the Puttapisek was attended by the following Master Monks;

Extremely few of these amulets were issued, which were empowered along with Luang Phu Hmuns number one famous Pra Pid Ta Lek Nam Pii Sao Ha amulets, which is almost impossible to find anymore.