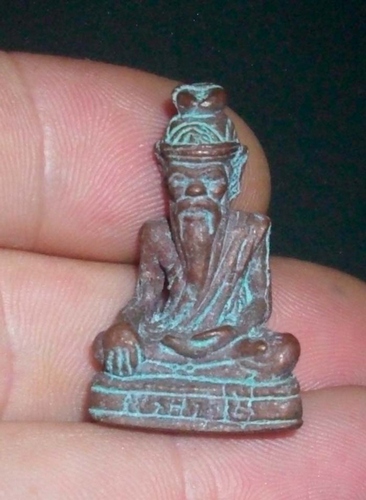 Phu Ruesi Narot
Narot, was originally named Naradha in India, but his name was adapted into Thai language and became 'Narot'. Naradha was the inventor of the Pin (Vina) musical instrument and is therefor connected to both people in musical and performing arts as well as engineers and people who do artisanry, as well as inventors. He is also in the Ramakian (Ramayana Vedic Epic) and is portrayed as one of if not the most powerful of all the Ruesi in that time. Even Hanuman could not beat him and had to ask his forgiveness and even beg for help once. Ruesi Narot is the Major Kroo in Thai Ruesi-ism and is revered by almost all Thai people.
These Ruesi amulets have been made and blessed 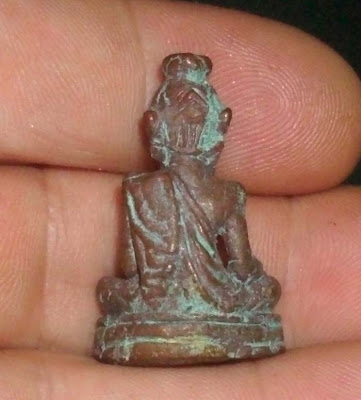 This is just one of a large series of Ruesi amulets which were created and blessed at Wat Bang Bon temple in Bangkok, in a special Puttapisek/Tewapisek ceremony with both Monks and Ruesi present to preside over and perform the ceremony. 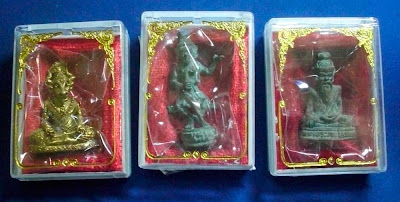 The Ruesi were the great Guru teachers of ancient India. They heard the psalms of the Deities in the Heavenly realms and wrote them down. These ancient 'Kampir' (Magickal grimoires) were what became the vedas of Brahman religion, and are incorporated into Thai Theravada Buddhist Culture inseparably. The Lord Buddha's first two teachers to bring him to the level of Arupajhana were Ruesi hermit sages, and were only one step away from Enlightenment, which is the step further which Lord Buddha acheived (and for which reason Lord Buddha is higher than the Ruesi ) the Buddha stepped over the impossible abbyss that separates the dualistic thought process and left to the far shore (Nibbana).

See all Ruesi amulets in the store - Click Here!

Kata for Bucha to the Ruesi (This is the correct main Kata for all the different Ruesi);

The Ruesi help us in solving problems in life, and protect us wherever we go. Making Bucha to the Ruesi is what we call 'Khong Mee Kroo' in Thai (things with a master presiding over) - this means that you are connecting with deity from another realm who is helping and guiding you in life. The correct Bucha (Poojah) procedure is essential in order to successfully recieve the benefits of a Ruesi amulet.

The Ruesi are considered the agents of the various arts crafts and sciences and that they brought the knowledge of these arts and sciences down and gave it to the Human Race, in order to help them develop towards seeing the Dhamma, and improve their lives, lessening suffering. It is also believed that the 108 Ruesi were created by Pra Paruehasabodee in order to make them the Kroo Ajarn teachers to preserve all the various possible Sciences and Arts, Wicha which could be found in the three times and spaces, and to bestow these great Wicha upon the Humans. The origins of the Wan Kroo (Master day/Guru worship day) comes from the legend that Pra Isworn Maha Tep (Shiva)  cast a spell upon 19 of the Ruesi and turned them into ash, which he then bound in a crystal colored cloth and sprayed it with Amrita; From this spell was born Tewarach (Deva Raja), with a crystalline diamond body, riding a golden deer as his mount.

If you wish to know as much about the Ruesi as there is to know in the English language, then watch out for the upcoming issue of '108 Ruesi legends' which shall be released on the Buddha Magic E-Publications site in 2011 as an ebook to download (price will be about 40US$ for about 300 pages of ebook with color and b/w pics).

His task was to protect and maintian the integrity of Pra Sumen (Mount Meru, the holy mountain which is the whole universe on all dimensions spaces and times). He is the Ajarn of all Magical and Scientific Wicha, and also is an Ajarn to the Devas and Angels, faeries..  Paruehasabodee means 'Thursday' (Pra Paruehasabodee is the Deity of Thursday) - for this reason, Thursdays are the day to have 'Wan Kroo' (Bucha day) to the Ruesi, wich is the traditional official day for making a Master day Wai Kroo to the Ruesi on.
These amulets featured here were made to help us Humans on Earth, and intended to distribute at an affordable price, despite their immensely sacred and magical empowerment ceremony and the auspiciousness of the occasion, and presence of great masters at the ceremony.