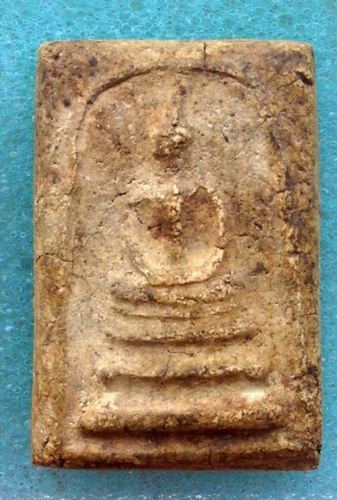 He made the amulets before the grand 2500 BE Opening of the Gru, during the time when people still used to fish the canal from the base of the Chedi. When the Gru was opened in 2500 BE, he then placed more of his Pra Somdej in there, and began to hand them out in 2502 BE. He continued to produce more editions until 2507 BE, the Year in which he passed away. Luang Ta Pan was originally a Citizen of Chonburi, where he was a Looksit of the Great Master Luang Ta Ee.

This is the first 2502 BE Edition amulet, and is in addition a 'Than saem' (Niyom), rendering this example as both a very rare and valuable collectors piece of competition standard.

Luang Ta Pan also made many other Pim, such as Pim Klang, Pim Kanaen, and Pim Pra Nang Paya, Pra Sivali, Pra Kroo Moon, and even made images of Luang Por Tuad and Somdej Toh himself.