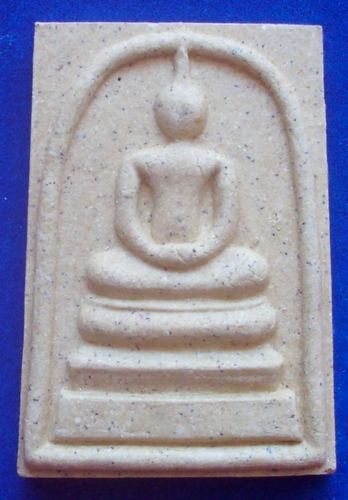 Made from 200 year old roof struts from Wat Rakang Temple shrine room from the time when Somdej Dto was alive, as well as mixing a rich formula of other sacred and magical ingredients into the sacred powder. A quantity of wood powder from Wat Rakang Temple roof is mixed in to the amulets, making them a piece of Wat Rakang History. This is the first time ever in the History of Thai amulets that wood from the Uposadha roof of Wat Rakang temple has been used in Muan Sarn sacred powder. The Somdejs are made in two materials, a light colored one in 'Pong Itije' (one of five famous sacred powder used in Pra Somdej and also in Wat Bang Nom Kho amulets), and a dark colored one in 'Pong Ya Wasana Jinda Manee'. This Line of amulet creations along with the Ruesi Chiwok Gomarapaj amulets, and the second empowerment ceremony, was Masterminded by Luang Phu Juea of Wat Klang Bang Gaew (Nakorn Pathom). LP Juea is direct apprentice to the Great Luang Phu Bun of Wat Klang Bang Gaew, for whose Ya Wasana Jinda Manee amulets are famous the World over. 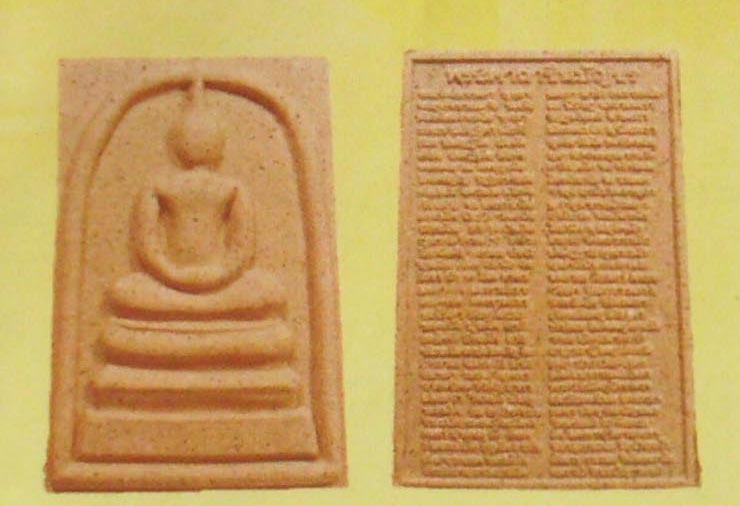 Comes in original box direct from the temple, without casing. The amulet was blessed by dozens of famous monks including Luang Por Phern, Luang Por Pae and Luang Por Uttama 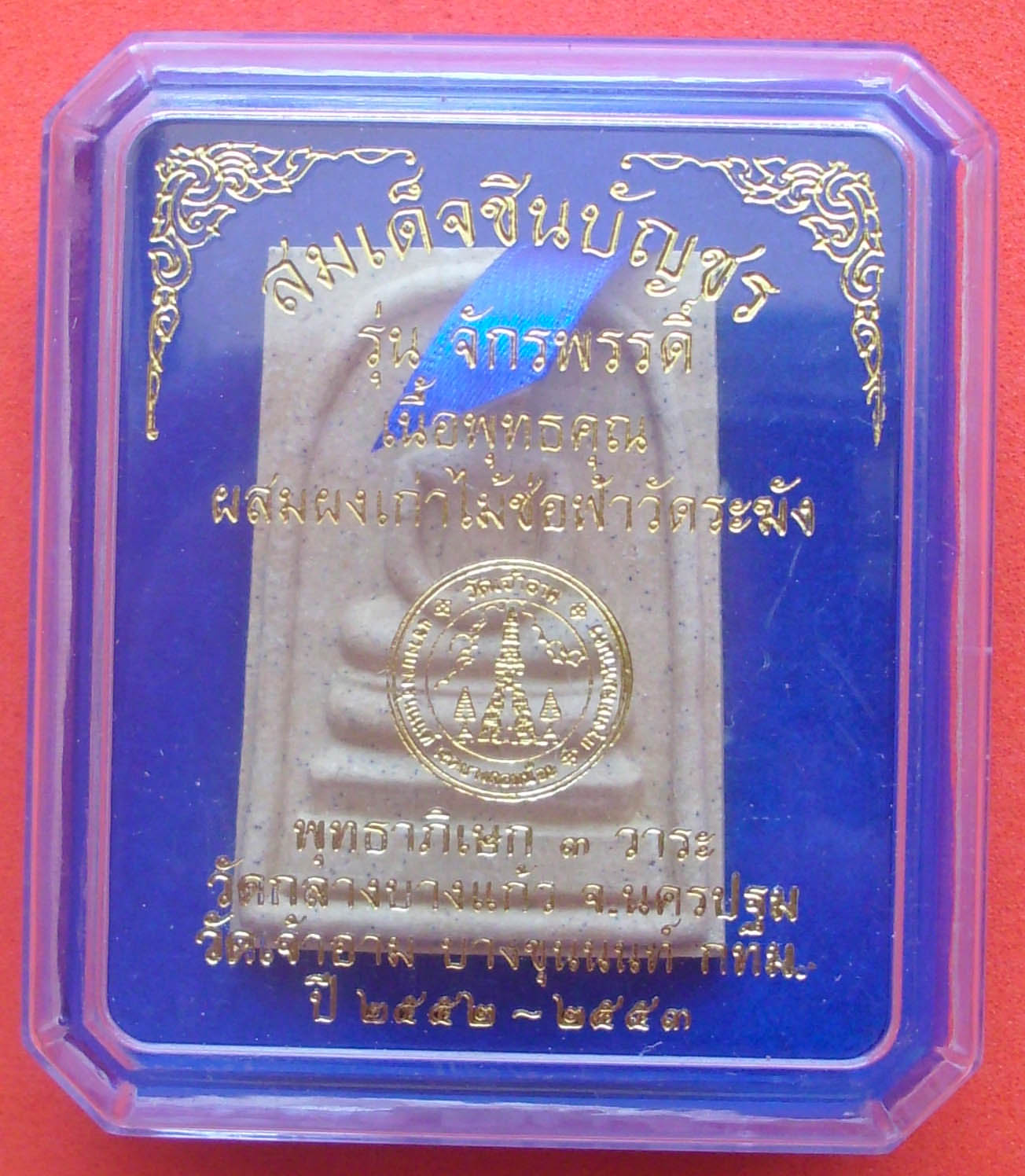 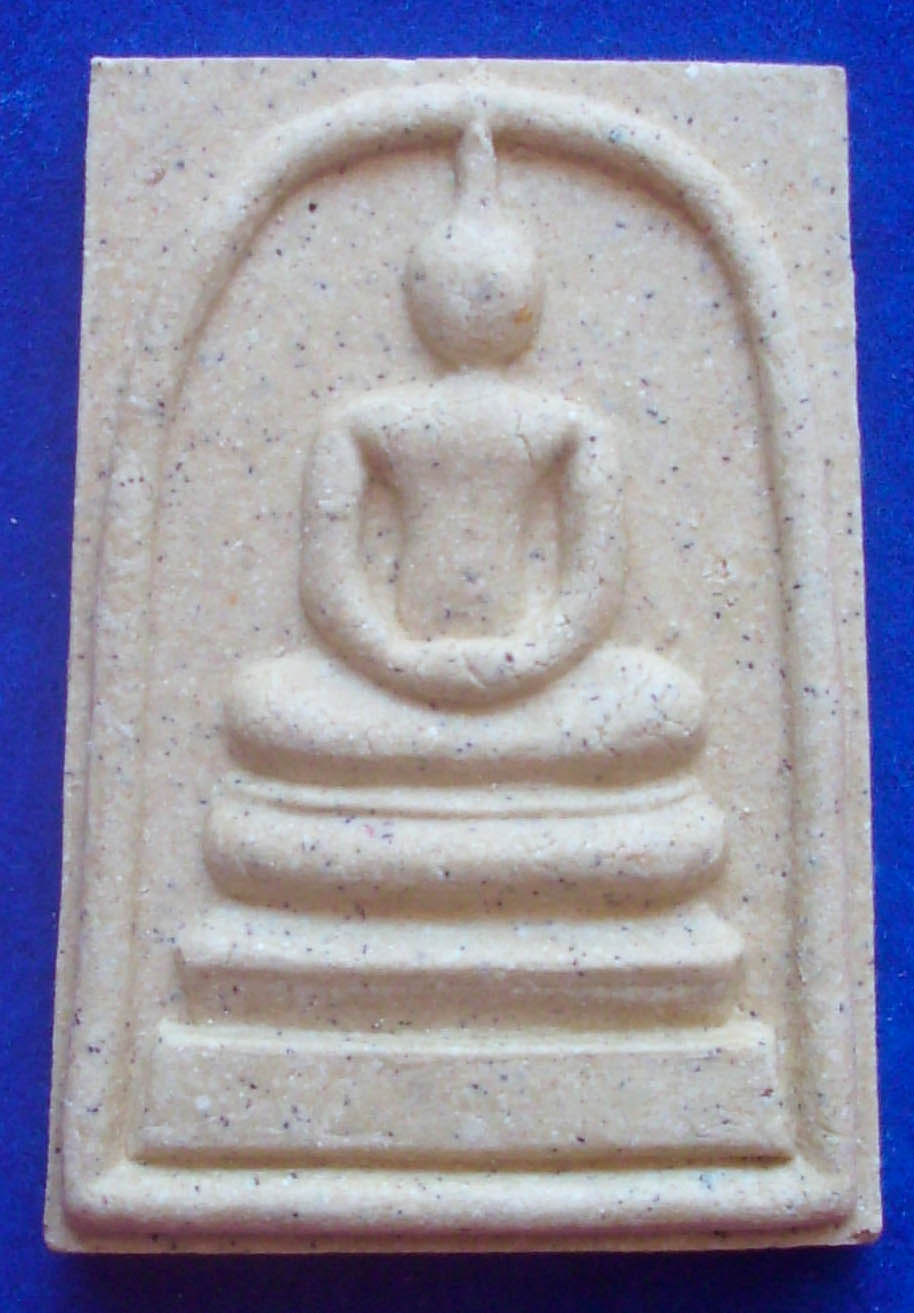 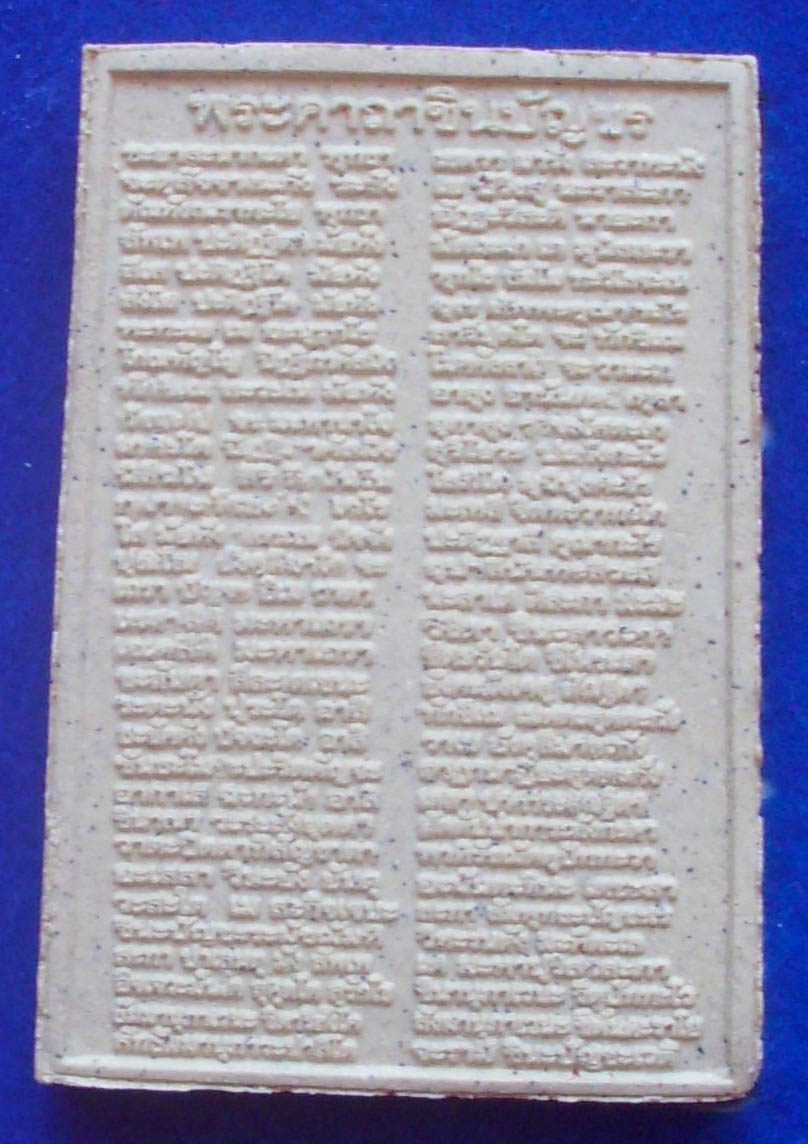 These amulets have enjoyed the honor of recieving Various Puttapisek empowerments on different occasions.
First Puttapisek blessing was made in 2535 BE for the 'Pra Somdej Chinabanchorn Gae Jag Mai Chor Fa' and 'Somdej Tip Mongkol amulets', with a massive array of some of Thailands most famous and respected gaeji Ajarn Master Monks! 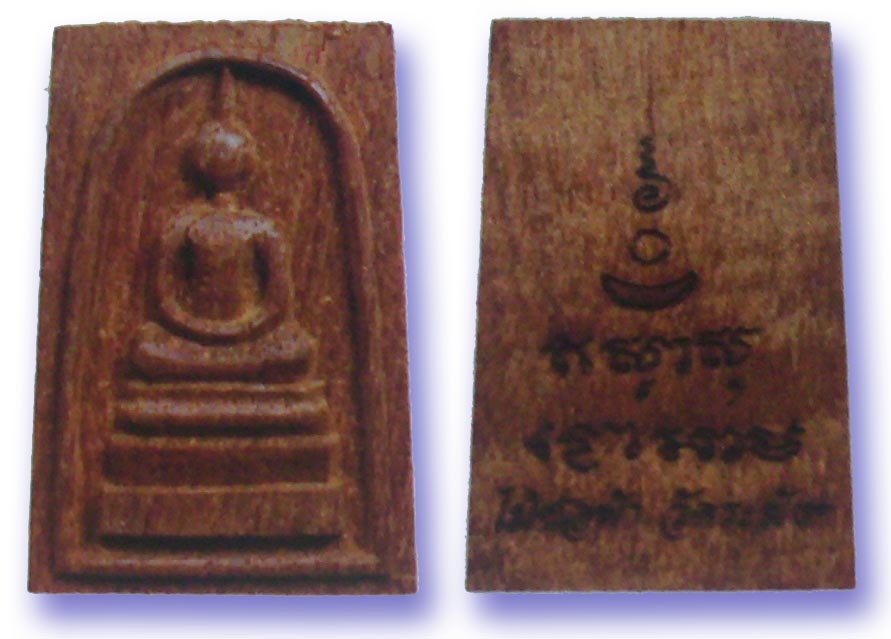 LP Juea is a Great Master famous for his 'Bia Gae' shell rattle amulets to make rich and prevent poverty, and famed for his empowerment of Ya Wasana Jinda Manee sacred powder. These amulets are some of the last amulets he would bless and empower before his passing away. Many other Master Monks also attended the Ceremony. 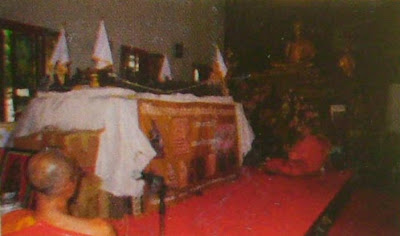 The third empowerment ceremony for the Phu Chiwok Gomarapat and Run Jakapat Pra Somdej amulets was heldat Wat Jao Arm once more, with the chanting of the Pra Kata Bhojjangka Paritta and Puttamont Osot (108 times). It was chanted in the Uposadha building (main Shrine room/Chapel) of Wat Jao Arm during a three day empowerment chanting ceremony which took place between the 8th and 10th of January 2553.


Pra Pong Luang Phu Tuad 'Run Dtri Paetch 53' and 'Run Gamagarn Pised' editions.
Main base sacred powder ingredients of the LP Tuad amulets are; Mai Chor Fa Wat Rakang (wood from Wat Rakang Temple roof), Din Kakyayaks earth (used in the original sacred Luang Phu Tuad tao Reed amulets - essential magical earth from a swamp in Pattani). After this main base mixture is made, each amulet was then made by adding different amounts of different powders to specialize each model with; Pong Puttakun and Pong Ya Wasana Jinda Manee, and Mai Mongkol powders were used. 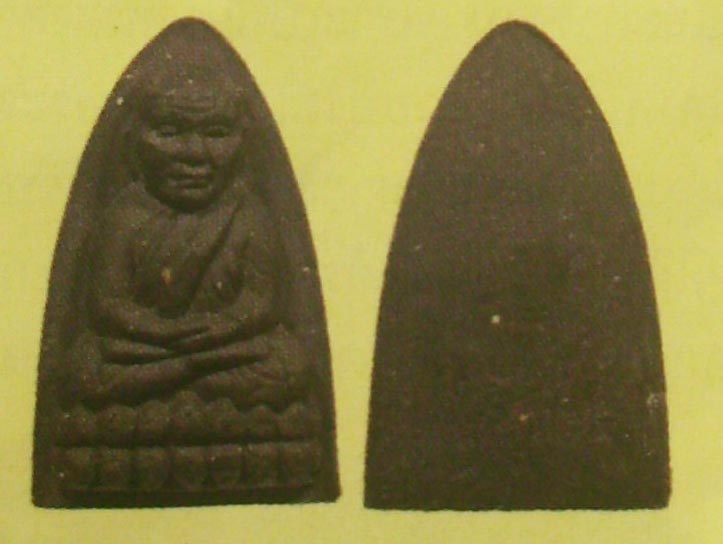 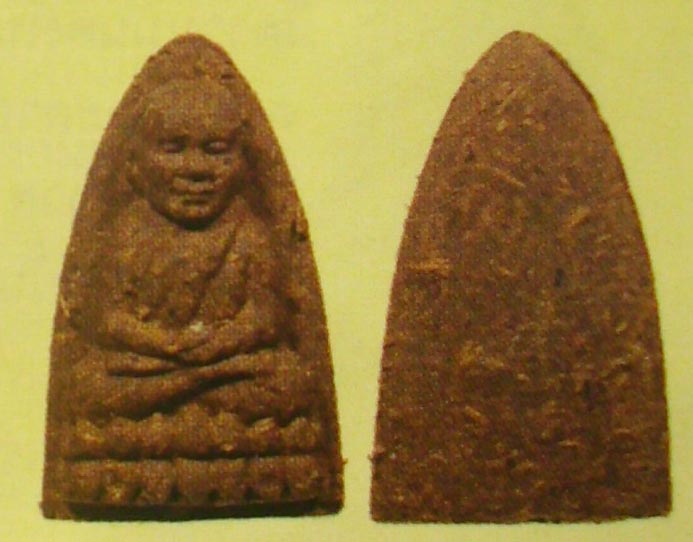 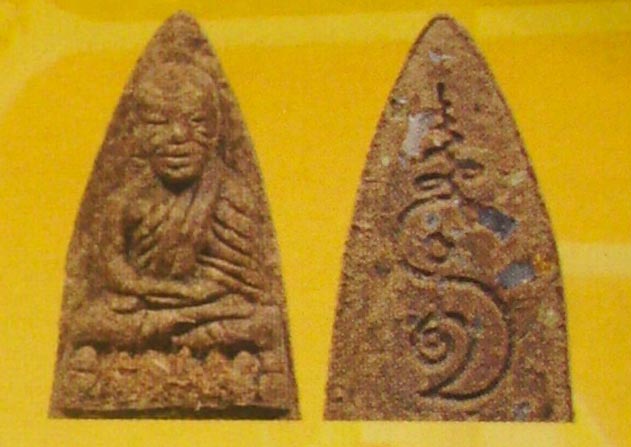 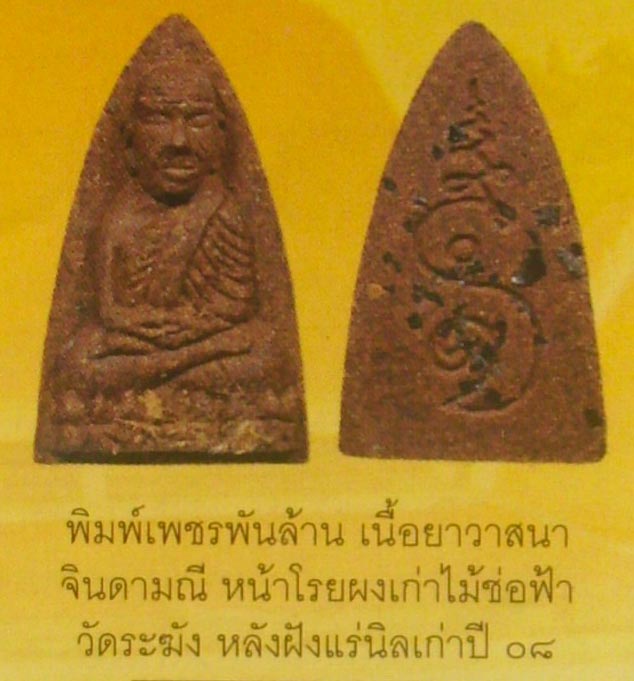 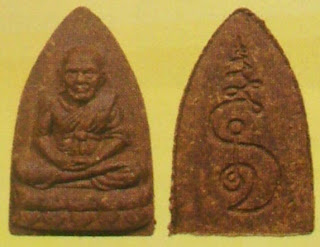 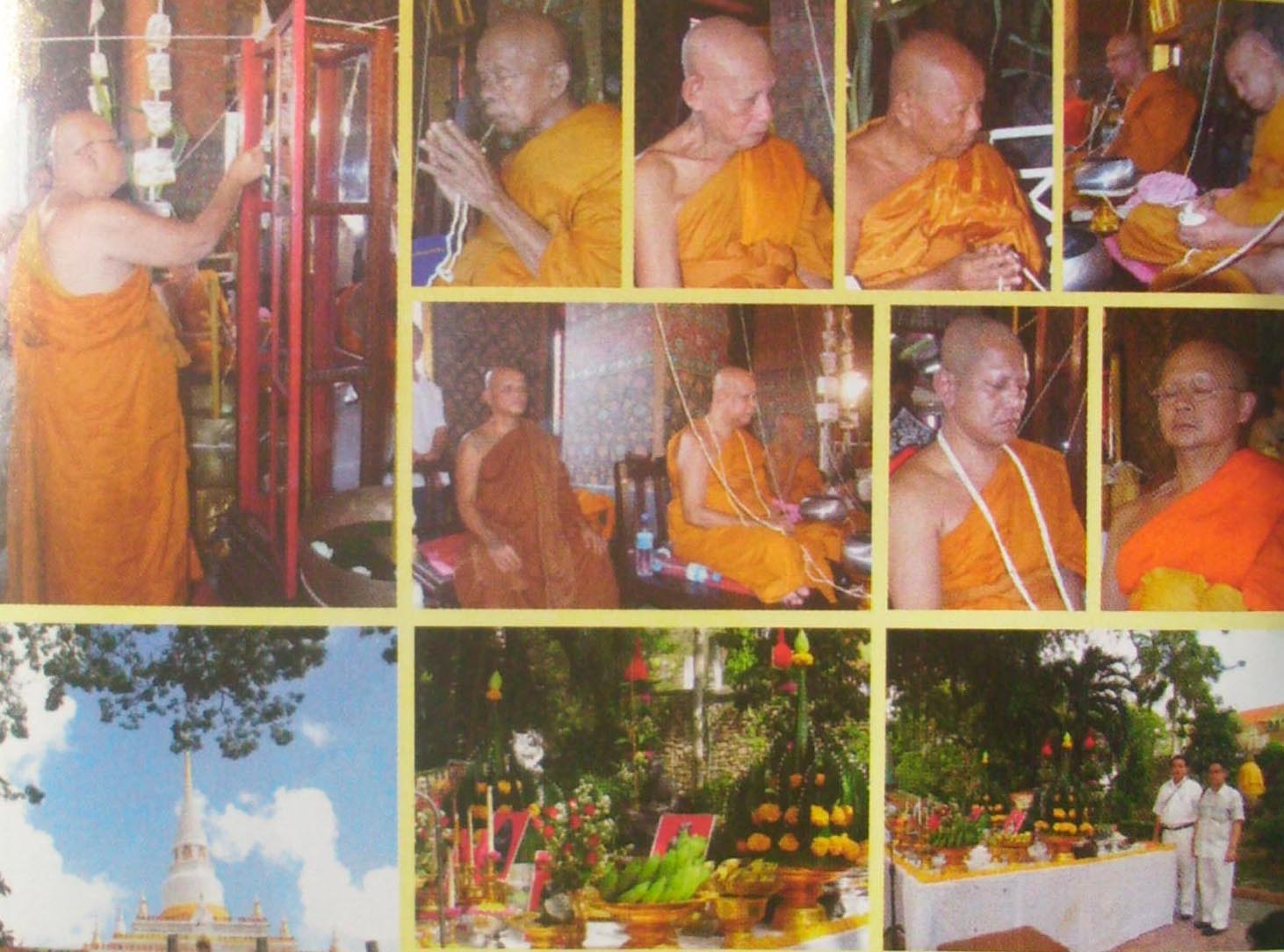 Becoming the Buddha: The Ritual of Image Consecration in Thailand (Buddhisms)

Funds from these amulets go to finance the project to buy some land for Wat Jao Arm, so that they can build facilities to have enough space to be able to offer the various services needed from a temple (wedding, funeral, and other social religious events). The temple has not enough room to be able to fulfill the requirements of the local people, and needs to expand.

Anisongk (rewards or benefits of donating land to the Sangha)
The benefits of this kind of merit making by donating land for a temple has the following benefits;
The person donating will always have a home and an abode to stay, will never be homeless. The person will always be born into a life with his or her own home and property, and have plenty of money and possessions. The work life and home life will be steady and balanced and move forward confidently. These benefits come because of the act of creating usable space for the public use and benefit, be it for the Sangha or the Lay community, both benefit from this project. The more people who come and use the lace and receive the benefits of it, the more your rewards of your merits will be. This is a direct act of preserving the Buddha Sasana into the future, and the Merit is immense, if given with true heart.
Below; The piece of land which is intended to be bought for the temple of Wat Jao Arm 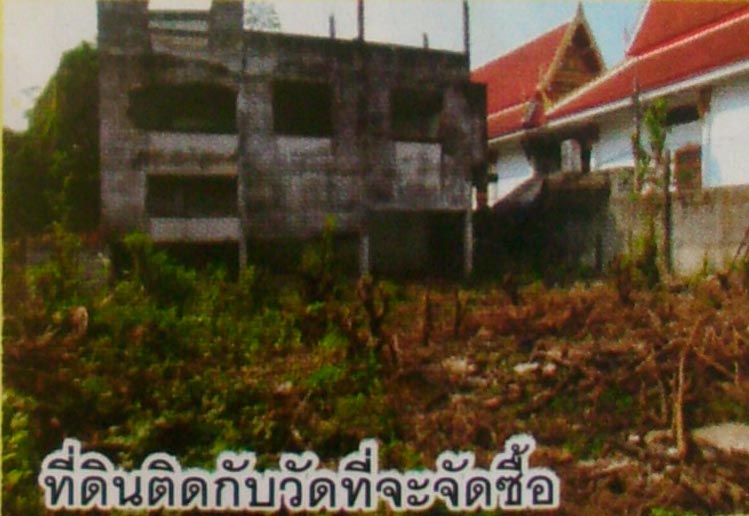 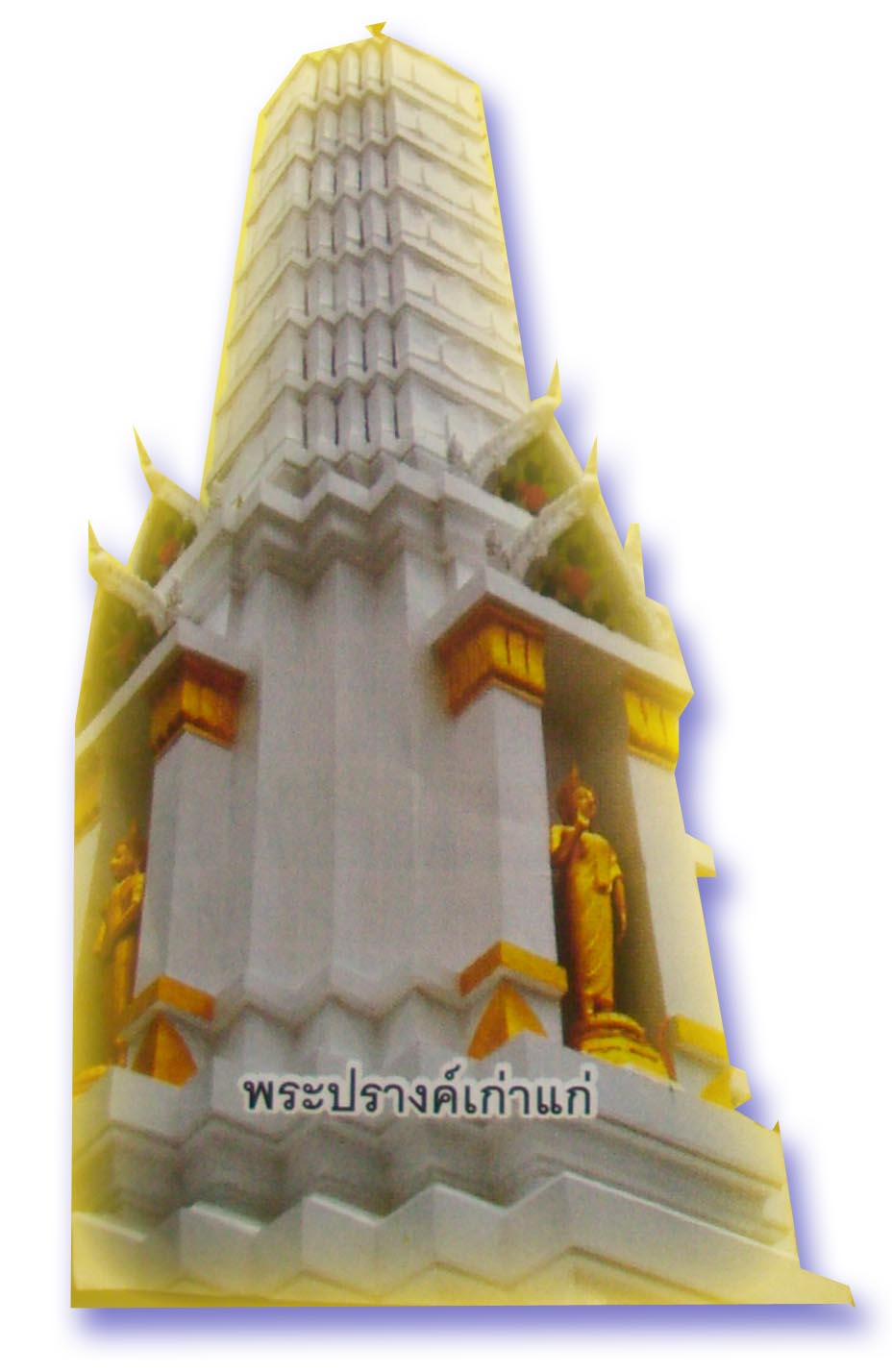 Wat Jao Arm is situated in Bang Khun Nont in Bangkok Noi. It is a very old temple of the Tonburi Era, which was built by Somdej Prajao Taksin Maharaj built in 2322 BE. He did it in honor of his Concubine called 'Arm' who was known as 'Jao Arm'. He simultaneously built a Chedi Prang stupa for the ashes of Jao Arm to be placed in. The temple use to be surrounded by greenery and was pretty much wilderness, but now the population has increased and the temple grounds have become very tightly pressed to provide enough space for the various religious service which the public needs to have provided (funerals, weddings, ordinations, merit making, prayers, meditation lessons etc). Luang Por Tong Lam (abbot of Wat Jao Arm), is thus forced to try to purchase some more land to be able to evade the overcrowding. The land is 813 square Wa and costs about 24 million Thai Baht (about half a million Euros!).

Read all about the various Puttapisek empowerment blessing ceremonies given to these sacred items, and See All amulets in this series >>>>