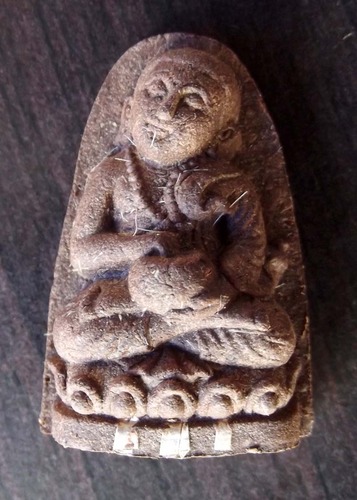 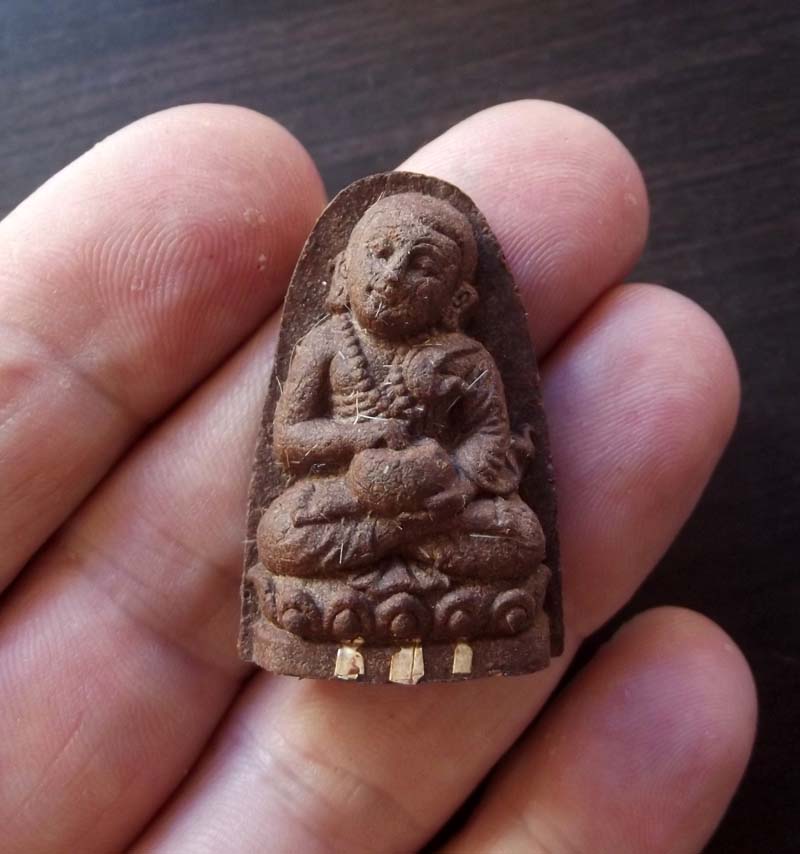 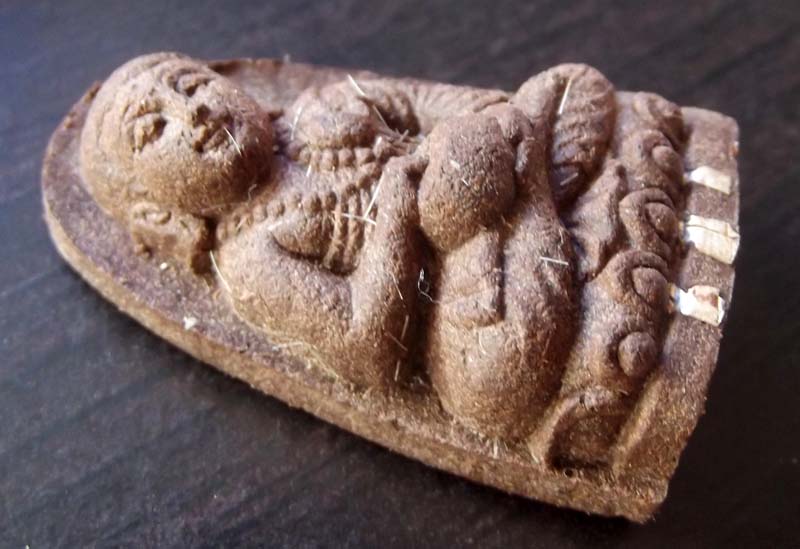 The rear face of the Pra Upakut has a Yant Duang Sethee for wealth attraction The Masterpiece model has the Yantra as a metal insert instead of simply embossed on the amulet using a stamping device. Har from Luang Por Tong Dam is sprinkled into the Muan Sarn. 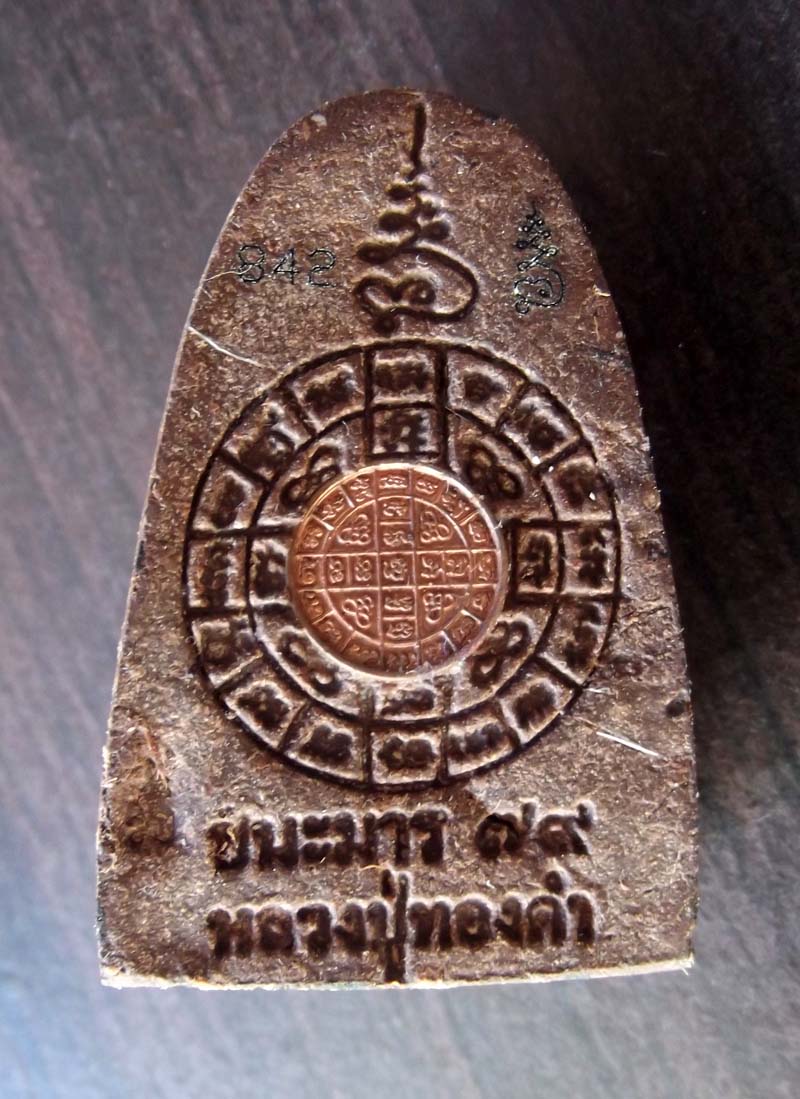 Pra Upakut, or 'Pra Bua Khem' is considered one of the most powerful Protective Deities against Evil Entities and Black magic, as well as being a 'Serm Duang' type amulet (increase Auspicious Astrological influences), and an attractor of Great Riches (Maha Lap).

Pra Upakut , otherwise known as Pra Bua Khem, was an Arahant who the Buddha praised for his great magical powers, and who was said by the Lord Buddha to be the most powerful of all the Arahants. Before the Buddha entered Nirvana, he asked Pra Upakut to remain alive until the coming of Pra Arya Sri Maedtrai (Maitreya), and protect the Buddha Sasana and the teachings of the Dhamma. It is believed by Thai Buddhists, that he is still alive to this day, and resides in a Crystal palace at the bottom of the Great Ocean, with a Lotus leaf on his head, and remain alive throughout the Aeons to rise to the assistance of the Dhamma whenever needed, and to help Sentient Beings.

Pra Upakut is usually depicted sitting eating from his almsbowl with his head turned to the side and slightly tilting upwards to his right side, whereas Pra Bua Khem is made in various Postures or appearances, including sitting inside a Conch, Lobster, Fish or other Marine Life.

If Pra Bua Khem, the head is covered with a Lotus Leaf, and has a pointy head (which is where the word 'Bua Khem' comes from, meaning 'needle sharp Lotus' - this is because the stem of the lotus makes a pointy hat effect).

The Pra Upakut amulet is both protective, and prosperous in its magical effects, protecting from all evils, Black Magic, and physical harm, and encouraging wealth increase and business profits. It is believed that business salesman and traders, shopkeepers will have increased success by worshipping Pra Upakut. 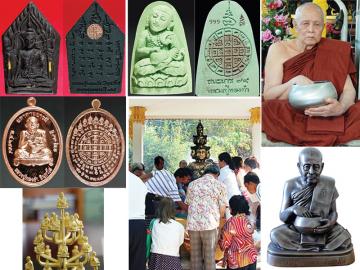 Wat Tham Tapian Tong is an Ancient Temple in Pattana Nikom district of Lopburi. Luang Por Tong Dam is the current Abbot of the Temple. 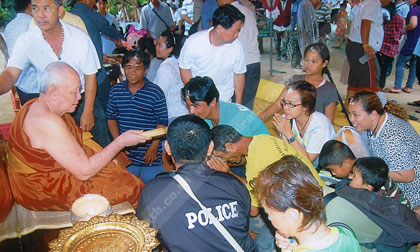 The empowerment ceremony was held on the 21st August 2554 BE, which was the 79th Birthday of Luang Por Tong Dam.

The empowerment began with the 'Piti Suad Bucha Taep Noppakro', which was performed by the Famous Master of Ceremonies 'Pra Kroo Pawana Sope' of Wat Pha Tamma Sope (Lopburi) 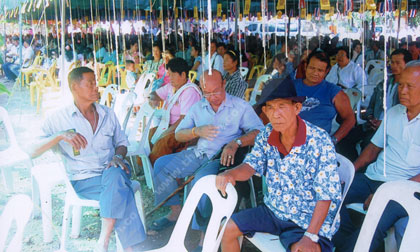 After the Piti Suad Nopakro was finished, the Puttapisek began with 9 Master Monks perfomring the Incantations and Jhanic empowerments;

After the Puttapisek Ceremony was over, blessings were given to all Devotees and holy water spraying performed by the four most Adept Master Monks of the Ceremony; LP Chalem performed forehead blessings and tapping on purse blessing to attract wealth, LP Chaem (first apprentice of Luang Por Koon) performed 'Ko Sisa Maha Sap' blessings (knocking on the head with his hand, a tradition made famous by his Mentor Luang Por Koon), LP Sawad performed Metta oil blessiing inscription on the heads of the devotees, and LP Muean performed the 'long mer maha sap' blessing of inscription of wealth seeking spells on the palms of the hands of Devotees.

Pra Upakut amulets were also handed out to the Devotees who attended and had made merit at the ceremony. The Upaku which were freely distributed were separate from the official edition and were made from Nuea Mai Taep Taro, which is the wood of a tree which Southern Thai people believe to  be inhabited by a Deva spirit and which brings riches, keeps Demons away, increases luck, and protects from harm.