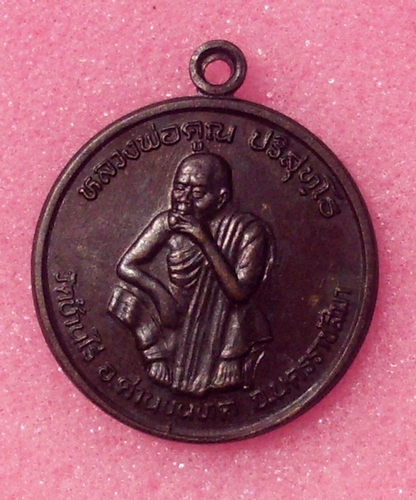 This is one of a varied range of Luang Por Koon Monk coins that were issued in 2537, the last year to really see mass produced amounts of amulets issued. After this, Wat Ban Rai ceased issuing so many editions and reduced the amount of amulets made in each edition, and also regulate the frequency with which they were issued. For this reason, it is difficult to find many monk coins from befor 2536, and after 2537. LP Koon Monk Coins were once a common sight in the amulet markets, but have now grown ever rarer to find, and are becoming ever more sought after as they become ever harder to acquire, and prices slowly but surely rise.

The Front Face features Luang Por Koon in his famed sitting position, leaining on one leg smoking a cigar. The Rear Face has an Astrological 'Duang Maha Sethee' for attracting Wealth, and 'Yant Ong Pra' (Buddha image as a Yant) for protection.

The Simplicity of this Humble but obviously advanced and Enlightened Monk has gained the Reverence of all Thai people from common Farmers to the Highest Ranking Members of Thai Society. Even a Biographical Movie and a Song was made about this Internationally famous Farmers Son, who has come to become a symbol of Humility and Compassion for Thai Buddhists the World Over.

If ever there was such a thing as a Miracle Monk, then Luang Por Koon is One of Them.