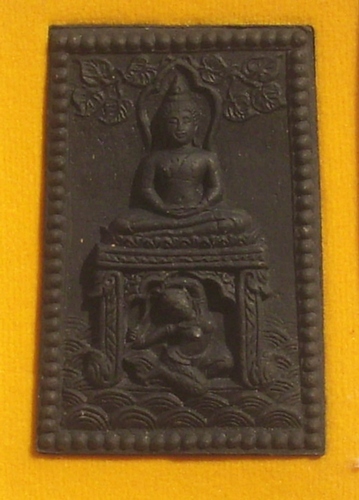 Run Plod Hnee Twee Sap (do away with debts and double possessions and wealth edition). Beautiful Buddhist art is applied to the creation if these sacred Somdej type amulets. The front face depicts anm image of the Lord Buddha himself sitting on the Throne of Enlightenment under the Bodhi Tree and the Earth Goddess Dharani (or, 'Pra Mae Toranee', in Thai) squeezing a tumult of water out of her hair, and washing the Maras away. The rear face of this particular edition of the range of amulets issued as Run Plod Hnee Twee Sap is in 'Nuea Pong Paya Ngiw Dam Pasom Din Kakyayaks' (Ngiw Dam is a sacred tree which has a tree spirit dwelling within it, Din Kakyayaks is a black peat-like earth found in a sacred marsh in Pattani, said to have immense powers of Kong Grapan. Din Kakyayaks is used for the making of Luang Por Tuad amulets).

Made in 2552 BE, by Guru Monk Luang Por Tong Dam Intawaso of Wat Tham Tapian Tong, Lopburi. Lopburi is home of Many Great Masters of Khom Wicha and Saiyasart, because of its Khom History and proximity to the Khmer Kingdom - the Wicha to be found in Lopburi is very close to the Khom Wicha, and one of the most powerful of all provinces of Thailand.

LP Tong Dam is a learned Master and Practitioner who incorporates all important aspects of Thai Buddhism into his amulets and in addition, maintains the quality of Buddhist Art and Religious Artifact making to the same standards of the past, and does not allow the advance of the modern age to influence his interpretation of the content of the amulets.

This amulet for example, is a perfect example of how Thai Buddhism is interwoven with the Brahman belief in Deities and the Animist traditions that were surely already here before the advent of Buddhism. The Buddha shows Buddhism, and the Dharani Deity shows Brahmanism, as well as Mae Posop Fertility Deva of the harvest and the grain, showing the Animist beliefs.

The beauty of it all is, that none of these three belief systems can be offended in any manner by these three images being put together, because they all fit together in harmony and do not contest each others existence.

3.6 x 5.6 Centimeters in size, this is a relatively large amulet.