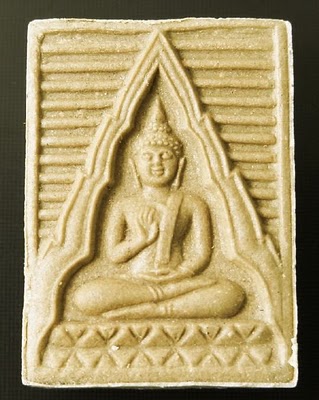 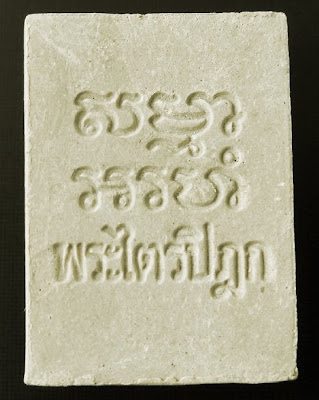 This is the sixth edition of the famous Wat Pak Nam amulets and was created in the year 2533 to enable the inscription of the Tripitaka in stone, at Puttamonton Buddhist World center in Thailand. The amulet contains some of each of the previous 5 editions of Pak Nam amulets miced up in the sacred powder. The amulets were blessed by Pra Racha Brahma Thaera (Wira Kanuttamo), who is a great practitioner of Vipassana, and vice abbot of Wat Pak Nam in the present day. He is a direct lineage student of Hlwong Por Sodh in advanced Dharmakaya method. He attained the completion of Dharmakaya method as he was still a nvice monk, and stayed in the same Kuti as LP Sodh. I recommend this amulet for ladies as well as for people who need metta and good fortune.The amulet is quite petite and quite fitting for women to wear.

The Path to Magga Phala: The Method of Samatha Vipasssana Meditation

The making of the Wat Pak nam amulet;
His reverence Jao Khun Pra Taep Mongkol Muni ( 'Hlwong Por Sodh')was the first to make these amulets, to distribute among the devoptees who came to make offerings for the building of the Bpariyadtidhamma  school at Wat Pak Nam. As LP Sodh was still abbot, he named the amulets 'Pra Khong Khwan' (meaning 'monk/amulet to give as a present to someone'). Hlwong Por Sodh was present tpo bless the first three editions of Wat Pak Nam amulets;

Each edition was composed of  a set of 84,000 amulets (the same nbumber as the suttas in the Tripitaka - this is a traditional practice in the making of amulets according to Wicha Pra Somdej, as given to Somdej Pra Puttajarn Dto Prohmrangsri of Wat Rakang by Ajarn Saeng, which he in turn took from an ancient stone with Khom inscriptions which he discovered in an old chedi stupa which was broken open.
The tsecond and third editions were distributed to devotees in the temple until about 2515, when they ran out completely, and so the 4th edition of Pra Khong Khwan Wat Pak Nam was created. But Hlwong Por Sodh was not present for the Puttapisek blessing of the fourth editon of Wat Pak Nam amulet (which has now come to be known as 'Pra Tammakhant') , for he had already passed away in 2502 B.E.
Apart from Pra Khong Khwan, Wat Pak Nam has released various other amulets in the last half century, all of which have become extremely popular.