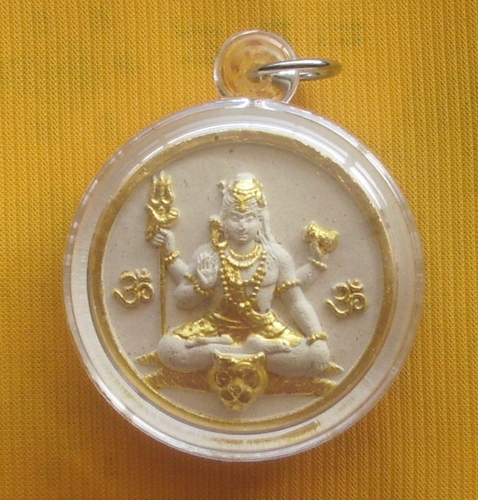 Kroo Ba Subin Sumetaso created and issued this Pra Isworn (Shiva Ruesi) with Pra Pikanes (Ganesha) Deity on the rear face, along with his Yee Gor Hong gamblers luck amulets. Made from sacred powders and hand painted gold the amulet features the Shiva Deity sat on a tiger skin with Trishul, and rear face features Ganesha the remover of all obstacles.

This amulet is Serm Duang, Choke Lap/Maha Lap, klaew Klaad, Metta Mahaniyom all in one. Ganesh is a very complete Deity for beinging success and removing obstacles, be they spiritual or worldly. Shiva protects and also destroy the inauspicious things. Shiva is the Maha Rishi (Maha Ruesi) and is thus a very potent and apt deity/amulet for those who worship the Ruesi or those who practice Ruesi-Ism. Kro ba Subin is one of the current Eras most popular amulet makers at Samnak Songk Ban Ran Dtat Pom, in Ta sae, Chumorn. 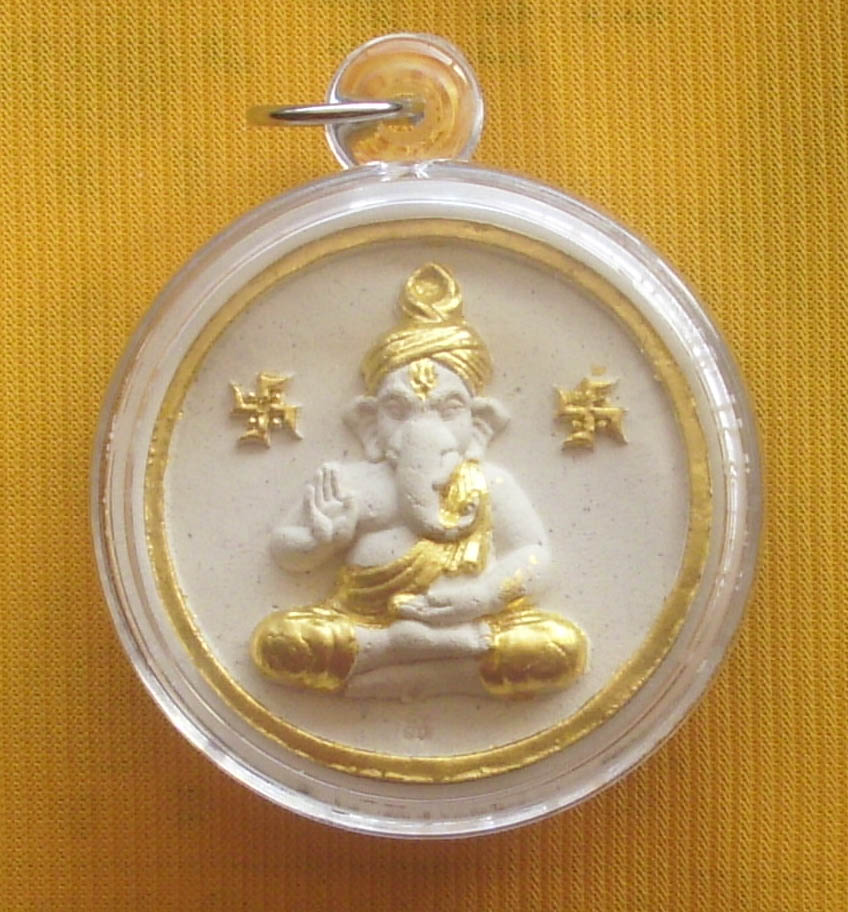 The amulets were made for raising funds to install some 'Thaawarawadthu' (permanent installations such as Buddha statues and edifices, shrines etc) within the Samnak Songk Ban Ran Dtat Pom. They recieved empowerment along with the Por Phu Yee Gor Hong amulets in following sequence;

2000 amulets made in this limited edition. Comes with waterproof encasement included in price, as is the registered International Airmail delivery.

Kroo Ba Subins Thai-Chinese Yee Gor Hong Gambling Deity for Lucky streaks and riches was also issued with this range of amulets. This is a tried and tested amulet which gained much popularity in Singapore, Malaysia, Hong Kong and Taiwan with the Gambling community. Made by Kroo Ba Subin Sumetaso of Samnak Songk Ban Ran Dtat Pom, in Ta Sae, Chumporn. Kroo Ba Subin has gained much popularity with his powerful Lanna Wicha and is strong in Wicha Luck, Fortune and Popularity charms because of this and his Gumarn Tong effigies. The Shiva-Ganesh amulet is useful to those who practice Yogic practices, bvut is also good for every other profession from soldier through politician, to artist and dancer. Ganesh is Deity of all Artisans and Artists, and Shiva is both saviour and destroyer.