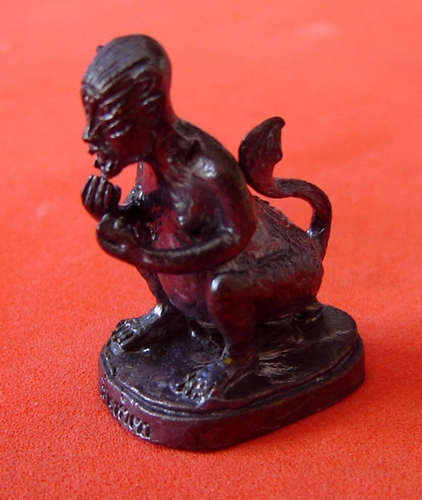 Taep See Hoo Ha Dta is a Deity whose tale appears in the Norhtern Lanna Tradition, and is reputed to be an  Manifestation of the Amarint Deity. Made and empowered by Kroo Ba Aryachat of Wat saeng Gaew Potiyan. The Deity is a powerful creator of wealth and also protects from Danger and dark magic. This amulet is a mini Loi Ongk Bucha statuette without casing for placement on the altar or in the pocket, or purse. It can also be placed in the place of Business.

Read about the Legend of this Deity; 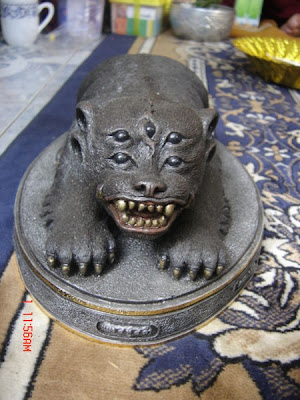 It is supposed to be the reason theat men love their mistress more than their first and main wife (in Thailand many men have a “Mia Hlwong” (main wife) and a “Mia Noi” (second wife/mistress).

The four ears and the five eyes are part of the maintainance of the Buddhist principles of Dhamma practise; namely, Bhramavihara (the four ears representing; four practises of compassion – Metta (loving friendliness), Garuna (Compassion and generosity), Mutitaa (Mutual concern for the welfare of others) and Upekha [equanimity] )

The five eyes mean the five precepts (not killing not stealing not indulging in perverse sexual or adulterous behaviour, not lying and not taking alcohol or intoxicating substances such as drugs)

The first version of this creature “Meng See Hoo Ha Dtaa” (above picture), Meng See Hnaa Ha Dtaa is like a bear a little bit and small in stature, it eats coals and excretes solid gold.

The legend of Meng Si Hoo Ha Ta is called the legend of “Aay Tuggatta”, which goes like this;

About one thousand years ago, there was a city called nakorn Pantumid, with it’s ruler “Pra Jao Pantumit Racha”. The city was a peaceful one withoout any problems, and its ruler Pra Jao Pantumit had seven wives to his name. In this city there was a poor family of three (Mother Father and child) the child went by the name of Aay Tuggatta. When Aay was only four years old, his mother died. After this, when Aay Tuggatta wenr begging, some people had compassion and welcomed him, giving him alms, and others would chase him away. When he was 12 years old, his father sent him to work as a cow herder for a village chieftan, but after not many years, his father bacame terribly sick, and thinking that he would not live for long, he taught his son to have moral precepts, and told him that when he died, he should bury him in the forest until his skull fell off, and then should take the skull and place it on the altar in the house to rever. He was told that when Aay should reach the age of seventeen, that he should take the skull onto a mountain to the south west,; wherever the skull migh get caught up, then there should it be buried, and in that place set an animal trap. If an animal should gte caught in the trap, then he should take it and look after it. After having explained his wishes, his father died. So the young Aay took his father’s skull up the mountain until it got stuck in front of the mouth of a cave, and there he set his trap for the animal. After 3 or 4 days, he returned and found that there was a very strange animal indeed caught in the trap. this animal looked like a bear, short in stature, with wide eyes, green in color. It had all of five eyes and four ears, and he gave it the name “meng ha ta see hoo”, meaning “creature with five eyes and four ears”.

Aay thought that this must be his father reborn as the strange animal, and took it to keep at home, building a small coop for it and bringing it some food and water. But Meng Ha ta See Hoo would not eat anything he gave it, and he became worried, because he didn’t really have much time to care for the animal, due to the fact that he had to work as a cowherd every day. It was cold season, and so when Aay returned home from work, he lit a fire and burnt it to make coals. It so happened that one of the hot coals sprang out of the fire and landed near meng ha ta see hoo; with great hunger in his eyes, meng ha ta see hoo ran forward and snatched the burning ember of coal and ate it. Aay was curious to see if meng ha ta see hoo would eat the rest, and let him approach the fire, – the animal wolfed the coals down as if they were a plate of delicacies! the next day, meng ha ta see hoo dropped dung that was pure gold, and many pieces were they indeed! When Aay saw this, he began to bring hot coals to the animal each evening to eat, and each morning there were piles of golden pellets to collect, which Aa then took and buried under the ground to hide them. Some time later, there was rumors and news of the great beauty of the princess Pra Nang Sima (daughter of Pra Jao Pantumid Racha, the ruler of the realm) being spread around the nation. many people wished her to accept their marriage offers, and lords and ladies and nobles in their hundreds began to appear in the district to compete for her affections. 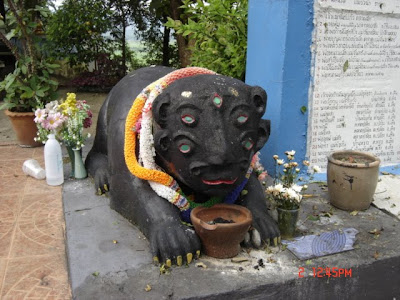 Pra Jao Pantumid Racha began to blame himself that this was all because of greed for wanting to keep meng ha ta see hoo that he was trapped inside the cave, and began to thiink he would surely die there. Then the land slid a little further and there was a small opening in the rocks blocking the cave entrance, and Pra Jao Pantumid Racha was able to shout to his servants to go and bring all 7 of his wives to the cave. They should then open their skirts and let their king and husband see their sexual organs for the last time before he should die. His wives came with great embarrasment and shame to the cave, opened their skirts and showed their private parts. 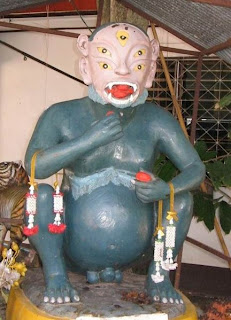 Then something amazing happened; A sound of laughter came from the cave, causing the cave mouth to be opened and unblocked, and Pra Jao Pantumid Racha was able to escape from his entrapment, and crying out in relief to his harem that he would love all of them his lesser wives, more than his royal queen (main wife). When they had returned to the city, they continued living as happily as before, until Pra Jao Pantumid Racha relinquished his throne to Aay (who was now his son and heir to the throne), and renamed Aay as Prayaa Tammikaracha.

There were 7 days of celebrations, and monks of the Buddhist sangha came to preach the Dhamma, bringing with the the Boroma Saree Rikadhatu (Buddha relics) of the Buddha’s left little finger bone, and offering it as a gift to the realm.Prayaa Tammikaracha thus constructed a temple for it to be placed in and revered, and many other temples in the vicinity too. He built wat Doi Khao Kway Gaew, and placed the relic of Buddha’s fingerbone in the Chedi stupa there. This temple is built on the Doi (mountain) which has the cave where Meng Ha Ta See Hoo was found, and is now known as Wat Doi Khao Kway Gaew 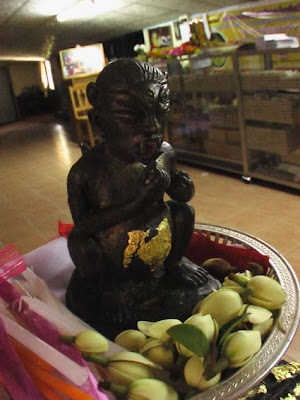 The other version to be found is Paya Wanorn See Hoo Ha Ta.

The version in the picture is from a legend made famous by the Master Monk “Kroo Baa Chaya Wongsaa Pattana of Lampun province – in this legend “See Hoo Ha Dtaa” is in the shape of a monkey, and named “Payawaanorn See Hoo Haa Dtaa”

There is a ritual ceremony which people of Ghiang Rai like to play for to bring luck and fortune, bt playing the game of Meng Ha ta See Hoo. I shall explain this ceremony, and how to perform it as a poojah soon 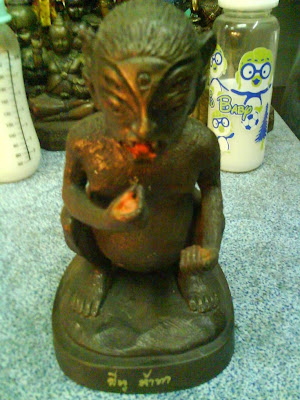 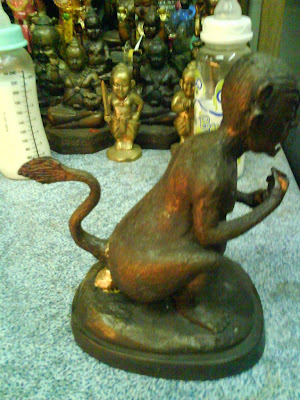 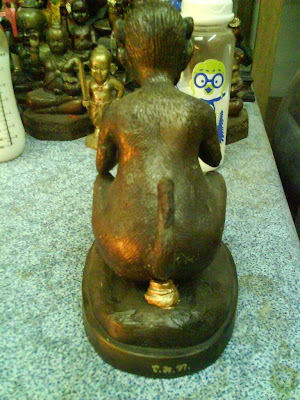 Kroo Ba Ariyachats 'Awk Nirosagam' practice of being enclosed withn a chamber for a period of time, and remain in meditation. The word Niros means to enter the state of non attachment to the senses. The Pra Pid Ta Buddha with hands over eyes and ears, nose mouth and other orifices, means precisely this, to cut off ones sense stimuli, in order to induce Nirosagam.

The Nirosagam ceremony which is presented in the video clips below, was held on 9th January 2552. 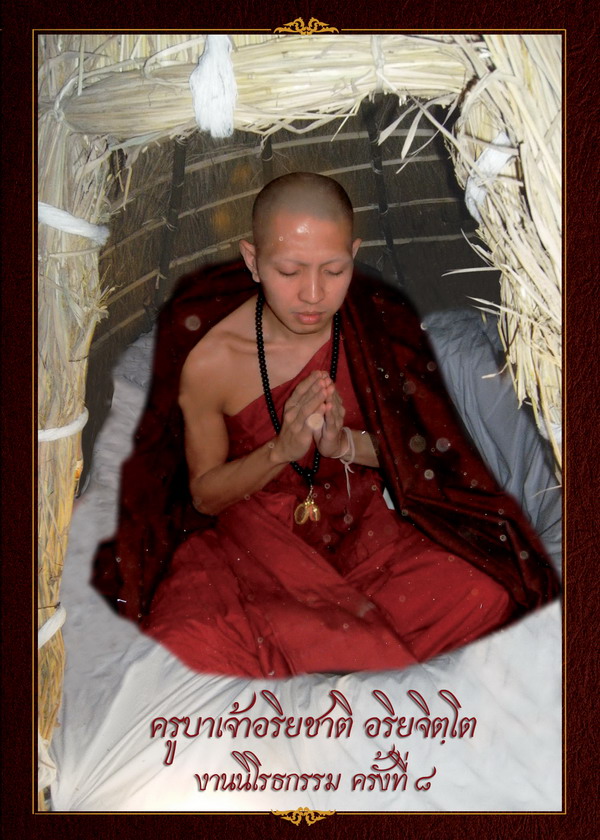 Above; Kroo Ba Ariachat prepares to enter Nirosagam for the 8th consecutive time. 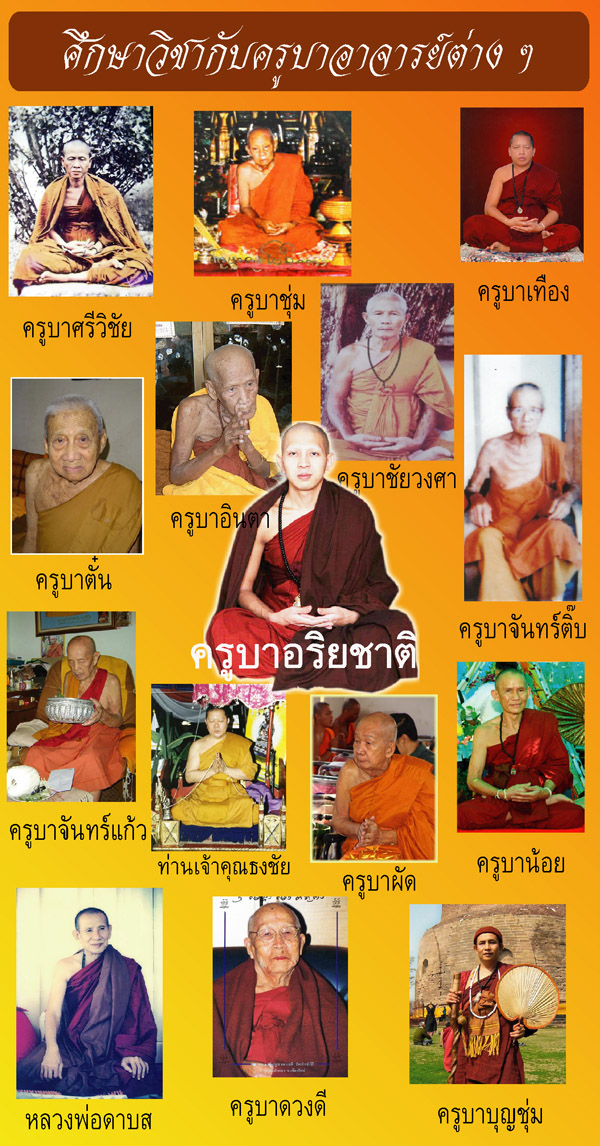 Above, images of the various Master Gaeji Ajarn with whom Kroo Ba Ariachat has learned Wicha with;

You can see a video of Kroo Ba Ariachat entering the eight Nirosagam ceremony below on 9th January 2552. He stays in the sealed space for 7 days, and consumes only water. After this, he came out and headed a ceremony for people to donate dry foods for hims to raise funds to help local poor Folk of the area and to improve conditions for the soldiers and police of the three border provinces of North Thailand. 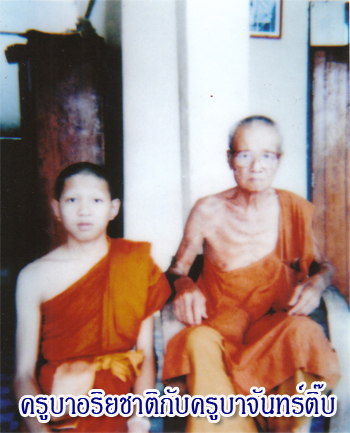 Above, Kroo Ba Ariachat with his Teacher Kroo Ba Jantr Dtip, as he was still a Samanera 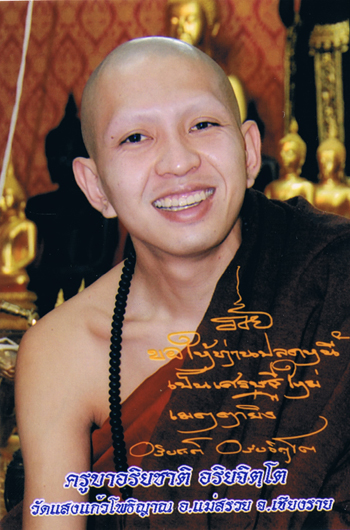 Yoga and self-culture: Higher laws of spiritual dynamics including outline of philosophy of the Vedas, Upanishads, Bhagavad Gita, and the six systems of Hindu philosophy / by Deva Ram Sukul 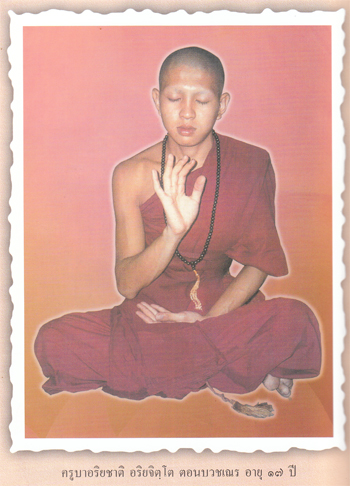 Above; Kroo Ba Ariachat as he was stil a Samanera of 17 years of age - he was already advancing to the level of Mastery in meditation and various Wicha even at this age.