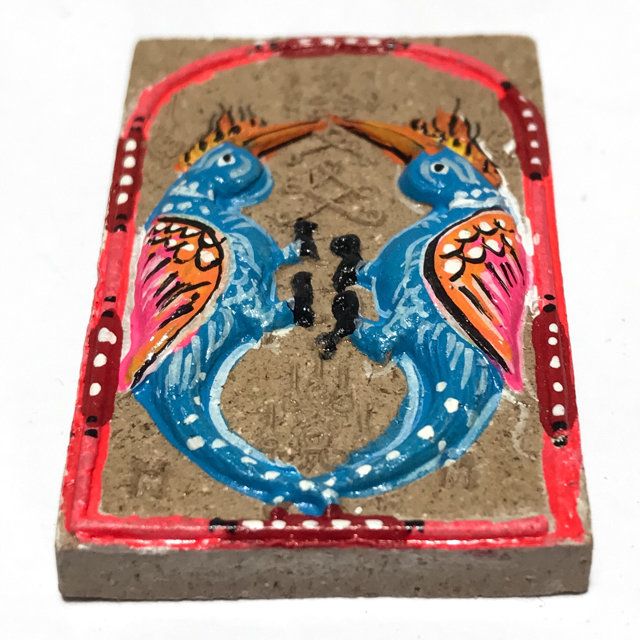 The Muan Sarn Sacred Powders for this edition was created using amulets from earlier successful editions, which were ground down into powder again using the Nibbana Sutra, and then reanimated into these new forms of the Sariga Dong, and Reinvoked a second time. This amulet has a special Free Offer if you continue reading down the page; 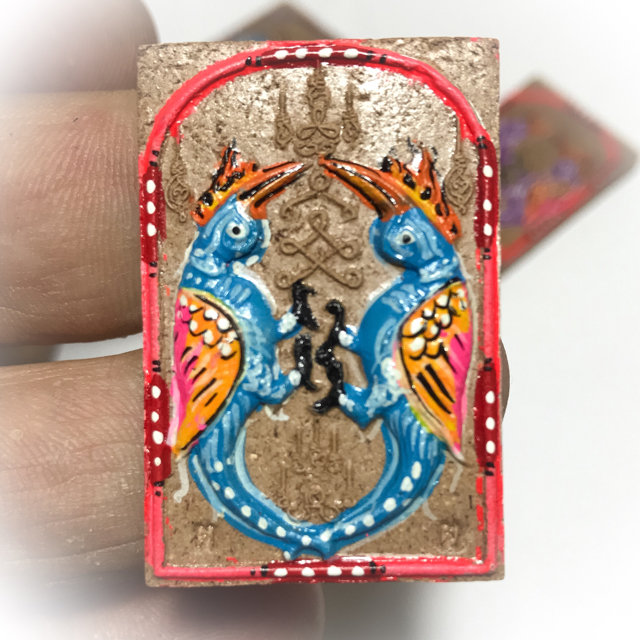 This Pim is a Pim Lek, and measures 4 x 2 Cm, and in this version is painted with blue bird body and pink wings with orange crest, and red-pink arched border frame. The Sariga Dong Hang Giaw has the tails entwined in sensual embrace and harmonious coexistence. A very popular amulet with ladies and also with the Gay community, for its smaller size and powerful Metta Maha Niyom Maha Sanaeh Mercy Charm and Seductive Influence (Power of Attraction), as well as being famed for inducing Lottery Wins, and Increasing Successful Business and Professional Advancements.

This amulet can be obtained for free when purchasing items which add up to 100$ or above, by first adding items to reach 100$, and then adding this item to the order afterwards. The add the below coupon code to the coupon code textfield before checkout, to get a full price reduction, obtaining this amulet for free, with casing included. If you use the coupon code, do not choose 'Waterproof Casing' option as we will encase it for you anyway. if you prefer no casing with the free coupon option, please state this in your order notes at checkout. 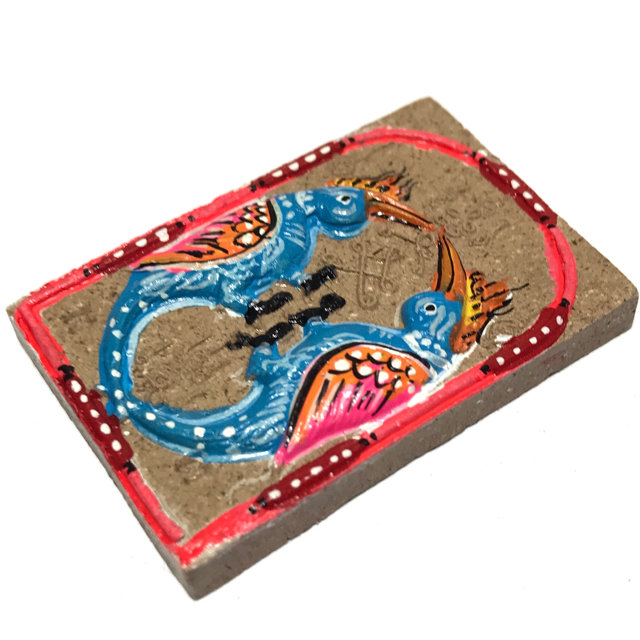 The Sariga (sometimes also called 'Nok Garawaek') bird is empowered with spells with the Invocations of Maha Sanaeh, for Seductive Charm, and Maha Pokasap for Prosperity. Very popular with shopkeepers, and traveling salespersons. The Takrut Sariga is Unisex and can be worn by both men or ladies to use equally successfully for seductive influence, mercy charm, good business, and increased popularity. 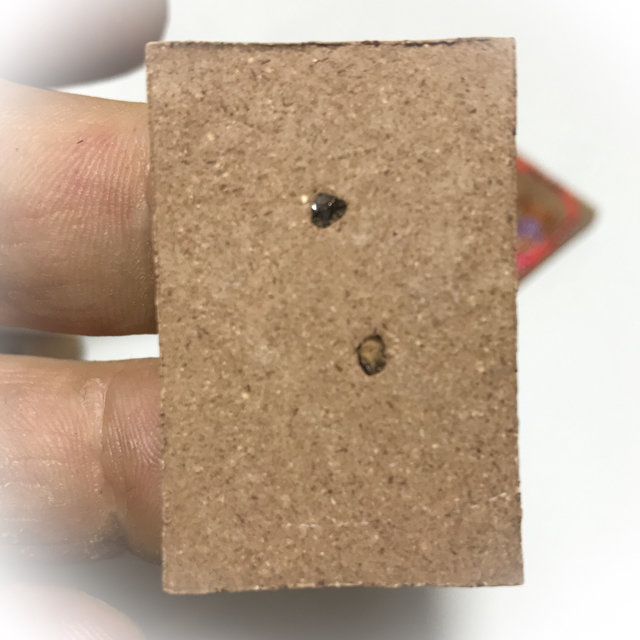 The Nok Garawaek, and the Nok Sariga, are heavenly birds which are more or less synonymous with each other, for which reason, you can use any of the Kata Incantations which are used for the Nok Sariga Celestial Magpie. 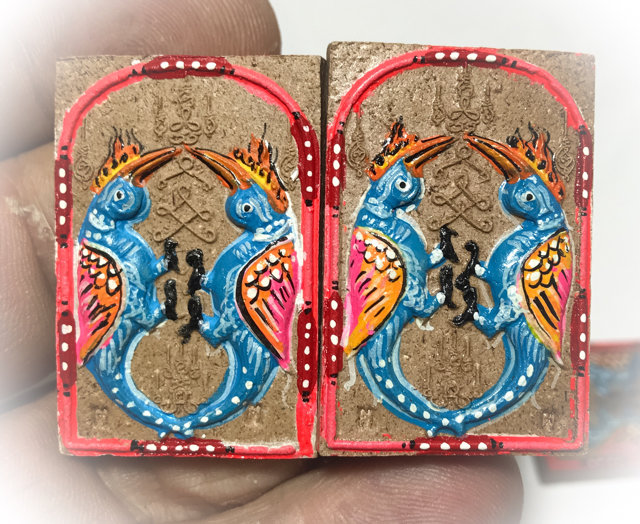 The Nok Sariga (or, ‘Salika’) is a Golden Tongued Heavenly Bird which is attributed with immense Metta Mahaniyom and Maha Sanaeh qualities, and is along with the Hongsa, one of the Best Devas to seek assistance in ‘Jerajaa’ Magic (convincing speech).

Jerajaa means ‘Discussion’. The Golden Tongued Sariga bird enchants and charms the listeners of he who possesses the Wicha, bringing a hypnotic and charming effect, to influence and convince, making people see things your way. Good Business is to be expected with the Takrut Sariga. 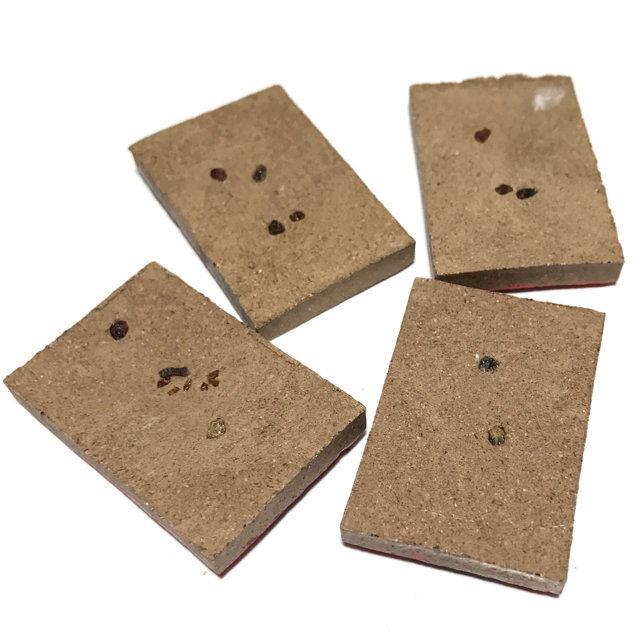 Magpies are known for their tendency to pick up shiny glittering objects, such as jewelry, and whisk them away to their nests, ad hoard them. This is no different when it comes to the tendencies of the Celestial Magpie, who is indeed just as attracted to treasures as any Magpie. 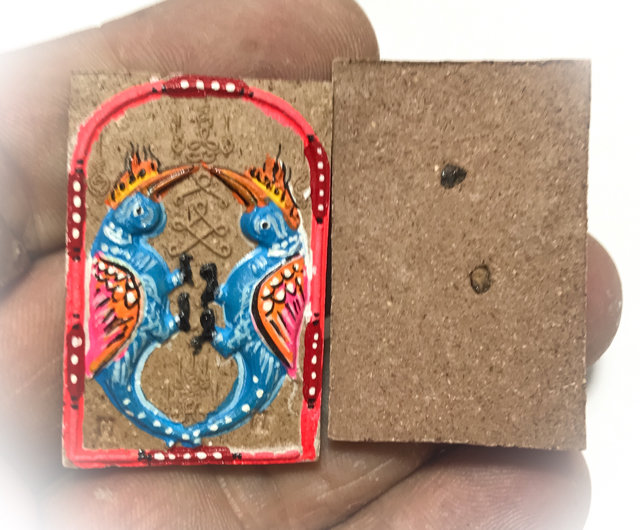 Kroo Ba Krissana Intawano is also an accomplished Sak Yant Master, who is less known for his Sacred tattoos, than for his amulets, which is in truth only so, because of the ultra high profile and international attention that his world famous amulets have received. 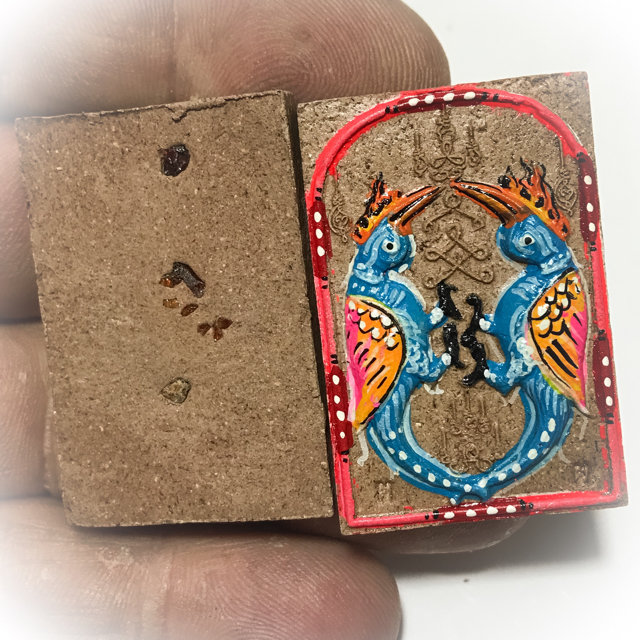 This has served to slightly disguise his many his other accomplishments, such as the many expansions and construction of edifices for the temple he has brought into being, his Sak Yant Thai Temple Tattoos, His Teachings, and his many forms of blessings, such a Holy Water Spraying. 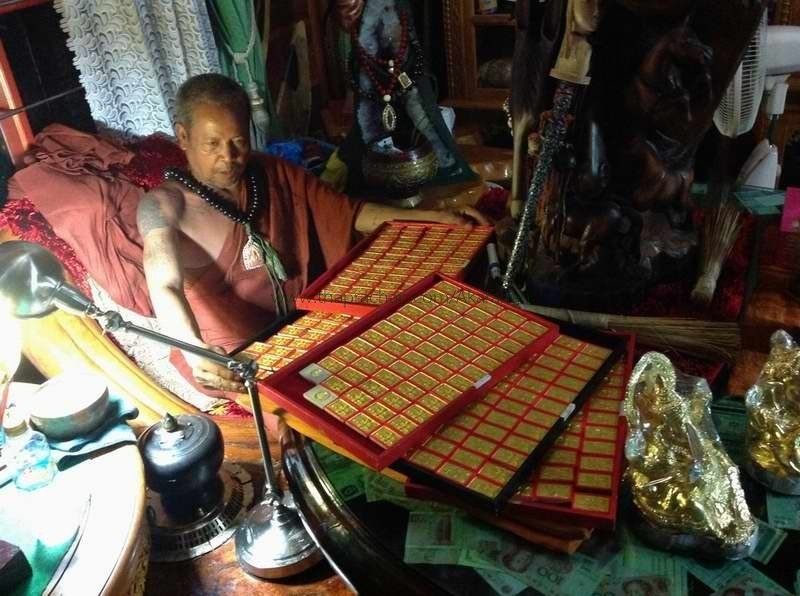 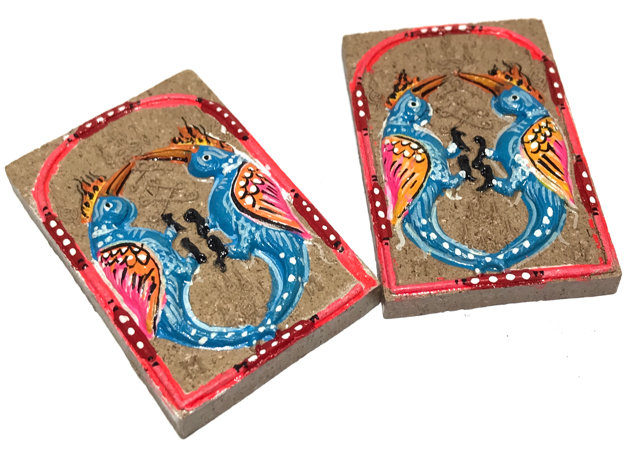 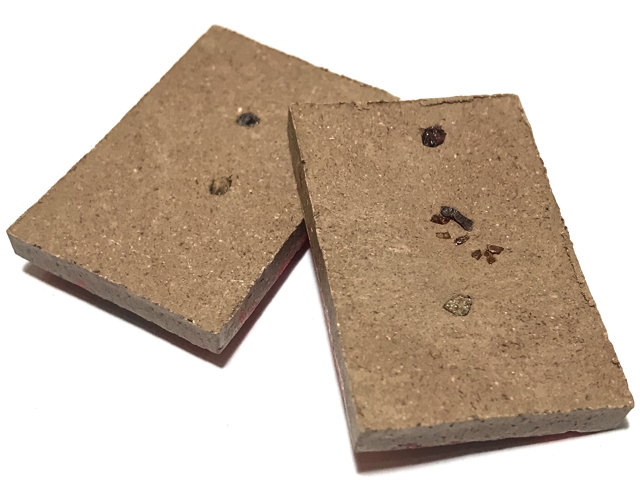 To make and empower amulets, Kroo Ba Krissana uses a very secret and mysterious Wicha named 'Montr Teerayaan'. He studied this Wicha under his kroo Ba Ajarn Phu Ruesi Bangbod in Laos. Besides the unique Wicha Montr Teerayan, Kroo Ba Krissana studied a number of many other Wicha in Cambodia. 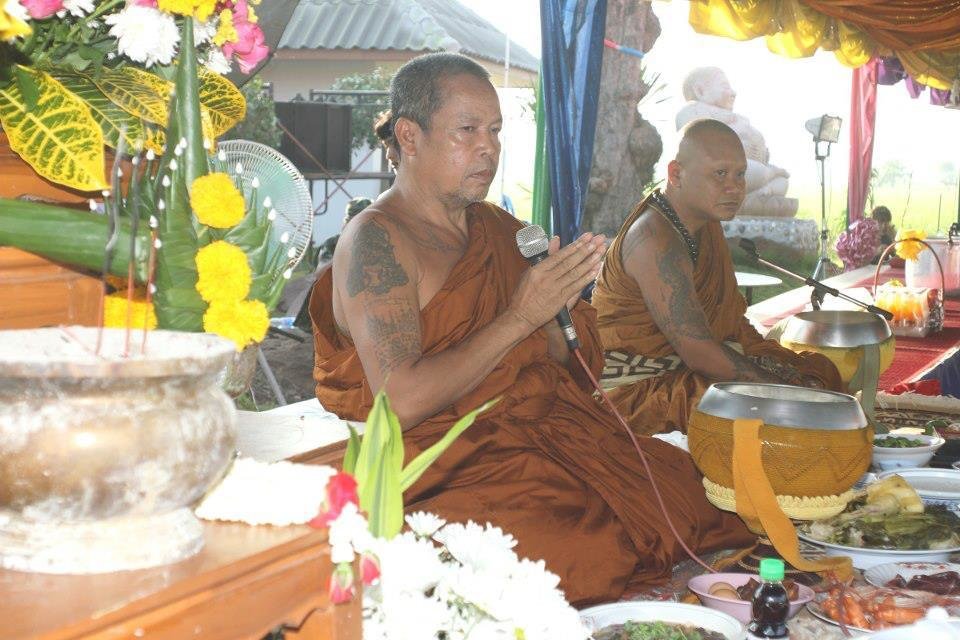 It took him about twenty years of intensive study and practice to fully master the teachings of the various great masters he stayed with during his time in Cambodia. 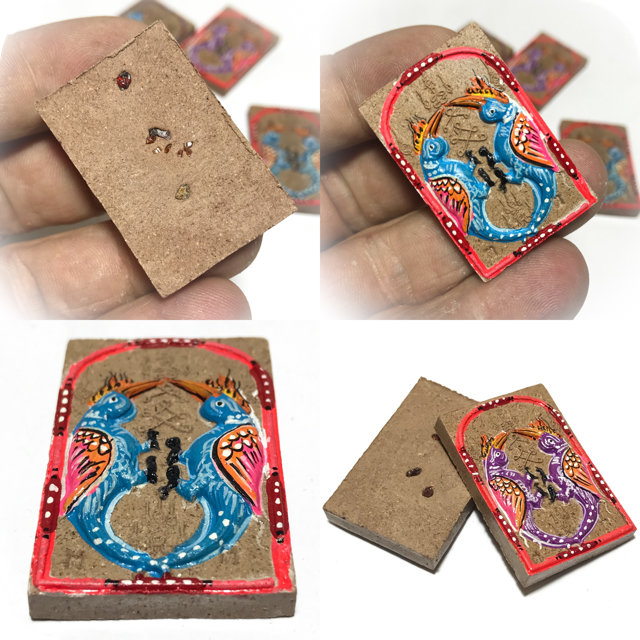