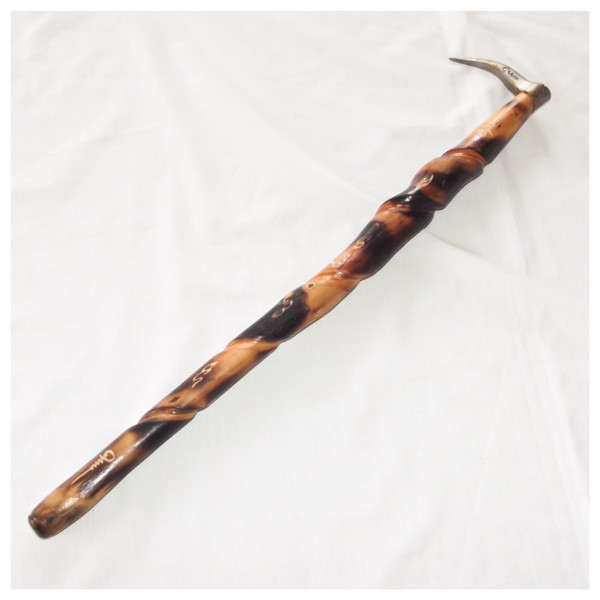 An extreme rarity is this Takhor Chang Riak Sap, which was one of a very few numbers, given to Luang Phu Hongs for special blessing, as a special item that was not mass produced or issued in official release. The Takhor Chang is shaped in the design of an elephant goad ritual instrument; 'Khor Ngern Khor Tong' (money, customers, and treasure calling hook). "Takhor' means 'hook' and insinuates with the syllable 'Khor' (to ask for/beg for), and thus is Metta Mahaniyom and Maha Lap, but also has Maha Amnaj for the ability of the Goad, to steer and coax such a large, and single minded animal as an elephant.

The Ritual Hook, is made from a Sacred Vine wood that is found winding its way into ever more entwined embrace with the trees around it, and connecting them as if in loving embrace of the fourth dimension, a whole forest embraced with the vines that intertwine them.

The Vine is called 'Thao Hlong' and is said to be the 'Vine of the Lost' for those who enter into it's embrace are forever lost and can never find the way back out of the forest again.

Blessed in Buddha Abhiseka by Luang Phu Hongs Prohmabanyo of Wat Petchburi (Sussan Tung Mon). Luang Phu is now deceased Master Monk, whose amulets are now disappearing as his devotees collect and keep them at a constantly increasing rate. Some editions were made in large numbers for which reason those editions are still expected to be available for some time, but his rarer and more special limited editions and special releases are now already extremely difficult to come by. 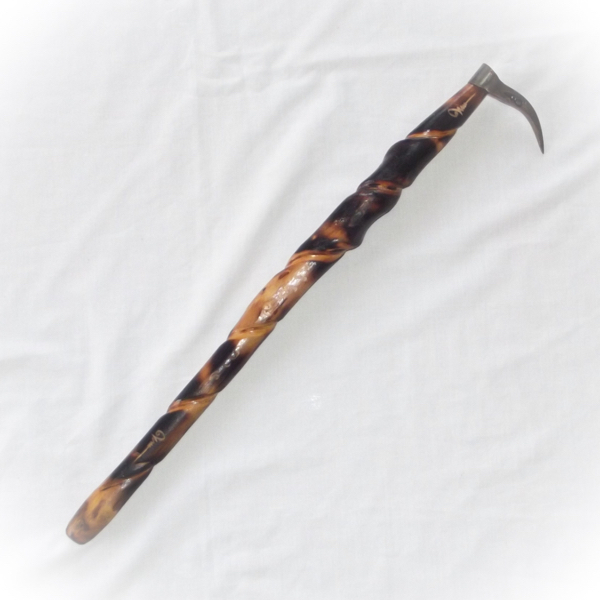 The Vine is for its endurance factors, Kong Grapan and 'Kong Ton' (Invincibility) Magic, and for its aspect of entwining itself in a tight embrace with that which surrounds it, has Powerful Maha Sanaeh Attraction Charm inherent within its twisted wooden interior. Luang Por Prohm has Empowered the Vines as wands with inscriptions, and given the Maha Amnaj Incantations of the Elephant Goad Ritual Weapon. 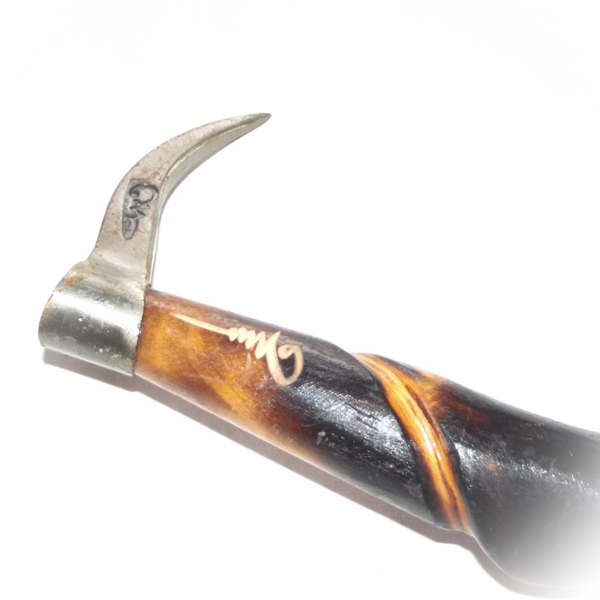 As a punisher or banisher of ghosts and demons, it is a powerful weapon to clear the air with a swipe and an incantation around the room, or to perform earth magic using it to insert into the earth to call in, send or channel earth energy or other magical forces depending on your own choice of invocations or your abilities & powers. It's Maha Amnaj commands not only your Lovers, but also Enemies and Maras, Ghosts and Phantoms. 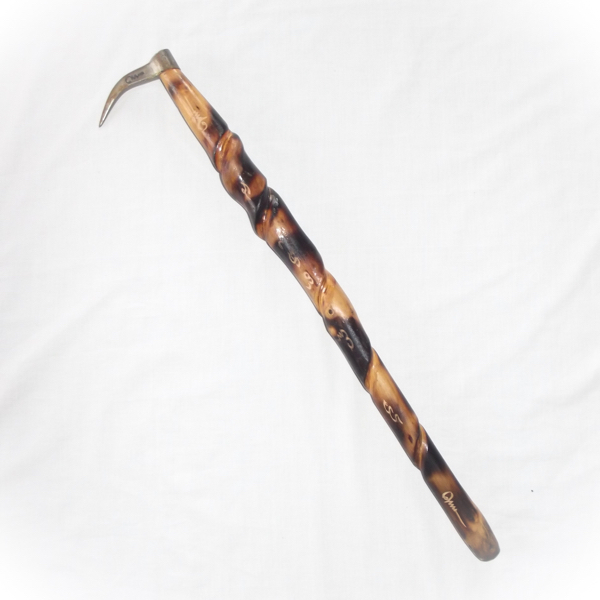 Even the Celts and the Druids knew of the spiral force of Magic, and the spiral twisted vine is a Magical Plant of First Class Qualities and Natural Earth Powers. Most definitely, this wand is meant for Earth Magic, when it comes to Elemental Magic Practices. 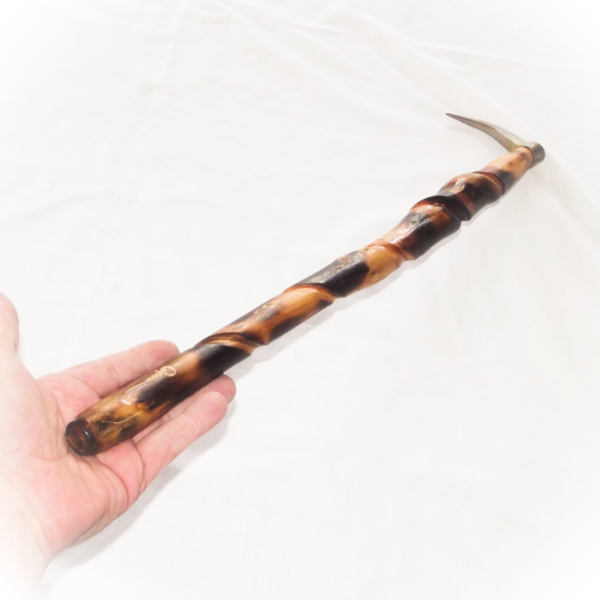 The Takhor Chang are formed by Mother Nature, with the spiral force of creation within them.

As a caller of wealth, it is in its primary position of use, and the Takhor Chang can be used by waving the Takhor Chang with a raking movement, coming from the entrance of your store, towards the cash till. 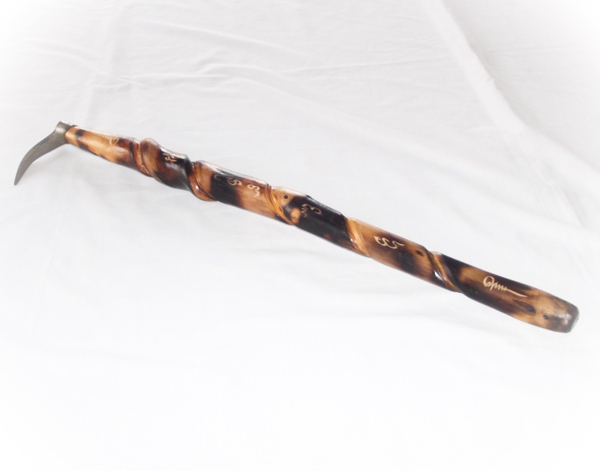 This Item is not only for using to goad and horde customers into your shop, or to call admirers and friends, money and gifts in, but is in fact a general purpose piece of Magical Weaponry that has a whole armory of spells that can be performed with it. 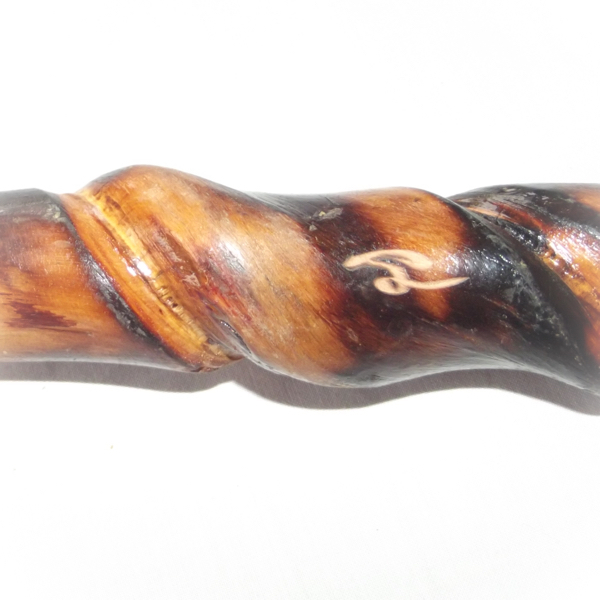 Those who worship devas who carry a Goad, or Elephantine Deities (e.g. Ganesha, Kali) or even Deities who ride on Elephants (e.g. Indra, riding on Erawhan 33,333 headed elephant). 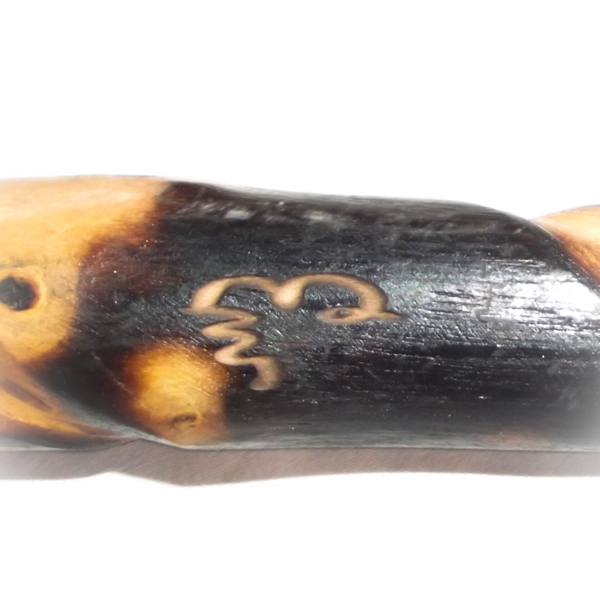 The goad can be used as a wand with a special hook for reeling in money attraction and customer attraction, or just admirers, depending on your personal intent. The hook is known to catch, but not let go, and is thus Maha Lap Maha Pokasap, preventing the wealth that is caught to be stolen or trickle out again through the back door. 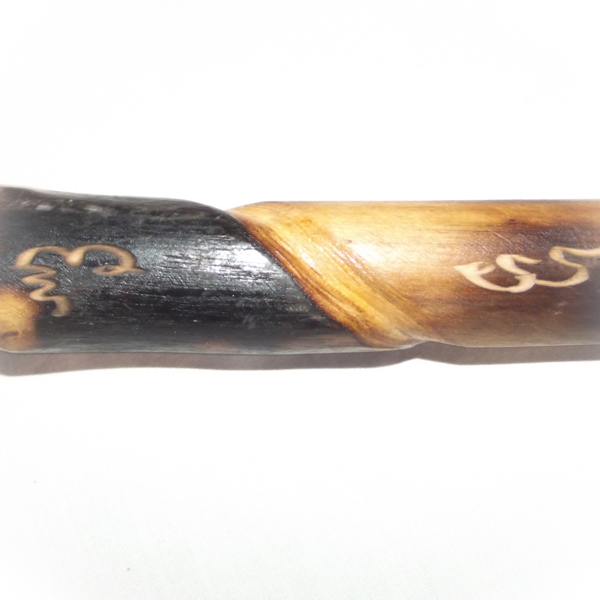 Maha Amnaj is Commanding Power and Influence of the Goad. It commands even the mighty elephant, who is along with the Tiger and Big Cats, the symbol of Maha Amnaj upon the earth, as is the whale its symbol, within the oceans wherein it dwells.

Luang Phu Hongs is a Master Gaeji Ajarn with masses of Devotees from around the World, and enjoys a welcome reception from local Devotees on both the Thai and Khmer sides of the border, where Cambodian believers laid down in the street to form a human road for him to walk on. He tried to back out of it but the devotees insisted. 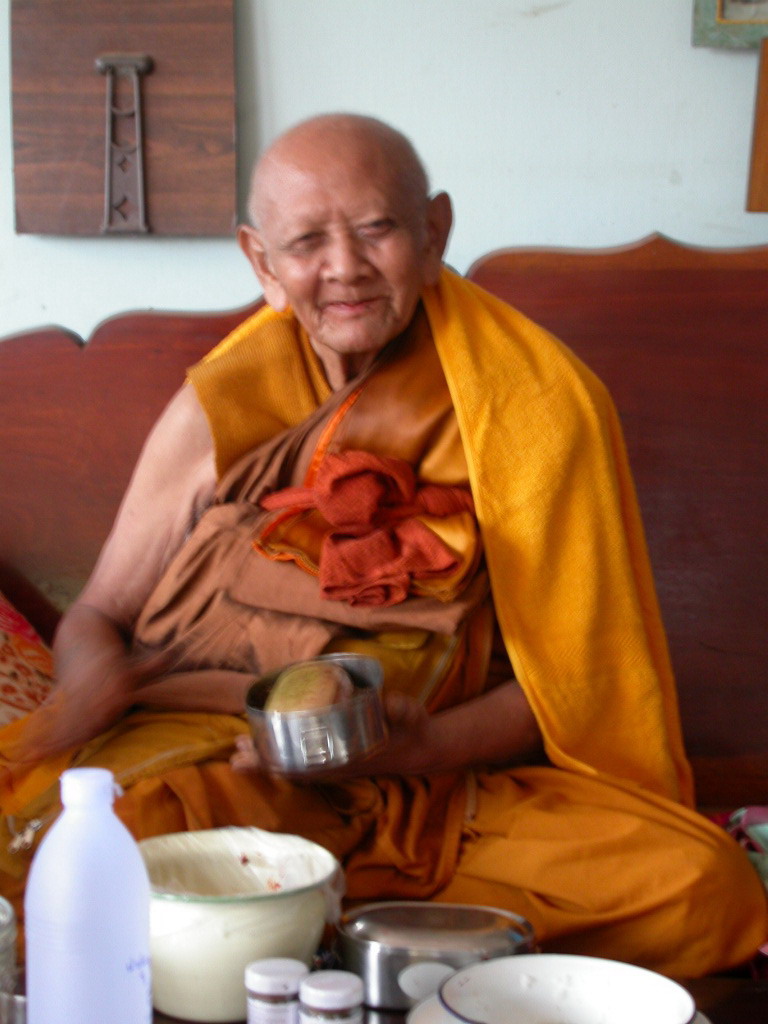 This was because of a miracle which occurred with their village being bombed as LP Hongs was meditating close by in the forest, and the bombs did not go off. LP Hongs has learned many Wicha over the decades on his Tudong travels through Thailand, Laos, Cambodia. News of his Merits and the powerful effects of his amulets has travelled to other Nations. Luang Phu Hongs has a very large following of Singaporean, Taiwan and Hong Kong devotees, as well as many Westerners. 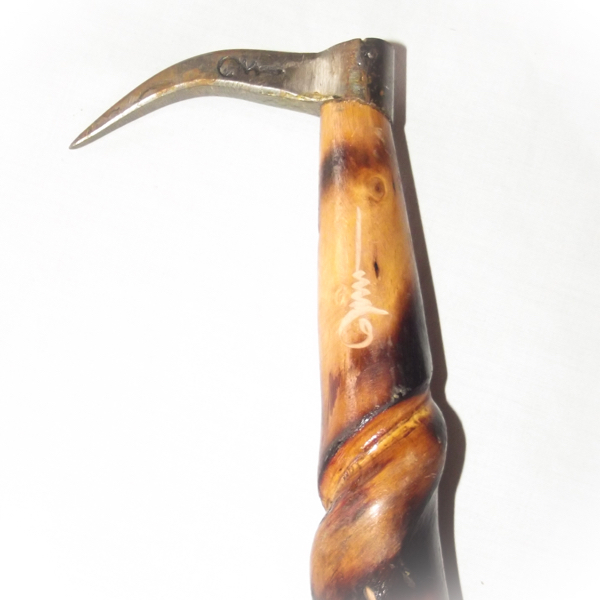 Amulets by Luang Phu Hongs are also known for their quality of craftsmanship and beauty, which is a deserved reputation, for i find his amulets to be indeed very beautiful (a presonal favourite of mine are his Pra Somdej amulets, which are made using a very ancient method indeed, and look as if they have been made in the ancient manner). 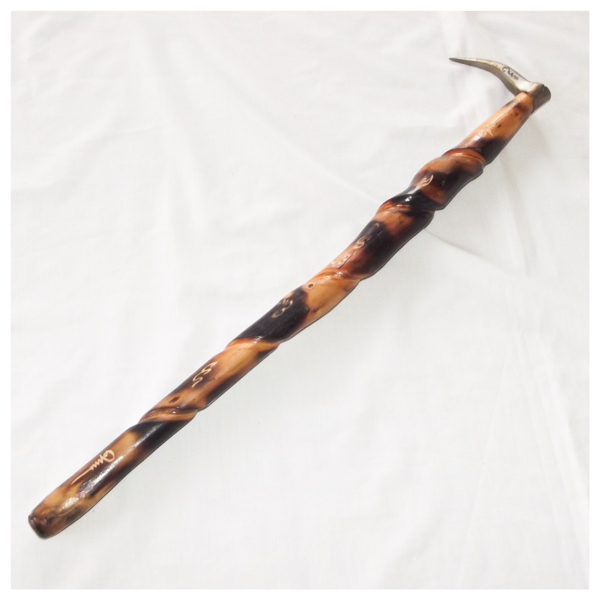 The Dtamnak Dtak Sila Khao Or Southern Academy of Sorcery, is perhaps the most famous and long standing lineage of Occult practice that is still alive and kicking to this day, and has a large array of truly adept masters under its list of members, past and present. 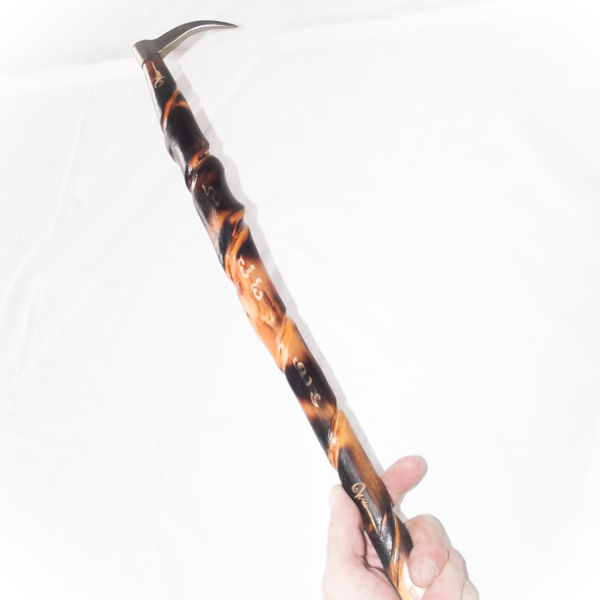 There is no lineage more famous respected or feared for its truly powerful sorcery, as the Dtamnak Dtak Sila Khao Or, whose fame dates back past living memory to the days of Luang Por Thuad of Wat Chang Hai Temple.