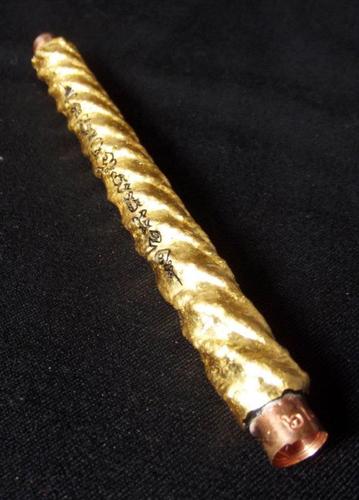 Once again we see a rare occasion where the extremely in demand but only rarely issued Takrut Jakkapat is available for Devotees of this Takrut to posses for Bucha. The last time we saw a Master Takrut of this Calibre with Wicha Jakkapat were from Luang Phu Phad and Luang Phu Ka Long, which are already long since all with owners, and now practically impossible to find one for rent. 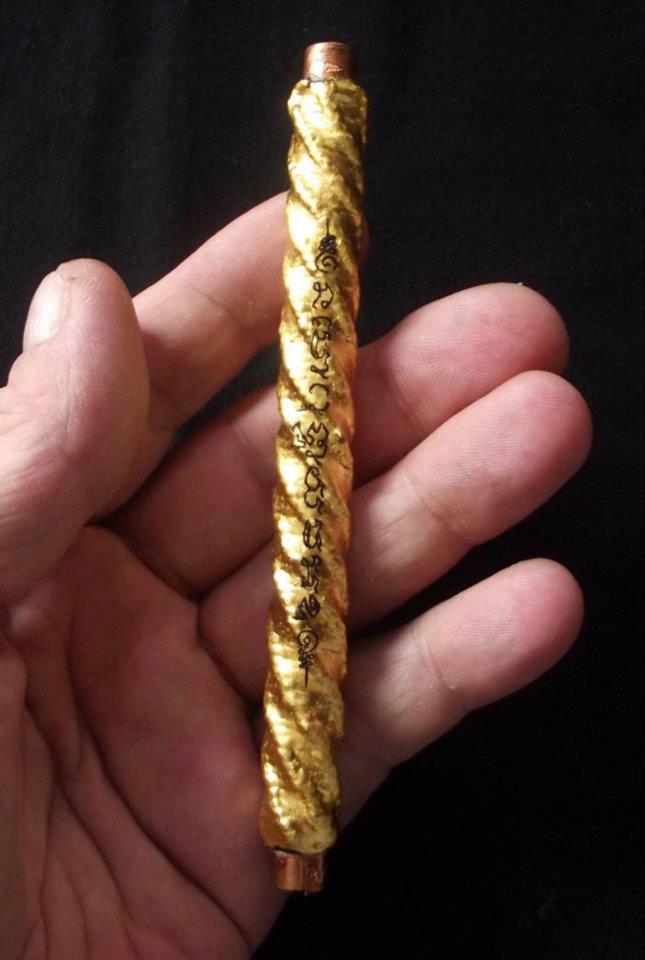 Empowered by Luang Phu Solos and issued after a Trimester of Empowerments in the 'Ayu Watana Mongkol 98' edition of amulets celebrating Luang Phu Solos' 98th Year, and his 75th year as a Bhikkhu. The creation process for these powerful Takrut began in 2554 BE, with 999 Takrut being made. They began one year before their issue, because it is a very complex task to inscribe the various Yantra and Khom Incantations upon the takrut scrolls that are rolled up into amulets. The Sacred Geometry used in the Takrut Jakkapat are extremely complex and long winded, taking an extremely long time and diligent laborous effort to achieve the final Yantra inscription without any errors. The Takrut are not made from block pressed Yantra, rather are hand made inscriptions on each Takrut foil, with Incantations performed during the whole inscription process according to the True methods of this Age Old Wicha of Warriors and Rulers of Kingdoms. 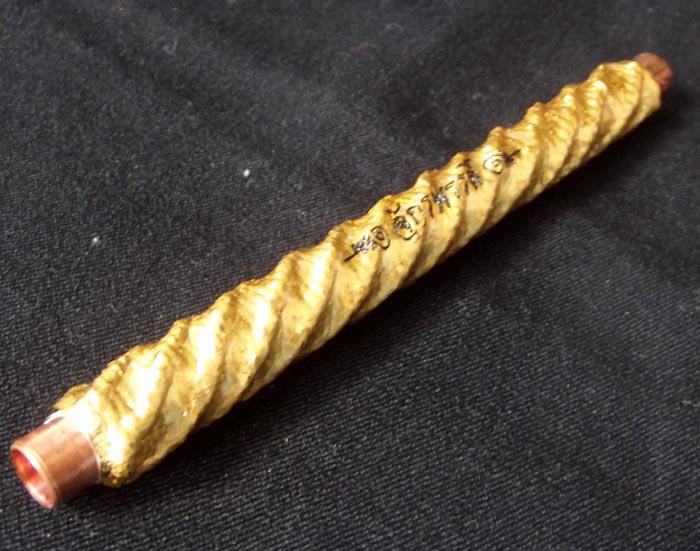 The Takrut are so incredibly well made and attractively finished as is fitting for a Takrut with the name 'Jakkapat' (Empire). It fulfills every expectation of the Devotee both in terms of Sacred Empowerment and Authenticity of its Magical preparation method, as well as in the visual aspect of the aesthetic beauty of the Takrut, with its cord binding, and gold leaf coating with elegant Khom Agkhgara inscriptions. 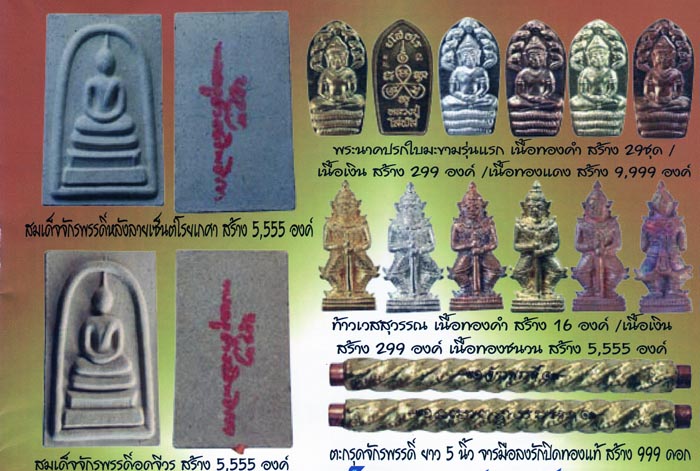 The Making of the Takrut began with a piece of 'Phaen Yant Tong Daeng' (copper Yantra Foil) 5 x 5 Inches in width. Each Foil was cut to the exact measurement then stamped with a metal code stamper until every foil was stamped in numbered series.

The Ceremony of Bucha to the Kroo Ba Ajarn of the Past was then performed before any inscription of the Ancient Khom Agkhara was made on the foils, for it is not easy to make high powered amulets with such a powerful Wicha as the Takrut Jakkapat.

The Yantra were then given their first Putta Pisek Empowerment with Mass Chanting on the 23rd of April 2554 BE, and were blessed along with the previously released 'Run Jaroen Sao Ha' edition of amulets that were receiving their final empowerment with this ceremony.

When this was over, the Yantra Foils were immersed in the prayer water vessel for a period of one month to charge up with the Prayers of the Bhikkhus in the Uposadha Shrine Room.

Then the Takrut Foils were taken and rolled up with the Invocation of the four elements performed as they were rolled and recieved Incantations the whole time. Only a few Takrut could be rolled in one day, so it took many days to complete the Task. The rolled foils were then bound with  enchanted cords. 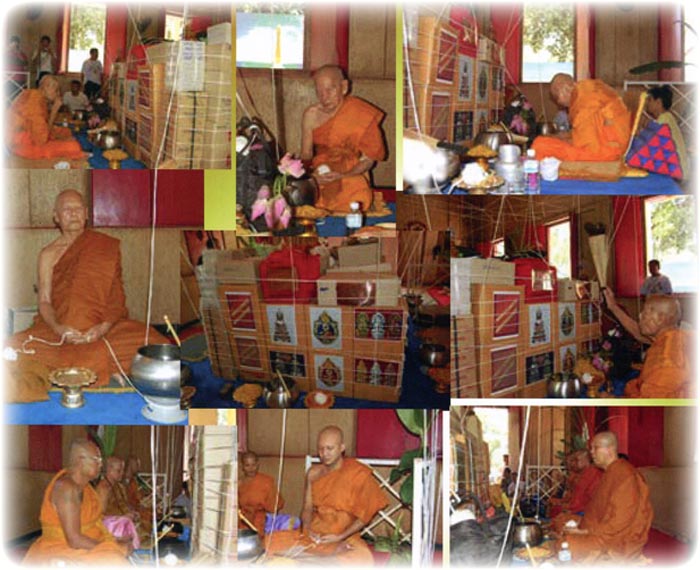 The Takrut then received a second empowerment and Blessing in the Putta Pisek at Wat Tham Tapian Tong (Wat Luang por Tong Dam) on the 21st August 2554 BE. Nine of Thailand's Top Master Guru Monks were present to assist in the empowerments on this occasion.

The third occasion, Luang Por Solos performed his Solo Empowerment of the amulets along with the 'Run Som Prartana' 'Run Jakkapat' edition of amulets which were in the process of receiving their final empowerment and ultimate release to the public. Then the cord wrapped Takrut were taken once more, and given a coating of protective black lacquer coating, and finally covered with pure gold leaf, and given further inscription of Buddist prayers on the outer surface. 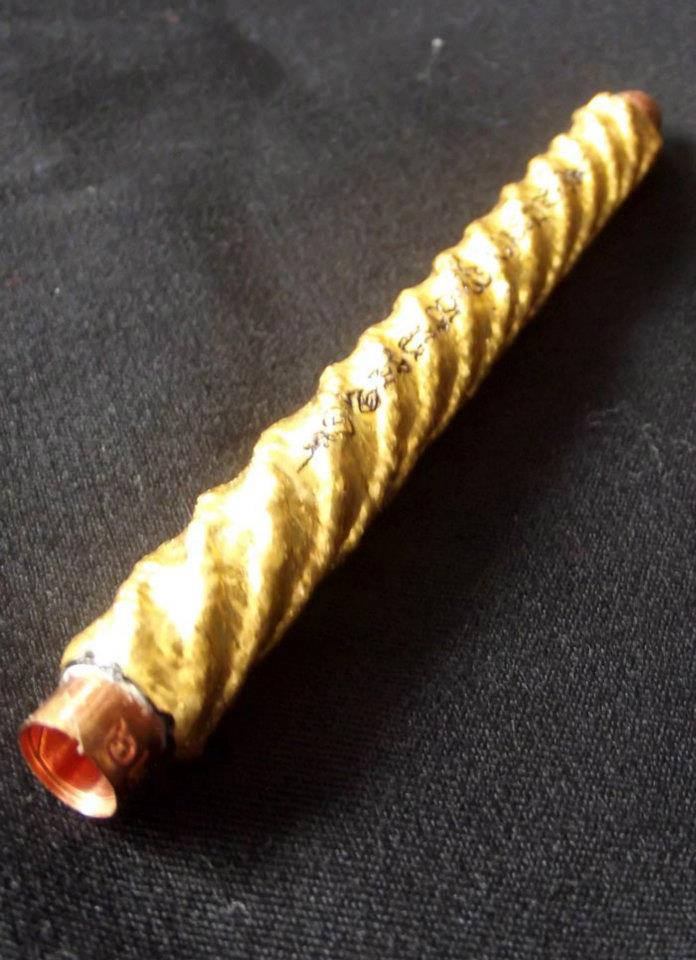 The Takrut Jakkapat uses the Ancient Wicha of Wat Pradoo Rong Tam using the power of the Yant  Pra Puttakun 56, pra Tammakun 38 and Pra Sangkakun 14, which add together to make the Sacred Buddhist number 108. The Takrut Possesses the following properties;

The Yant used was used by Ancient Masters, who gathered forces to make a Yant inscribed upon a large stone , which was then immersed in a lake, so that students of the Tripitaka who drank the waters of the lake would develop better intelligence and a clearer memory of their studies.

The Takrut can be used to immerse in the holy water bowl, and the water can be used to drink a little, spray on your forehead, for good health, long life, and increase your success and prestige in the social and profesional areas of life.

For increased 'Dtaba Decha' (Recieve Honors, Glory, Respect and Promotion, and more dominion and influence), the Takrut can be worn on a waist cord as a 'Takrut Ruud' (waist slider). Wear it on the front to increase the power to Impress others with your Glory - those you approach wil be intimidated and scared to offend, and want to please you.

Gamblers can take the Takrut in the same way and slide it around the waist cord to face the back, and tel the Takrut how much you wish to win. Aim for and be satisfied with the specified amount. Do not bee too greedy each time, rather set yourself reasonable goals. If you find the right balance, you will experience a constant rise in your ration of winnings against losses, and thus a constant rise in your savings.

For increase Business Sales, use the Takrut for the Immersion Method to make Holy water, and spray the water on the wares you wish to sell.

Even if someone is Possessed by a Ghost, or there are Poltergeists or Hauntings, the Takrut wil make Holy Water powerful enough to cast them out.

The Takrut jakkapat is also able to heal illnesses, by spraying Holy Water from its Immersion, and is good to spray on your head if you are in defence of a Court Hearing.

The multi purpose ability of the Takrut Jakkapat as well as its Regal Origins, are part of the reason why this Takrut and this Wicha is always so heavily sought after by devotees, and due to the rarity of occasions where this Takrut is issued, the Takrut can be considered to be an eternal rarity which is always sadly more in demand than available. We try to keep them stocked but even we end up losing the battle due to the massive imbalance of availability against demand. 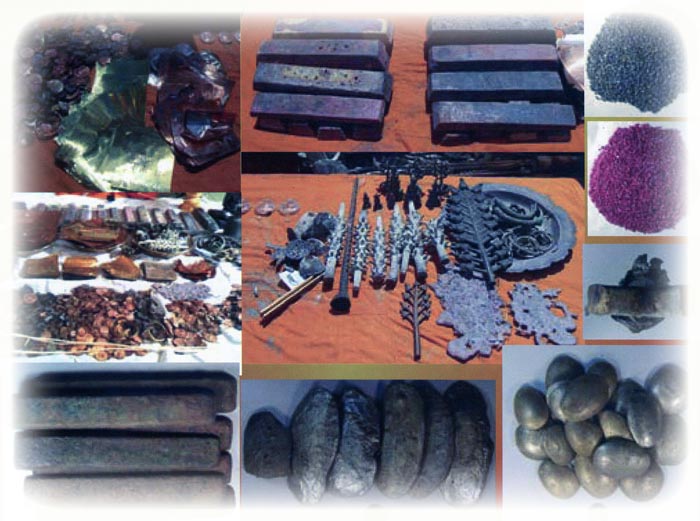 To protect against Black Magic and Sorcery, take some sand and some Holy Water from the Takrut, and pour them on the doorstep. It will banish any evil ghosts and if any spirits or ill wishers step on it, they will encounter their own downfall, and be unable to hurt those who dwell within that household.

No Special Kata is needed or Given, except that you should pray to and think of Luang Phu Solos and ask him to help fulfill your wishes. You can however use the Standard Buddhist method for asking Amulets for Blessings and granting Wishes

For Holy Water making you can chant many different prayers or Kata depending on which kind of magic you wish to evoke from the Takrut. its versatility permits so many options. We recommend the following for your experimantation in making Holy Water; 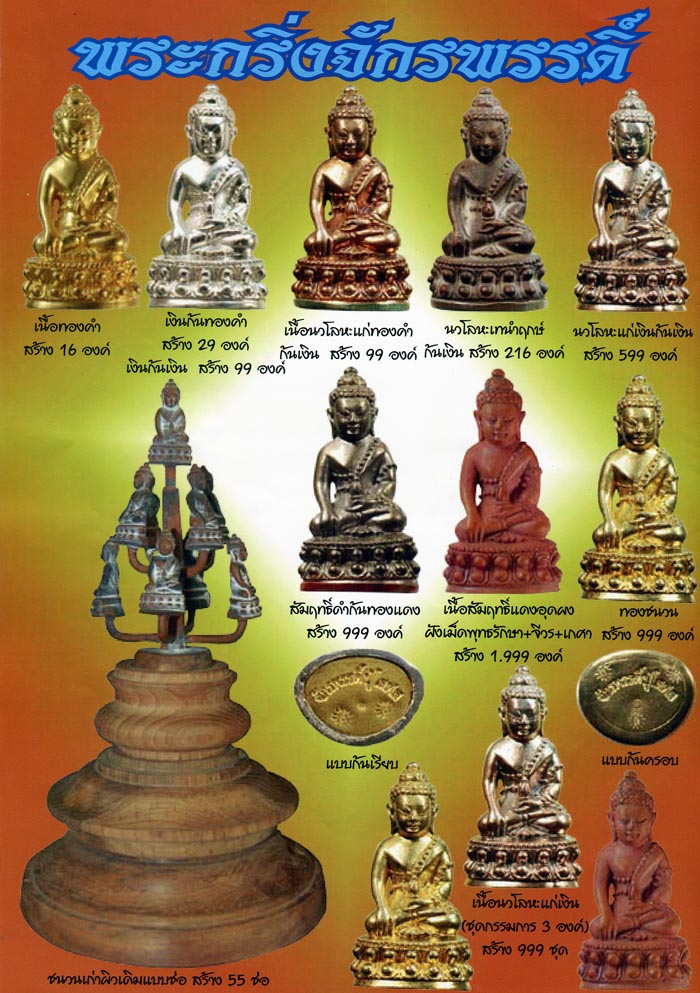 Released in the Song Nam 2555 BE edition of amulets along with the highly awaited 'Pra Kring Jakkapat 2555' amulets.

In this multiple Blessing Ceremony a large range of other amulets from the Song Nam were also released including some lockets and powder images of LP Solos with various sacred metal amulets inserted in the rear face. 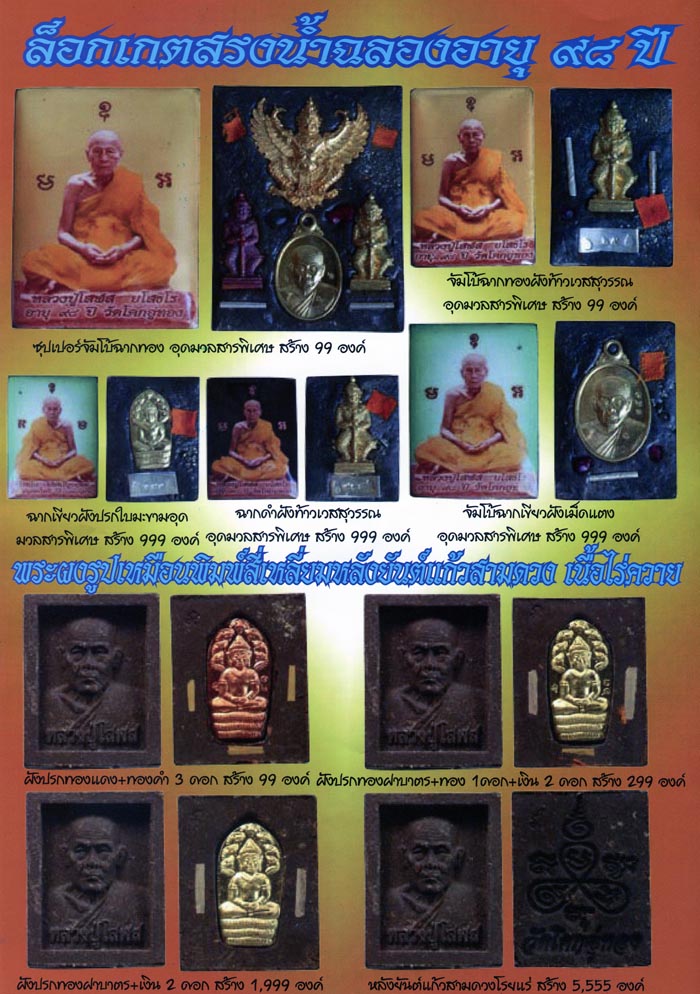