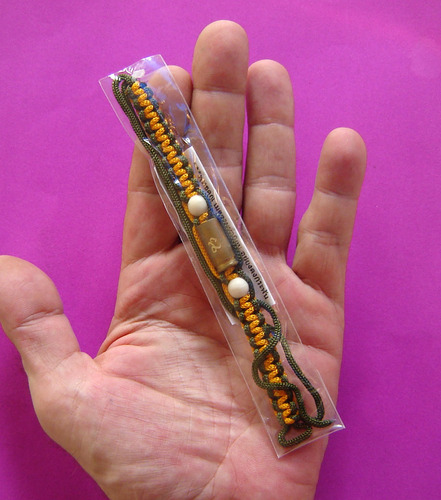 
Single Bullet Takrut with Kong Grapan, Klaew Klaad and Choke Lap magic woven into a cord bracelet to wear around the wrist. This Takrut belt is empowered with one 'Look Pern' (bullet shell), to protect agains all forms of physical danger, and even guns and bullets, knife and sword and other sharp instruments.

This edition of amulets was empowered in 2547 BE with a major Puttapisek to lend riches increase to the magical spells within the amulets, making this belt not only a powerful protector in all directions of the Universe, but also a magnetic wealth increaser, which will assist in attracting wealth through whatever possible channels your personal lifestyle or profession permits the amulet to help in.

If you are a merchant or salesman, your sales and customer count will increase with ease. Your back will be covered from all angles.

The Ruay Ngern Ruay Tong edition of amulets from Luang Phu Rit was made to raise funding for the building of the Sala Maha Guson at Wat Chonlapratan.

The Takrut were made in various styles (single Bullet Bracelet, nine or sixteen Bullet Takrut Belts) and several color combinations.This example is in blue and orange. Each Look Grasun shell has sacred Khom Agkhara spell inscriptions. If you must meet or encounter enemies or danger, chant the below Kata and think strongly pf the Triple Gem. Guns will not be able to fire, knives will not harm you. 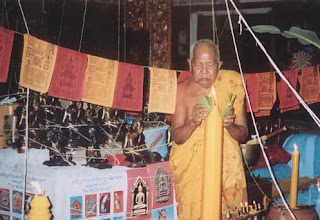 LP Rit is an Adept of Khmer Magical lineage who is an able magician in the Thai, Laoatian and Khmer Occult Arts. He has an intense radiant power of Metta Mahaniyom, which is revealed in the way he receives each visitor or Looksit with the same equanimity, regardless of status or generosity of donation, dress or manner. He talks with every person in the same manner, with kindness and honesty. He is a very humble monk, who still practices the old tradition of empowering single amulets in his own hand and blowing on them before giving to devotees who come to make merit. Sometimes he may inscribe a yant and give it to the visitor too.