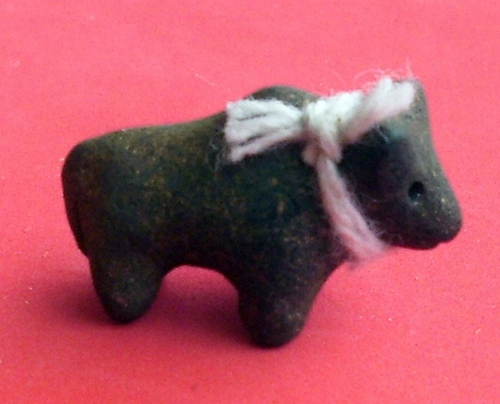 The Wua Tanu Tong is a very famous amulet from Kroo ba Gaew. So famous in fact, that he never makes enough of them to go round each time. Each edition is always snapped up almost immediately y his many Looksit. He learned the Wicha of making Wua Tanu from his Kroo ba Ajarn and used to make them as he wandered through the deep jungle on Tudong, to protect himself froom all the wild spirits and halflings running amok in the forest. The power of the Wua Tanu became apparent to him from his experiences in the forest, and so he began to make them for his Looksit to carry with them for protection and fortune.

Luang Phu made the effigies by hand personally each one, by mixing magical earths and powders and then molding it into the shape of the wua tanu, and calling the mind of the Deity to inhabit the effigy. He then baked them to make them hard and durable.

He then began the incantation of the spells to animate and empower the Wua Tanu. He chanted and meditated until the Wua Tanu appeared as a Nimitta and began to stomp around the Kuti hut he was meditating in.

Kroo ba Gaews closest Looksit all know well that his Wua Tanu Talismans are not only good for preventing Black Magic and protecting from all evil powers, but that this Wua Tanu Tong is in fact also a little gold miner - it has immense Choke Lap power and ability to boost business sales, and can even be used as a wishmaker amulet, to ask for certain wishes to be fulfilled.