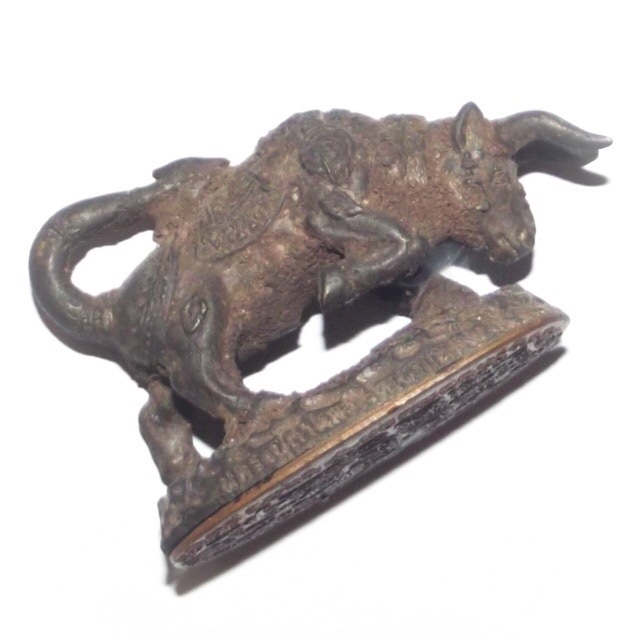 Wua Tanu Tong Kanong Rit Loi Ong statuette Miniature Bucha, by Luang Phu Ka Long of Wat Khao Laem. The Wua Tanu is one of the most accepted forms of Powerful Protection against both Thievery and House Invaders, and to attract great Wealth, as well as being equally famous for its power to protect against Black Magic and Dark Spirits. The Sacred Metal Chanuan Muan Sarn used for this editon of Wua Tanu utilised ancient war weapons smelted down into the Chanuan.

Each of these Wua Tanu Tong have the correct formula including Krang Putsa stuffed inside the effigy, and a Sacred Yant to seal the base with, which is engraved with a numbered code for the limited edition. The Wua Tanu is covered in a sprinkling of sacred earths from holy places in Thailand (Te Din Thai means to pour Thai earth on the amulet). Presided over and Empowered in 2550 BE Wai Kroo, by the Great Guru master Luang Phu Ka Long (Deceased). 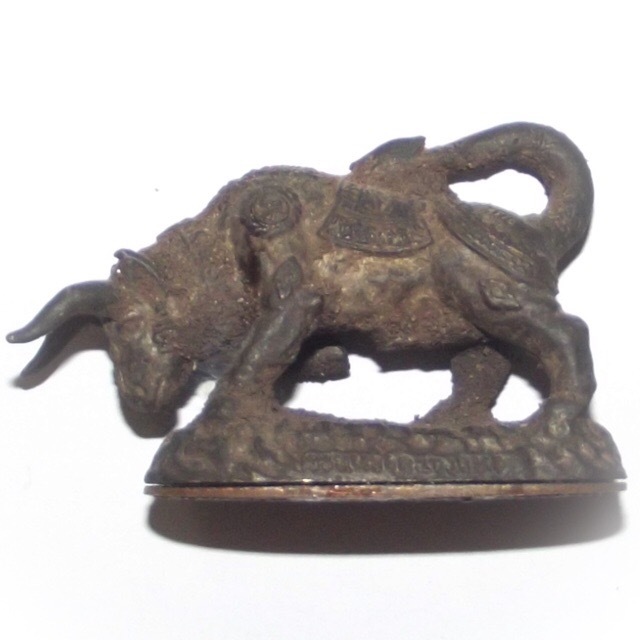 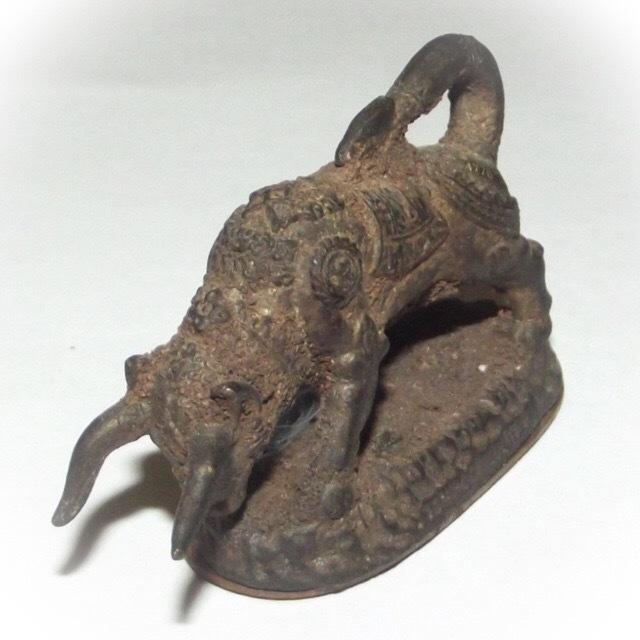 The Wua Tanu will evade all Black Magic as well as increase Baramee and Riches, increase Business and selling power. It will delete any effects of Black Magic which are being made on he or she who makes Bucha to the Wua Tanu Tong Kanong Rit. 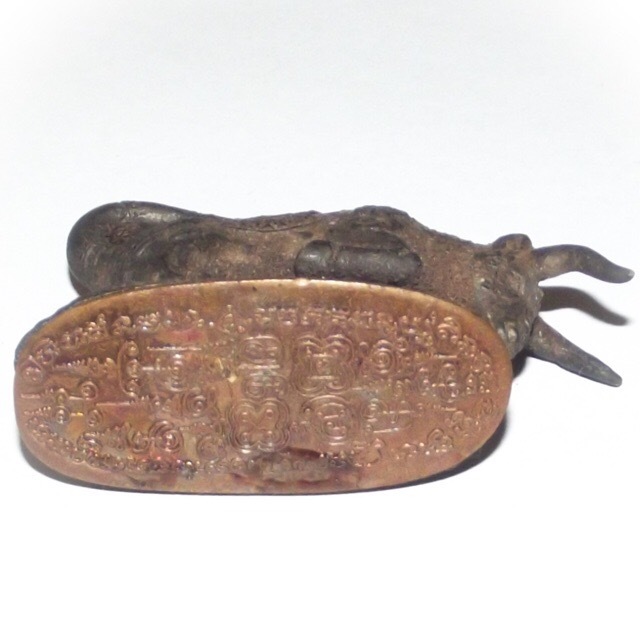 A Sacred Yantra on a Metallic Plate base is heat-smelted onto the base of the Wua Tanu, with a Mass of Sacred Yant and Khom Agkhara spells.

Can be used as a Bucha statuette on the altar, or can be carried on ones person.

Enemies who attach will endu up suffering the same thing they tried to commit against you, as the Wua tanu sends all curses and evils back to their origin, to attack their own maker. This also then stops any bad luck that may have been blocking the Lucky Influences from entering by removing any Black magic or other Obstacles, and calling in Wealth and Lucky Events.
The Wua Tanu is in Thailand an essential Magical assistant for houses that are on the edge of forests or jungles, on a T Junction or a Fork in the road, or where the Local Spirits are very powerful and not always Benevolent, and easily Angered. If you have a household in one of these situations then the Wua tanu is an especially recommended Protective Spell to eliminate Inauspicious Influences. 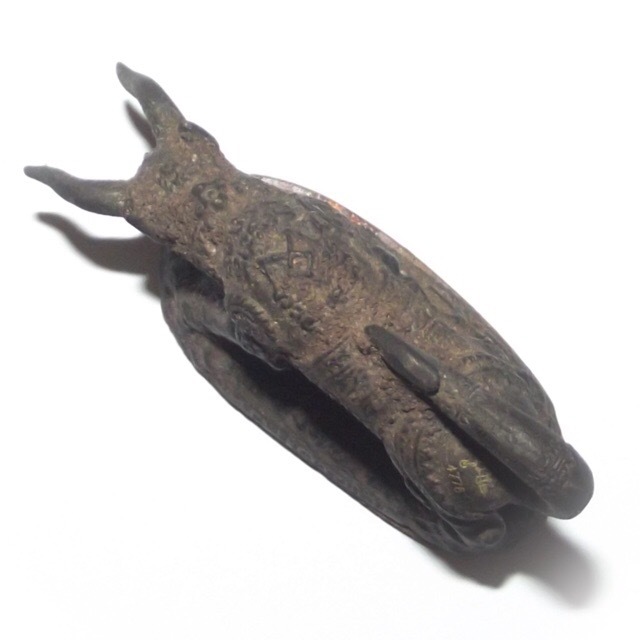 Anybody who needs to protect their valuables, or to defend themselves agains Black magic, will do well with the Wua Tanu Tong, who will foil the attempts of ill wishers, ghosts and robbers. 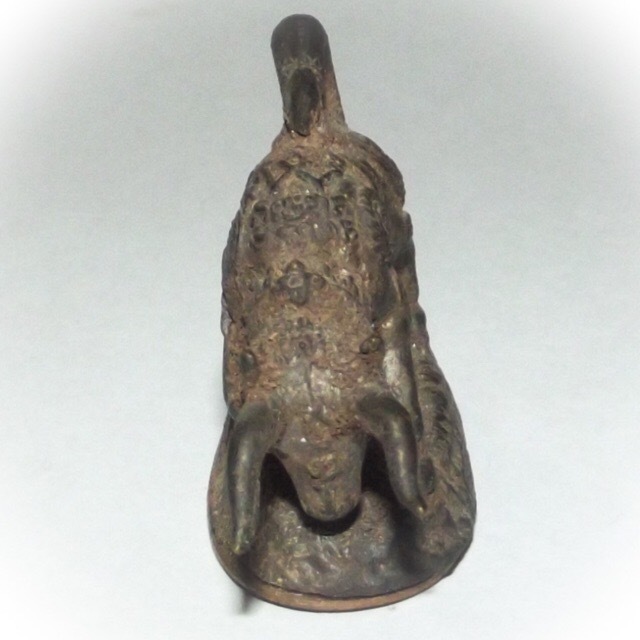 This now very rare amulet, from the Deceased Master Monk with the crystal tooth in the roof of his mouth, has now become an essential rarity immensely sought after by Devotees and speculative collectors alike, and is in every case an internationally accepted 'Niyom' Preferred Amulet, and a great classic of amulet making history. LP Ka Long became extremely famous when news got out of his crystalline tooth (Khiaw Gaew) in the roof of his mouth, just as Hanuman has in the Ramakian Epic. 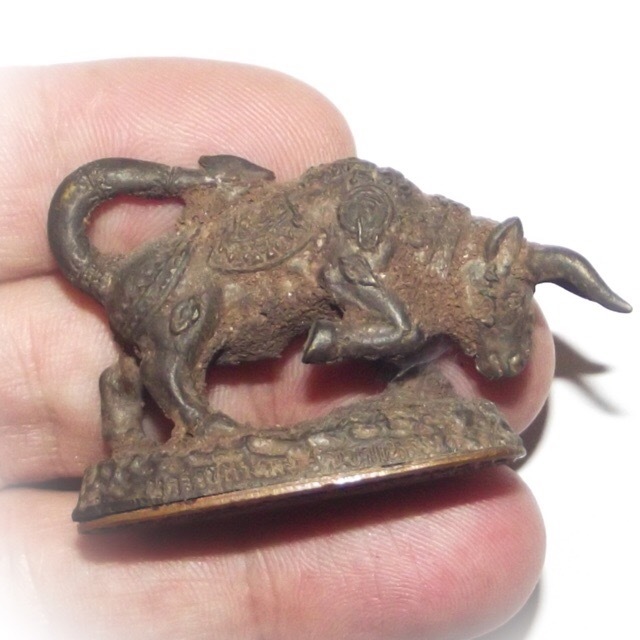 How to worship Wua Tanu and Kwai Tanu

Place the Wua Tanu on a Pan (Prayer Tray) or small Altar. Offer Water to dring (do not let it ever go dry). On Holy Days and Buddhist Festivals offer dry grass or hay.

How to Chant Namo Tassa

Abstract interpretation; “Homage to him the worthy one the one without any defilements the fully self enlightened”


Then Chant the Hnun Taat See (Invocation of the four elements)

Then Chant the Kata Wua Tanu 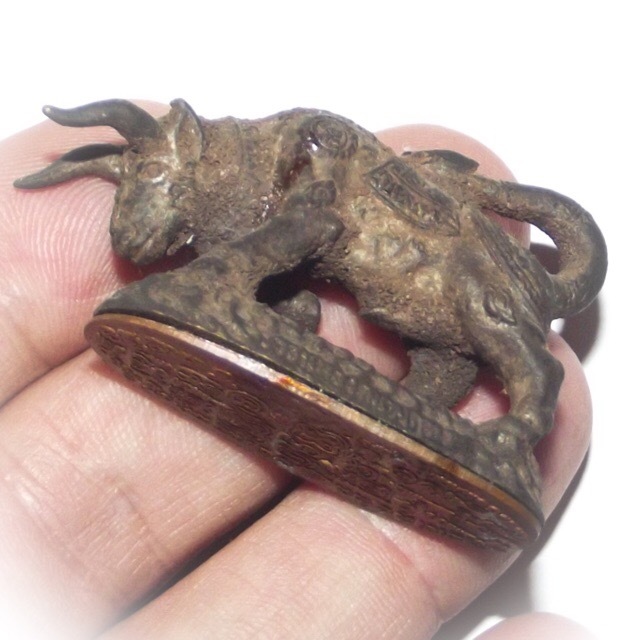 Then take the Wua Tanu and place them in the Khan Nam Montr (prayer water bowl). Then focus your mind into meditation, and think of the Buddha Dhamma and Sangha, the Deities and Kroo Ba Ajarn, and Ajarn Somrach, and empower the prayer water by chanting the Kata into it and projecting your thoughts into the water as you blow three times into the bowl.
You can use Wua Tanu to watch over your house,or mark a safe area around the house, or any place where there is strong Magic. To do this, you need four Wua Tanu, and a bowl of pure water in a Khan Nam Montr vessel.
Take the four Wua Tanu, and bury them in the Earth in the four Cardinal directions. If it is a house, that has no earth to be able to dig, then the Wua Tanu should be placed in the four outer corners of the house,and the prayer water should be sprinkled around the area to be protected.
If you have a Kuman Tong or other forms of Phuudt or Prai which you make Bucha offerings to in the house, then you must tell the Wua Tanu by stating who is allowed to enter and leave the protected area and who not. It is a good idea to also state that any ghosts or beings that are benevolent and will bring help or auspicious blessings should be allowed to enter.
Using to make Holy Water (Nam Montr)
If you want to make Nam Montr to remove the power of Black Magic from a person place or object, or to banish demons and spirits, or exorcise a person who is possessed, then you must make the Nam Montr in the same way as previously explained. But this time you need to use only one Wua Tanu. Then hold the Wua Tanu in your hands and enter Samadhi meditation, focusing as strongly as possible on the Merits of the Buddha.
Chant Na Mo Dtassa Pakawadto Arahadto Sammaa Samputtassa, 3 times, and ask for the Power and grace of the Triple Gem the Angels and Deities and Brahmas, Kroo Ba Ajarn (your teachers), and the power of the Mythic Wua Tanu, to make the prayer water powerful, and endowed with the ability to remove all forms of black magic and evil influence. You can specify particular purposes if you wish to be more detailed in the function of the Nam Montr.
Once you have chanted the Kata of empowerment, you should breathe deeply inwards and blow three times on the Wua Tanu, and lower it into the Khan Nam Montr until it is submerged under the surface of the prayer water.
Then you can use the water for drinking, cleaning yourself and the like to remove any Black Magic spells or unlucky influences. You can wear or carry the Wua Tanu with you, or put it in your vehicle as a protection from accidents of all kinds. If there are ever any visitations or experiences with contacting dark entities, all you need to do is dedicate some of the fruits of your merits to them, and think of Wua Tanu, and they will disappear. 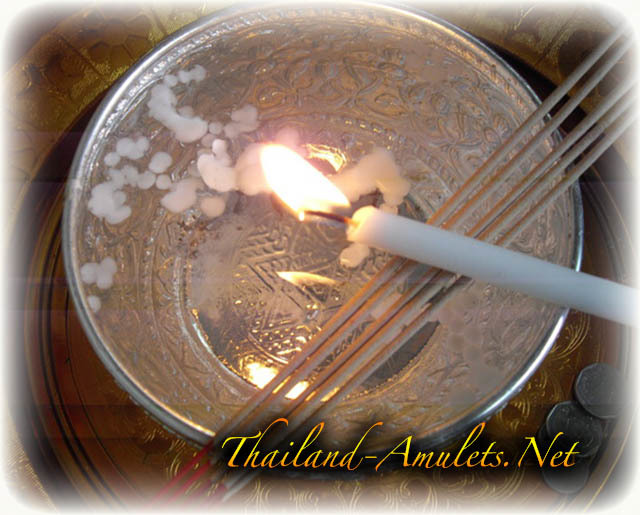 If you like to play lottery and seek winning numbers, when making prayer water, you can balance lit candles horizontally stuck on the rim of the prayer water bowl (Khan nam Montr), and light them, letting them burn and the wax droplets drip into the water bowl as you chant and meditate and pray. Once the ritual is over, you can then look at the wax droplets and the patterns they form on the surface of the water to find numbers, and use them fro lottery. 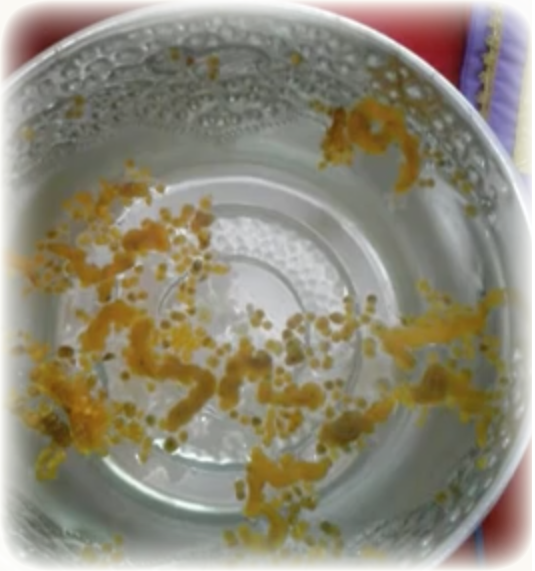