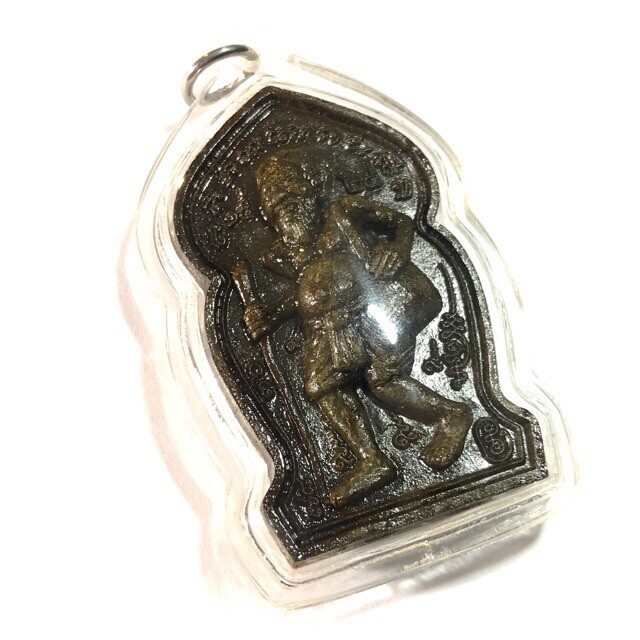 Choo Chok Khor Dai Jujaka Amulet for Wealth and Mercy Charm in Ongk Kroo version, in highly concentrated Nuea Din Aathan Pasom Pong Prai Dam Sorcerous Earths and Powders, with 3 Takrut spells inserted in the rear face, and a Yant Maha Sethee millionaire Yantra spell, from Luang Por Goy, of Wat Khao Din Dtai, in Buriram. This is the top range 'Gamagarn' issue of a two amulet edition of Choo Chok, Kumarn Tong, and Ruesi amulets, This series was a very highly regarded, and well remembered edition, & perhaps the most successful and memorable of Luang Por Goy's Trajectory, This edition was released as Luang Por Goy first began to gain the greater attention of the International Amulet community, around 2550 - 2552 BE, and is no longer anywhere to be seen in amulet markets. This exhibit belongs to a small selection of amulets which we stashed during the year of their release, knowing that one day the amulets would be no longer available, in order to be able to produce a surprise exhibit, years after the depletion of the edition, for that special person who has been wishing they had one, but never managed to find one. 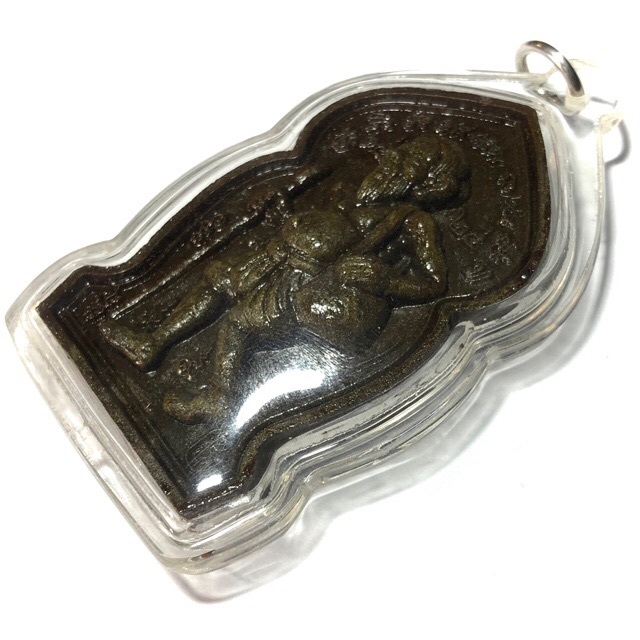 The now extremely rare, and renowned classic edition Choo Chok Khor Dai Ongk Kroo Masterpiece Version of Luang Por Goy's famous 2552 Heyday Era edition, which was the Era that brought him to International Fame with the power of Metta Maha Sanaeh Maha Lap that his amulets brought with them, and from the faith instilled in his devotees, because of his great humility and purity as a monk. LP Goy, made a Puttapisek/Tewaapisek ceremony and called all 108 Ruesi Deities to come and bless and empower the amulets. If you Bucha the amulet properly, you will find success in all your projects and attain wealth, Health and Happiness. Luang Por Goy said that the year he made these amulets was Year of black magic and the Agressive Tiger, and that he must make some special magical amulets to protect and improve luck and fortune (Serm Duang) to counter the negative energies of the current astrological alignments.

Choo Chok is one of Thailand's most powerful and revered amulets for riches and good fortune. Choo Chok was a beggar hermit who took Vessantarsa children as his own, and later became a Maha Sethee (millionaire). Waterproof Casing is included with this amulet. Vessantara was a previous Incarnation of who was later to be born as Siddhartha Gotama, and become the Buddha. Vessantara perfected the Paramee of generosity (giving) which is one of the ten perfections achieved which enabled the Buddha to conquer the Maras and become Enlightened.

Choo Chok of course, represents the Luckiest beggar, with the power to charm anyone into handing over their money or possessions. Thus, the sacred wiid and the Choo Chok magic combine to make a very powerful spell for receiving gifts and large sums of money, and for having your way and never being refused your requests. 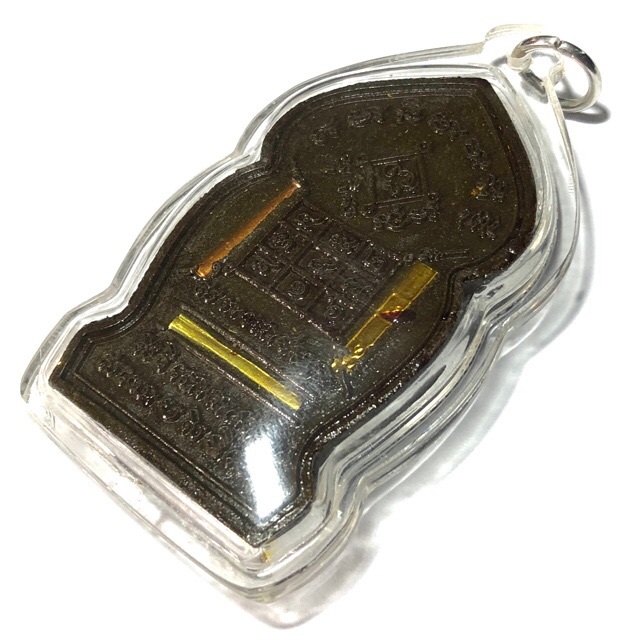 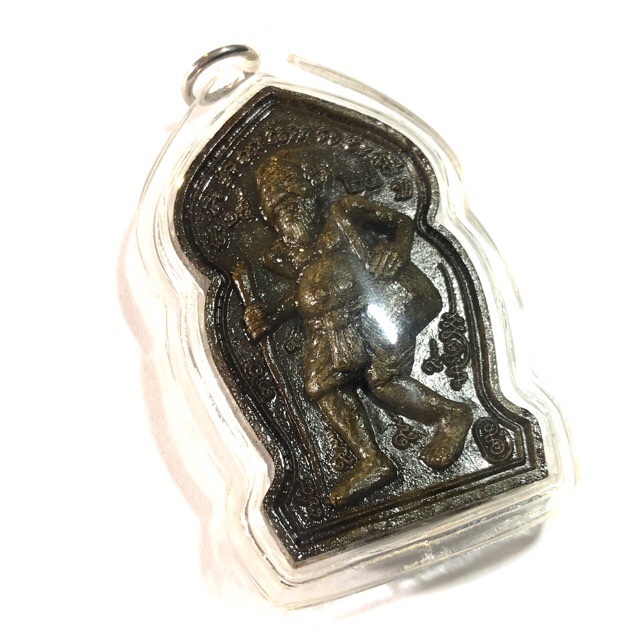 Issued in 2552 BE, this amulet is now very much a Rarity of the pantheon of amulets of Luang Por Goy.

The front face of the amulet depicts the wandering beggar Choo Chok, with his begging sack full of treasures. Choo Chok magic has the ability to always get whatever one ask or wishes for, with incredible luck. Choo Chok was the wiliest beggar the world has ever seen with such a way of getting whatever he asked for, that nothing would ever be refused to him. Choo Chok is a wealth attractor for both Businessmen, Merchants and especially good for travelling salesmen. this is Due to Choo Chok appearing in the Jatakas, in the last incarnation of the Buddha, before he was born as Siddhatta. 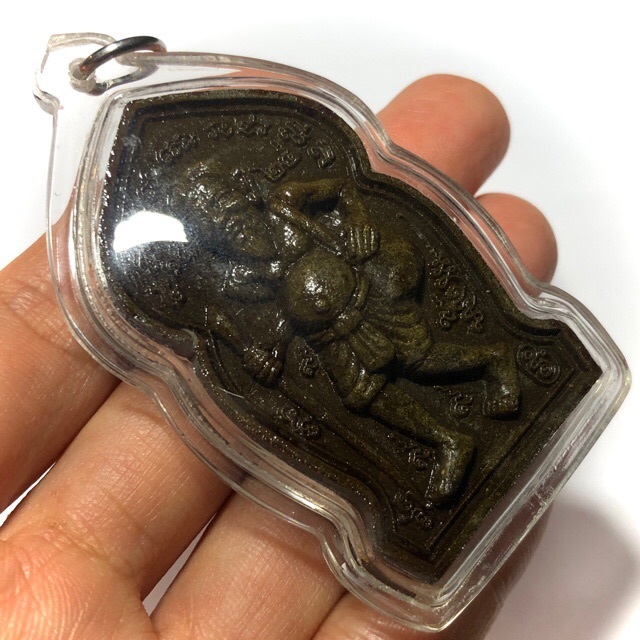 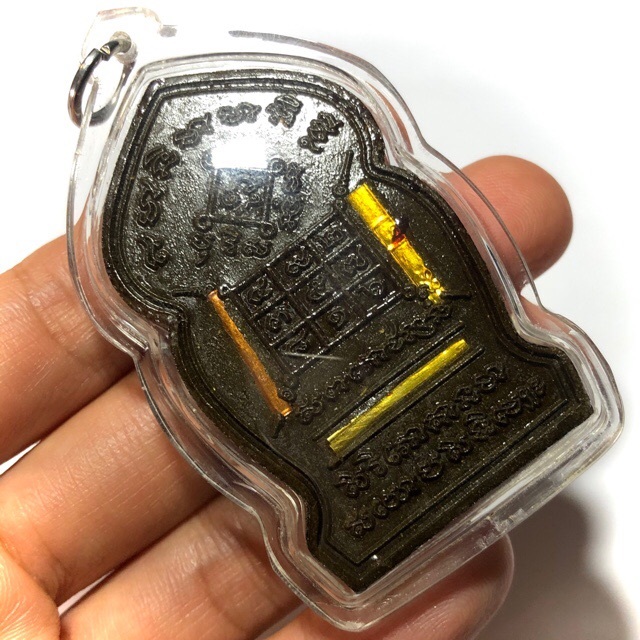 The fact that Choo Chok was able to even ask for somebody’s children and get them, shows the immense attraction and power of Metta Mahaniyom which the beggar Choo Chok possesses. This is the reason why the Choo Chok Deity is suh a powerful attractor of riches, because Choo Chok has a special Baramee that allows even the least likely gifts to be given with the greatest of ease. Sales are made so easily with Choo Chok to help. 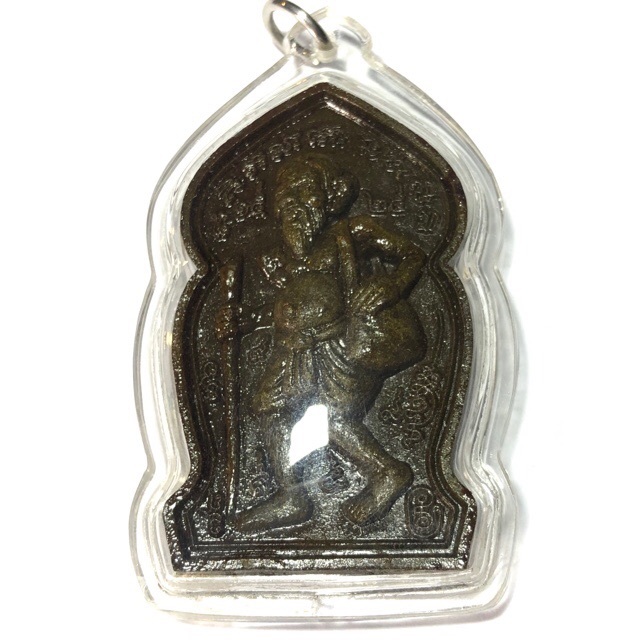 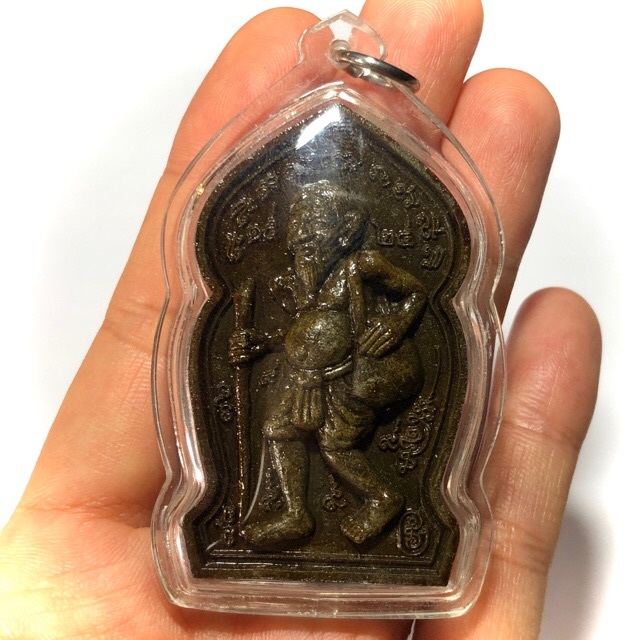 The Choo Chok has a dab of Krang Putsa paste pasted onto it, for increased Maha Sanaeh Attraction and to attract Customers and Induce Helpfulness in the Hearts of Others Luang Por Goy empowered the amulets according to the correct formula of Khmer Lineage of his Masters, and employed Kasina meditation until he saw a Nimitta of the Choo Chok rise up from the amulets, then he called the Citta Vinyana (spirit/mind) of Choo Chok, to approach the amulets, and to intertwine and fuse magically. 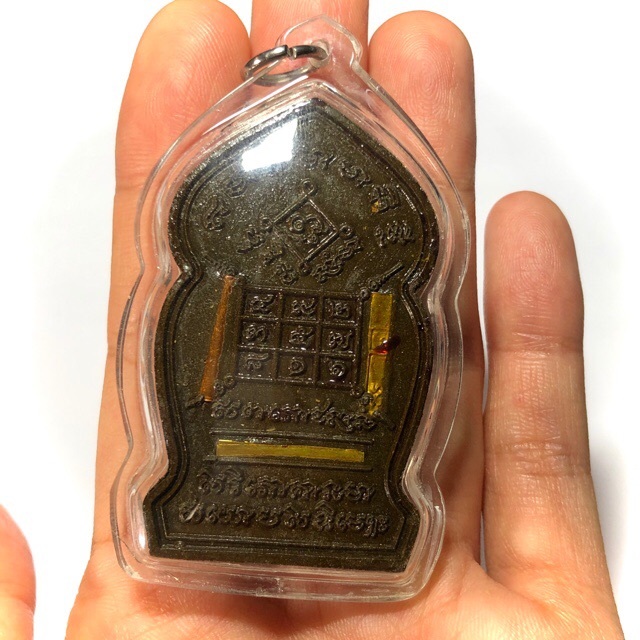 The rear face of the amulet has a Takrut Hua Jai Heart Mantra with te Invocation of Choo Chok, and a sacred Yantra with Astorligical Numerology for Maha Lap Lucky Fortune Induction (usefgul for Lottery Playing and Games of Chance, and Lucky Windfalls). 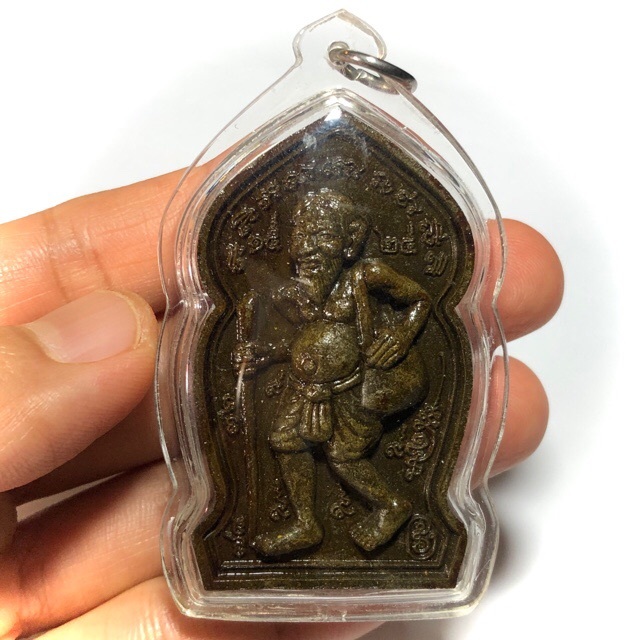 He then meditated to bind and empower the images with Ancient Khmer Sorcery, chanting Kata until the power began to arise within the amulets. He used many Mantras, Kata and spells, such as; Montr Ma Saep Nang, Montr In Koo Piswat, Montr Chang Pasom Khlong, Montr Khun Phaen, Montr Maha Sanaeh Piswat 108, Montr Maha Hlong Hlai (this Mantra can be used to hypnotize with - regardless of if it is a Man or a Woman), with Invocations of Maha Lap and Maha Pokasap Wealth Increasing Magic.

The invocation of Maha Lap and Maha Pokasap and with Choo Chok as its aid, make this amulet an excellent charm for gamblers in need of luck or anyone who wishes to come upon monetary fortunes as well as those who wish to more easily negotiate business deals. 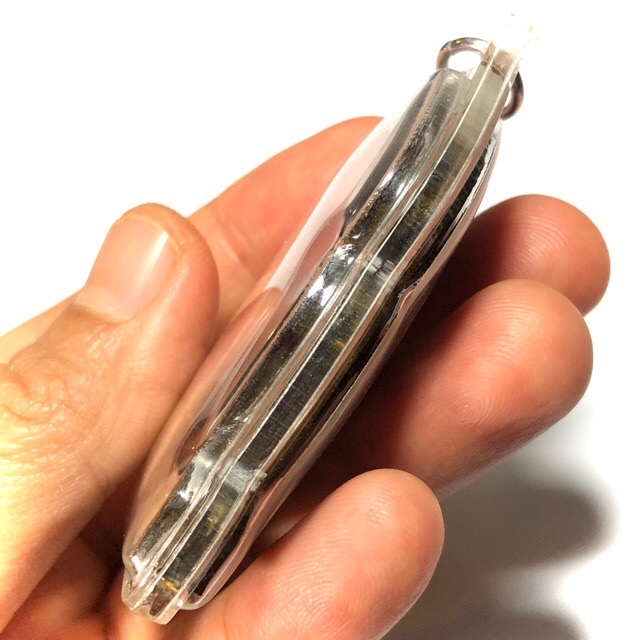 After this powerful invocation, Luang Por took the amulets and soaked them in Nam Man Paya Tae Krua Prai Oil, in order to multiply the strength of the spell contained within the amulets (magical charging). Blessed in Traimas 3 month Empowerment in his Kuti, along with varous other amulets in this now classic and most famous edition, which included some Lersi Dern Dong (Ruesi walking in the forest) amulets, Kumarn Tong, some Choo Chok Loi Ongk Statuettes, Ma Saep Nang Love Charms, and Pha Yant and Nam Man Prai Oil Potions.

Luang Por Goy was always known to be a very Humble and Simple living Master, and as an Adept at the Ancient Khmer Occult Arts. He was a very close friend of Luang Por Chern (Wat Ta Ee). As Luang Por Chern was still alive, Luang Por Goy would often help him to make and empower his amulets and assist in performing the Incantations. He is now known as one of the top living Masters of Khmer Necromantic Wicha, whose immensely famous 'Kumarn Gao Gote' amulets and Bucha statues have become one of the most successful editions in history, and was so popular that there were various repeat editions, due to so many devotees beseeching ever more. His final edition of Kumarn Tong Gao Gote was made around 2556 BE, and they are now considered to be approaching the rarity and value of the Kumarn Tong statues of the great Luang Por Te of Wat Sam Ngam 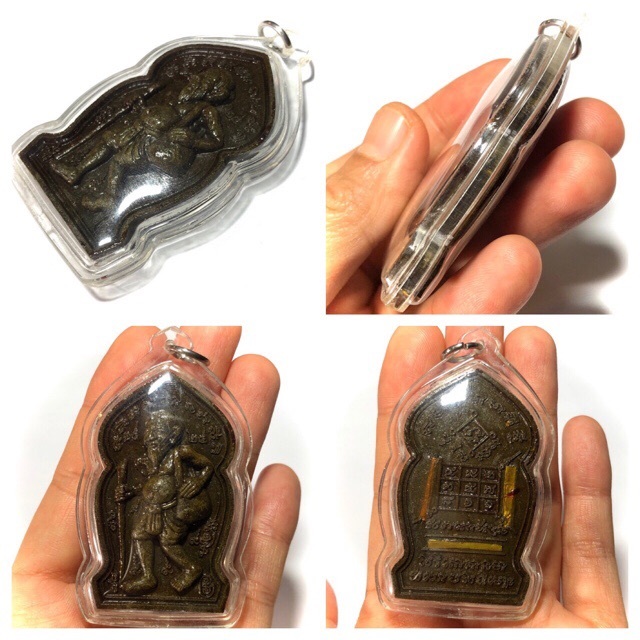