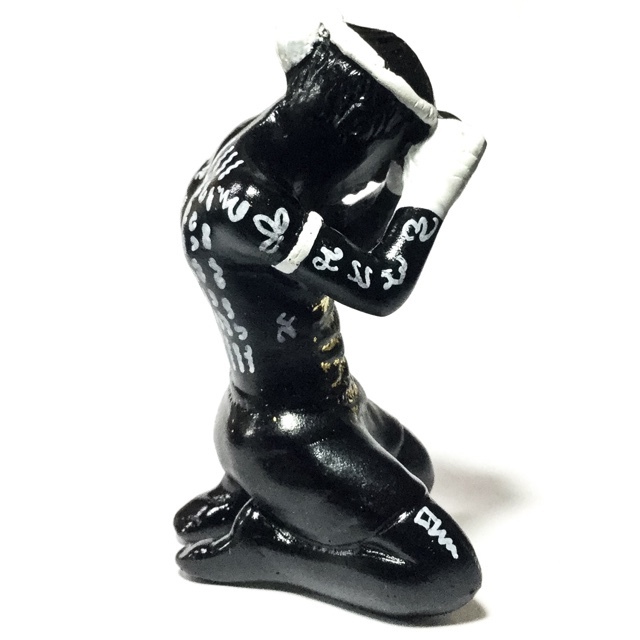 The effigy is sitting in Wai Kroo posture paying reverence to the lineage of his Masters before going into battle. The Hun Payont Muay Thai Warrior is covered with Sak Yant Tattoo Sacred Geometry Spell Inscriptions, from its creator, Ajarn Uten.

This Hun Payont Bucha statue is of course highly recommendable for Looskit of Sak Yant Thai Temple Tattoos and for Practitioners of Muay Thai, for use in Wai Kroo Bucha to the Lineage of Gurus, as well as to call as an invisible Magical Companion to assist you in gaining Victories and fulfilling your ambitions. 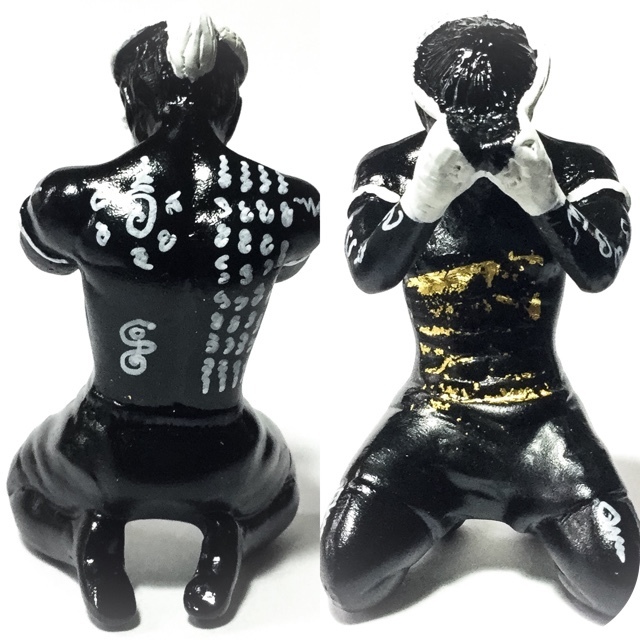 This edition is a very special never-before-seen limited series from Ajarn Uten, which has now become as famous as it is rare to find. it is understandable, due to the powerful effect which the Hun Payont emanates, as well as its Aesthetic Beauty, which cannot go unnoticed by any devotee of Muay Thai. 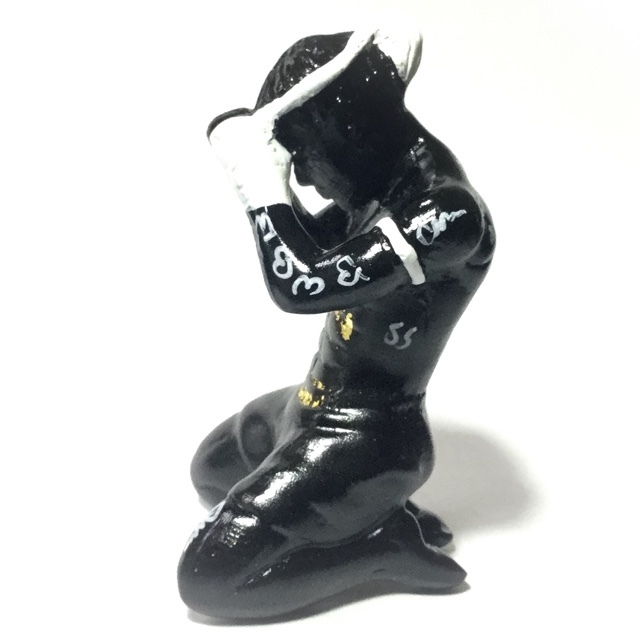 The statue has received empowerments over various months of meditative Kasina Staring, to invoke the life within the statues. The Invocation Summoning, Awakening and Turning of the Four Elements was performed to Reanimate Living Magic within the Static Form, according to the Ancient Grimoires and Magical Formulas of the Wicha. 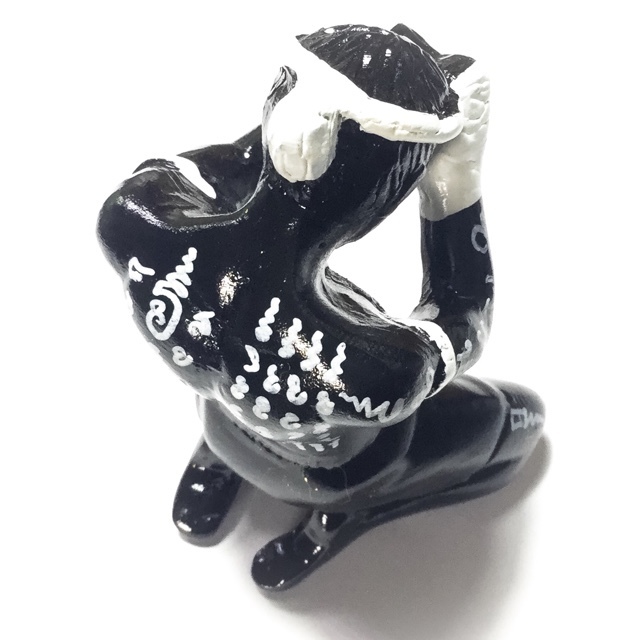 The full formula of Invocations for the Kata Akarn Sam Sip Sorng were performed for reanimation of the spirit within the effigy. This is an essential part of Necromantic Empowerment with all Humanoid and Animal form amulets which are imbued with a resident spirit. 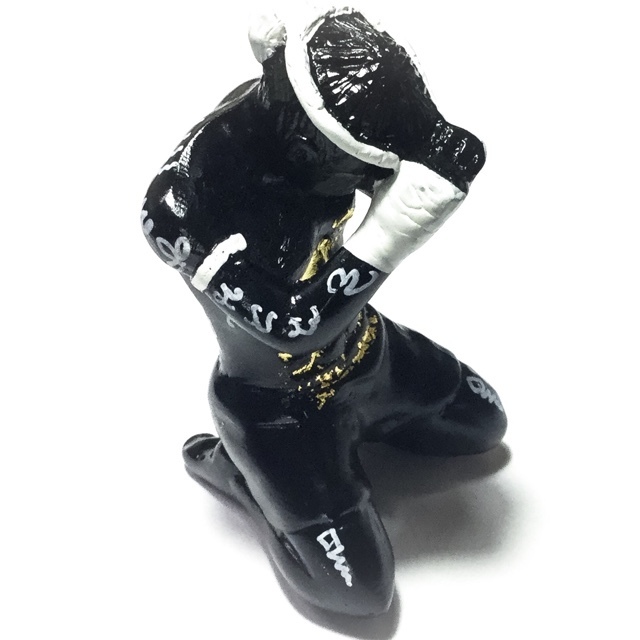 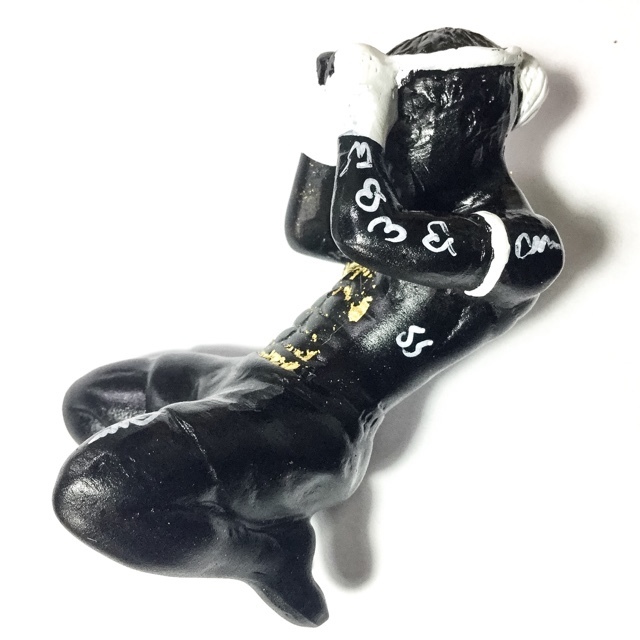 Each statue has recieved the hand made inscriptions of Sacred Yant, and Khom Agkhara, as Ajarn Uten empowered them during the final Blessing Ceremony, and have recieved a gold leaf pasted onto the chest of the Hun Payont Warrior. 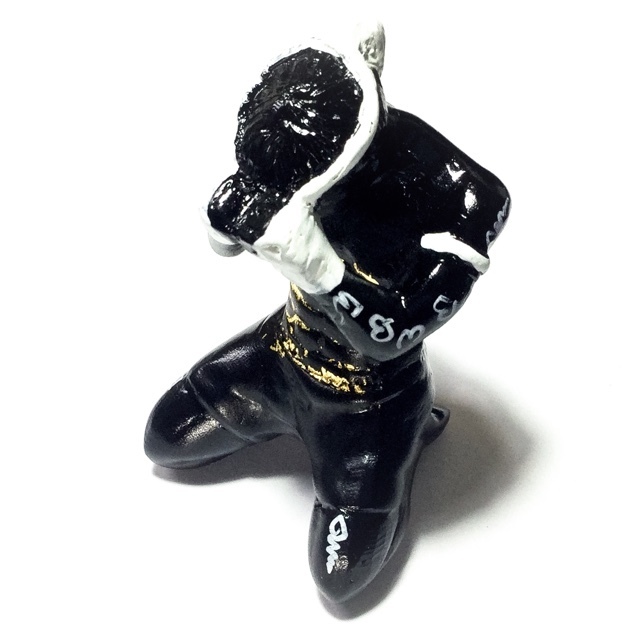 You can use the Jua Jai pra Apitam Kata (heart mantra of the Abhidhamma), to empower the Hun Payont Ta Ruay and charge him up with power;

The Ancient Wicha Hun Payont is intended for use as a personal ‘Fetch’. Fetch is an Occult Terminology, referring to a personal obedient assistant in the spirit world, which has a physical form to inhabit in Talismanic Form. The Thai Hun Payont, is quite comparable to a Golem, who watches over you and obeys your commands. 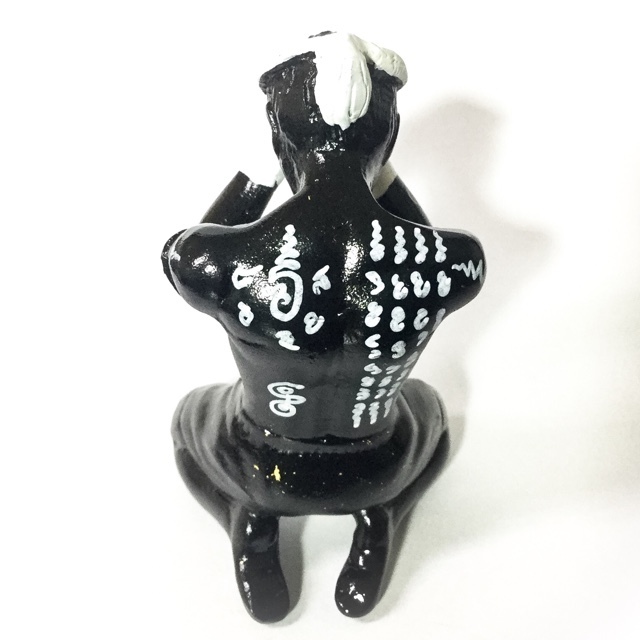 In Jewish folklore, a Golem (/ˈɡoʊləm/ goh-ləm; Hebrew: גולם‎) is an animated anthropomorphic being, magically created entirely from inanimate matter. The word was used to mean an amorphous, unformed material (usually out of stone, wood, rattan or clay) in Psalms and medieval writing. (Wikipedia).

In Siam, the Hun Payont was traditionally made using bound rattan, straw, or molded froom earthen clay, and even cast metal statues are found to be used, with different ‘Wicha’ (Sorcerous Methods of Empowerment), in order to perform successful reanimation of the Effigy. 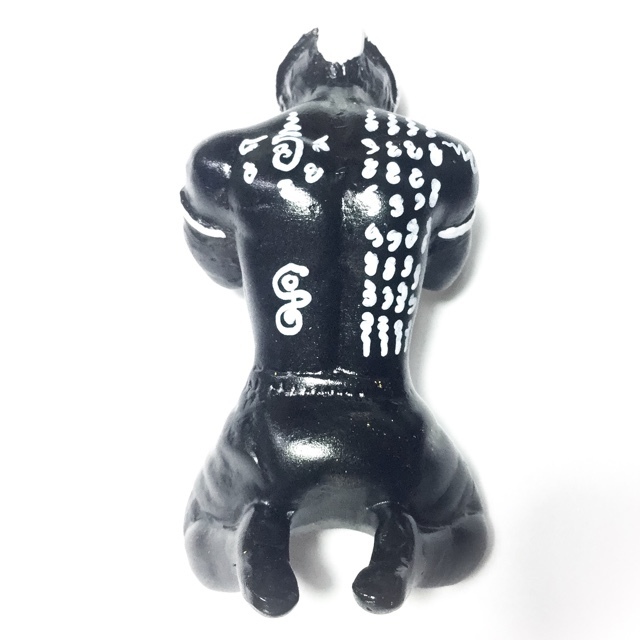 Before taking the Hun Payont into the house, you must light 16 Incense sticks and pray to the Jao Tee (local Devas and Spirit Guardians) and inform them that the Hun Payont is another welcome member of the Family.

For Bucha to Hun Payont - Light one stick of Incense, and chant the following Kata;

You can be flexible with what you offer, depending on what is convenient or what you feel your Deities will like to receive. Light incense sometimes, and chant the Kata often. Some people also offer Whiskey and Fresh boiled pork on Banana Leaf or Pandan leaf.

Kata for asking permission to use the Hun Payont to help complete a mission or other task. 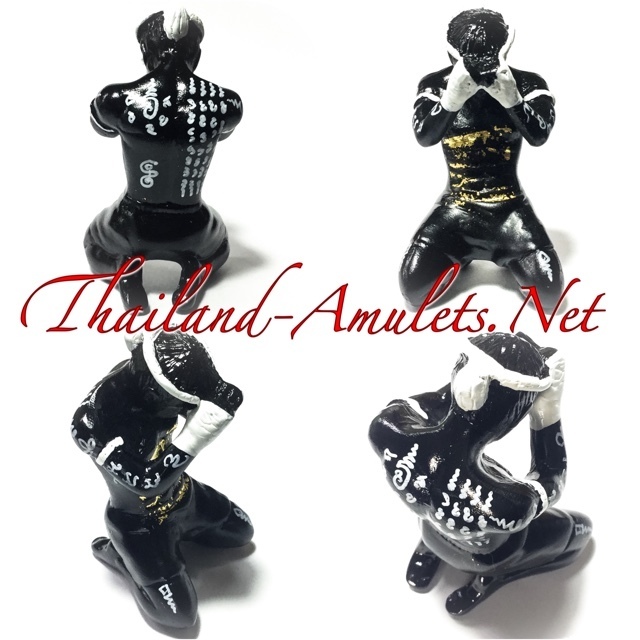