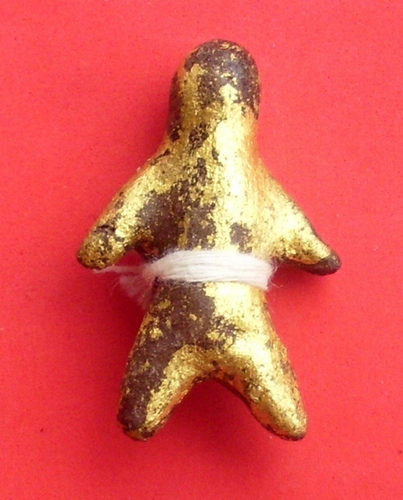 Luang Phu Sawad built and empowered the Hun Payont Effigy using the Wicha of the Ruesi. Many years ago, he mad a small number of only nine Hun Payont, and buried them iin the four corners of the temple one in each direction. So four were gone, and the remaining 5 Hun Payont were distributed to some close Looksit. After this, many Miraculous events occured; Many Looksit recounted the same tale, that they had seen someone walking around the temple as if they were guarding it, especially on Holy days. They said that they saw a dark shade wandering around the temple walls.

Luang Phu says that the Wicha of building or invoking life into a Hun Payont effigy, is a Wicha that he learned from a lineage that has passed oon the Wicha since the Ayuttaya Period. This Wicha is what Luang Phus Ruesi Kroo has passed on to him, which has a very ancient magical formula, and uses many powerful sorcerous ingredients in the making of the effigy. Only 99 of these Hun Payont were ever made

The Effigies were blessed animated and empowered in 2551 BE on the full Moon of a Monday evening of the 12th Lunar month.

This amulet is now a total rarity and is not to be found without spending serious time and investigation searching. Immense Power doesnt always have to go in large containers when it comes to Magical Power - this Hun Payont is only 3 Centimeters high and 2 Centimeters wide, but when it comes to true Magical Wicha, size doesn't matter.