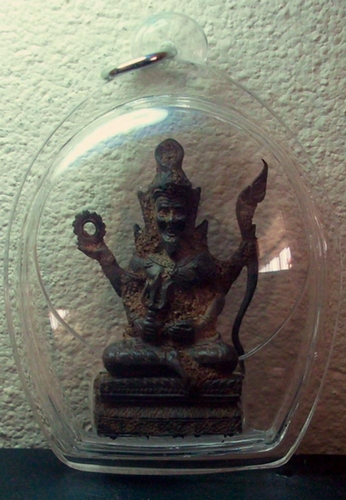 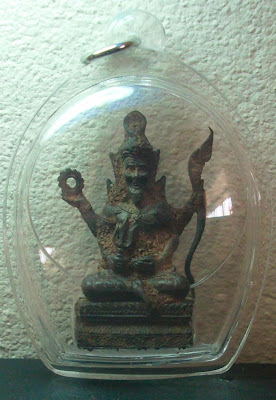 Luang Por Daeng (Duang Sethee) made and blessed this Powerful Ruesi Deity amulet. Ruesi Narai is not a human Ruesi, but a Deity of the Angelic Realms. He is depicted with 4 arms. This Ruesi is an emanation of Pra Narai (Vishnu Avatar), who is one of the three lords of Heaven (Shiva, Vishnu and Brahma). This Ruesi is the Vishnu Avatar who came down and was born as Boroma Kroo (the Guru Yogi Ruesi Narai). He has great Magical power and is an adept magician, radiating much Metta Mahaniyom power for luck, and preferential treatment towards those who Bucha this Deity. 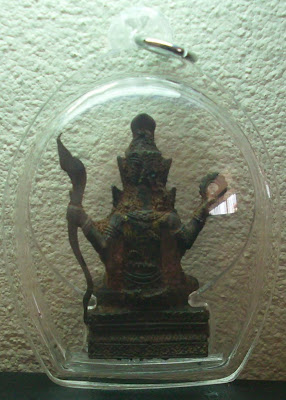 Whoever prays to this amulet is praying simultaneously to all ten Avatars (Incarnations) of the God Vishnu.

Pra Ram (Rama), Pra Krisna (Krishna), the Buddha and Maitreya are included in this list of ten (some people even say that Jesus was one of the Avatars - but this is arguable). 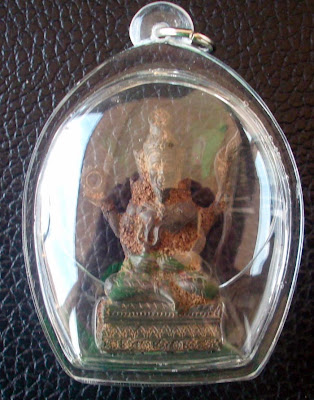 The true color of this amulet is more like it is in these pictures, which had too much reflection to use them as the main pics of the post, so i added them here for your comparison of the different lights.
The base of the amulet has a coded coin and Paya Gai Gaew crystals with Nuea Rae Athan inserted into the base, along with sacred powder cement. 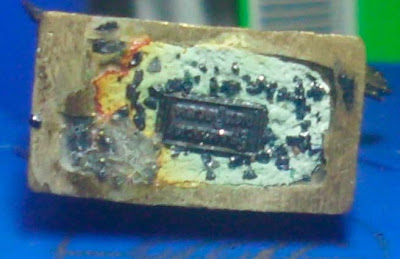 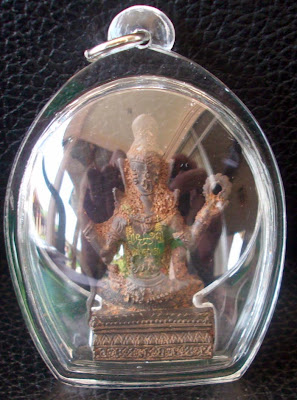 This amulet comes (as usual) with free waterproof casing, and registered international airmail postage included in the price

Whoever makes Bucha with the Narai Ruesi amulet will receive help from friends and strangers alike, preferential treatment, and be loved by all people who surround the wearer. Deities, fairies and benevolent spirits will come to your aid, and take care of you, lending protection and favour.
Por Phu Ruesi Narai was made by LP Daeng of Wat Huay Chalong (Uttaradit) for the Wai Kroo Master Day ceremony of his 92nd year of life. He made the amulets because many years ago he was very ill and paralyzed, and went to hospital for many days to be treated. As he was there, he had a Nimitta vision appeared of a Ruesi with four arms and a purple skinned body. 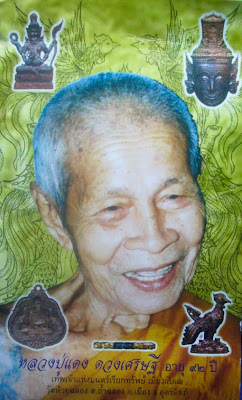 This Ruesi had a weapon in each of the four arms; Bow/arrow, Conch shell, Trident and Chakra disc. The entity approached him holding the Conch shell and gave it to him, and promptly disappeared.
As morning came, Luang Phu Daengs illness had completely disappeared, and he was able to leave the hospital and return to the Temple.

Sacred contents;
Din Jet Bpong (earth from seven salt licks), Pong Paya Gai Gaew (crystal cockerel powder) and a coded coin inside the base
Blessing;
LP Daeng first awakened the eyes of Ruesi Narai by meditating and empowering the amulets for 9 days and nights alone. After this there was a grand Puttapisek ceremony at Wat Sutat temple in Bangkok on the 27th May 2551, with LP daeng as the presiding Monk of the ceremony. Many other Nationally famous Gaeji Ajarn were attending to add their magic to the blessing, such as Luang Por Siri (Wat Dtan, Nontaburi)Luang Por Foo (Wat Bang Samak, Chachoeng Sao), Luang Por An (Wat Rong Koh, Utay Tani), and Luang Por Som Kid (Wat Nern Satara, Utay Tani) 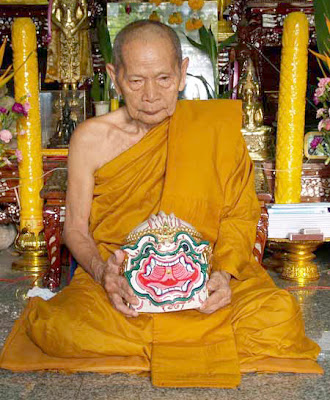