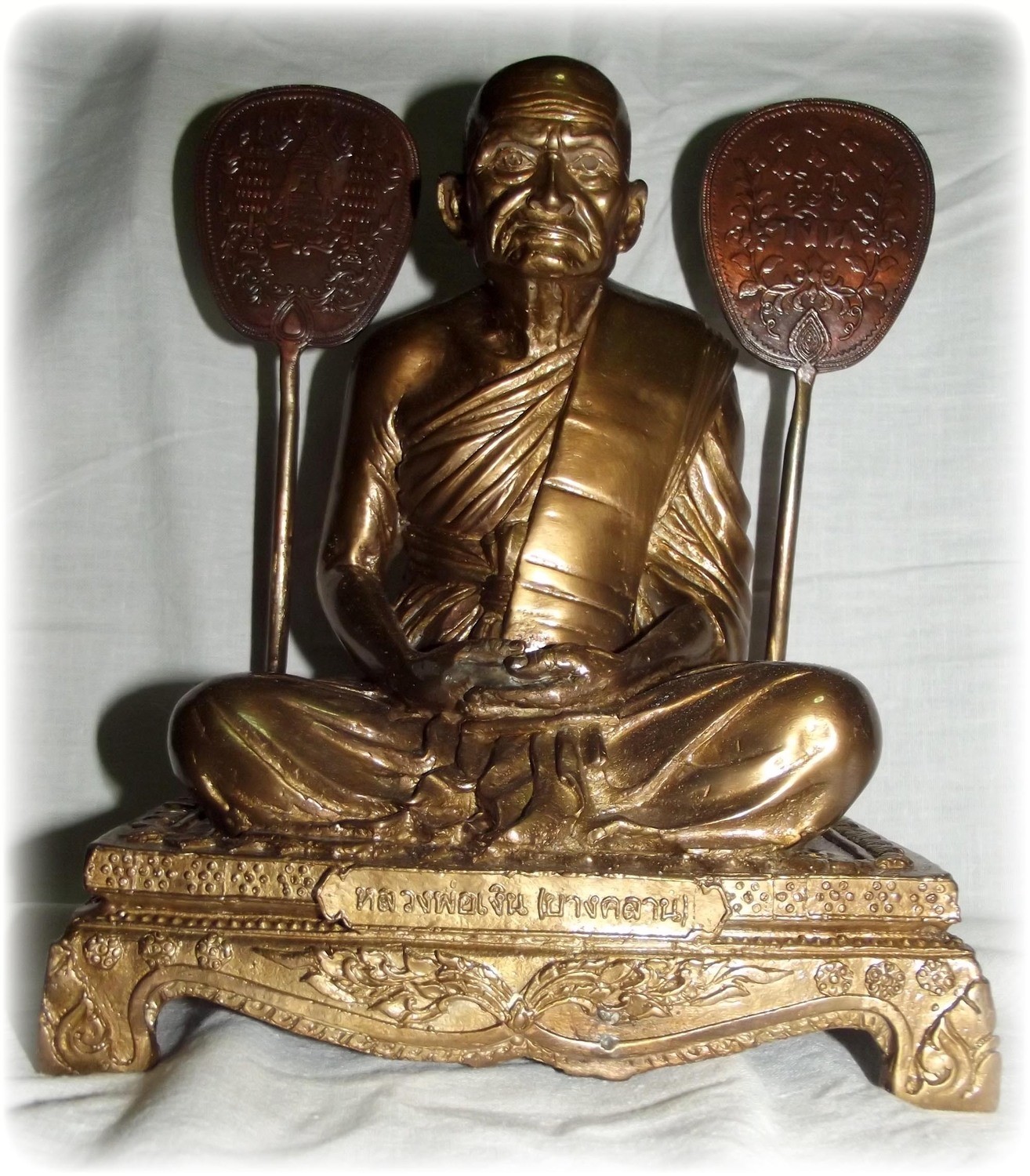 This exhibit is 5.5 x 7 Inches in size, and features the Image of Luang Por Ngern of Wat Ban Klan sitting on a Dais with a pair of 'Pat Yot' Ritual Fans either side. The Pat Yos is used to Mark Status in Official ceremonies, and is derived from a Sri Langkan tradition. The Fans are also used to cover the face of the monk when giving the blessing to Devotees, as representative of the Buddha. 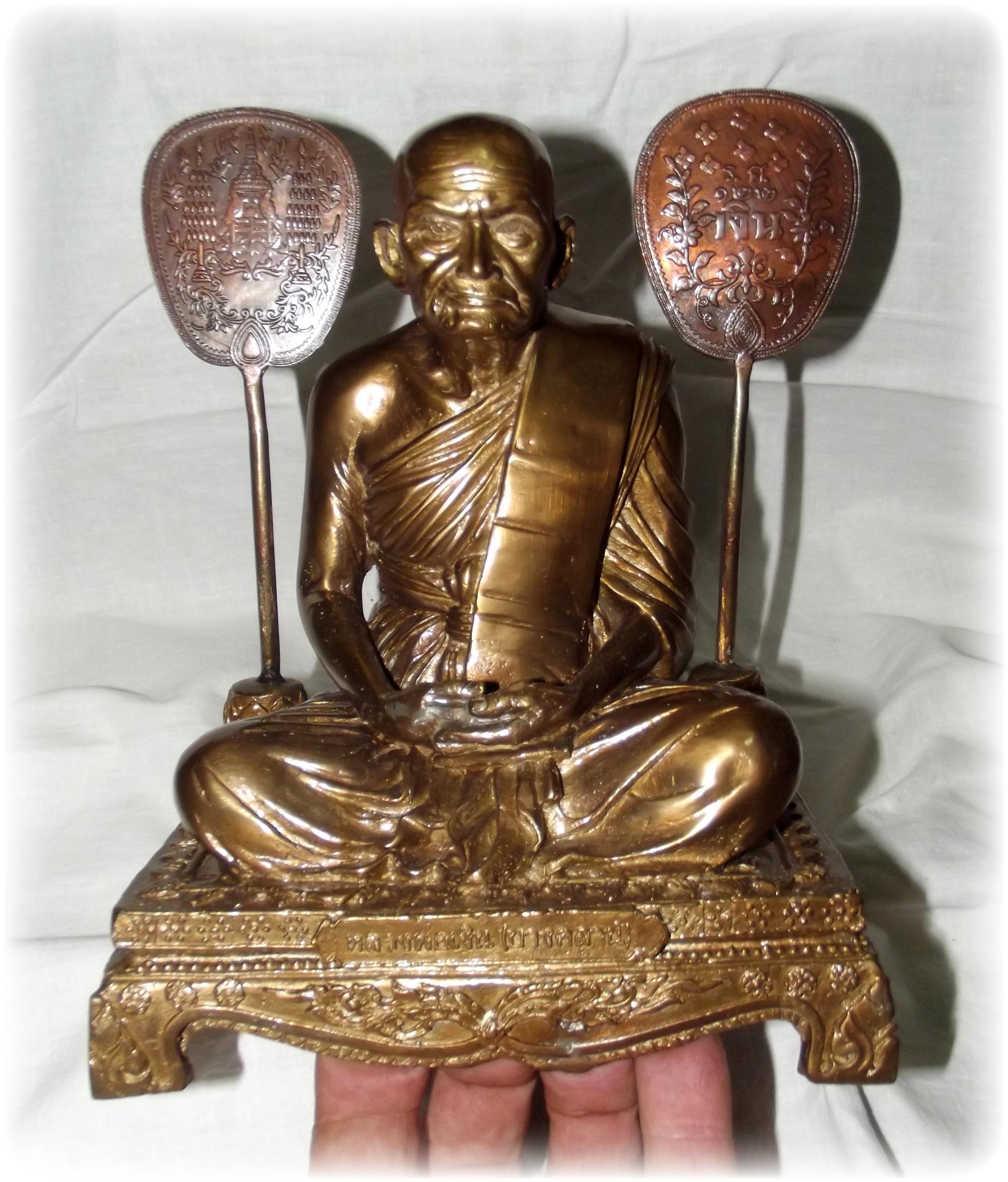 These Pad Yot fans are in the 'Bai Dtan Badtr' shape, which is the first and original shape they were given when they fans first came into use after Royal Decree giving permission to make them as Ritual Instruments for Royal and State ceremonies only. 'Bai Dtan' is the sugar palm tree leaf, which was used to make the fans in Olden Times.

Luang Por Ngern amulets and statues are considered one of the Amulet Worlds Eternal Classics, comparible to the japanese tattoo in this sense (will never go out of good taste, and will always look good, and have meaning, in whatever Era it is seen - forever popular). 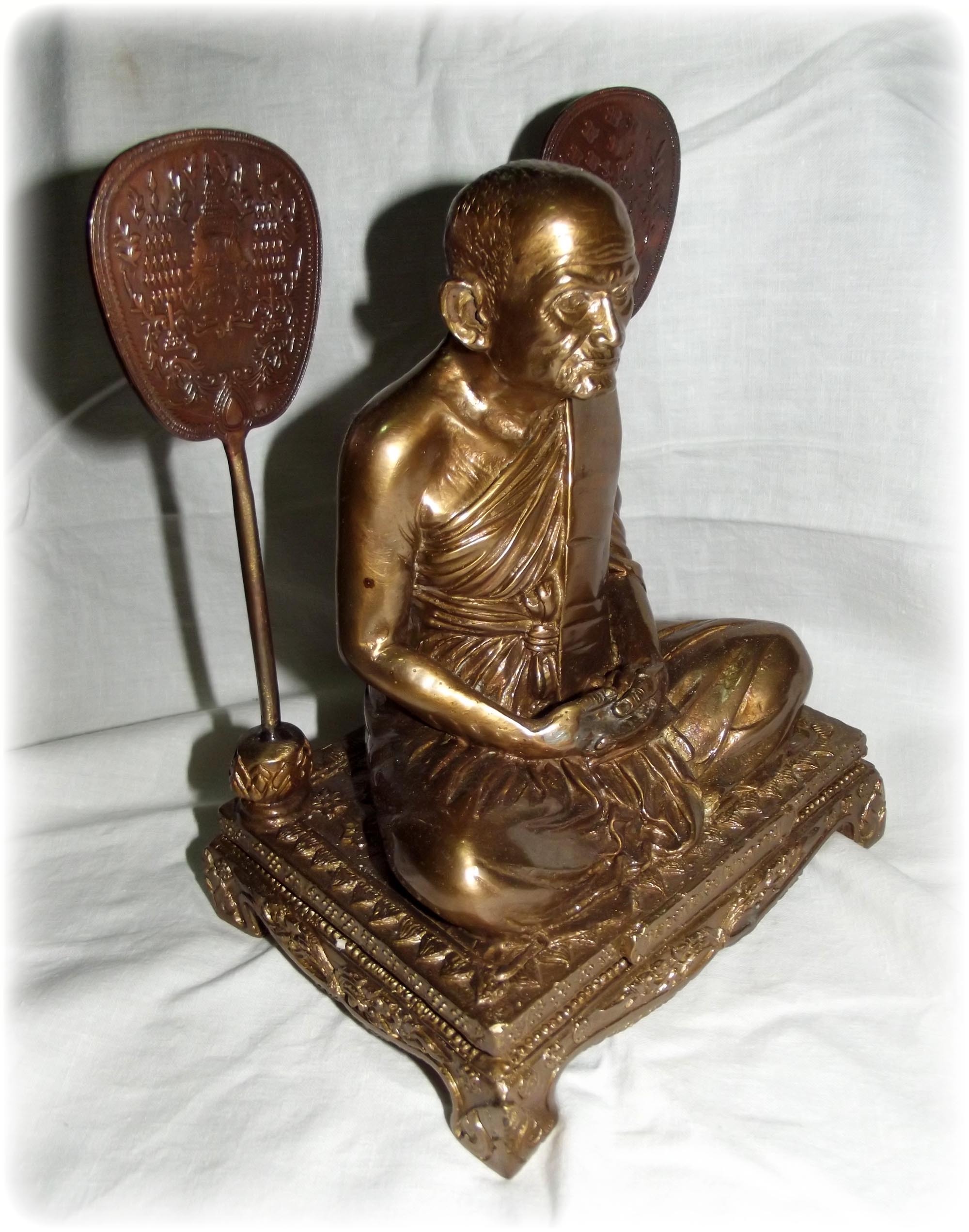 It is believed by Thai people, that the Image of Luang Por Ngern has always been associated with acquiring riches, and that Great Wealth is one of the Blessings from his amulets and making Bucha to him. It is also believed that Luang Por Ngern will keep You Safe and Far from Dangers, Protecting and Increasing Prosperity. 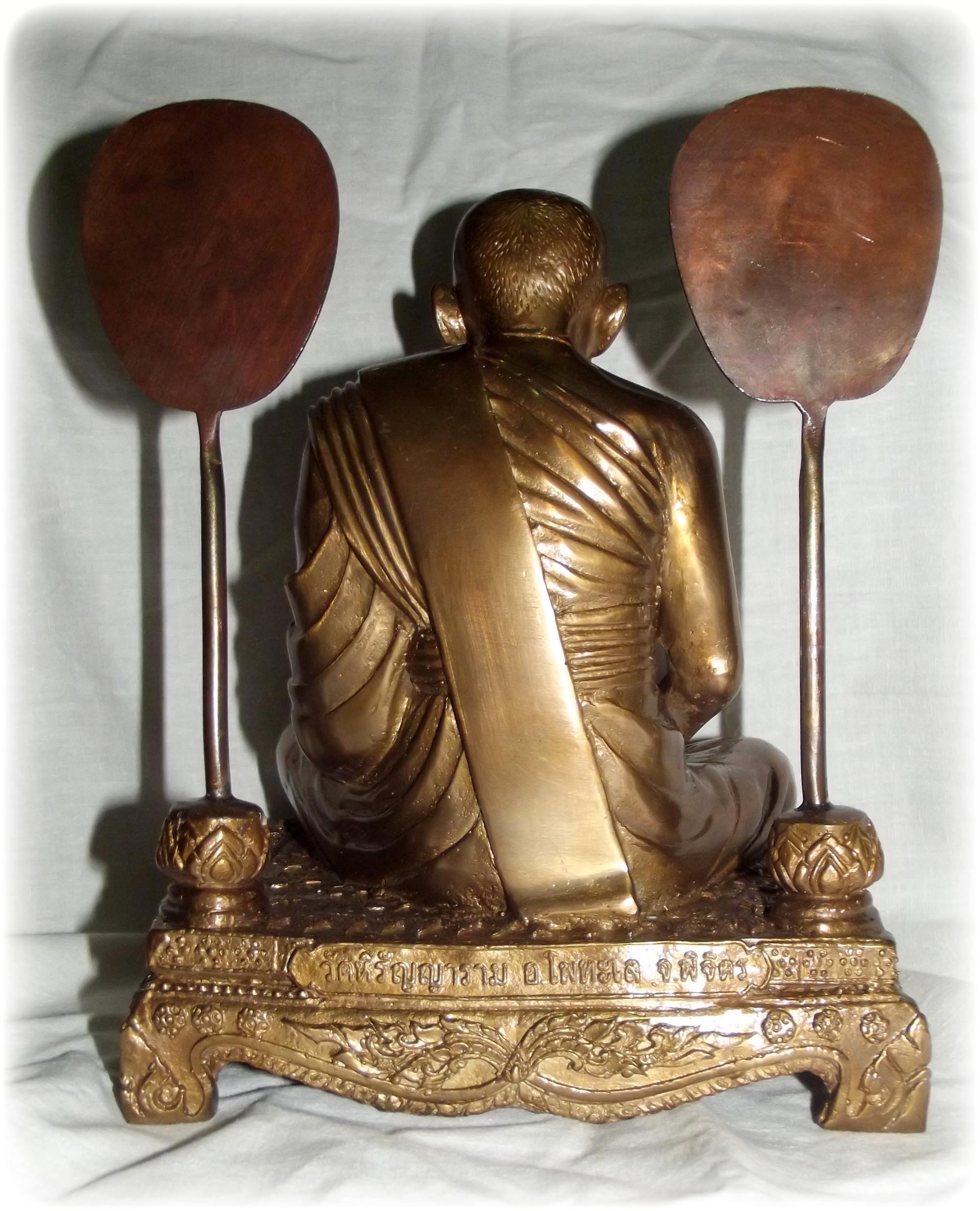 The rear side of the Dais has the name of Wat Hiranyaram Temmple, who were the Official Issuing Temple for the Edition. Wat Hiranyaram is where the Heart of the Luang Por Ngern Lineage passes.

One thing that is seen to be Miraculous about Luang Por Ngern Images and Amulets, is that, just like Luang Por Tuad Images, it is irrelevant whether Luang Por Ngern lived to Bless the amulet, or if it is a later edition that is made in his Image, both types of amulet bring the same Miracle Power. This is considered by Thai Buddhist people to be a sign of True Miracle Power, when simply the Image of the Monk has power, without the Monk himself having to have Blessed It. 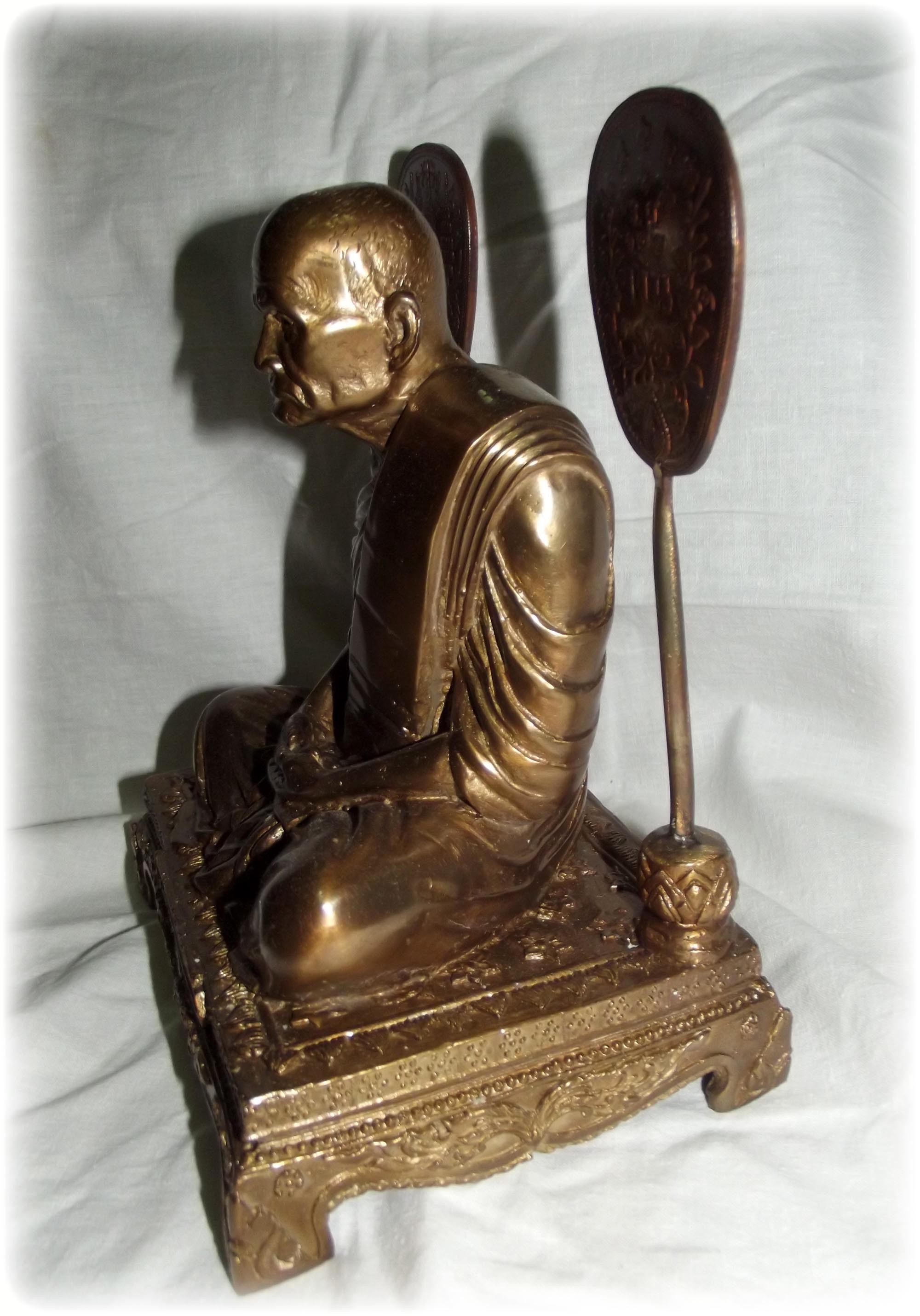 Of course, the statues were Blessed and empowered with the Lineage Masters of Wat Bang Klan present to Invoke the Mental Presence of Luang Por Ngern, and Invite to dwell within the Bucha Images, and therefore, this is also another reason why LP Ngern (and Lp Tuad, Klai, Kasem, Mun) will always be powerful, if made and Empowered by the True Lineage Masters to Invoke the Spirit of Luang Por to come and Dwell within them. This is the whole Point of Lineage Transmission in Thai Buddhism, and Occultism. 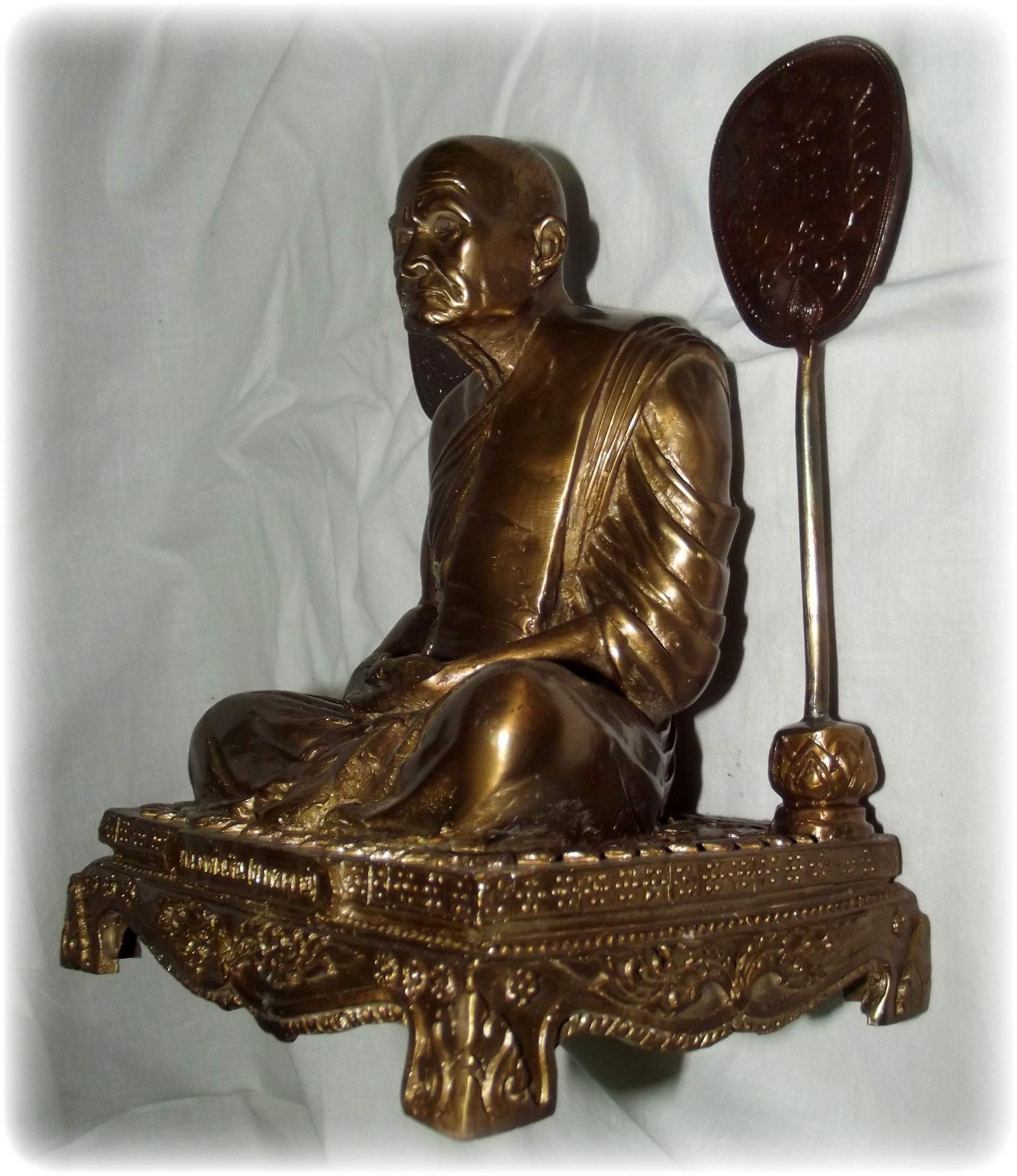 Because of the Surety of the Sacred Power and Value of Luang Por Ngern Images, all Editions sell out, and become Classic Rarities, and Collector Showpieces. The Luang Por Ngern Putta Chote 2551 BE Edition is now already a rarity, and would be the Pride of any Thai Buddhist's Altar, and indeed proudly placed on any Monk's Altar or Temple Shrine in any Thai Temple.

A Truly Sacred Authentic Buddhist Monk Bucha Statue of Excellent Artisanry and Fine Casting, with Truly sacred Value, Empowered with the Sacred Blessings of a Host of Master Monks of the Luang Por Ngern Lineage.

Luang Por Ngern has three very famous Pim Niyom Top Amulets which are collected by the High End Collector and Devotee, which are of World Famous Status and amongst Thailand's most famous amulets of all; the Pim Pae Yim, Pim Khee Ta, and the Rian Pim Job Yai (large size) and Job Lek (small size) triangular coin amulets which he began issuing from 2460 BE onwards. 100 Years later, these amulets are the reason why people around the world have come to know the name 'Luang Por Ngern, Wat Bang Klan'. 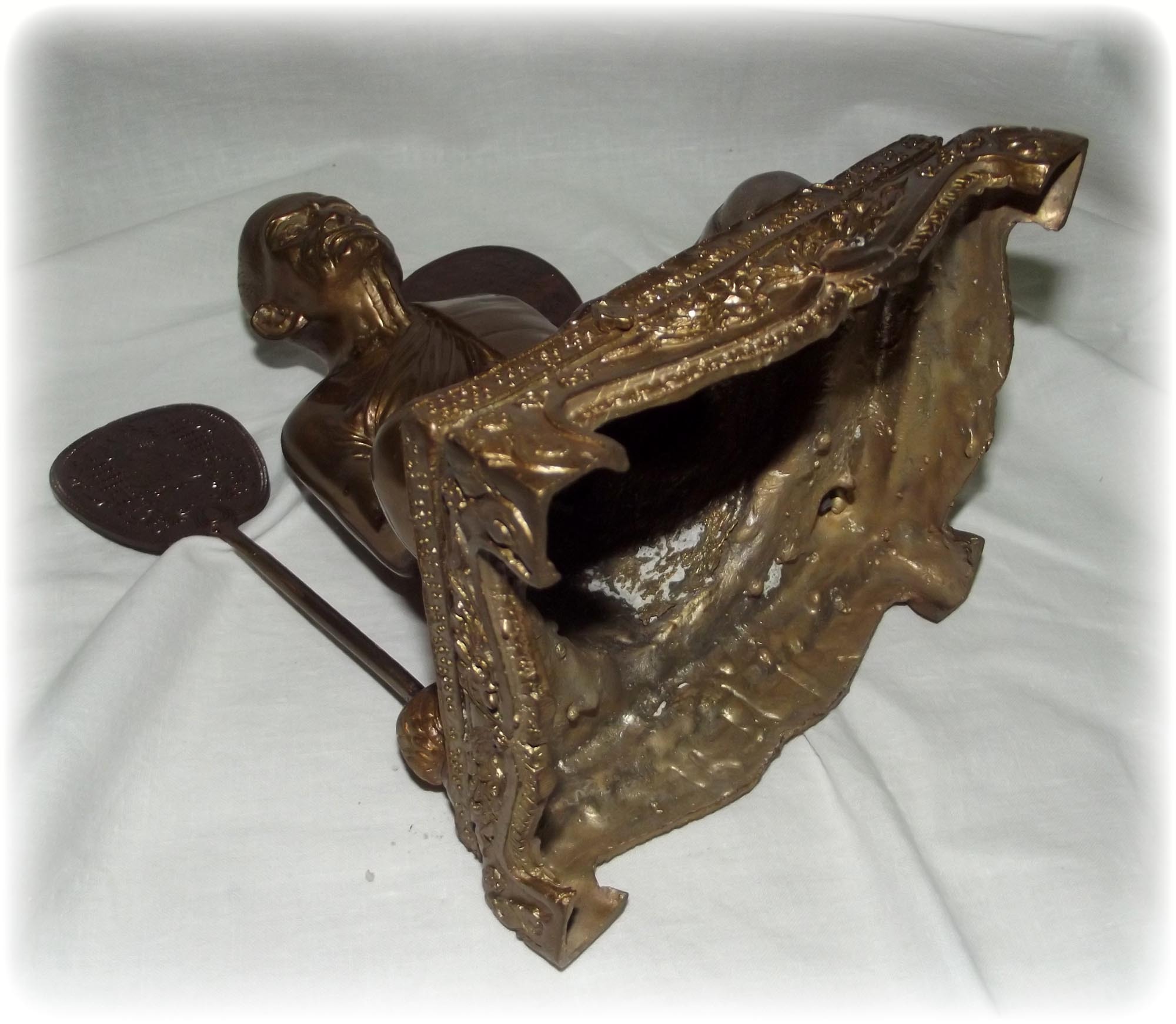 Despite this fact, for those who revere and believe in the Power of his amulets, it is not really necessary to pay tens or hundreds of thyousands of dollars for an amulet by LP Ngern, because the above mentioned Pim (models) are only a few of the many many different amulets he made, ranging from clay hiding place amulets to sacred powder amulets.

It is however the metallic cast amulets such as Monk Coins or the Pae Yim Loi Ongk statuettes which are snapped up by the serious and wealthy collectors, leaving the clay and powder amulets more available, and indeed, for those who seek Power and Sacred blessings, not showpieces for the competition or to boast with, the clay and powder amulets are of course just as Sacred and Powerful as the metallic ones!

Those who seek Sacred Power are free from the need to buy the most sought after expensive model, and can truly seek an authentic amulet from an authentic Master of Old if they dont need the most famous model. 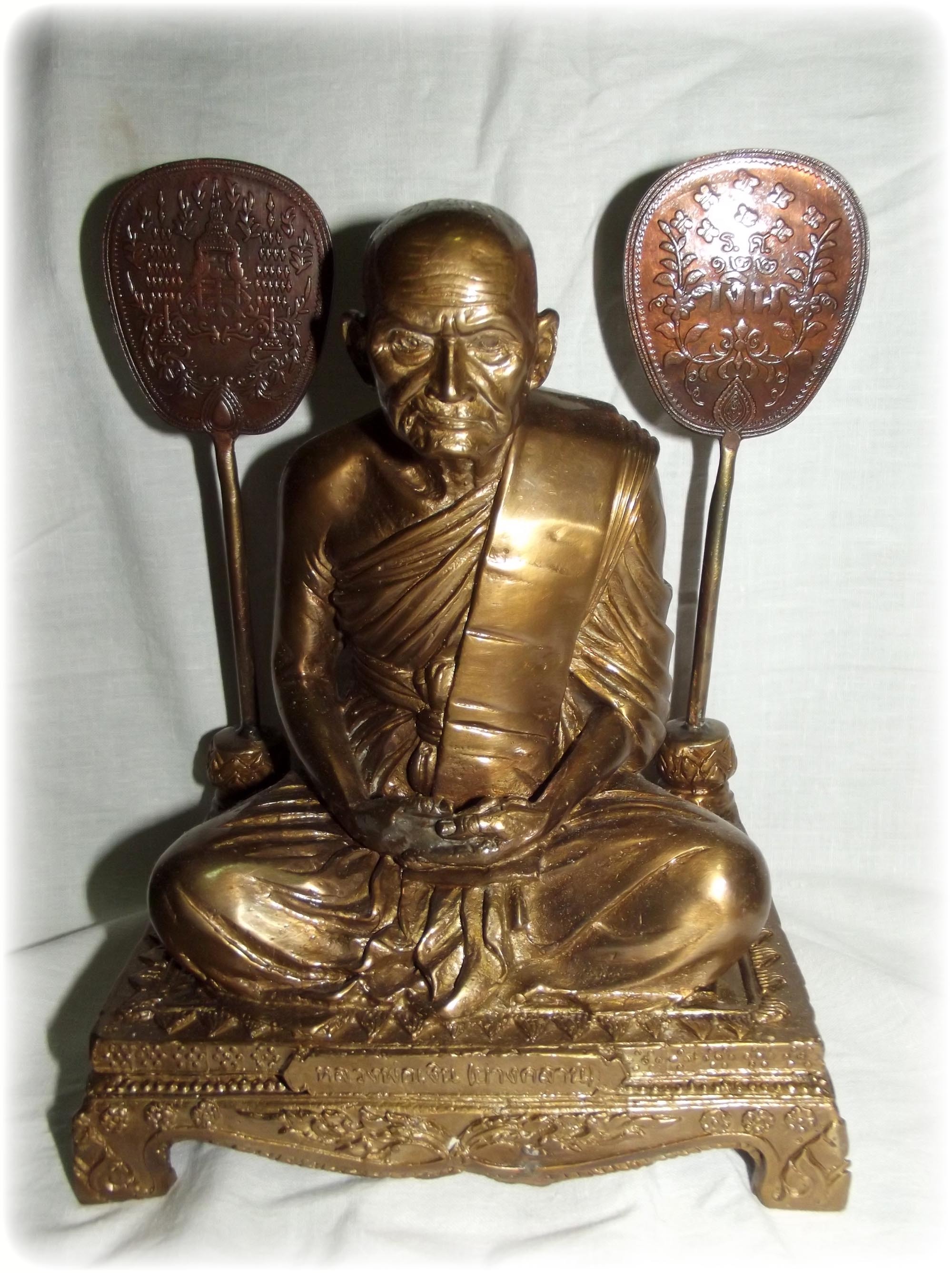 Recommendable both for the Home Shrine, or for the Corporate Shrine or place of Business, the statue is especially Recommended.

Then Chant the Kata

In 2555 BE, Wat Bang Klan issued a reproduction 3 Inch model of this statue (see below pic), proving the Popularity of this 2551 BE Edition and simultaneously Increasing the Status of this statue, for the fact that it has already been replicated in second time Issue as a Nostalgia Piece, leaving us to wonder further, how much of a Classic rarity this Bucha Statue is to become in the Future, as the Years Pass by. 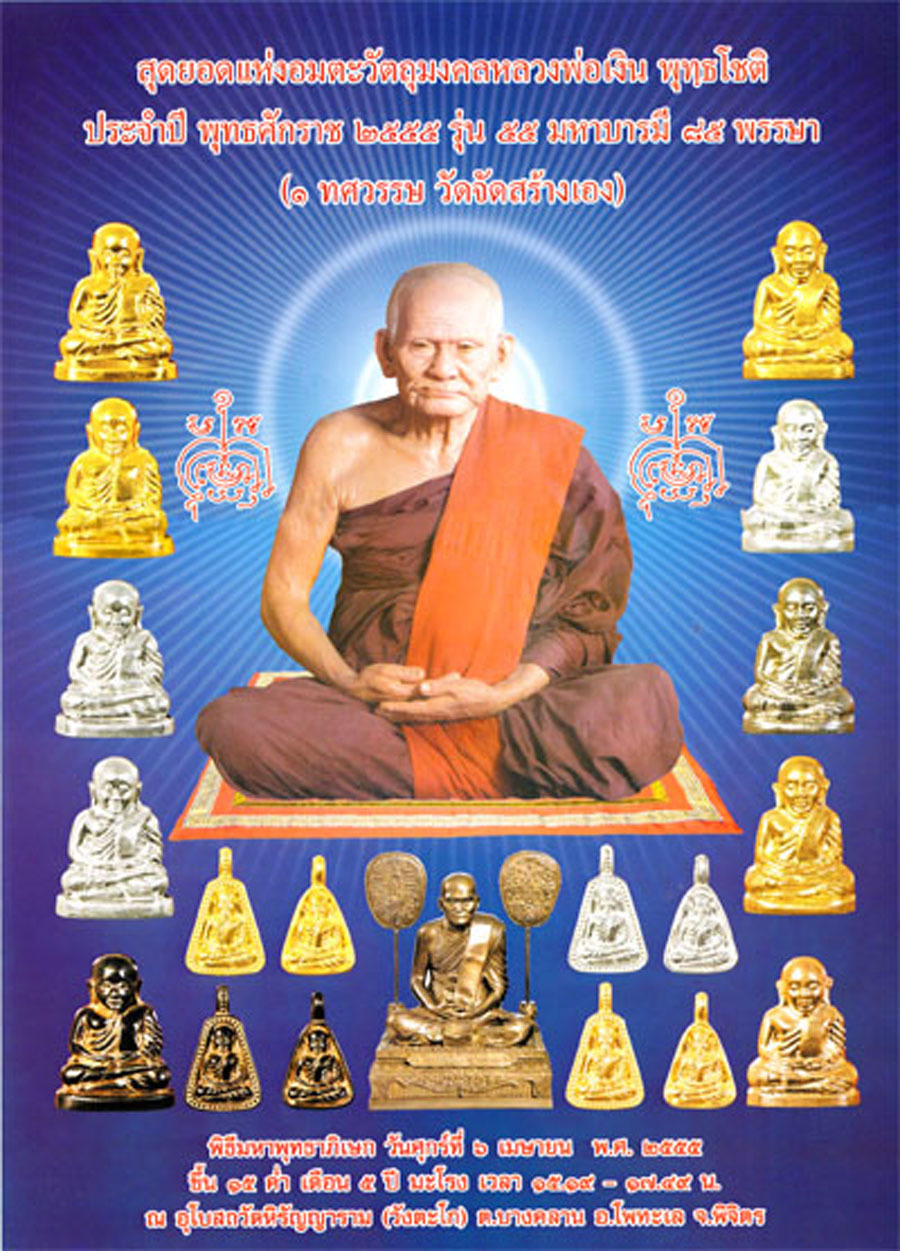