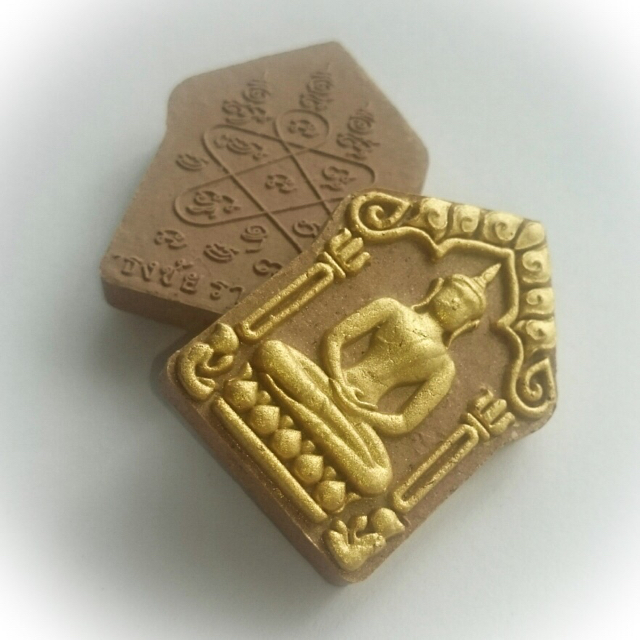 These special edition Pra Khun Phaen amulets are made by Jao Khun Tong Chai of Wat Dtraimit Temple, and are created in the Dtamra of Jao Khun Tong Chai's Kroo Ba Ajarn, 'Luang Phu Tim Issarigo' of Wat Laharn Rai. The amulets were created to allow the temple of Wat Pone Ngam in Chachoeng Sao, to release them as an edition, in order to raise funds to build a Sala Bprian Study Schoolroom

These amulets have recieved three different empowerment stages with a host of great Guru masters to add their Blessings to them, including Luang Por Foo, Luang Por Khaeg, Laung Por Tong Chai, and Luang Por Cheuy, the Abbot of Wat Laharn Rai, amongst others.

The amulets were blessed first as Muan Sarn before pressing, at Wat Laharn Rai in the Vihara Shrine Room, invoking Luang Phu Tim's Blessings, with Jao Khun Tong Chai performing the 'Piti Pluk Sek' Empowerment of the Muan Sarn powders for the making of the amulets. The empowerment session was performed inside the Shrine. 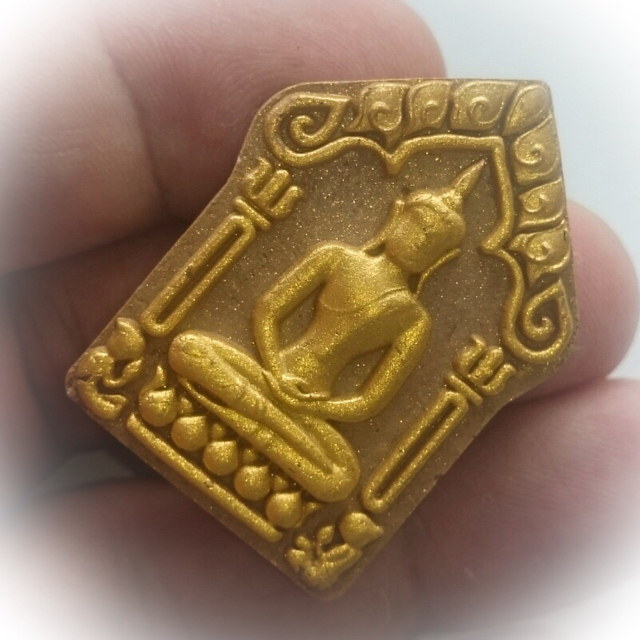 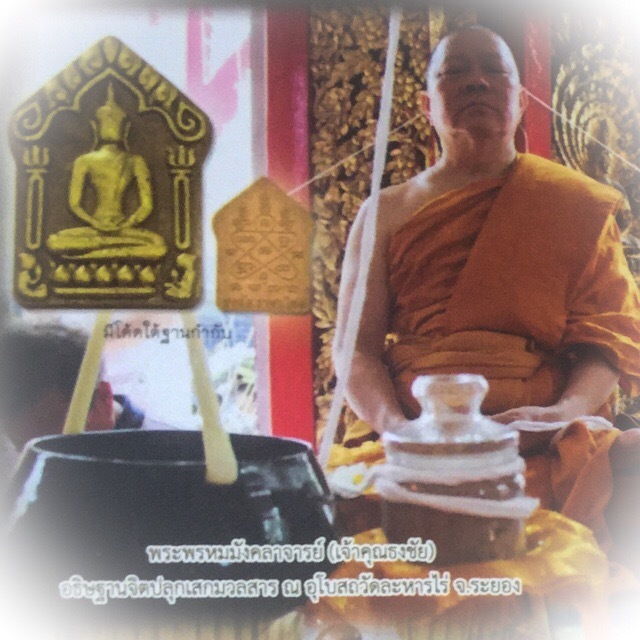 Above; Luang Por Jao Khun Tong Chai performs empowerment of the Muan Sarn at Wat Laharn Rai, within the Uposadha Shrine Room. Jao Khun Tong Chai of Wat Dtraimidtr has learned many forms of sorcery from various great masters of history, including Luang Por Kasem Khemago of the Samnak Songk Sussaan Dtrailaks (considered to be an arahant) in Lampang , Luang Por Buddhadhassa Bhilkhu of Wat Suan Mokkh in Surat, Luang Por Buddha, Luang Phu Tim of Wat Laharn Rai, and most of all under Luang Por Koon. He has made many different series of amulets, and has become most notably for his making all of the Rian Ro Ha Song Yin Dee Rama 5 amulet, and various series of Pra Kring Buddha statuettes. 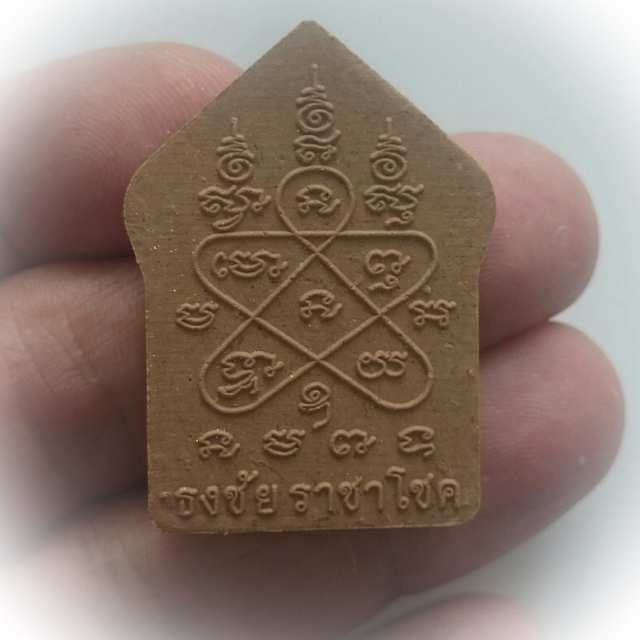 To the flanks either side of, and between the legs of the Buddha Yant Ongk Pra, are the syllables 'MA A U' 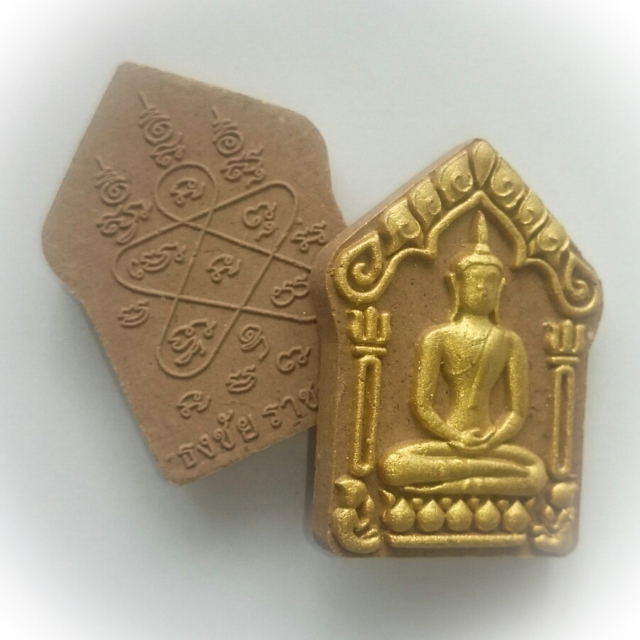 In addition, a donation of Sacred Pong Prai Kumarn powders from Luang Phu Tim were given to  the temple to be used for this 'Tong Chai Racha Choke' edition of Pra Khun Phaen Amulets. 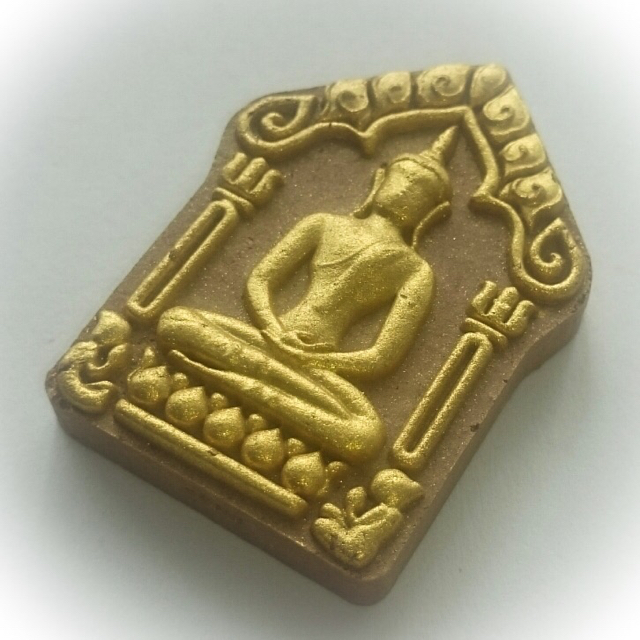 The Prai Kumarn powders were donated by an old Devotee of Luang Phu Tim, and Lay practioner; Ajarn Chinaporn (seen presenting the powders in the below picture). 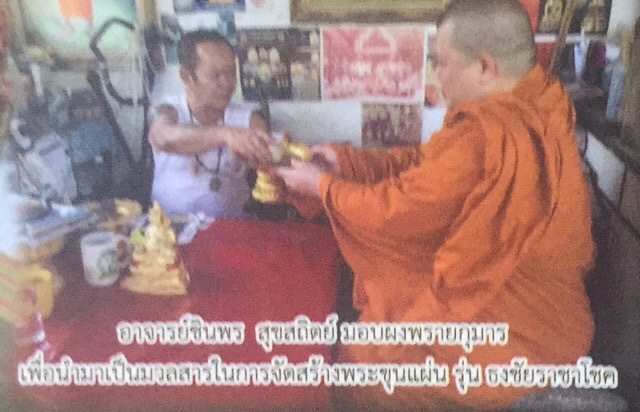 After the Muan Sarn ingredients were empowered and blessed within the Shrine of Wat Laharn Rai, they were pressed into Khun Phaen, and then given a full Buddha Abhiseka Blessing at Wat Draimit Temple in Bangkok. 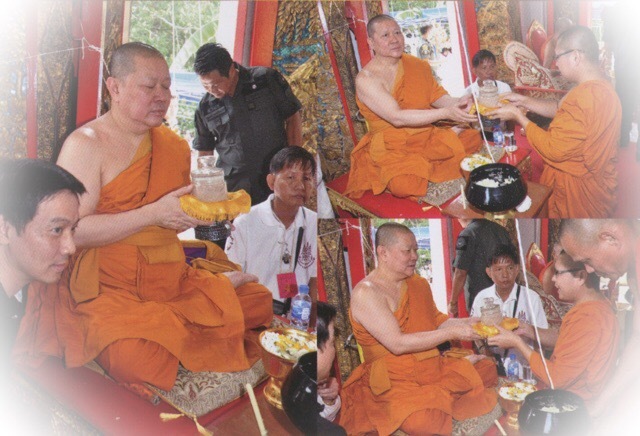 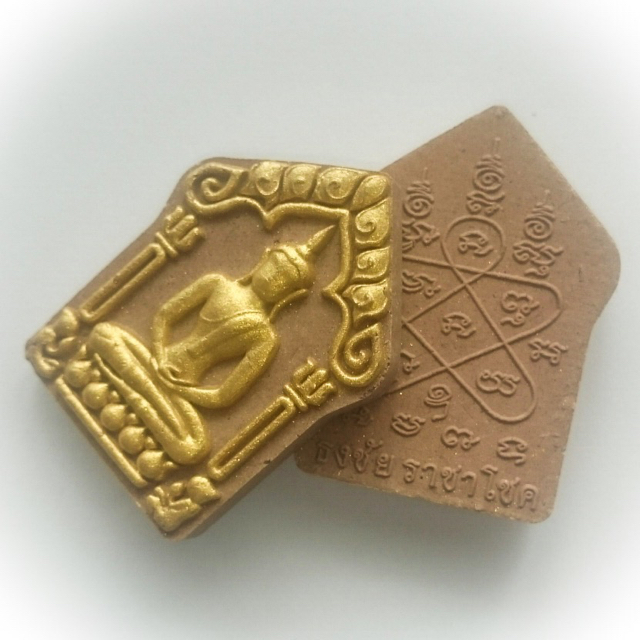 The amulets were also given one more separate Empowerment by Luang Por Jaroen of Wat None Sawang in Udorn Thani, who empowered them in Solo as he was at the temple of Wat Awut Vikasitaram temple in Bangkok. 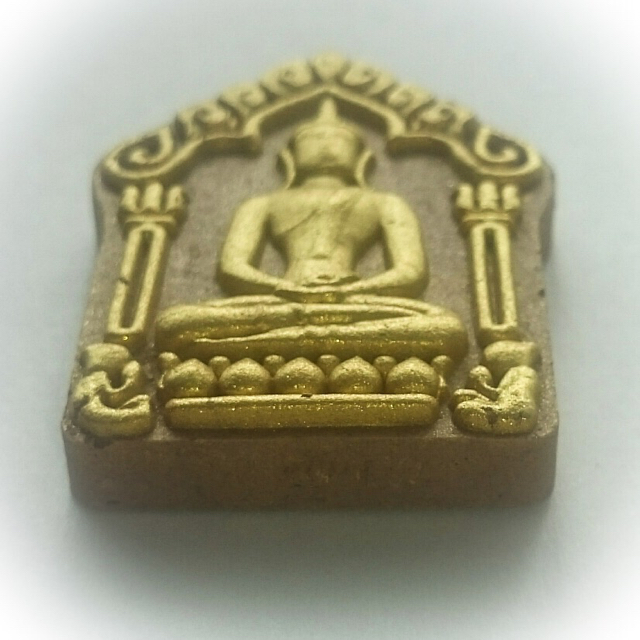 Each amulet has a series number code stamped on the bottom edge of each individual amulet. 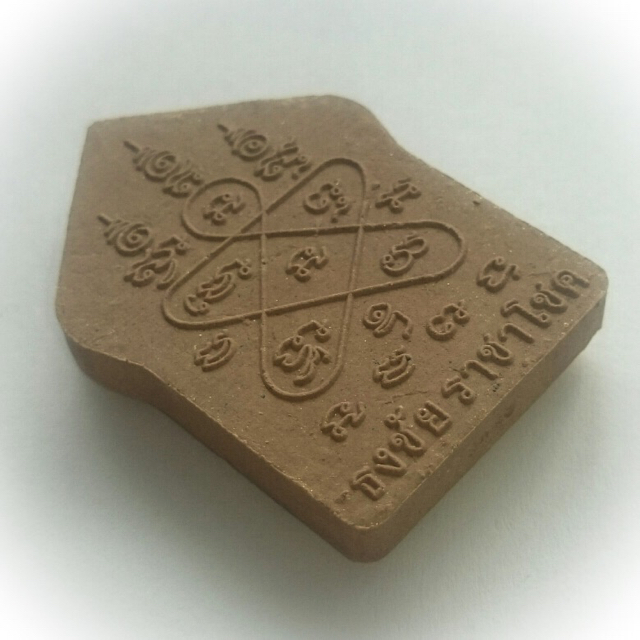 Luang Por Jaroen sat for a long period to empower the amulets in solitary Kasina Meditation, and did not stop the session until he had attained the fullest empowerment and charged the amulets up with his utmost ability. 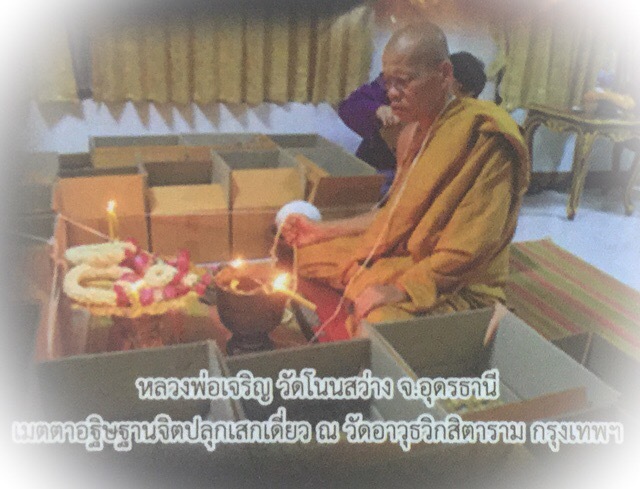 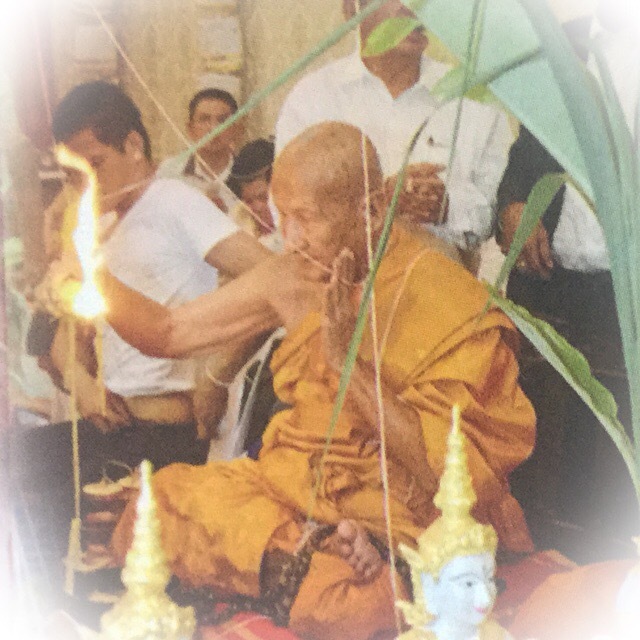 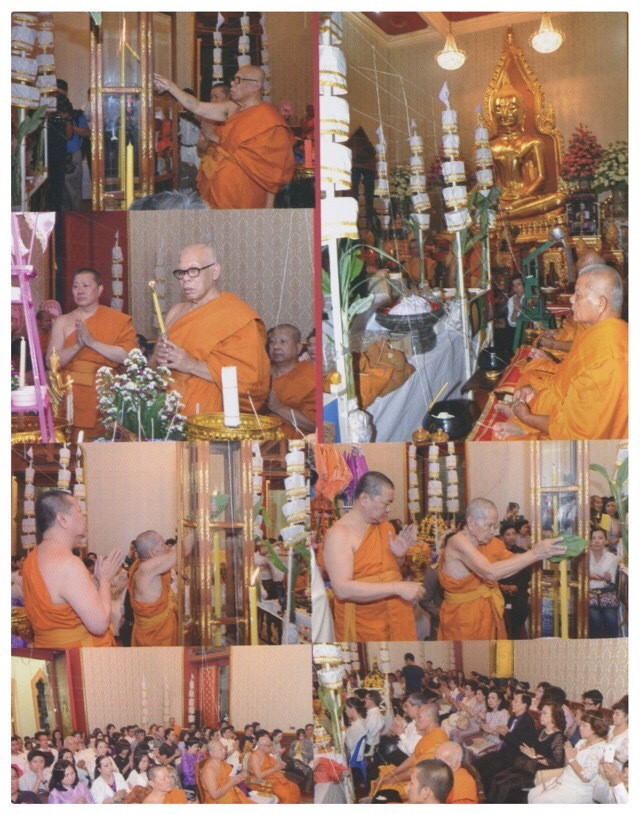 This charitable edition given for release at Wat Pone Ngam in Cachoeng Sao, to fund the building of the School Building. This is only one of many Charitable Deeds performed by the 'Kroengarn Paetch Yord Mongkol Jao Khun Tong Chai' Project, which also focuses on all Buddhism Conservation Work, the Development of Education Facilities, Medical Facilities for the Ordained Sangha and many other Auspicious Activities. The Project is Headed by Luang Por Jao Khun Tong Chai, of Wat Dtraimit. This Great Project renounces any form of Political Influence, and is an independent Buddhist Project. 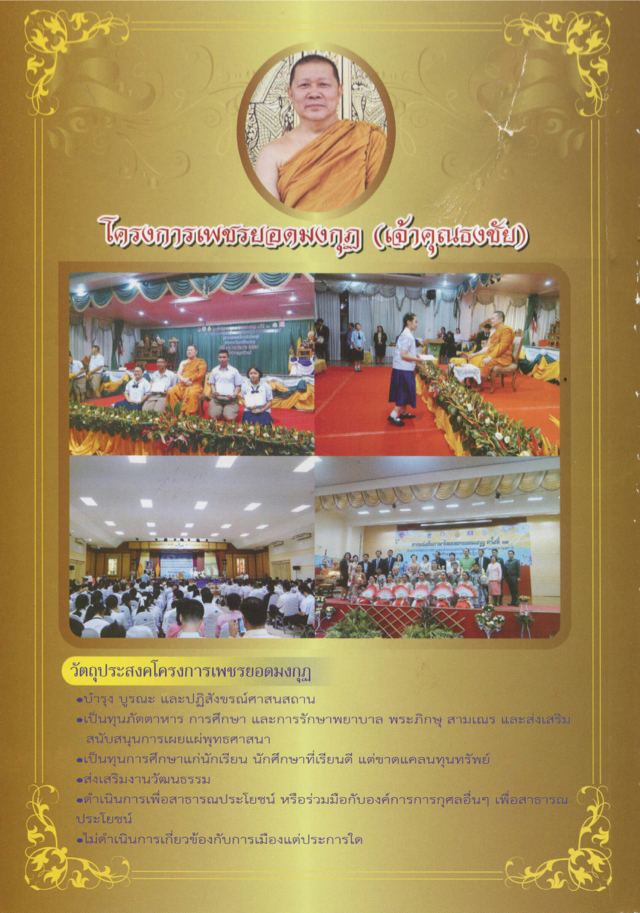 Below; Pictures of the school building in progress, which is still in need of funds to complete the project, and which this edition of Pra Khun Phaen Pong Prai Kumarn will help to fund. 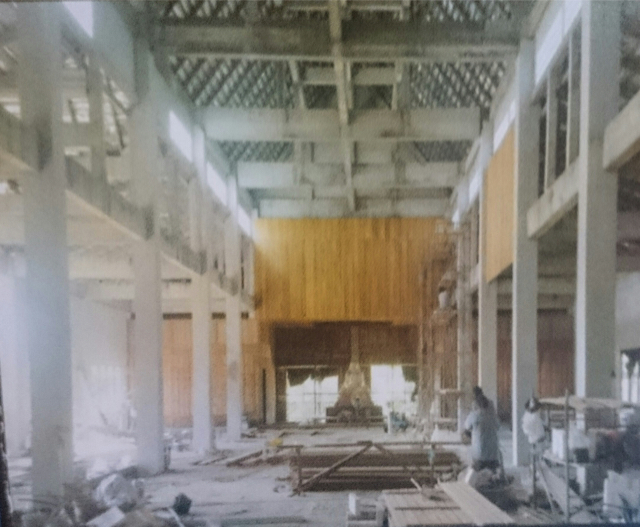 This Pra Khun Phaen Pong Prai Kumarn Amulet comes with original box from the temple of Wat Pone Ngam. Released in 2557 BE. 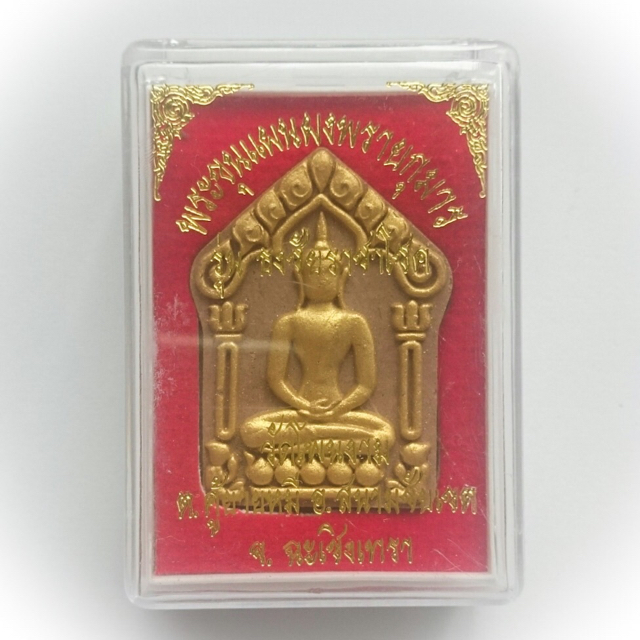