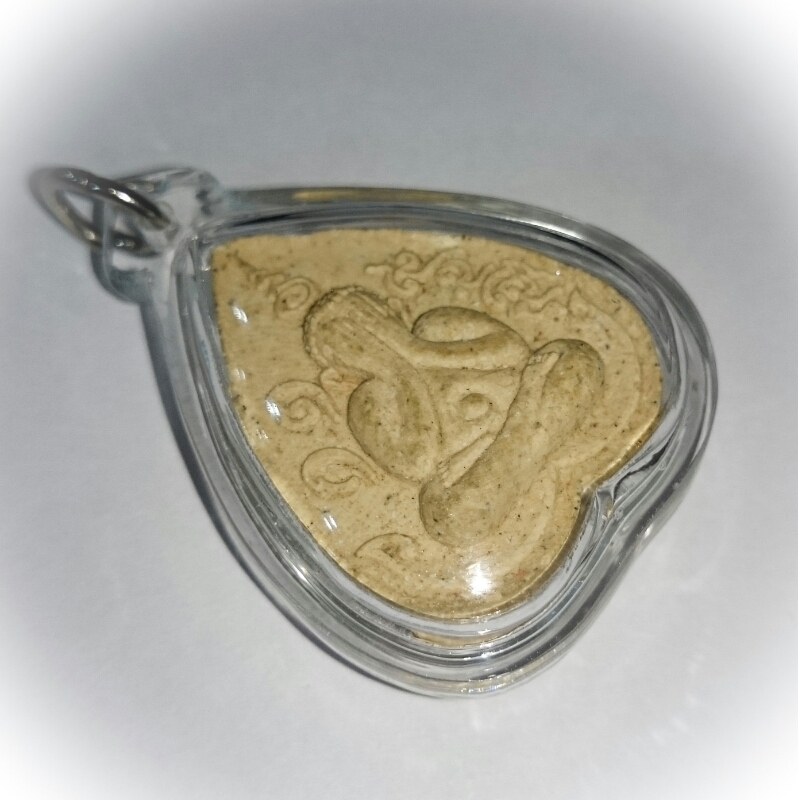 The front face features a Pra Pid Ta Buddha entering Nirodha, within the aesthetic outer frame of a Bodhi Leaf. To the left of the Buddha image, are the letters "G and T', for 'Gata' and the right side has the word 'Banyo' embossed, together forming the word 'Gatabanyo'.

This amulet is an extremely rare amulet to encounter anywhere, for it was only made in the extremely small number of 1299 amulets pressed, and the fact that the amulet was almost depleted shortly after release, by the local devotees of Luang Phu Luang. Estimated Release; Released sometime during the year 2539 BE.

Due to the rarity of this amulet and the fact that Luang Phu never sought to seriously make a big issue out of his fundraising for his charitable projects, it is very difficult to pinpoint the exact date of the month and in many cases, even the year of his Sacred Amulets. It was enough to make them, and raise funds to realise his projects, and so little fuss was made about making officially documented stories about them. However after extremely long research and comparisons, we were able to refine the information to conclude that this amulet was released in 2539 BE. 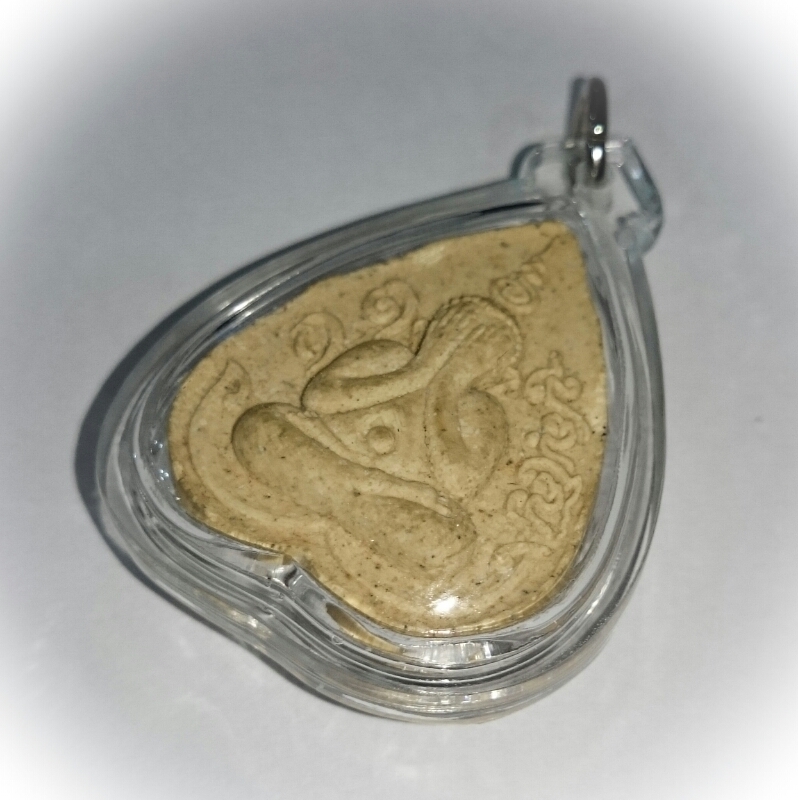 A most attractive amulet indeed. The rear face has code markings (the number 11, an L in Thai and a G in Khmer (L for 'Luang', and G for Gatabanyo), and sacred Lanna Agkhara magic spell inscriptions. 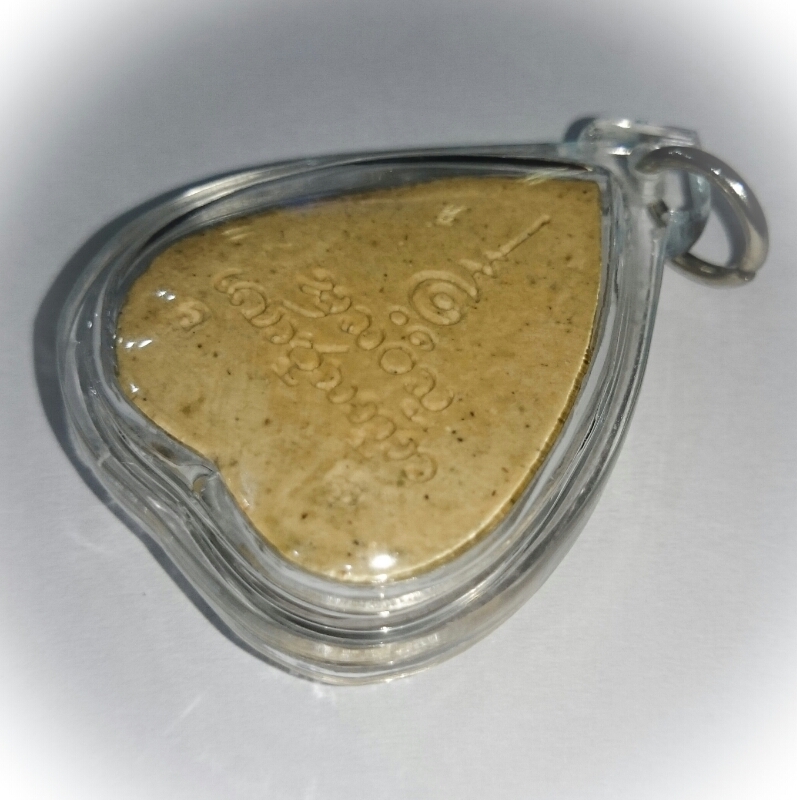 Both the rear and front faces have a Sacred Unalome spiral embossed, representing the crown of the head of the Arahants, and their entry into the stremflow of Nibbana.

Luang Phu's Mastery goes undoubted by those who know him. he was famous for his Tudong travelling, which led him to wander around the whole country during many years, following his practice in the footsteps of the Buddha. 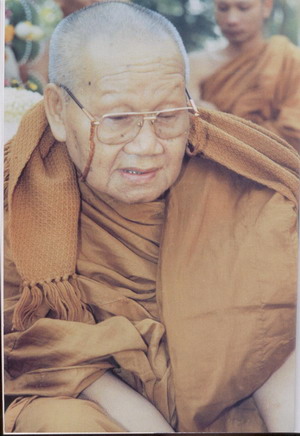 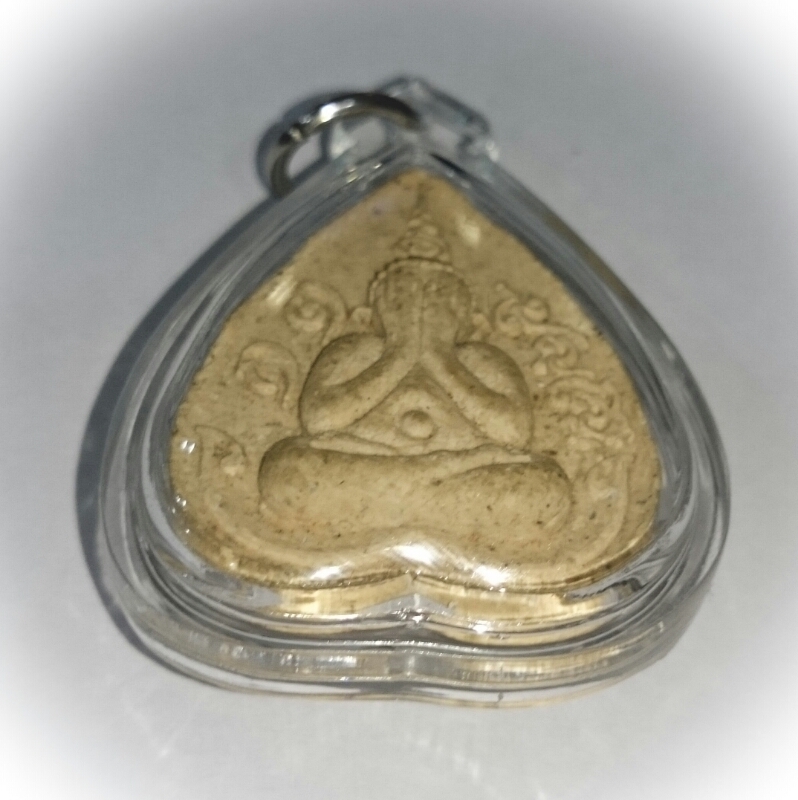 After 8 Years in the Maha Nikaya Lineage, he transferred to become a Dhammayut Lineage Forest Monk, assisted through Luang Phu Sim and Luang Phu Waen in 2493 BE. His Lineage transfer was performed at Wat Chetawan in Lampang, and he recieved the new 'Chaya' (Monks Name) of 'Gatabanyo'. 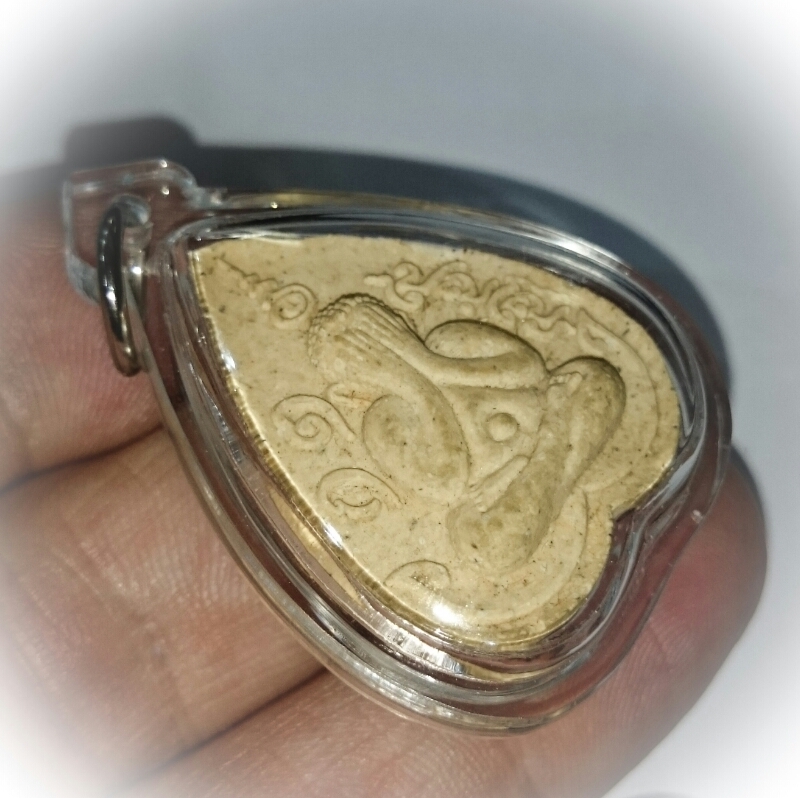 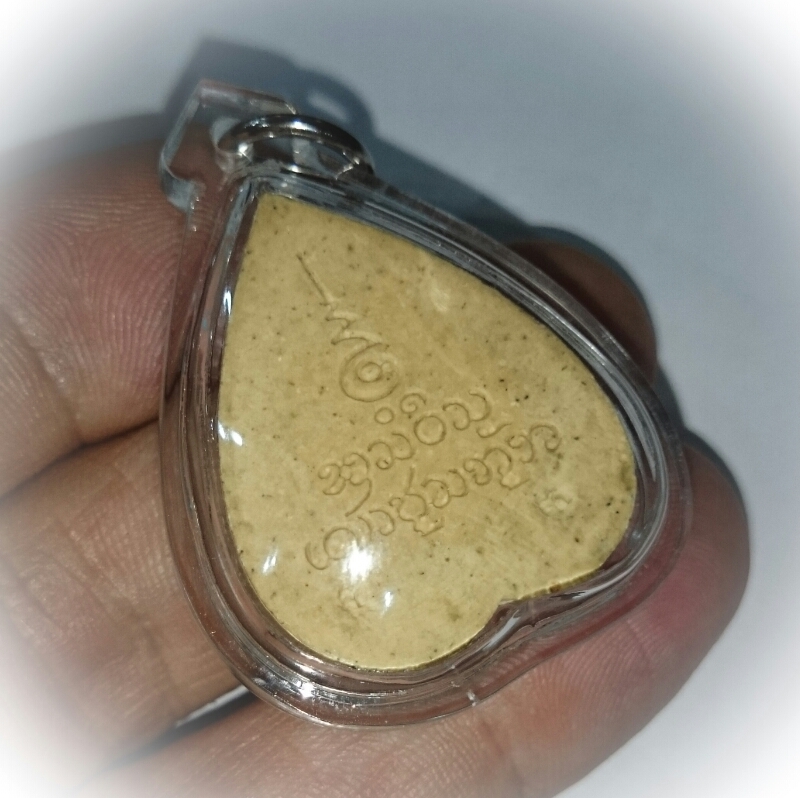 This Pid Ta amulet has beautiful Lanna Agkhara lettering inscriptions on it, and a Muan Sarn (sacred powder) mixture which is second to none. Rare and sacred indeed, and a fine piece of 'Puttasin' (Buddhist Fine Art). Luang Phu Luangs amulets are rather rare. 1299 of these were made, which wasn't even enough to go around between the local Looksit, never mind around the world. 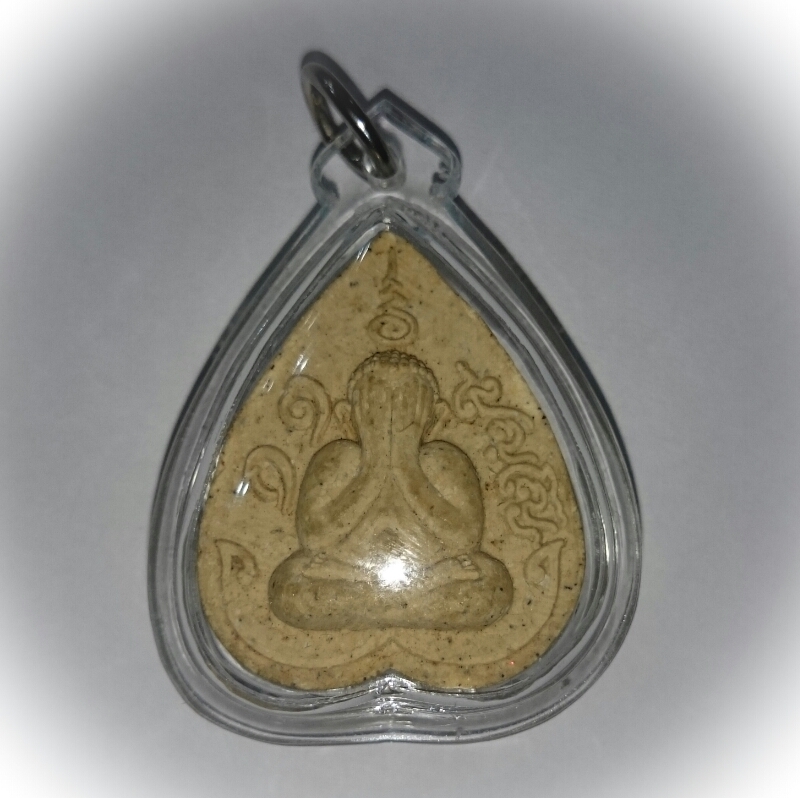 Luang Phus Mortal remains have been discovered to have crystallised into 'Prataat' (Buddha Relics). His great deeds and his Patipata (Trajectory and record of Purity of Practice), are widespread because of the fact that Luang Phu had travelled and stayed for periods at a great many different temples before he built the temple of Wat Sri Subanpot, building Uposadha Shrine for the temple of Wat Pha Samran Niwas. He was also a bleoved monk with the devotees of Wat Tham Pra Sabai, and dozen other temples where he had stayed for periods of time, assisting in developing the temples and helping the local people. 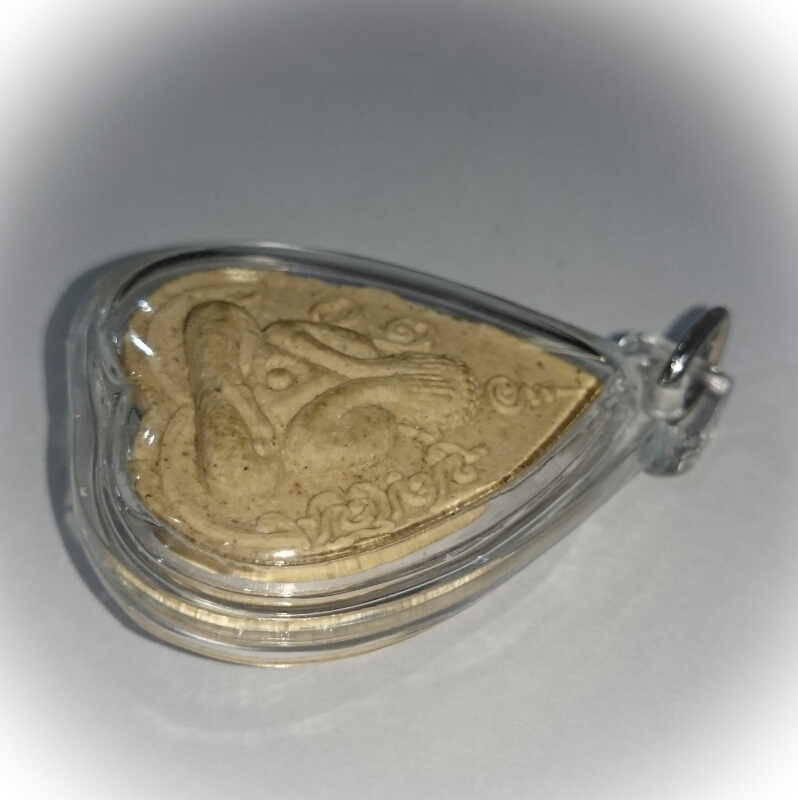 He built a Nakprok Buddha Statue 9.99 Meters wide at the base on the mountainside at the temple of Wat Sri Subanpot, and had performed many charitable deeds for a dozen or more other temples where he had stayed during his lifetime. 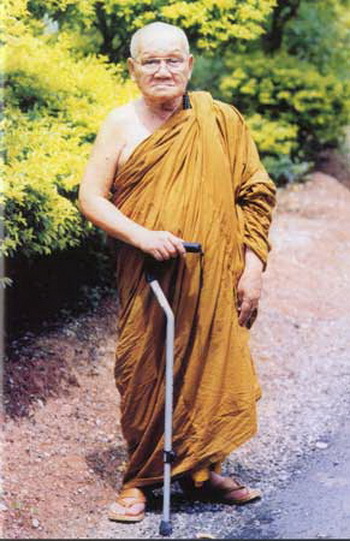 Luang Phu Luang Passed away peacefully, on the 14th July of the year 2546 BE