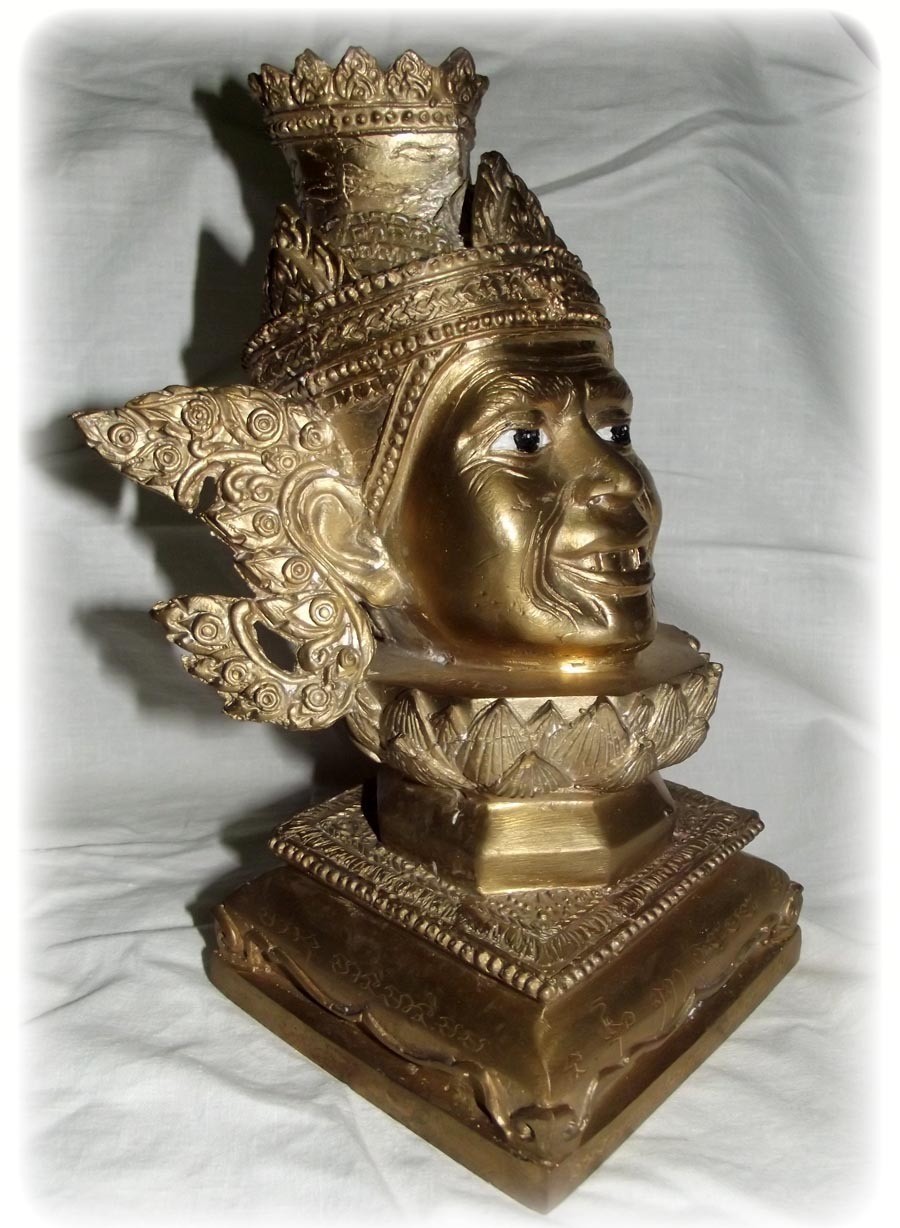 The Bucha Images have recieved hand Inscription of Khom Agkhara lettering from Luang Por, written around the base of the statue. 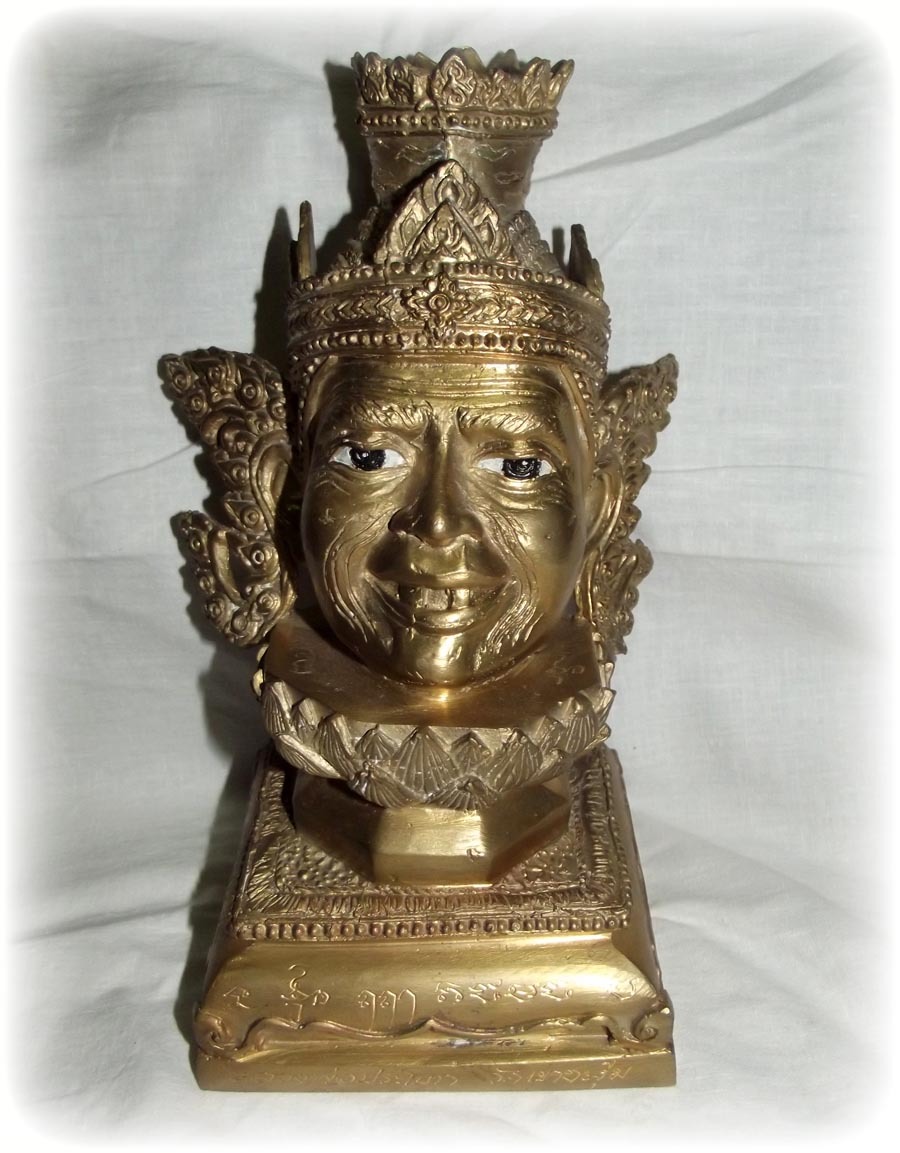 The Bases of the Masks are filled with Sacred Powder, one Siarn Por Gae Loi Ongk, one blessed wristband with Takrut, and one Pha Yant Por Gae Yantra Cloth. 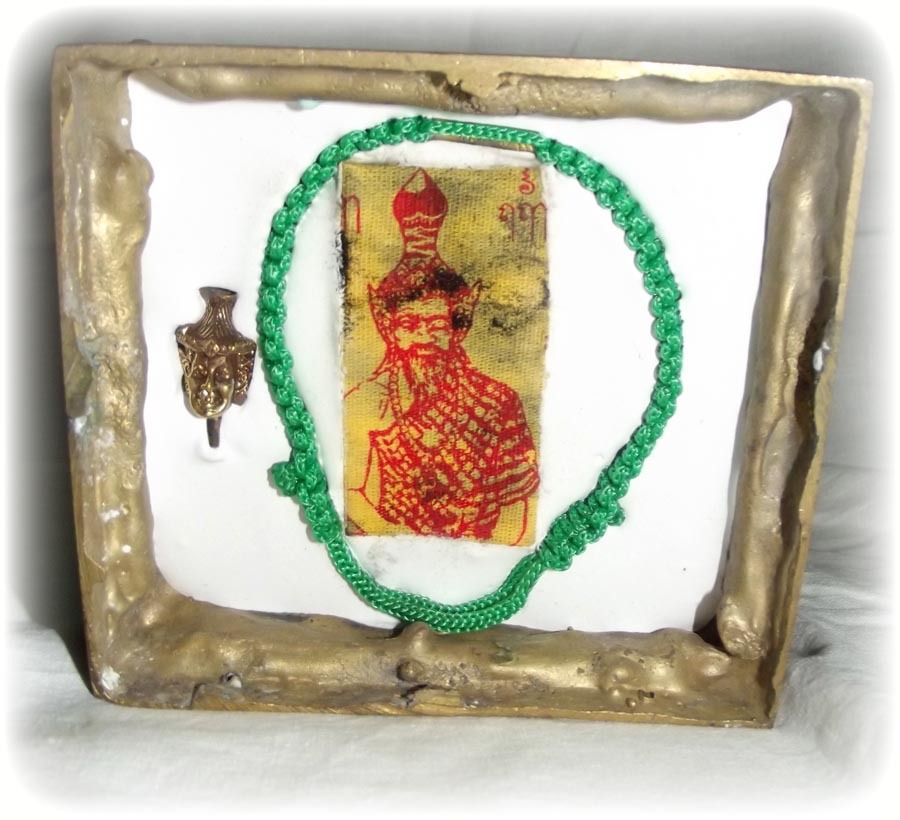 The statues are cast from Tong Rakang Gao (Ancient Temple Bell Brass, Yantra Foils, and other sacred Metals). This edition is a Truly Sacred and Desirable Bucha Item for addition to one's Temple, or Personal Shrine, or Altar of Worship. Bucha Kroo Ceremony can be felt to a much greater depth when inspired by such a Bucha statue in one's home shrine area, for the Sacred Power it Resonates, Instilliing Respect and Reverence, and Spiritual Seriosity within the Heart when one enters the Bucha Area to Pray and give Offerings and Thanks. 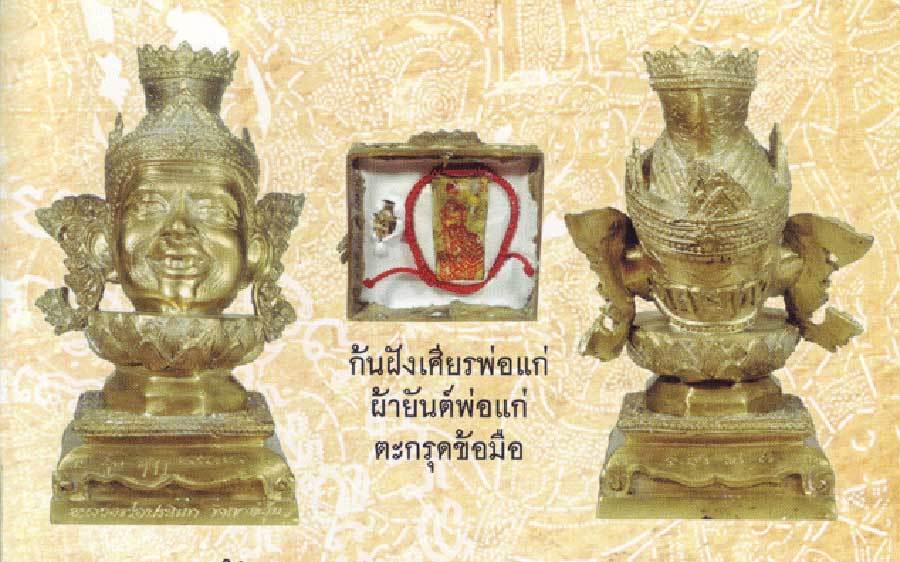 The difference felt from the fact that this Mask is Metallic and thus Long Lasting for Centuries, makes this a much more long standing Sacred Bucha Item that withstands the Aeons longer than any Paper Mache, Powder or Clay version will ever last.

These facts make this statue not just a Bucha Statue, but an Image that will survive far enough to become a True Ancient Artifact, and thus preserve the Dtamnra of Por Gae, and of Thai Buddhism, far far into the Guture, beyond the span of our own lifetimes. 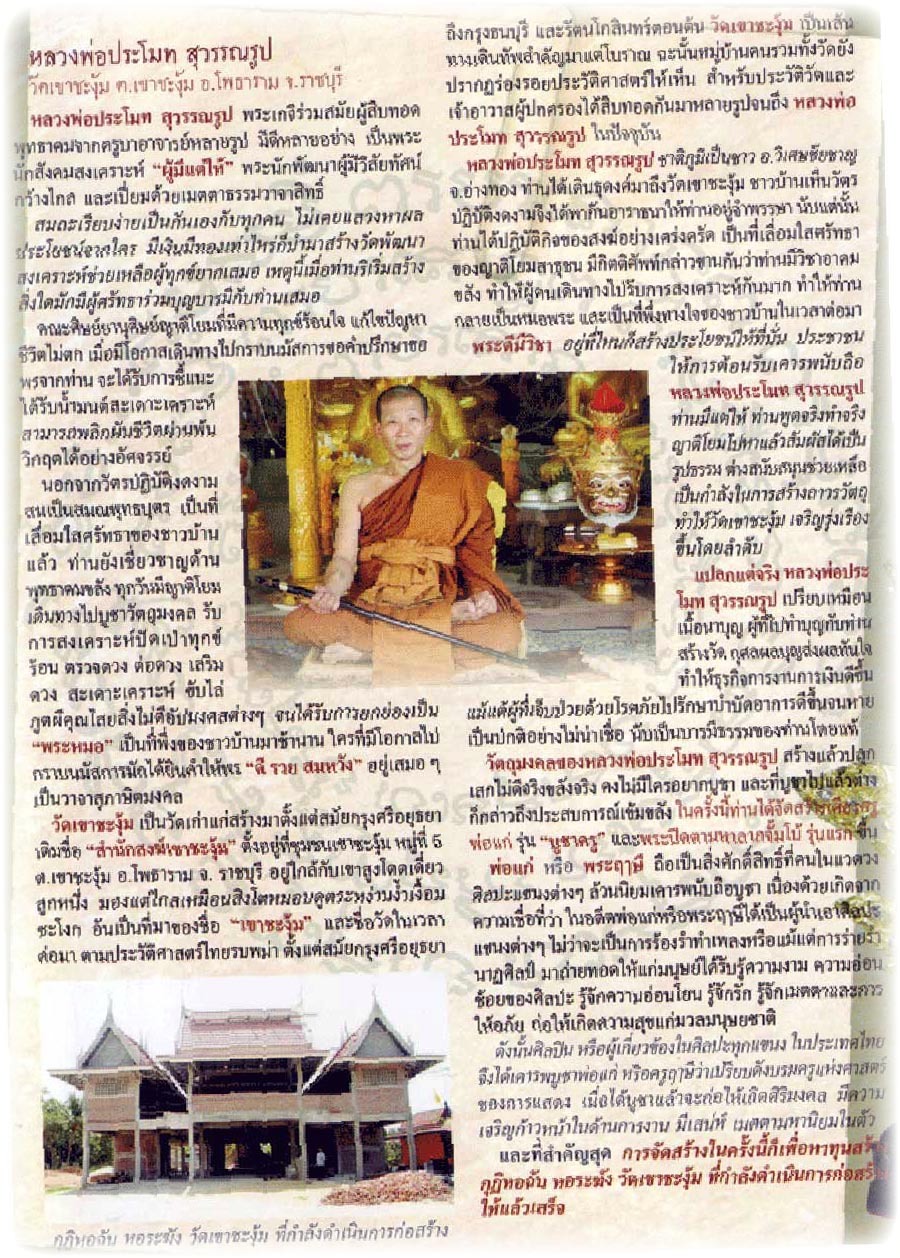 The preservation of the Dhamma and of Buddhism, is in part continued by the existence of Artifacts which prove what happened and the existence of Buddhism wherever it has come to arise. To collect and to maintain Sacred Images in Metallic form is thus, apart from serving one's own personal puproses, a way of preserving the Buddha, Dhamma, Sangha, and the Dtamra of the Kroo (Lersi) Teacher Sages of all Ages. There is Merit in preserving the Buddha Dhamma, so rejoice every time you are owning and taking care of a Bucha Image of this type during your lifetime. 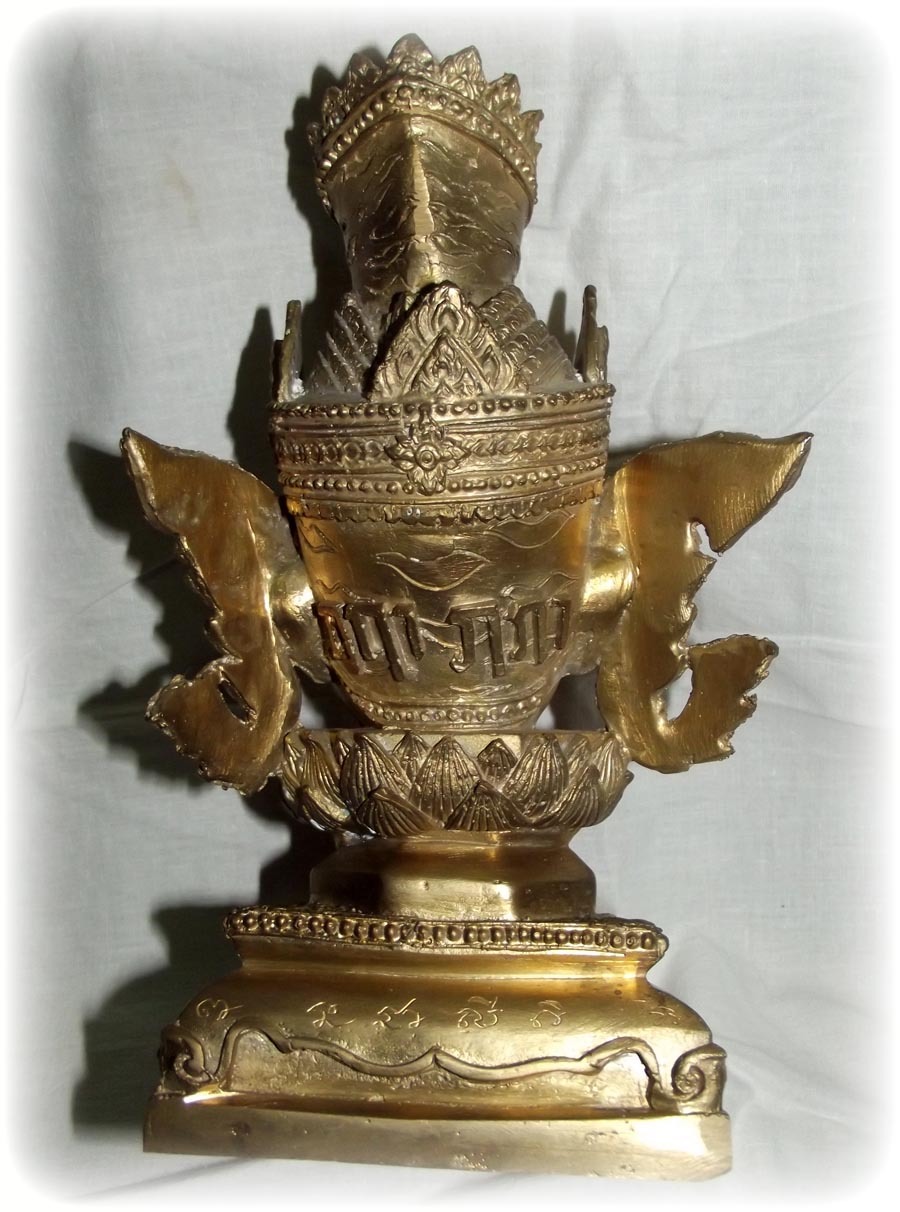 It requires somewhat more effort to practice revering the Ruesi, than to wear an amulet, because the practice of Revering Ruesi is a regular applied practice and you must think that the Ruesi are always with you, and that one lives and behaves as a Looksit of the Ruesi Boroma Kroo Por Gae. 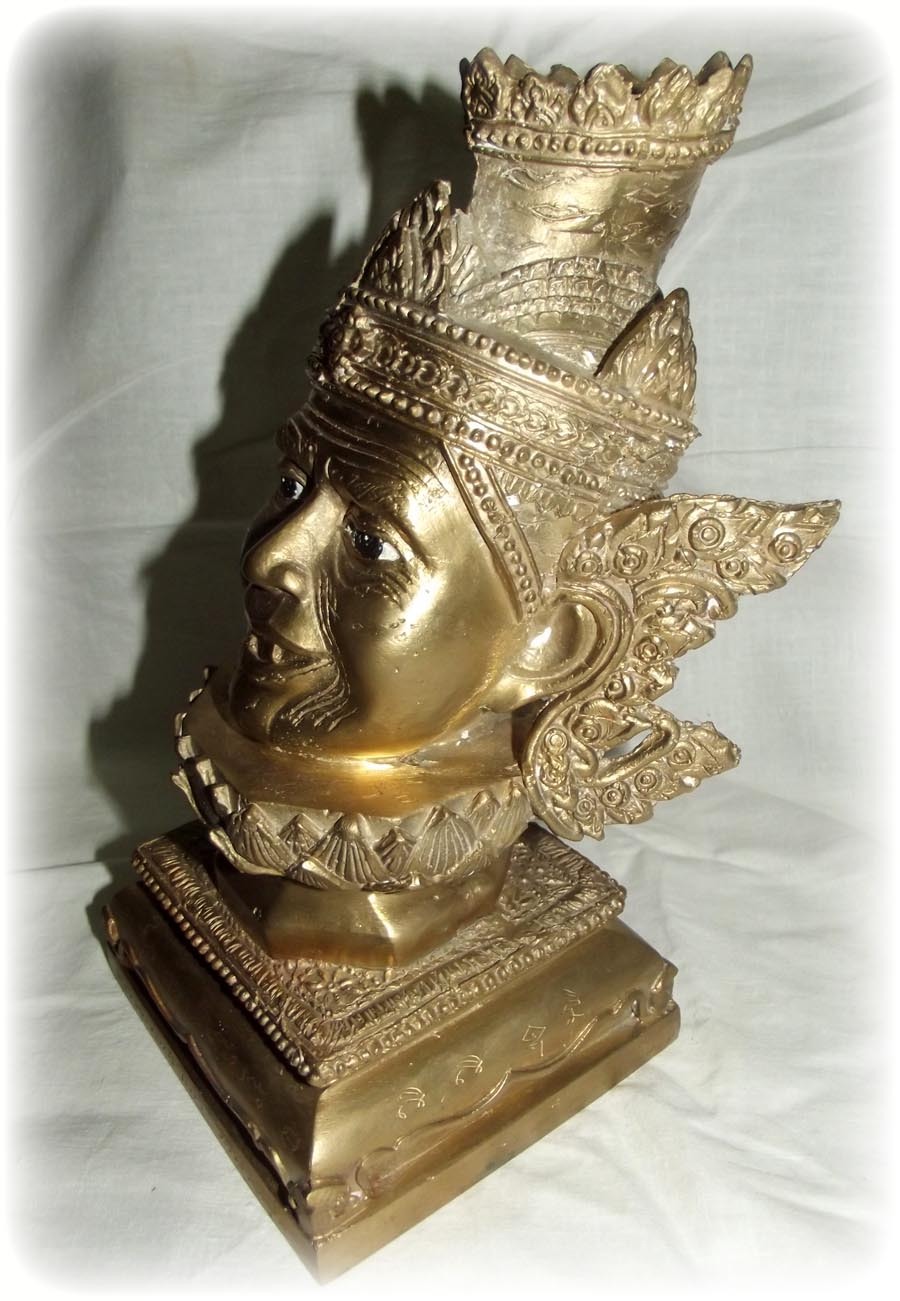 It is thus a practice of Bucha which must be kept to and maintained in proper Ritual Manner. the Ruesi Kroo Deities, are essential to have as Bucha Item for those who indeed themself practice Ruesi-Ism, Yoga, Meditation, Herbalism, Minerology, and magical Practices, such as Incantation or Amulet and Talisman making.

Meditation practitioners recieve extra blessings from the Ruesi, for Meditation is the primary practice of the Ruesi himself, and those who revere and practice the Science/Arts of Ruesi-ism, will attain great advancements in their meditations by studying and practicing the way of the Ruesi as a way of life.

5 types of fruits, a glass of water, 9 Incense sticks

If possible, Green Coconut (opened to drink), Banana (Nam Wa variety if possible) should be included in the 5 fruits. Do not use Star Fruit or Mangosteen.