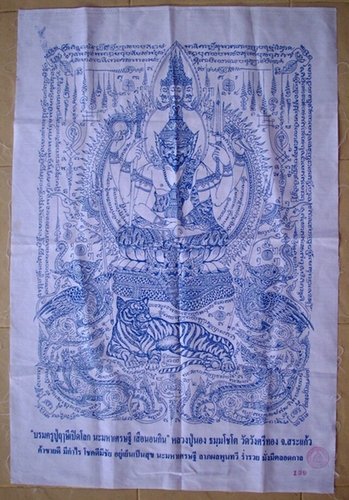 25 inches wide, and 36 inches high, this absolutely giant size Pha Yant is suitable for any Bucha altar from the small home shrine to the larger temple, or Ashram.

This Pha Yant us a powerful Bucha item for those who rever the Ruesi r practice Ruesi-Ism themself, as well as for shop owners and owners of Samnak Ruesi or Samnak Sak Yant/Ashrams. The Pha Yant serves as both a Bucha object, as well as to call people in to the establishment.

Great for high sales quotas in shops, for general Metta Mahaniyom and Choke Lap, and powerful for the altar to Bucha Ruesi in many magical aspects, including Amnaj and Gan Aathan (power and protection against magic), Klaew Klaad (evade accidents or other dangers), and Kong Grapan (invincibility, and life saving miracles) - Even Maha Sanaeh Charm and attraction is attained when devotion is truly given when making Bucha to the Ruesi Boroma Kroo and this Pha Yants other Deities