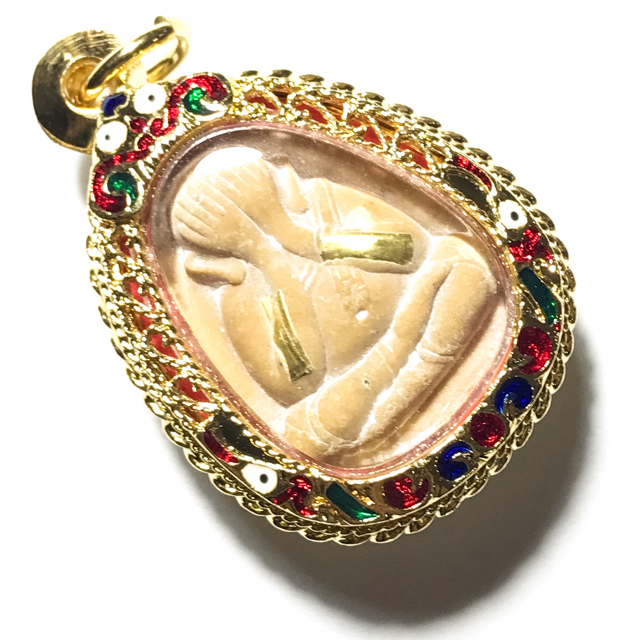 This particular model's substance is called 'Nuea Nam Man' because it has extra high quantity of sacred oil imbued within the Muan Sarn, which also pushes the finer Puttakun powders up to the surface of the amulet, leaving a white mildew on the surface, which is part of the visual attraction of this particular sacred substance. 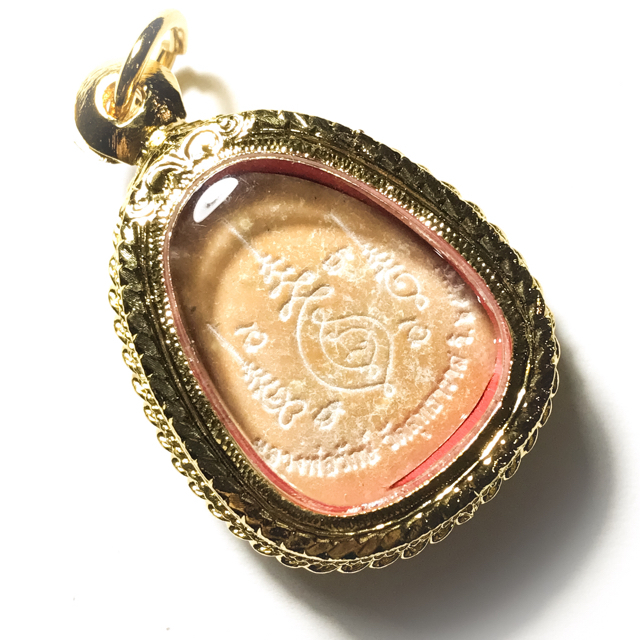 The Pra Pid Ta were released with other amulets in various models and Muan Sarn Sacred Powders, including a Darker Brown Pong Maha Sanaeh Maha Lap powder, and these Puttakun-Ittijae-Wan 108 powders. This model is a Pim Plod Nee Maha Lap Takrut Khaen, with Takrut in the arms, for reducing debts and increasing wealth and treasured possessions, preventing accumulated wealth from dissipating. 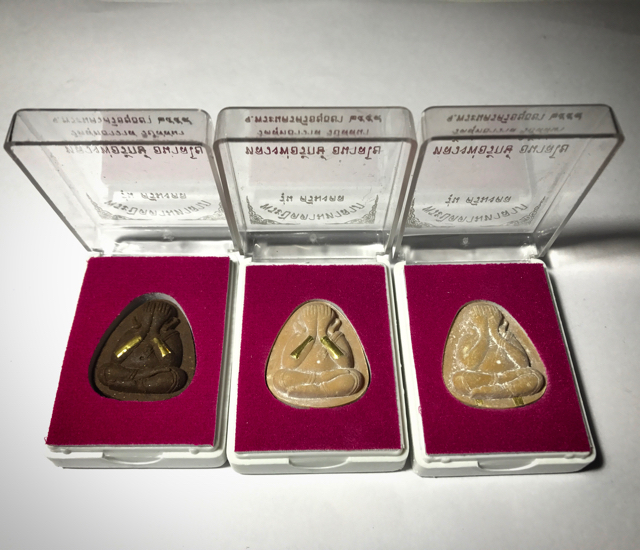 The front face features a Pra Pid Ta Plod Nee Nirodha Buddha image, styled in preservative fashion of the famous Pra Pid Ta of the Great Luang Phu To of Wat Pradoo Chimplee. Luang Por Raks is known for his inclination to preserve classic pre and post-modern era Buddhist Arts by preserving the designs of olden days, and the methods of creation and empowerment.

Funds from this Edition go to charitable development of Educational Facilities and to pay for the education, school books and uniforms of poor children in Ayuttaya, who cannot afford to go to school, as well as to finance the construction of a much needed Chedi Relic Stupa at the temple of Wat Sri Don Chai, in Payao Province.

The Wicha of the Pra Pid Ta Plod Nee amulet is known for its power to prevent the wearer from running out of money or resources, and to provide with a constant flow of cash, and worldly needs. It increases the flow of income and business, and the chances of a lucky windfall lottery win. In fact, the words 'Plod Nee' mean 'to liberate from poverty and debt', which is the purpose of this amulet, achieved through wealth attraction. 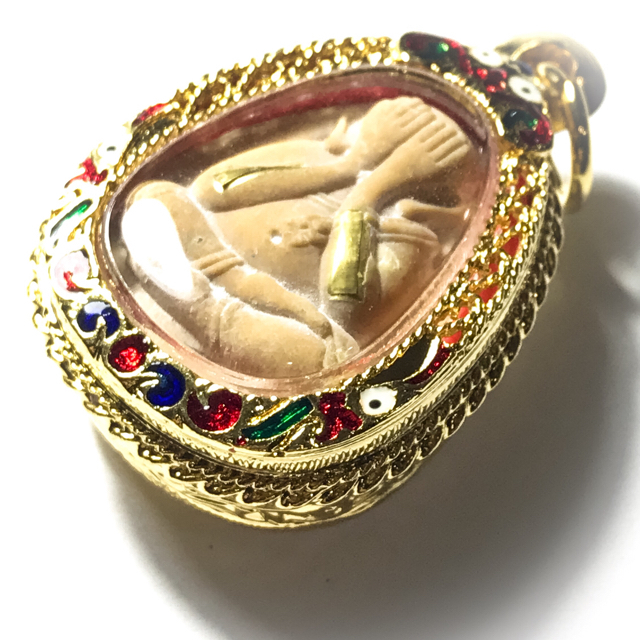 One of the lesser known powers of the Pra Pid Ta amulet however, is that of extinguishing suffering. The Pra Pid ta in fact composes a five limbed Yantra spell which represents a Buddha entering the state of Nirodha (extinguishing of all suffering), through the closing of his orifices and withdrawal from the world of Sensory Pleasures (and Pains).

Luang Por Raks Released the amulets in the 2559 BE Sri Mongkol edition, to raise funds to finance the Funding of the Construction of the Chedi Stupa at Wat Sri Don Chai, and to fund the education of poor children.

The amulets come with embellished gold plated stainless steel frames with coloured enamels, and transparent perspex windows on front and rear face, all included in the price. 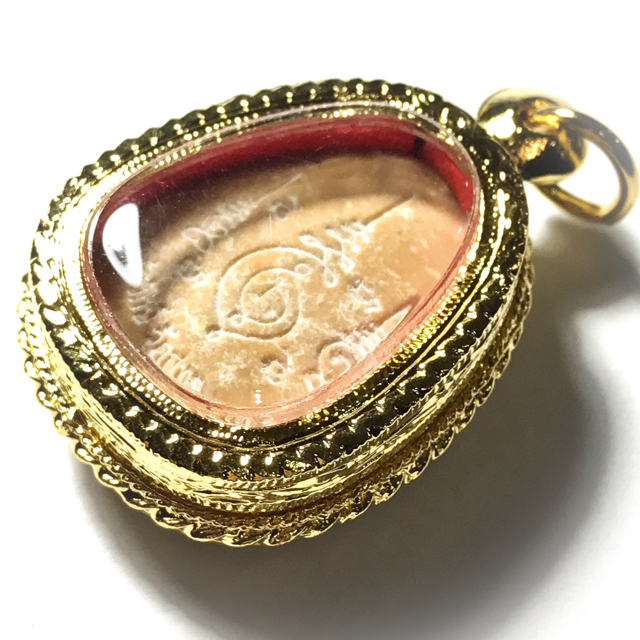 Luang Por Raks is Famous for his Immortal Saying 'Powerful or Not Powerful, depends on the Mind Itself". This means of course "The True Power, comes from the Mind, and From Faith".

He has managed to build up Buddhist Temples and Monuments and Charitable Projects, and revive interest in preservation of Thai Buddhist Niniature Arts and Sacred Amulets at the same time, by producing a great number of high quality and highly sacred editions of amulets, all of which are excellently designed and fashioned, and empowered with Great Monks of Purity in Important Blessing Ceremonies. 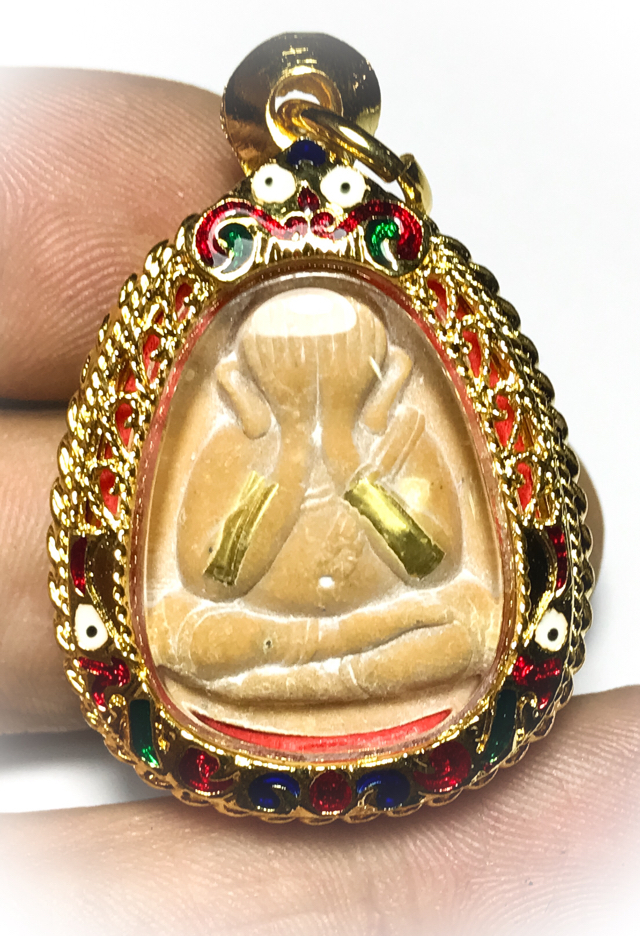 He has also meritoriously allowed himself to be called to empower and release editions for, and at other temples, to help the spread of Buddhism and preservation of the Faith. below you can enjoy just some of the pictures of his various editions in recent years;

Below; Rian Run Metta (Compassion Edition) 2559 BE Guru Monk Coin 'Roop Khai' oval design amulet - fine artisanry from the same comittee of artisans of the temple of Luang Por Koon, who made the famous 'Rian Metta Luang Por Koon' Millionaire Class amulet - a classic high quality Guru Monk coin with a long future ahead of it, from Luang Por Raks. 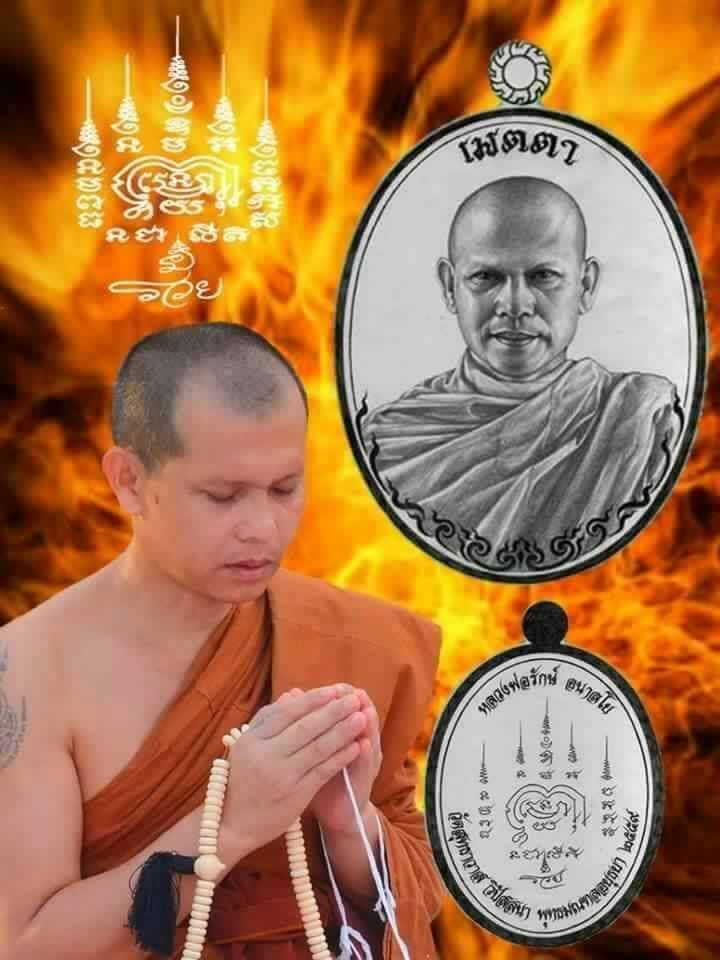 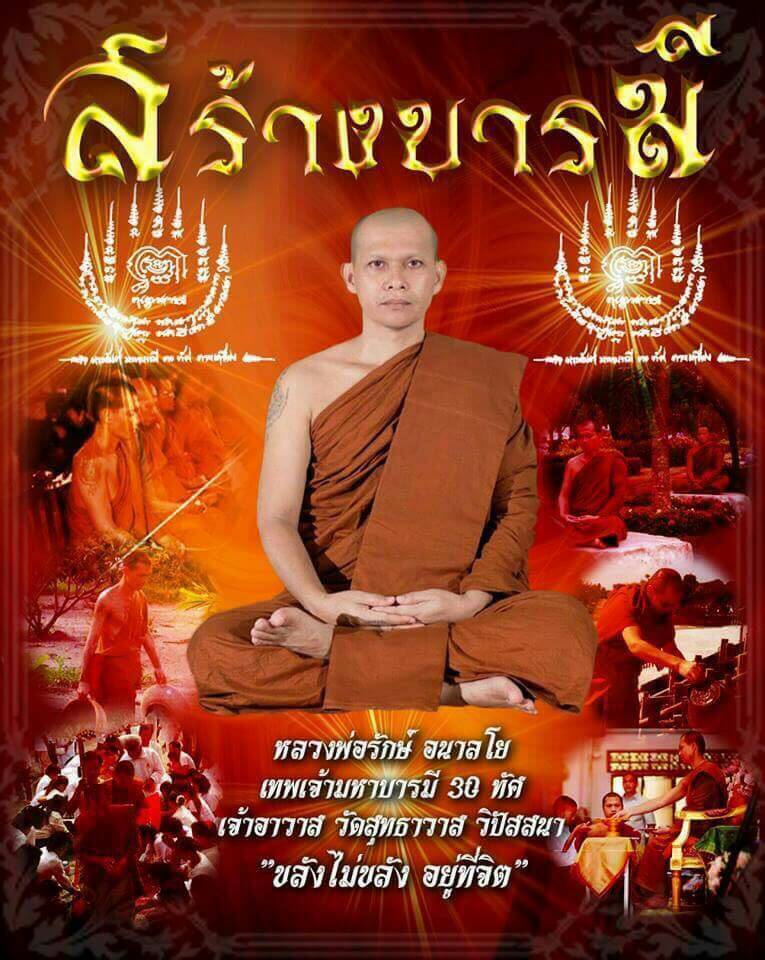 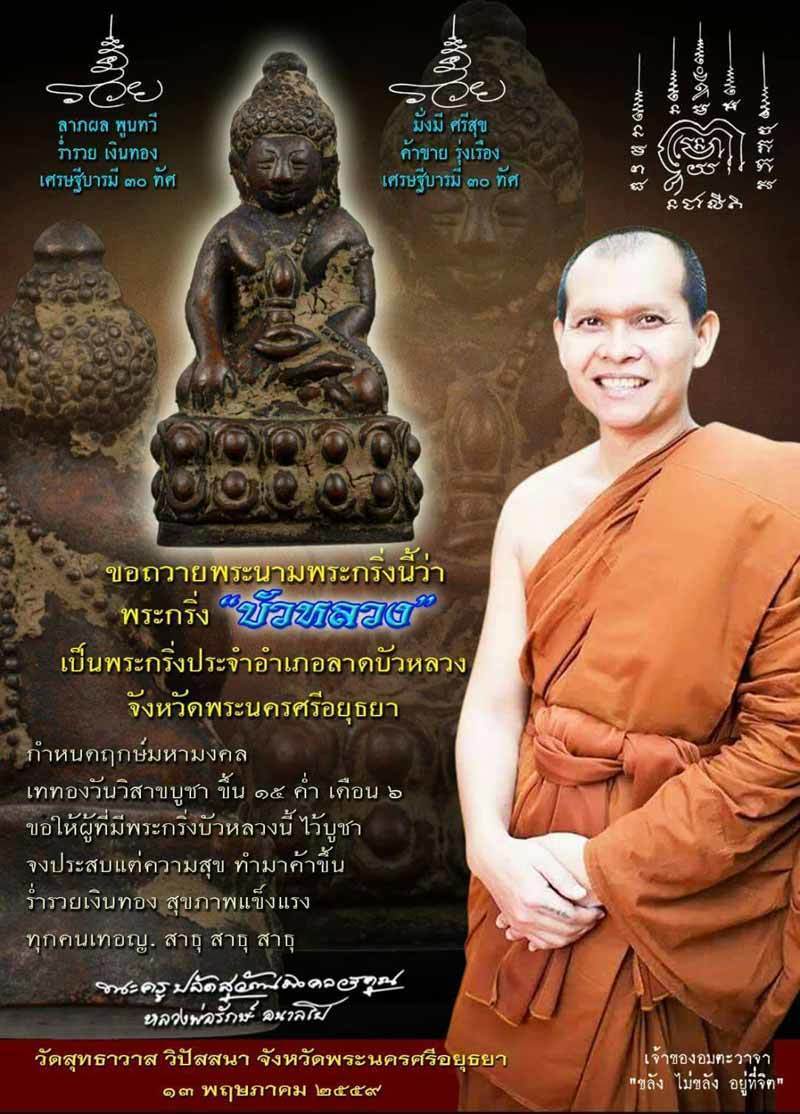 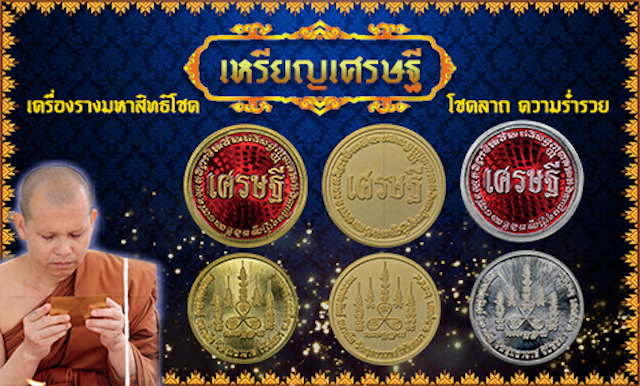 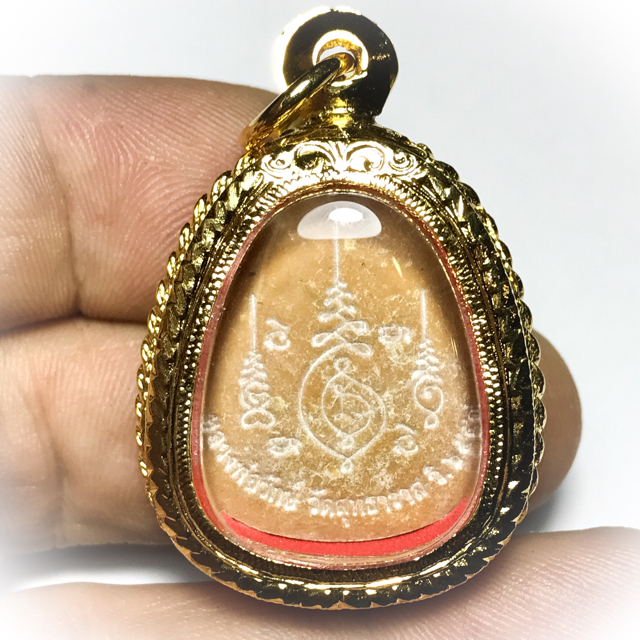 So many of Luang Por Raks' amulet editions have received great attention and many cases of positive experience with his amulets, has caused Luang Por Raks amulets to become some of the Most Prized Classic Buddhist Amulets of the present day, and more so in the Future. The amulets of Luang Por Raks are of excellent quality Sacred Muan Sarn, High Class design of miniature Buddhist Art, and powerful empowerment from a monk of high purity. 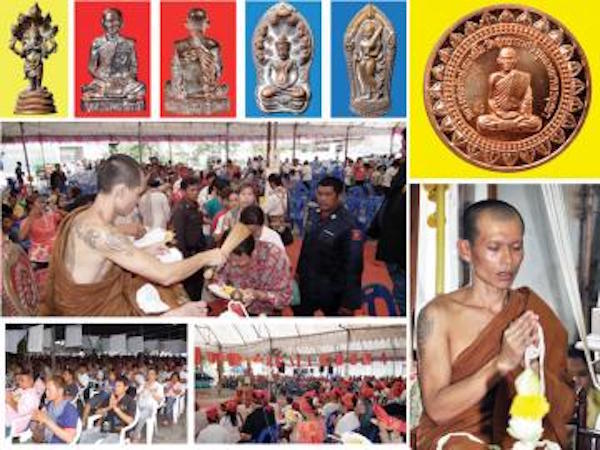 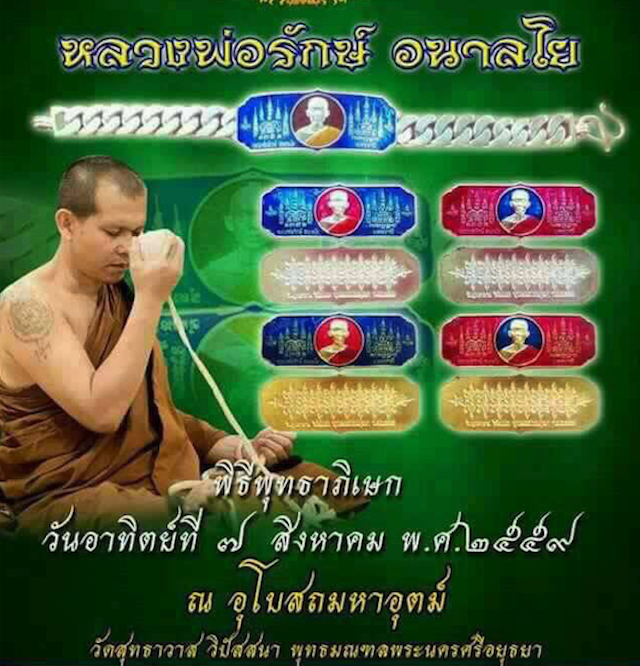 Above; 2559 BE Edition Guru Monk Bracelets in Sacred Metals with Precious Metals and Rachawadee Enamels - yet another edition raising funds for the many charitable causes of Luang Por Raks for the Year 2559 BE - His Merits and Achievements are immense and widespread. 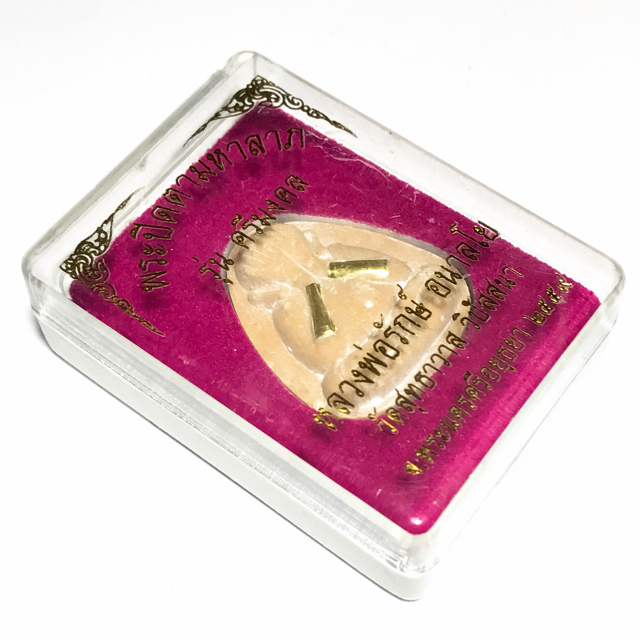 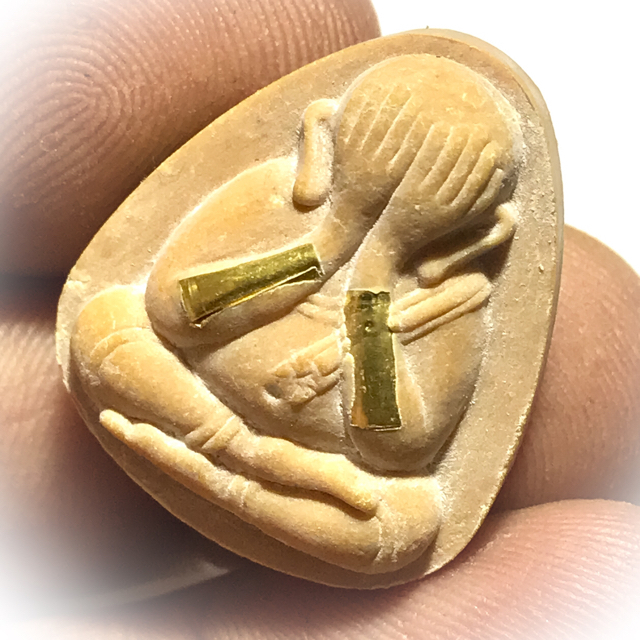 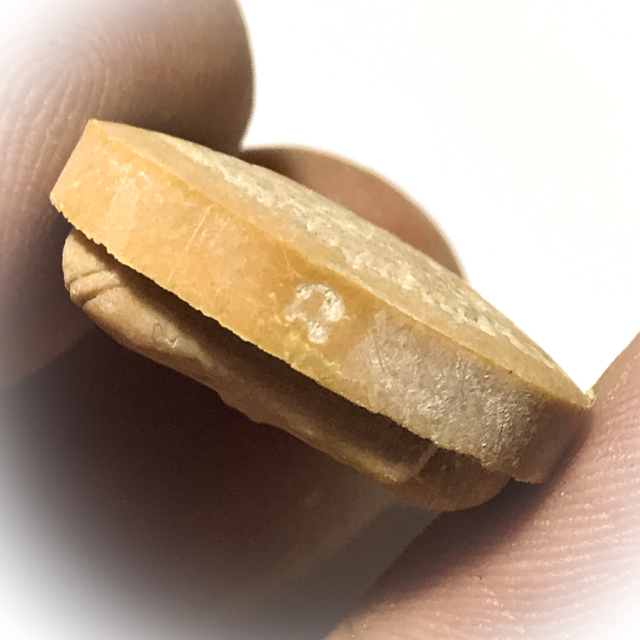 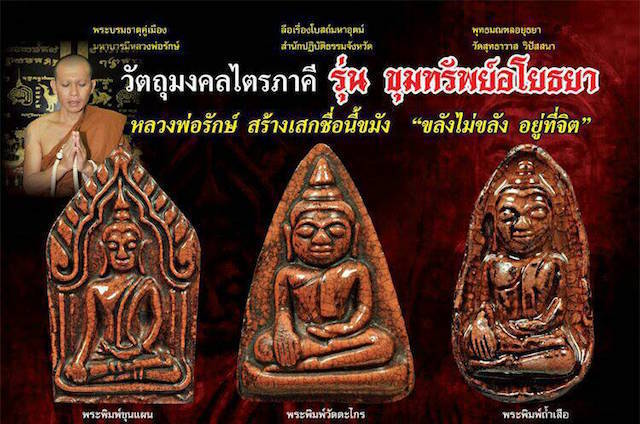 Origins of the Pra Pid Ta

Pra Pid Ta amulets, as well as Pra Pid Ta in form of Pha Yant, and Bucha statues, have been produced as objects of reverence and protection since very ancient times in Thailand. The artisans of that time created various styles and interpretations using the various periodic influences of Buddhist art and sculpture available at the time. Varios Deity forms were used to make the Pid ta posture (‘Pid Ta’ means ‘covering the eyes’) – various Buddhas or Bodhisattvas or Deities are fashioned into the posture of Pra Pid ta, or Pid Tawarn (meaning ‘closing the orifices). Pid Tawarn can close 7, or 9 orifices (seven being called ‘Pra Pid Sadtatawarn’ and nine being called ‘Pra Pid Navatawarn’).

The Pra Pid Ta is considered to be an amulet with ‘Maha Ud’ and ‘Kong Grapan’ power (invincibility and gunstopping power), but is also made as a wealth bringer, in which case, the amulet will be called ‘Pra Pid ta Maha Lap’. In order to inflect a greater resonance for wealth attraction and auspicious blessings, in addition to the Maha Ud and Kong Grapan magic, ancient artisans sometimes would use the image of the Sangkajjaiyana Buddha of riches and happiness, and carve it in the Pid Ta posture. The Pid Ta amulet is one of the most popular of Thai amulets, and has been made by so very many temples and masters from all Provinces, that it is now classed as an important member of the Benjapakee family of classic top five types of Thai amulets. 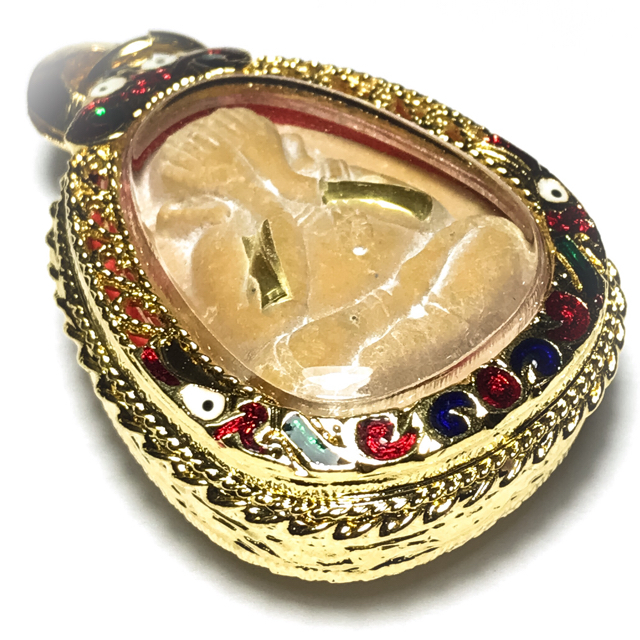 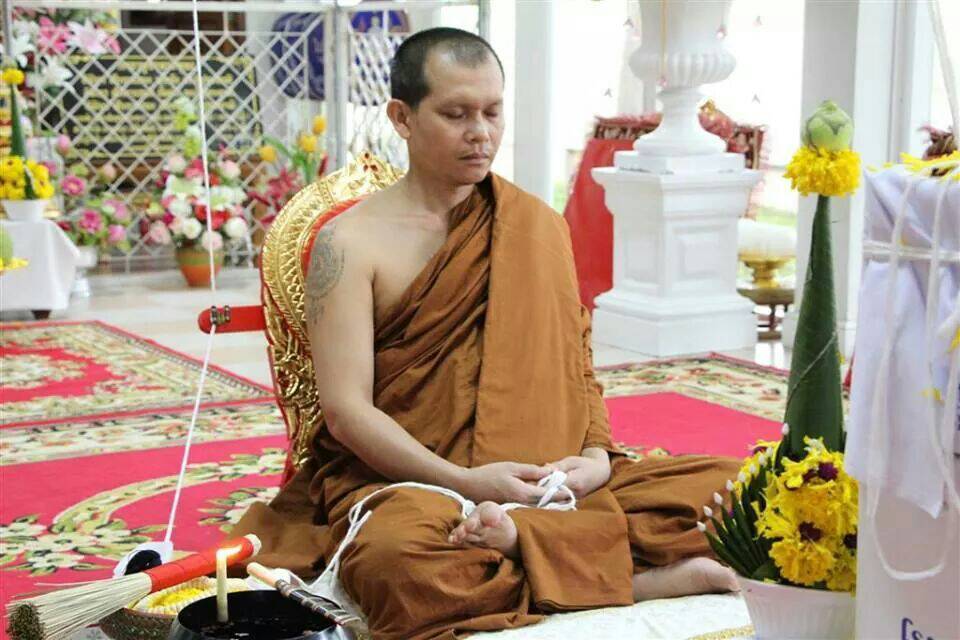 Luang Por Raks was fortunate and meritorious enough to have received many Wicha from a large number of the Great Masters of our Time, and the Previous Generation, including having received the Hlek Jarn (inscription tool for Magic) from each Master hwho bestowed Wicha upon him, including;

2. Luang Phu Yuea, of Wat Mai Ya Sai, bestowed Wicha upon Luang Por Raks, but little is known of which spells he learned with this Master.

3. Luang Por Perm, of Wat Bom Gaew, a powerful Monk most often invited to dozens of ceremonies each year to assist in empowering amulets, bestowed his Wicha of Empowerment to Luang Por Raks 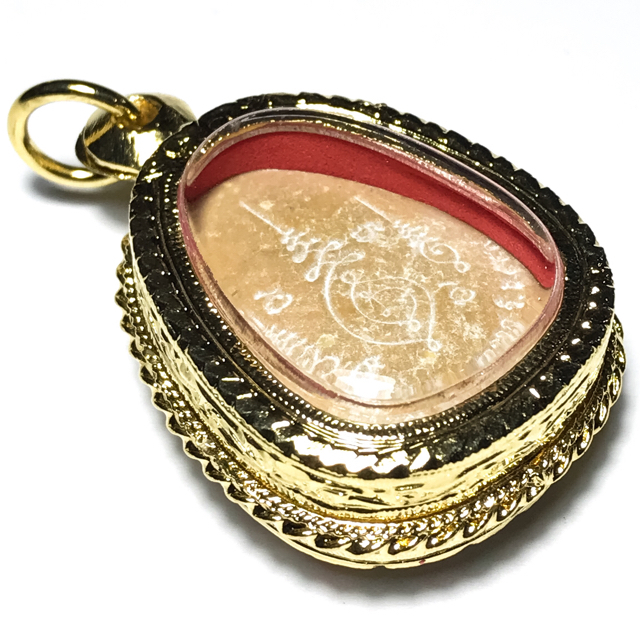 7. Luang Phu Hongs of Wat Petchburi (Sussaan Tung Mon) om Surin, revealed and bestowed the Wicha PLuk sek wadthumongkol method of empowering amulets with Incantation, invocation of Powers and Evocation of Kata Akom, by teaching him to develop and use 'Palang Jidt' Psychic Powers for empowerment. Many masters rely solely on the powers of Deities and Elementals, who are called upon with Incantations, to empower amulets. But Luang Por Raks, is a Master who believes in the Power of the Mind itself to emit psychic abilities. When Incantation and applied Psychic Power are used in conjunction, one can consider the result to be a truly well empowered amulet. 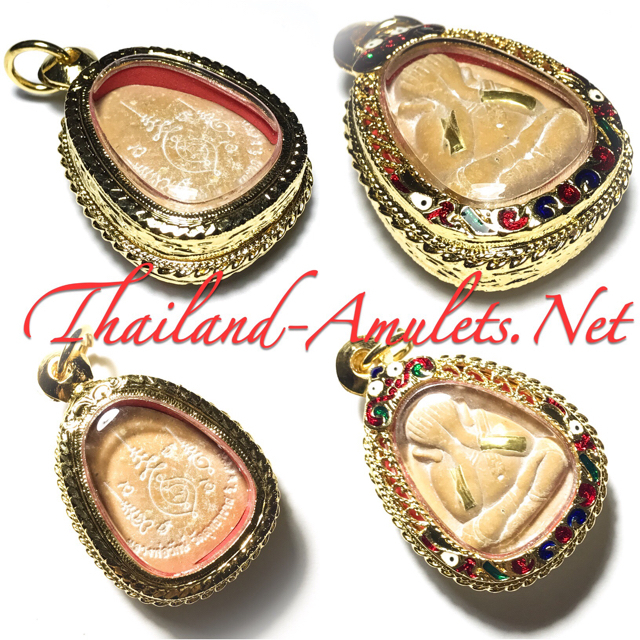