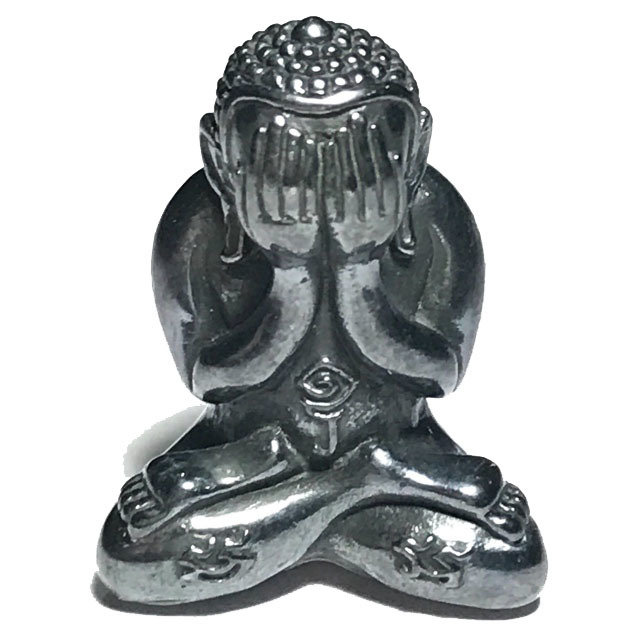 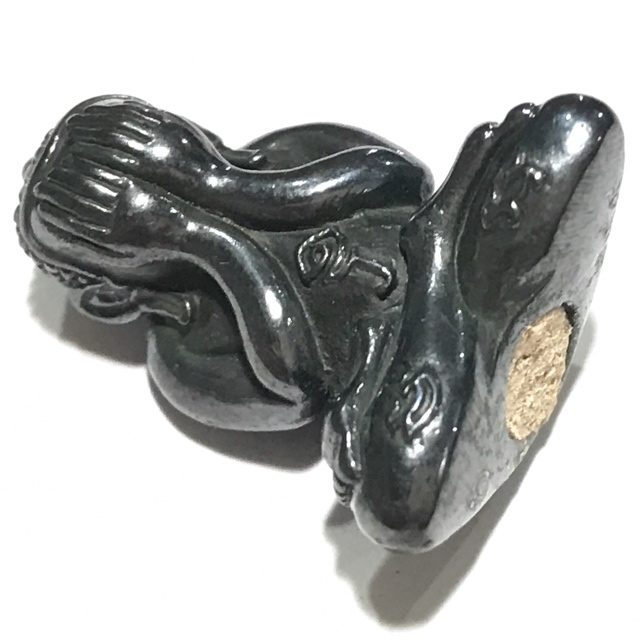 The base of the Pra Pidta is filled with Muan Sarn Sacred Powders of Luang Phu Suang (Ud Pong Luang Phu Suang), to imbue the power of the Magical Lineage of the great Master Luang Phu Suang who is said to have lived for 500 Years. This edition is especially powerful for having received three separate blessing ceremonies fro three Great Master Monks of the Current Era, Luang Por Put (Abbot of Wat Prai Pattana), Luang Phu Saen Bpassano of Wat Ban Nong Jig, and the Legendary Luang Phu Ta Analayo of Wat Pha Totsapon Manghalaram in Roi Et.

The amulets were passed to all three masters at their respective temples, to receive empowerment and blessings in solo meditative empowerment. The first empowerment was on 5th December 2560 BE (King Rama 9's Birthday and Father's day), at Wat Prai Pattana in Sri Saket. 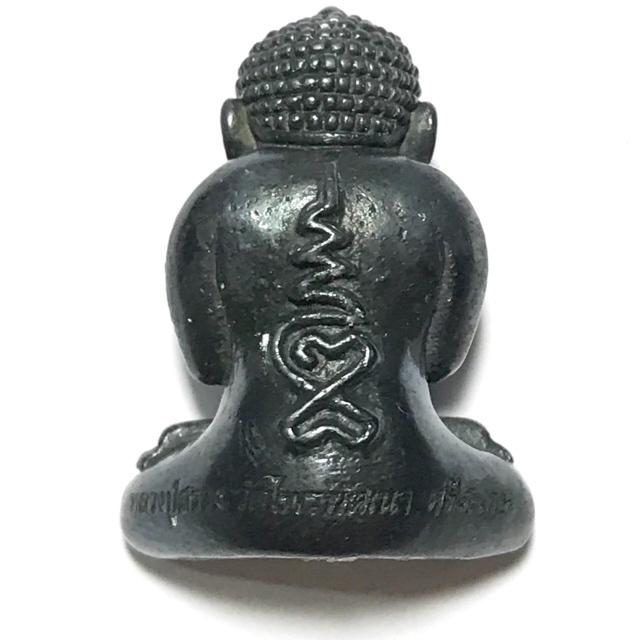 Nuea Maekasit, is one of two similar Ancient Alchemical Alloys used for Sorcery, the other being 'Nuea Maekapat'. Nuea Maekasit is obtained by Alchemically smelting Iron Artifacts, with Mercury and sometimes Lek Lai (Lek Nam Pi), as the main base Magical ingredient, and performing Elemental Invocations until the structure of the metal changes, and becomes a sacred Metal of Alchemical Nature. Alchemy and Metallurgy are combined here as one facet of the various aspects of empowerment of the amulet. 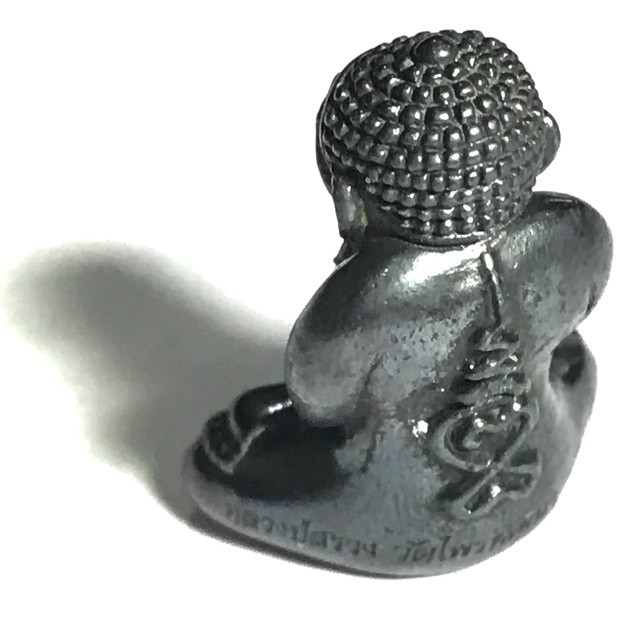 The Maekasit and Maekapat Sacred Alchemical Metals are not only especially apt for channelling Magical Forces, but also is a preferred substance for aesthetic reasons; Namely, that the surface of Nuea Maekasit, when boiled and transformed Alchemically into its final state, takes on various appearances, such as bluebottle two tone color, or black-green beetle-wing color, or even a reddish-black fiery tone, when bronze, copper or gold is included in the admixture. If you place the metal in water, it changes color tone, and also with passage of time, the color and textures of the metal change color. It has the reputation of being able to 'Hnun Duang Chadtaa' (improve Karma and Horoscope, Luck, Fortune, Destiny and Fate). It is also reputed to be able to forewarn of Dangers or Enemies. As a sacred metal for the Creation of Sacred Amulets. 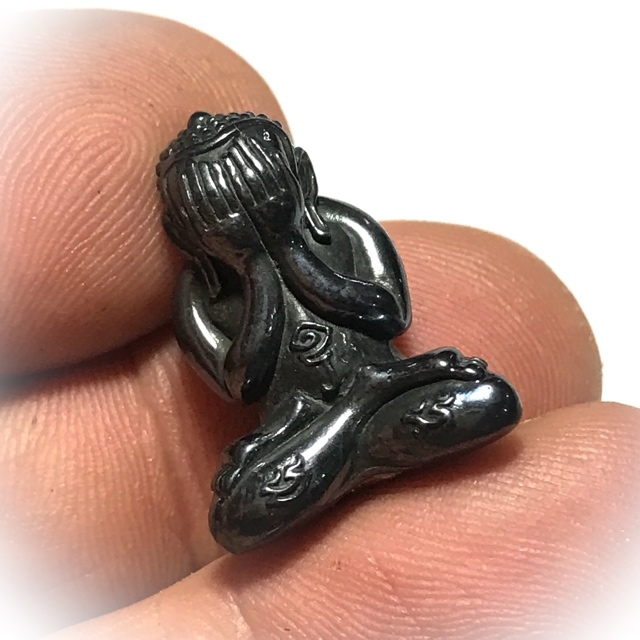 The second empowerment ceremony was performed the same day at Wat Nong Jik with Luang Phu Saen performing Blessings.. The amulets were then transported from Sri saket to the temple of Luang Phu Ta Analayo for Luang Phu Ta to empower, finalising the empowerments on the very same auspiciously chosen day. Although the Pra Pidta has always been a popular amulet with men, this small size Pidta (2.2 x 1.5 Cm), is also a perfect recommendation for ladies or children to wear with purely Buddhist Blessings, and the Invocations of the Lineage of Luang Phu Suang, Kroo Ba Ajarn of the temple of Wat Prai Pattana. Luang Phu Suangs amulets are said to have the following properties; Make a week of reverence, and receive the power of Metta Mahaniyom. Make 2 weeks reverence, and receive the power of Choke Laap, bringing good sales , wealth and fortune. Make three weeks of reverence, to see the magical power of Siang Choke, bringing luck in all forms of gambling and lotteries, if revered with true and complete faith for the whole three weeks, then any gambles will be successful 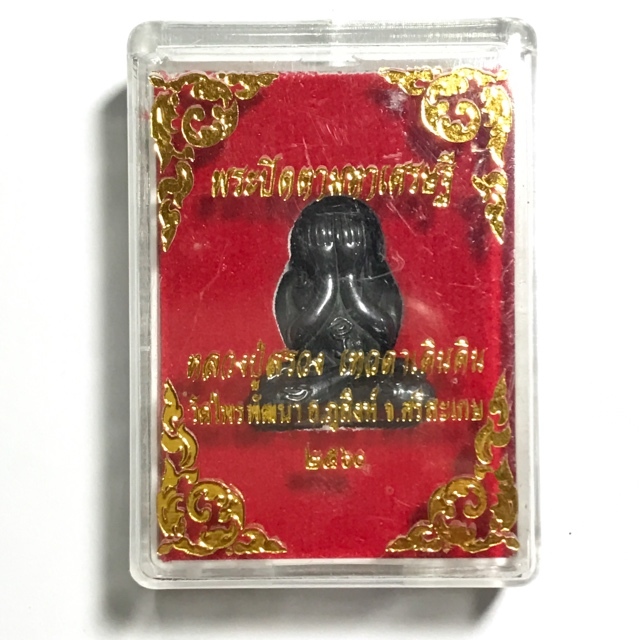 Kata Pra Kawambadee (This kata is for increasing ones wealth and belongings and good fortune);

The Pra Pid Ta is considered to be an amulet with ‘Maha Ud’ and ‘Kong Grapan’ power (invincibility and gun stopping power), but is also made as a wealth bringer, in which case, the amulet will be called ‘Pra Pid Ta Maha Lap’. In order to inflect a greater resonance for wealth attraction and auspicious blessings, in addition to the Maha Ud and Kong Grapan magic, ancient artisans sometimes would use the image of the Sangkajjaiyana Buddha of riches and happiness, and carve it in the Pid Ta posture. 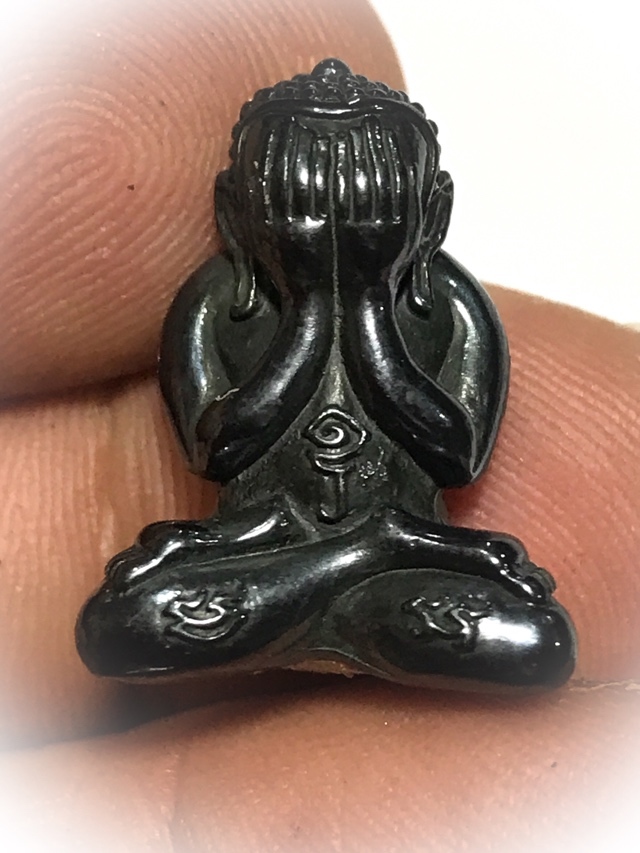 The Pid Ta amulet is one of the most popular of Thai amulets, and has been made by so very many temples and masters from all Provinces, that it is now classed as as having its own 'Benjapakee' family of classic top five types of Thai Pidta amulets. 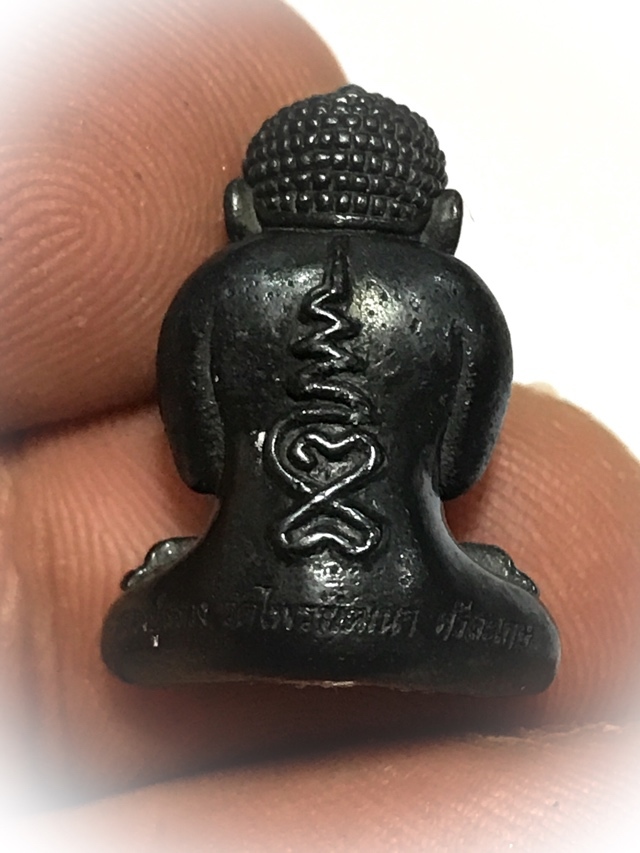 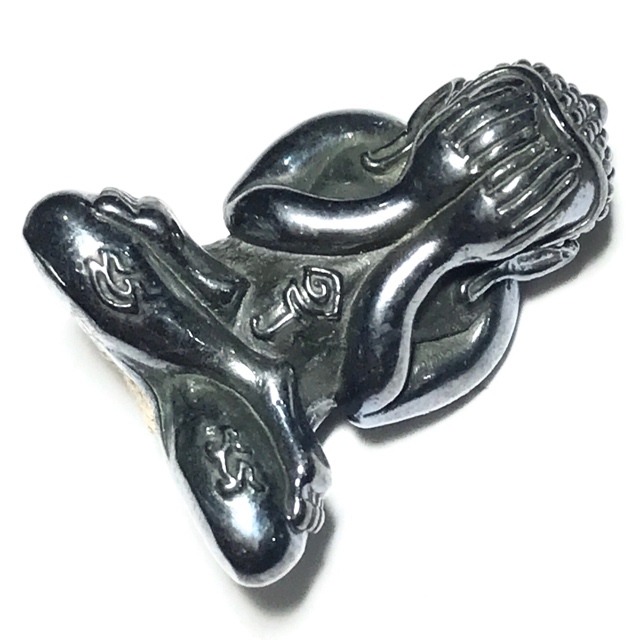 Amulets by Lp Suang Luang Phu Suangs amulets are said to have the following properties; Make a week of reverence, and receive the power of Metta Mahaniyom. Make 2 weeks reverence, and receive the power of Choke Lap, bringing good sales , wealth and fortune. Make three weeks of reverence, to see the magical power of Siang Choke, bringing luck in all forms of gambling and lotteries, if revered with true and complete faith for the whole three weeks, then any gambles will be successful 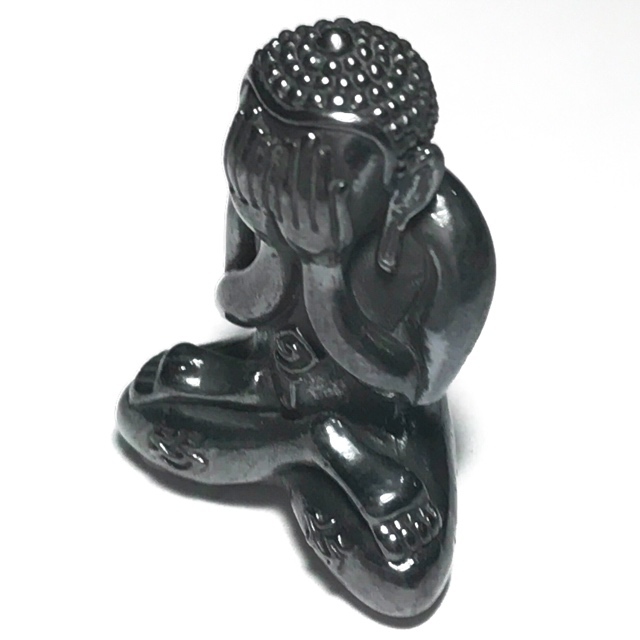 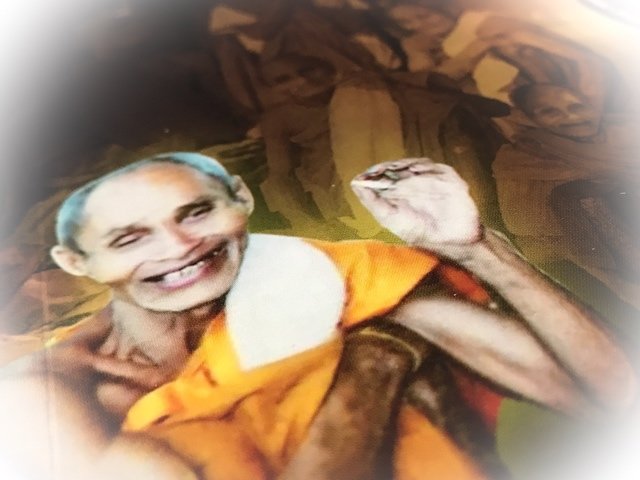 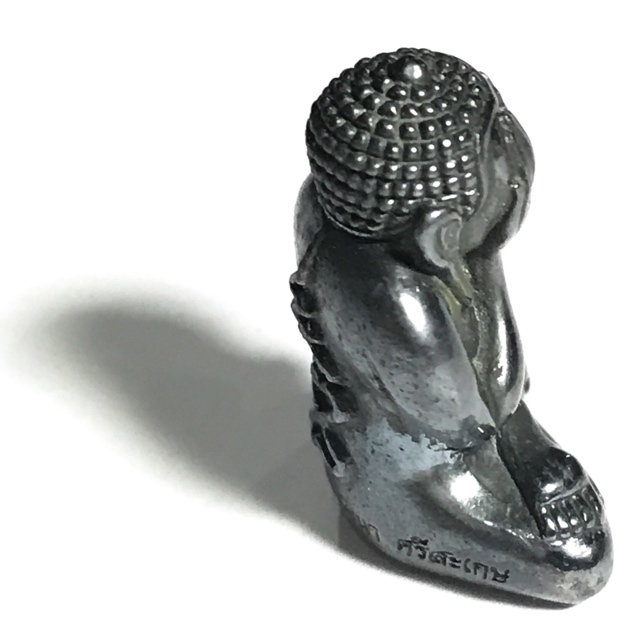 Protection from road accidents – the wearer of this amulet will not ‘Dtaay Hong’ (die in a terrible accident). In times of difficulty, be it financial or otherwise, you can revere the amulet and ask Luang Phu Suang to help you in your endeavors. Many people believe their success to be due to their prayers to Luang Phu Suang being answered Kong Grapan Chadtri protective magic is present in a high degree in all amulets from LP Suang. There are many tales of life saving miracles occurring where Luang Phus amulets were worn. Protection from black magic, ghosts, fairies and local spirits. Serm Duang (improve fate and karma – auspicious improvement of ones horoscope). Protection against lightning and fire damage. 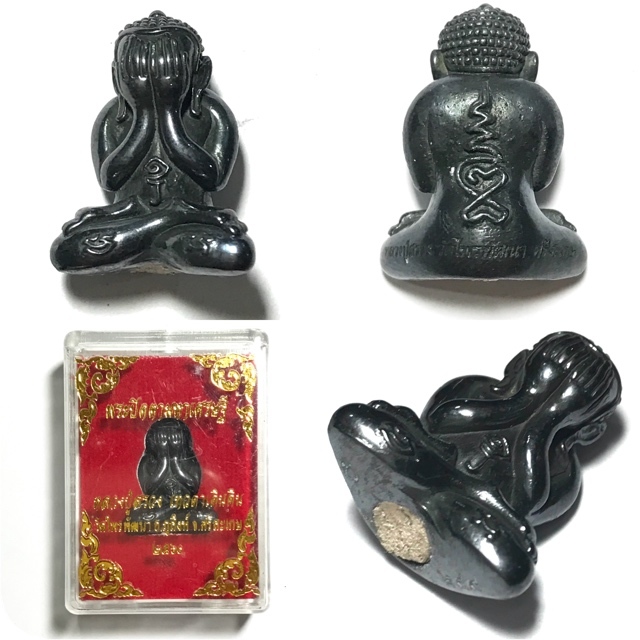