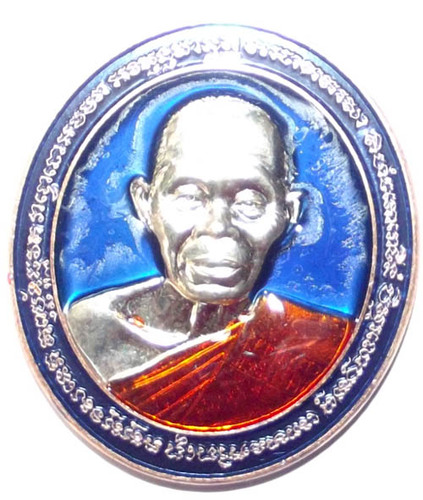 Sacred Guru Monk Buddhist amulet made in the image of Luang Por Koon Purisutto, of Wat Ban Rai temple in Nakorn Rachasima. Commissioned from the abbot of the temple of Wat Traimidtr in Bangkok. Jao Khun Tong Chai (Pra Taep Bhavana Vikrom), The abbot of Wat Dtraimidtr temple, has beseeched and commissioned the permission Luang Por Koon, To create and release this series of high-quality Buddhist amulets in the image of Luang Por Koon, with a sacred yantra on the rear face of the coin.

'Rian Kanajarn' (Magic Monk coin amulets of highly Collectible status) which are beginning to become ever more sought after, as their value and Difficulty to forge Or fake Is becoming ever more clearer to the collector. 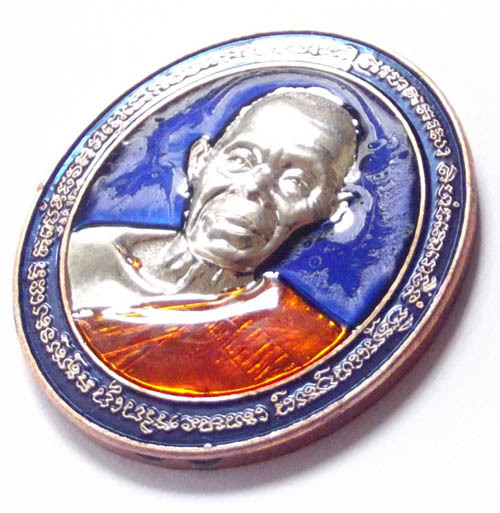 This series of Amulets shows very accurate laser engraved and machine embossed codes.  This is part of what makes this particular series inimitable difficult for forgeries to be made for the high expense of the machinery needed.

The making of this particular series and the measures taken to prevent any possible forgeries is part all of the current war against forgery, which has been assaulting the amulet trade, Especially since the massive increase in popularity and collectorship of Thai Buddhist amulet

Jao Khun Tong Chai of Wat Dtraimidtr Has learned many forms of Sorcery, from various great masters of history, including Luang Por Kasem Khemago of the Samnak Songk Sussaan Dtrailaks, in Lampang (Considered to be an Arahant), Luang Por Buddhadhassa Bhilkhu of Wat Suan Mokkh in Surat, Luang Por Buddha, Luang Phu Tim of Wat Laharn Rai, and most of all under Luang Por Koon. He ha made Many different series of amulets in his own at his temple most notably for his making all of the rian ro ha song yin dee Rama five amulet, And various series of Pra Kring Buddha statuettes. 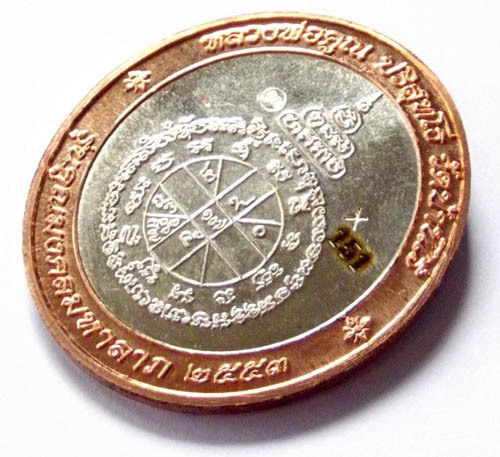 A sacred Serm Duang Chadtaa Yantra is embossed for improving karma and Lucky Fortunes and to Protect and Nourish with Prosperity. Special codes for authenticity (anti forgery) are embossed on the rear face of the amulets. The fact that this has been done using special machinery such as the laser engraving makes this a very difficult for forgers to be able to imitate this kind of amulet. 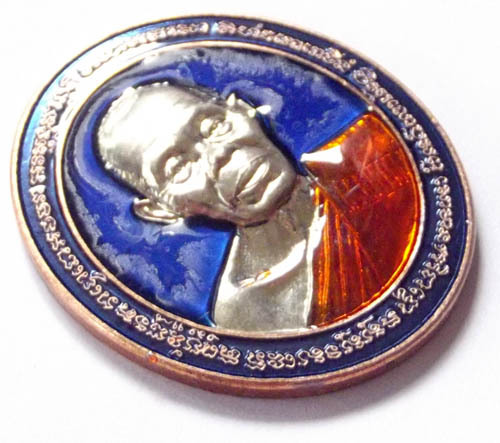 This model is in Nuea Albaca with 'Khorp Nuea Nak' (Pink Gold Alloy) outer rim with Ya Rachawadee Enamels in Blue with saffron robe. A large array of different models were made in this series. This series is the most popular of all post 2538 edition Luang Por Koon coins. 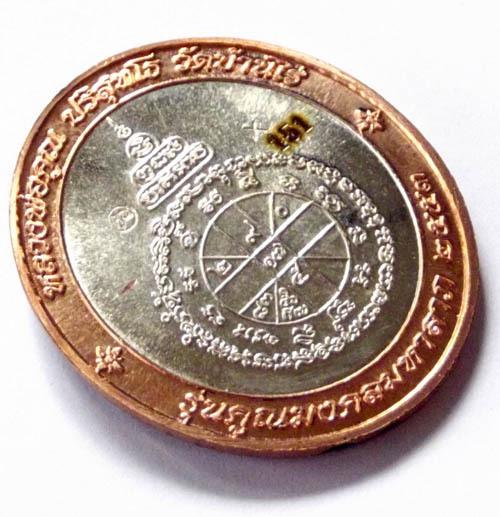 Magic Monk coin amulets of highly Collectible status are beginning to become ever more sought after, as their value and Difficulty to forge Or fake Is becoming ever more clearer to the collector.

This has revived fervent Interest in the eyes all the high-end professional Buddhist coin collector, and also the devotees, who have been victimized so often, with the many fake coins in the image of Luang Por Koon. 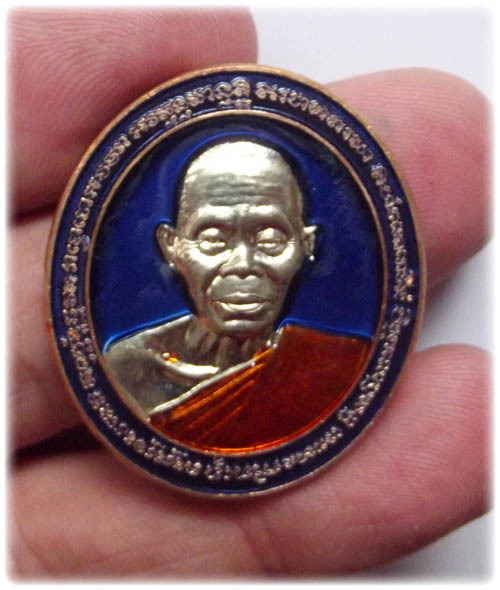 Although it is true to say that Luang Por Koon monk coins Became ever less in demand after the years 2537 - 2538 Buddhist Era. In the last few years the amulets of this great guru Master Monk have returned to public favor and have started to become snapped up like gold nuggets by devotees again. This edition is one of the more popular and accepted editions of amulets from the later releases which were blessed by this great monk.

The first Buddha Abhiseka was performed on the 29th December 2553 BE, at Wat Ban Rai (temple of LP Koon). Luang Por Koon performed Solo Empowerment with his Jhanic Skills and imbuing his Purity with the sending of Metta.

The second Buddha Abhiseka was performed on the 21st of February 2554 BE in the Uposadha shrine room of Wat Dtraimidtr Vidhyaram in Bangkok, with Pra Prohme Weti, the Abbot of Wat Dtraimidtr incending the Victory Candle.  Two notable names present to assist with empowerment were Kroo ba Aryachat and the Great Luang Por Raks of Wat Sutawat Vipassana in Ayuttaya.

Apart from from their sacred value, another reason for this is the fact that the coins are made with many marks of authenticity and coding. The period of less popularity for amulets by this monk has now ended and these releases are gaining very hi gh status with the serious and professional collector. 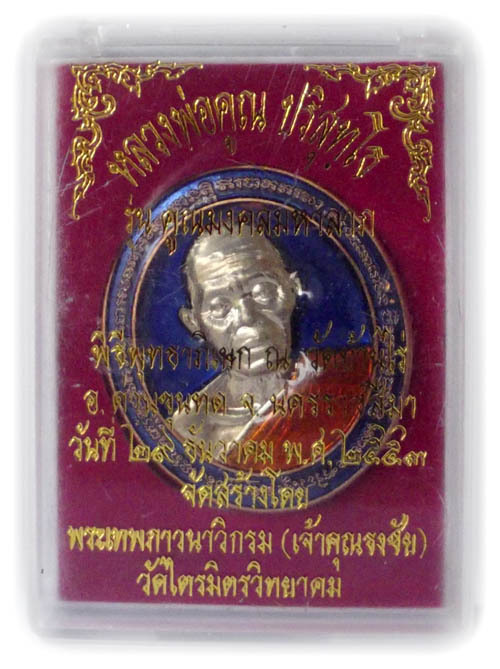 Comes with original box from the temple

The drop in popularity after 2538 BE, was due to the fact that too much over production was being made and this caused the amulets to become less valued for they became too common.

This edition has been called a Historic Edition in the fight against forgery, for its high grade manufacture and Sacred Muan Sarn of High Quality that would make a forgery too expensive, und hence, unsellable at a cheaper price. 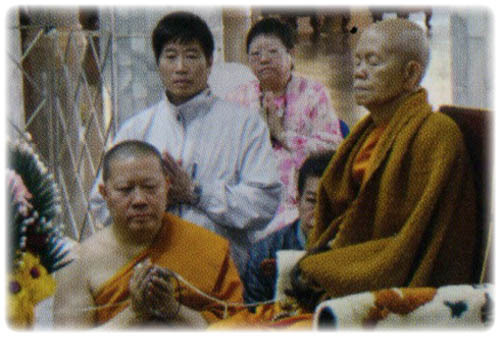 This latest series of sacred amulets though are very different in this sense each amulet has its own individual code and is recognizable easily for its high-quality. One would have to invest a large sum of money just for the machinery, to be able to produce a professional and high-quality Buddhist amulet of this variety as a forgery. Amulets that are difficult to forge, are the ones which become the most favored. 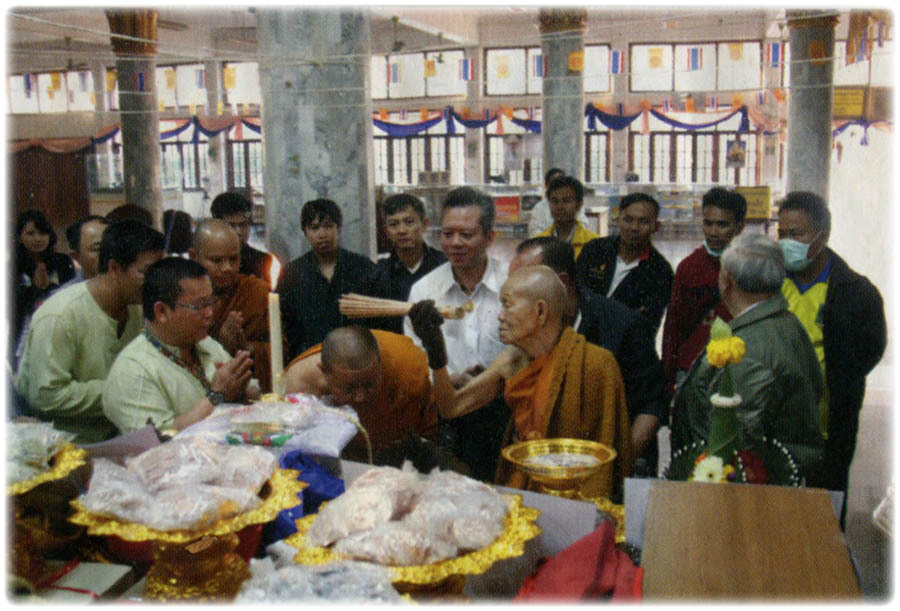 This is a very important factor in what makes an amulet have a short life of popularity or a long standing status over many decades this is a recommended Guru Monk cin in the image of a possible Arahant. A most recommendable amulet in our opinion, which can only gain in sacred as well as monetary value.