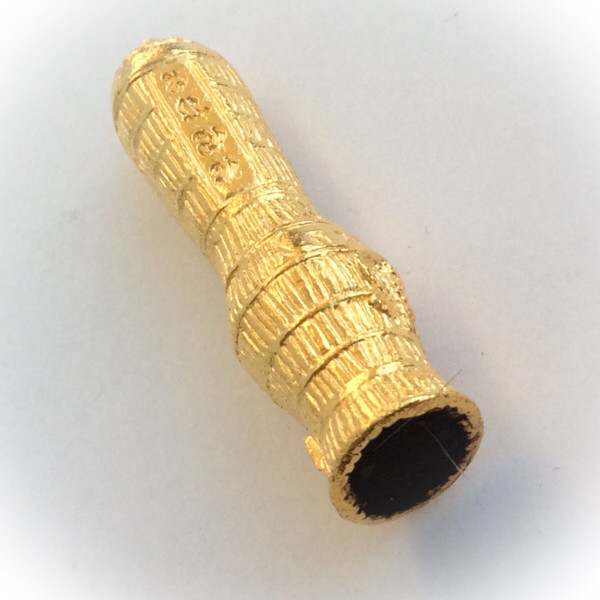 Sai Dood Sap  Nuea Loha Chup Tong Kam (Sacred Iron with Gold Plating) - Special Gammagarn version - Blessed and released in Buddha Abhiseka in the Year 2553 BE by Luang Phu Bpun Tammabalo of Wat Ban Sangk in Roi Et. This is one of a number of different versions in varied sacred metal alloys which were released in limited edition Gammagarn series.

The Amulet is made from Albaca, a Sacred Silver Alchemical Alloy, filled with Sacred Black Powders, and with Monks Hair inserted within the Sai Dood Sap amulet. This is a most original and culturally valuable form of amulet, that will leave you with little chance of ever encoutnering another person wearing the same amulet. Its unusality is of course a high point of conversation in itself, and its interesting story can only add to its attraction power.

Its empowerment from Luang Phu Bpun, is a powerful aspect of what makes this amulet special for its goals and purposes, as well as the secret sacred powder ingredients within the Sai Dood Sap, which have been charged up with the power of Incantations over the 3 Month traimas Rainy Period where Luang Phu remained at the temple of Wat Ban Sangk in Roi Et, and spent the nights in his Kuti Hut, performing the chanting of incantations and meditative kasina and Jhanic empowerments.

For visualisation of applied magickal effects onto amulets, with meditative force, the formula of using the shape and form of the Sai Fish Trap basket, is perfect, for envisionment of money or envisioned objects entering the trapdoors of the Sai Fish trap (now a magickal money trap instead), and being unable to flip the trapdoors back open to leave again, as the basket fills up and becomes full to the brim with desired possessions and wealth. This is what you shold envision whislt holding the sai Dood Sap amulet, and chanting 'Ehi Jidtang Bpiyang Ma-Ma', whilst thinking 'come to me all of these things'.

The 'Sai', is an Olden Days invention of Thai Farmers, who in the months after the harvest, when nothing was left to do until the sowing season, would use the spare time to find other ways to find food or things to sell.

They would scour the surrounding areas, the marshes, streams rivers and ponds, for fish. The Sai was a basket made with two special openings in it, where fish could swim into the basket, but were not able to swim out aqain, effectively imprisoning them until enough fish were inside the basket to take to market, or to go home and eat, or both. 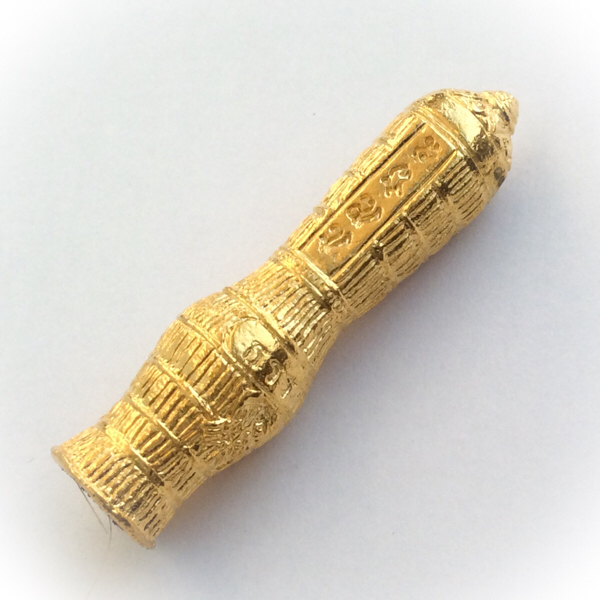 The allusion is obvious, that the Sai will allow wealth to enter into your possession, but not allow it to slip out through your fingers anymore, and keep it safe, and on the increase. Luang Phu Bpun is a Master of the Luang Phu Mun Puratto Lineage and Abbot of Wat Ban Songk in Roi Et (Isan). He is famous for his Wicha of Hun Payont making, and is a Gaeji Ajarn who has assembled a large array of sorcery spells under his mastery over the many decades of practice he has had. 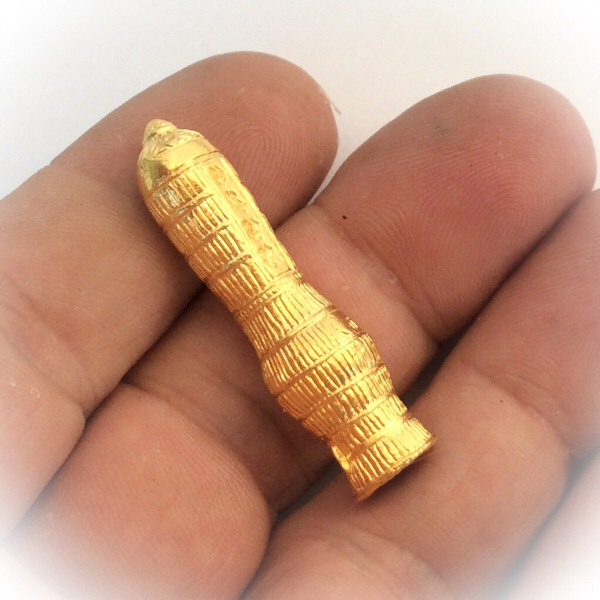 The Sai Dood Sap is an inimitable and refreshingly different wealth charm that stands out from other amulets for its unusualness. The Sai itself as a traditional fish hunting trap, is also these days relatively unknown to the present generation of Thai People, for indeed, the country folk no longer need to fin fish in this way, for supermarkets and large fresh markets have become cheaper in price and it is no longer worth it to use the traditional method. 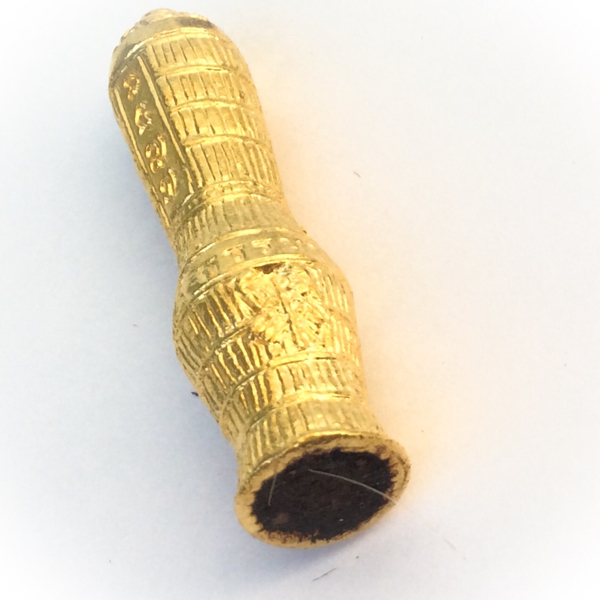 Hence, the Sai is also hardly thought of or heard of or seen as an applied method for using its form to condition magical spells into. This of course elevates Luang Phu Bpun to status of not only a Wicha preserver, for his diligent preservation and transmission of the Wicha Hun payont Boran Ai Geng Gang, but also for his Adepthood in creating his own style of applied Wicha, which is of course the sign of a Master Sorceror of Grand Master level. Only grand Masters create Wicha, whereas mages of the standard level wil only use lineage transmitted Wicha. 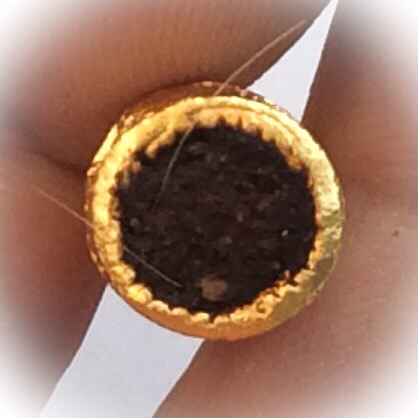 The Sai is filled with sacred Powders, and has Monk hair from Luang Phu Bpun embedded within it. The Sacred Khom Agkrara spell inscription on the side of the Sai says 'Na Chaa Lii Dti' which is the Kata pra Chimplee/Pra Sivali, and can also be used to chant and envision your favored desires/wealth/winnings entering into your possession.

The Kata Pra Chimplee is a perfect accompaniment to induce Maha Lap and Maha Pokasap power into the amulets to increase their effect. 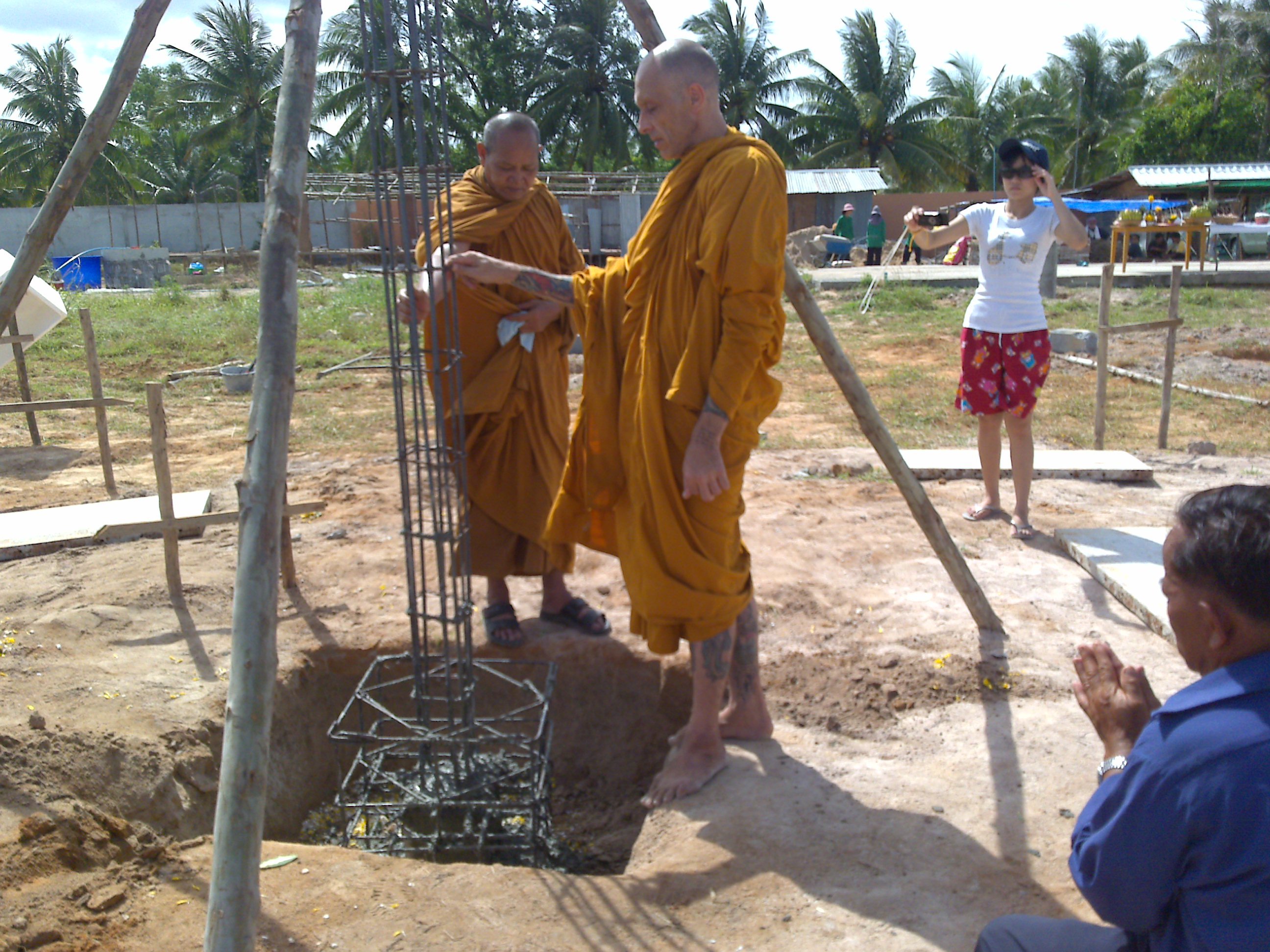 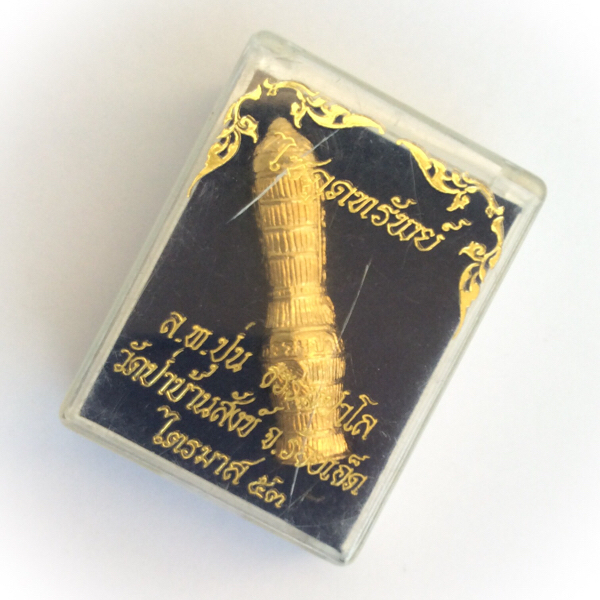 The Sai comes in original box from the temple. Can be encased if desired.