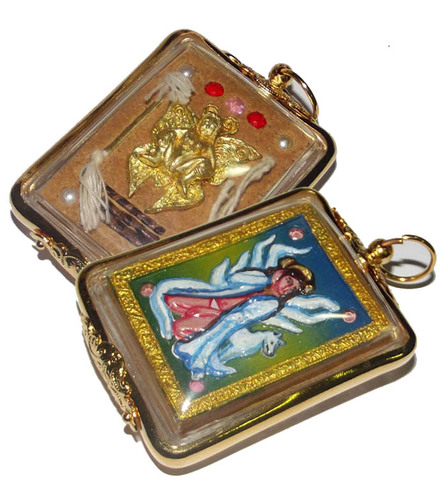 Nine Tailed Fox Demoness Enchantress - Powerful Prai Ghost Deity for Seduction and Dominion over the Hearts of Others. Masterpiece Ongk Kroo Sacred Powder amulet with the Invocations of the Nine Tailed Fox and the Taep Jamlaeng Butterfly Deva.

Further empowered with Ploi Sek (Enchanted Gemstones which have been empowered with Incantations), Pearls, Python skin Takrut spells for Metta, which possess the Invocation of the Wicha Paya Ngu Pan Hlak Mad Jai (one thousand coils snake that binds the heart). 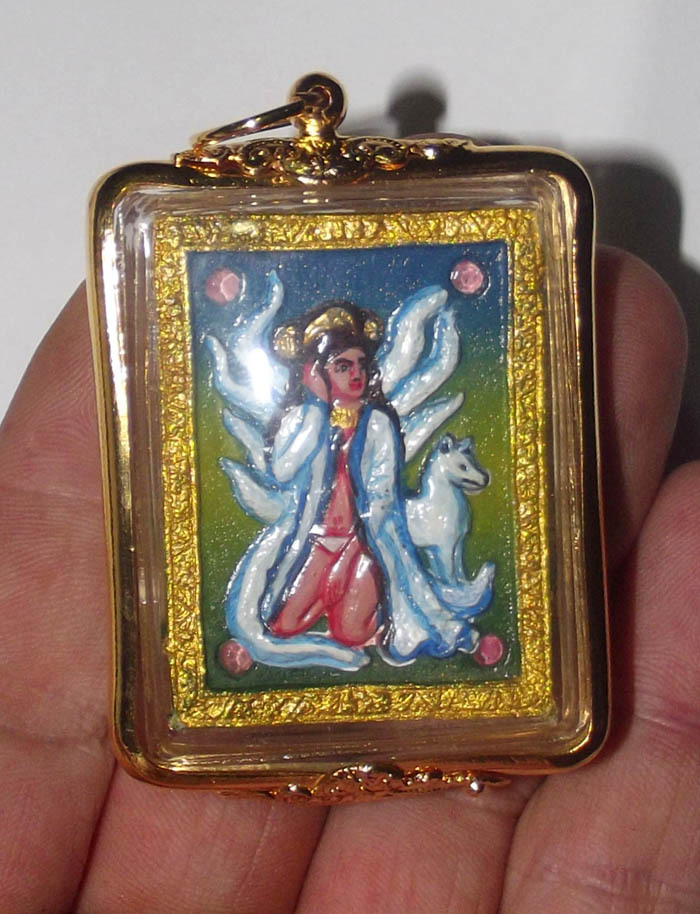 This amulet was released in two different colors, red or green, this is the green version. 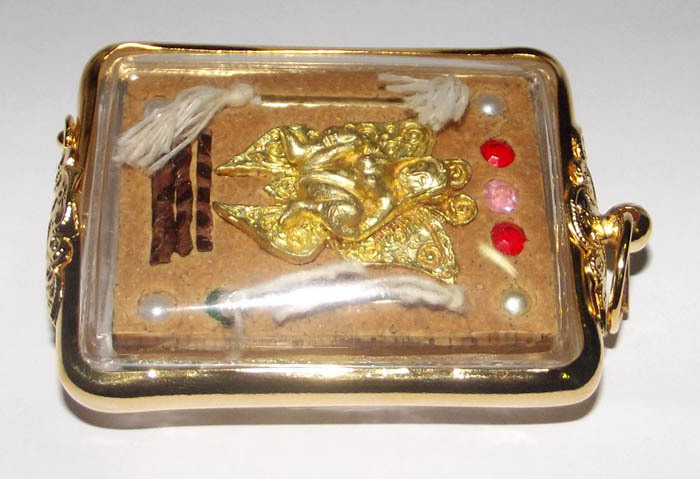 'Khrua Phu In' (Luang Phu In) has made these powerful, luxurious and very beautiful Taep Nang Jing Jok amulets, empowering them with the insertion of Takrut Hnang Ngu Hlueam (python), Takrut and Takrut Maha Sanaeh with the Montr Jia Naree an ancient Khmer Mantra spell that carries Immense Maha Sanaeh power, and imbibes the Muan Sarn with increased potency of Attraction. The Python takrut are empowered with the Montr Paya Ngu Pan Hlak Mad Jai - one of the most powerful Serpent Wicha, with Great Enchantment properties.

The Nine Tailed Fox is a Legendary Demon, known in Indian, Koran, Chinese, Thai and Japanese Spiritual Cosmology, legend and Myths. The nine-tailed fox (Chinese and Japanese: 九尾狐; pinyin: Jiǔwěihú; Korean: 구미호) is a mythological creature species that was depicted in the Nanshan jing, Haiwaidong jing and Dahuangdong jing of Shan Hai Jing as having the voice of a human infant. It can be eaten by humans, and those who eat it can be protected from evil. Later in history books like Book of Zhou and story collections like Extensive Records of the Taiping Era, the nine-tailed fox was depicted as a beast of fortune. Sent by the heavens, the nine-tailed fox was seen as a sign of fortune, peace and luck. In the Han dynasty, it is the protector of royal blood. The Nine Tailed Fox is able to enter and possess others, and is able to change its shape and form, a Master of Illusion. Its ability to attract the other sex and seduce them into the bed has gained Legendary status in all Cultures where stories of its existence have arisen. 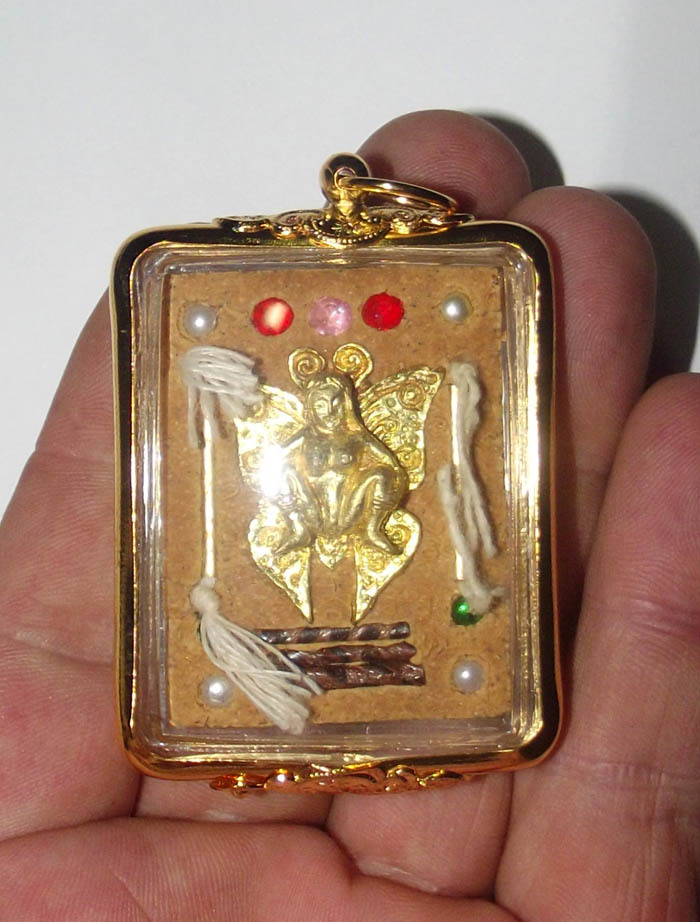 Empowered with the full Sutra of Formulas giving each individual item combined within the amulets their own individual empowerment according to the Wicha for each substance;The Nine Tailed Fox Demoness (front face) 9 Gems (4 front face 5 back face) 2 Takrut Maha Sanaeh, 3 Takrut Ngu Hlueam (python), 4 Pearls, and the Taep Jamlaeng Butterfly Deity (a kind of Yintong Hermaphrodite with extreme Metta, initially made famous by Kroo Ba Krissana, but indeed practiced by many Thai, Lao, Khmer, Gariang and Tai Yai Sorcerors). 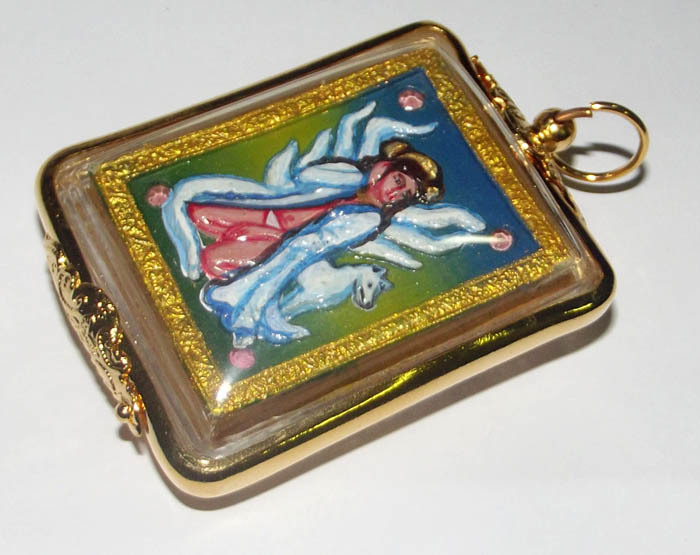 A truly powerful Seduction Sorcery spell from Luang Phu In Khematewo, intended to increase your success in Charming your Lovers, Peers, Friends, Superiors, Employers, and Potential Customers. The seduction power of the 9 Tailed Fox is extremely powerful due to her Demonic Nature. Phuudtaa and Pisaj type spirits (Daemons/Phantoms) are known for their extreme Psychic Powers and Magical Might. The comnbination of Nine Tailed Fox with her seductive Power and Extreme Might of Dominion, along with the Taep Jamlaen with her Great Metta Maha Sanaeh Magic, should provide a double barrelled Enchantment Spell that is second to none in Magical Power, Quality of Sacred and Precious Ingredients, Aesthetic Beauty and Originality. The Gold Plated Waterproof Casing provides a safe and attractive houseing for this Masterpiece Amulet of Distinguished Excellence from Luang Phu In.

Luang Phu In's Mastery in the Wicha Maha Sanaeh of the Khmer Schools of Sorcery is now since many years well established and proven with a series of successful Editions of Maha Sanaeh amulets , all of which took the amulet community by storm and were sold out edition for edition as the success of those who used them became so talked about that his powerful Maha Sanaeh amulets coould no more be hidden from the eyes and ears of the General Public. 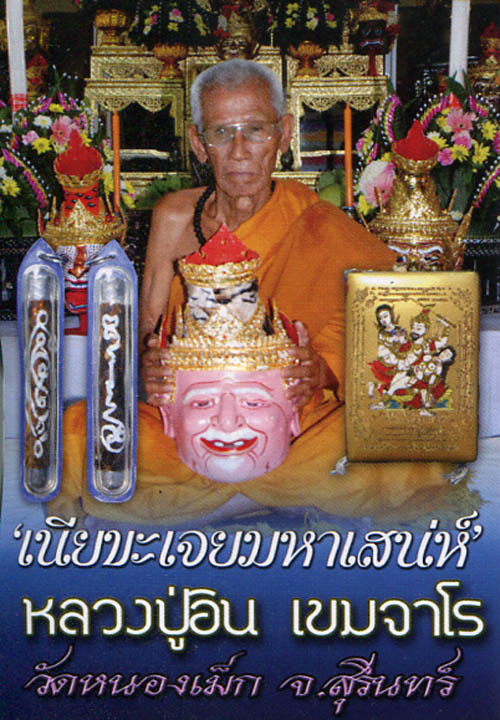