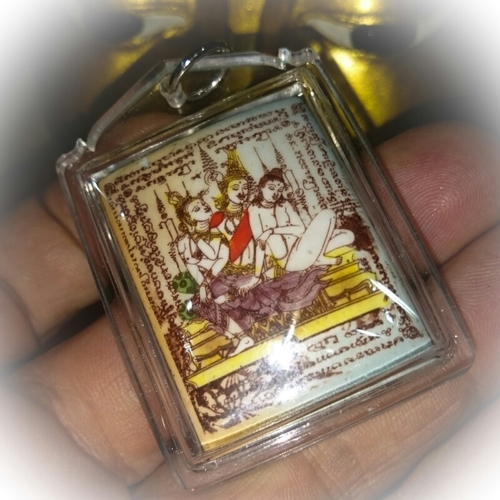 His powder amulets of Paetch Payatorn are already immensely popular and successful with our customers, and these lockets are yet another subtle variation, for a wide and varied choice for what is in principle the same deity.

This Locket is a 'Chak Tong Fa Ongk Kroo' - a special Pim Yai model with gold/sepia-blue-white face, and double concentrate of sacred Muan Sarn mixture, enriched with charm oils, and a rare 'Rak Sorn' love charm flower. 'Rak Sorn' means 'concentric, or multiple lovers. The front face features a Taewada (deva angelic being), with one maiden in the bed, and another by his side joining him in Nuptials. 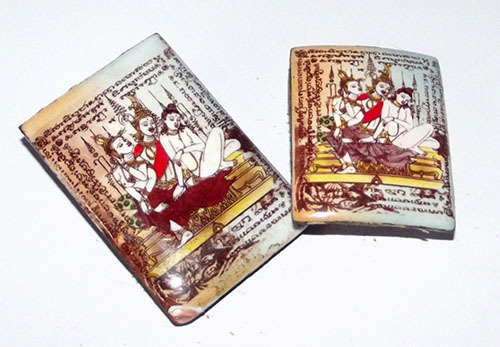 This amulet comes with free waterproof casing already included in the price.

Apart from this Ongk Kroo Model, there was also a smaller standard size version released in this edition, which has 14 gems, 2 pearls, 7 Takrut and one Paetch Payatorn insert

The sacred powder Muan Sarn base has extra powerful concentrated powders and a double helping of sacred charm oils for this multi-tonal color faced Gammagarn Special model (Pim Pised). The locket emanates a very strong perfumed aroma, which is made to seep its Metta energies out slowly over a long period of time lending a slowly but surely steady improvement to all aspects of social and professional life, and attracting wealth and luck.

The Paetch Payatorn deity is one of the most successful amulets judging from feedback from our friends and customers, for which we recommend this locket along with all other Paetch Payatorn amulets from Luang Phu In . This amulet can be used successfully by both Male or Female user.

The sacred Muan sarn powders and oils of the rear face have an immensely powerful aroma which emanates Metta and stimulates the pleasure pheromones, causing those who approach to feel Metta towards you. Luang Phu In applied his mastery of the powerful ancient Khmer Wicha Gampong Jam to empower the lockets with the powerful Khmer Wicha which has made the Paetch Payatorn amulet such a noticeably effective amulet. Apart from its powerful magic influence, it is in our opinion one of the more beautifully designed types of Maha Sanaeh amulets to be found.

We are always happy to add as many Paetch Payatorn amulets from our Luang Phu In to the store, for we truly believe in their power to increase Business, Wealth, improve Love Life and Family Happiness. The Paetch Payatorn is thus our most recommended amulet for auspicious wealth increase for those who prefer to keep the Sila, and work with their amulets to generate Metta Power, rather than use powerful dark magic to get fast results, with perhaps unexpected or undesired side effects.

Two female deities are attending the Taewada Paetch Payatorn Deva in Kama Sutra Yab-Yum embrace. Immensely powerful amulet for traders, lovers, businessmen, merchants, gamblers, promotion and favor seekers, and those who wish to generate a life full of metta with an auspicious enviroment surrounding you. 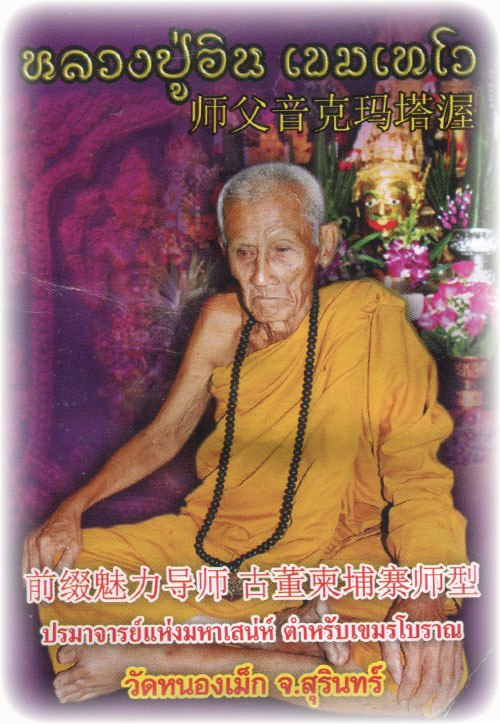 Luang Phu In Khemataewo – Wat Nong Meg (Surin) – Master of Wicha Khmer – Maha Sanaeh Metta Choke Lap. As he was still a young man, he was already a Master of Wicha Maha Sanaeh (attraction and riches charm). As a layman he loved to practice Maha Sanaeh magic. When he ordained, because his inclination was to make amulets, he sought out a dozen or more great masters to teach him their various Wicha……. 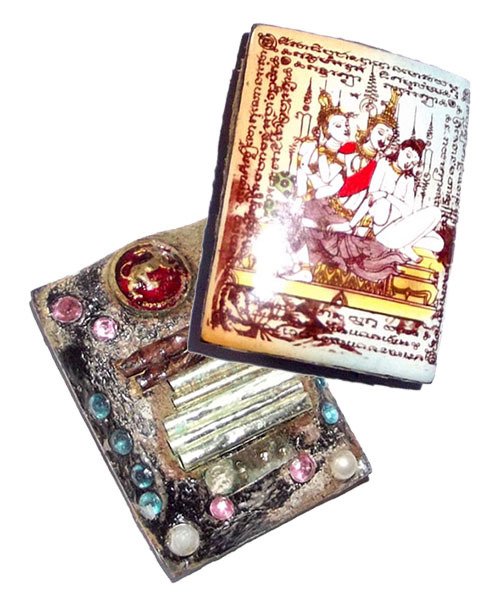