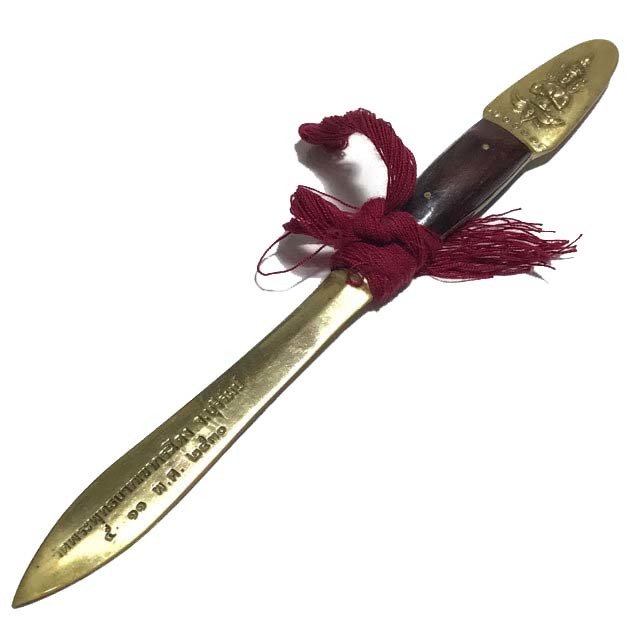 A very rare item for Bucha and applied ritual use as a Magical instrument, the Prakhan Mitmor Sastrawut 2530 BE First Edition Ritual Sceptre-Knife from the Great Isan Master, Luang Por Tiang of Wat Pra Puttabat Khao Gradoeng. The Mitmor measures 7 inches long in total, with the blade being 5 Inches in itself

The Mitmor is used for Bucha to pray to for Blessings, but is also a kind of Magic Wand, Sceptre of Command over Spirits and Ghosts, and a Weapon to Banish Evil Spirits and Nullify Curses. Mitmor are used by the Masters to perform Inscriptions on the devotees, or upon inanimate objects, to invoke magical spells and bestow blessings. 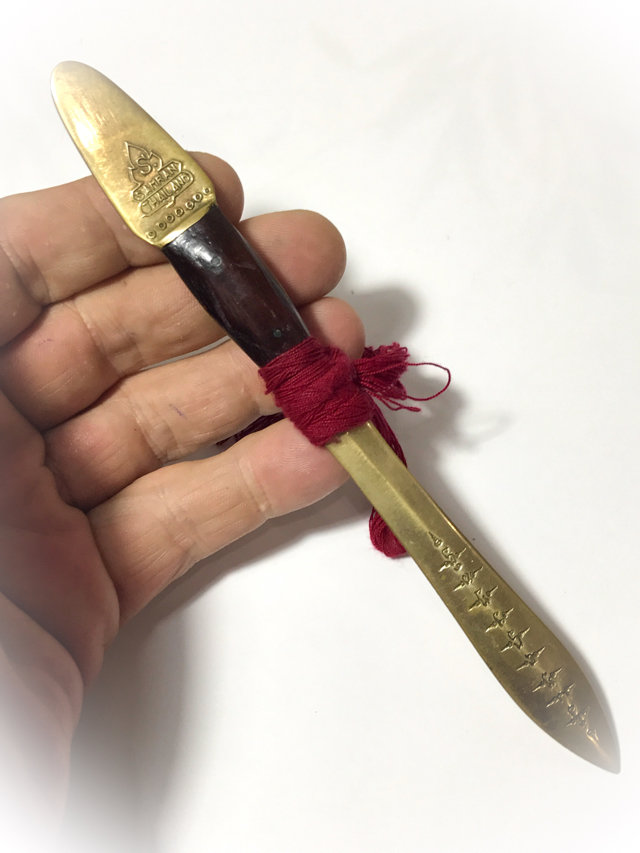 The Mitmor can be used to stir prayer water whilst performing incantations for whatever kind of blessings one may seek to invoke, bne they Kong Grapan Chadtri Klaew Klaad, Maha Lap Maha Pokasap, Jerajaa Khaa Khaay, or Metta Maha Niyom Maha Sanaeh. You can use Buddhist Prayers and Candles to perform Holy Water Making, and stir the water in a clean clear bowl with clean clear water in it. 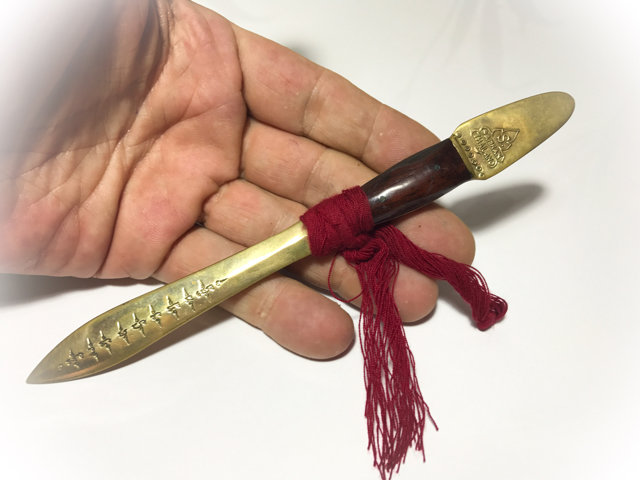 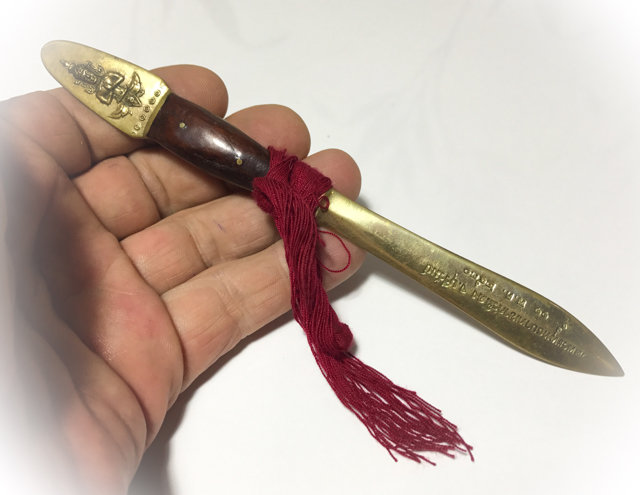 Municipality in Buriram, in the North Eastern Isan Regions of Thailand. He was born on Thursday the 1st January 2484 BE, on a full moon of the second lunar month in the year of the Snake. Luang Por Tiang studied until primary school level after which he helped his parents with the farming duties.

He was ordained at the age of 29 into the Sangha as a Bhikkhu on Saturday 16th May 2513 BE at Wat Isan in Buriram. His Upachaya Ordaining Officer was Pra Meti Tammaporn, and his Gammawajajarn Prompting Officer was the Great Luang Phu Bun Ma, and Luang Por Jamras was his Anusawanajarn Witessing Officer. 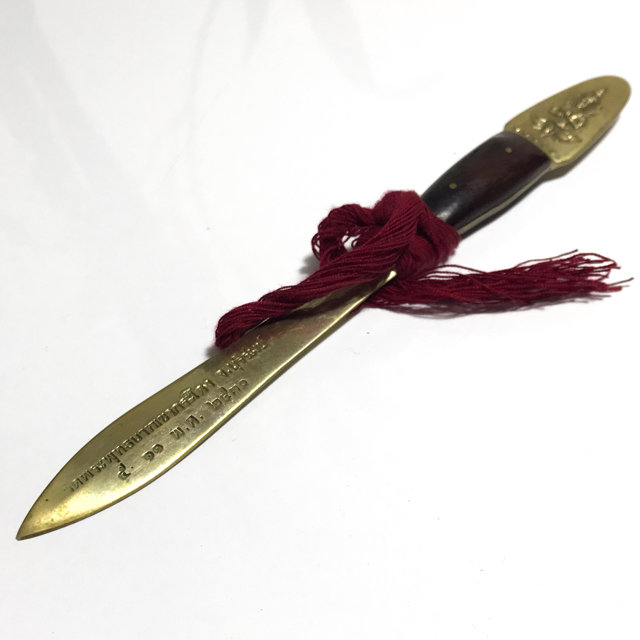 After his Ordination, Luang Por Tiang first stayed for many years at Wat Pra Puttabat Khao Gradoeng, and studied Witayakom (Buddha Magic and Dhamma Theory), and Vipassana Kammathana Mindfulness Meditation practices. He became an Adept Practitioner over the years, and was seen to have attaiined the same level as his Kroo Ba Ajarn Luang Phu Bun Ma himself, and so he was told that he should go out on solitary Tudong forest wandering, if he wanted to attain the full realisation of the Buddha-Dhamma. It was on Tudong Hence where Luang Por Tiang then developed the immense strengths necessary for meditative prowess to gain access to the supernatural Abhinya abilities. 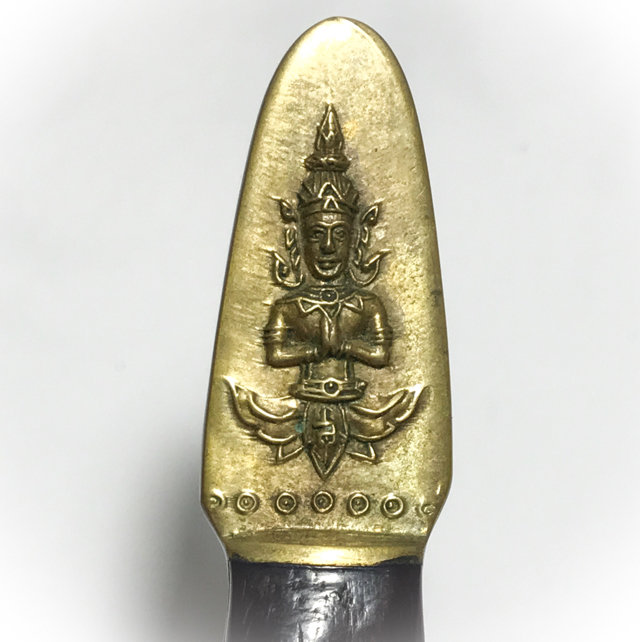 Luang Por Tiang spent years wandering in the jungle and mountainous regions of Thailand, Burma and Kampuchea, forging his strength of practice with the 13 Tudong methods. After some years, his Kroo Ba Ajarn Luang Phu Bun Ma passed away, and Luang Por Tiang returned to Wat Pra Puttabat Khao Gradoeng to help with the funeral arrangements and to be present to pay his respects to the deceased Master Luang Phu Bun Ma. Pra Atigarn yen was to be named as the next abbot after Luang Phu Bun Ma, and the temple returned back to its natural rhythm with its new abbot. 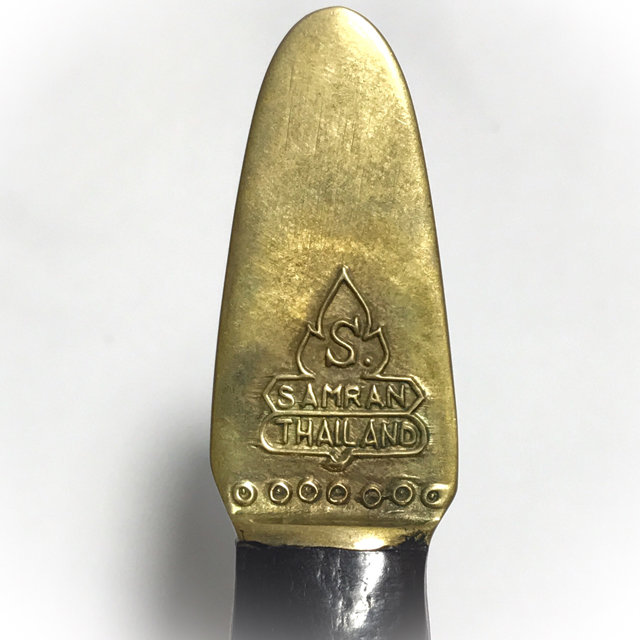 So Luang Por Tiang then took the opportunity to return back to the forests on Tudong, to further his abilities. This time, Luang Por Tiang traveled to the Northern Lanna Region, and into Burma, where he remained in the deep forest practicing for a year, lost to the world. Then one day he came across another Bhikkhu iin the forest from Laos called Luang Maha Dtan Orn, who was a monk from Vientiane. 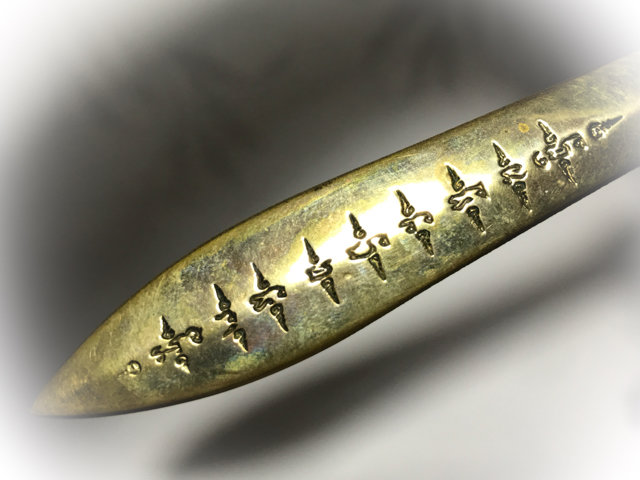 This Laoatian monk was highly adept in Kata Akom (magical Incantations and Spell casting), and had spent many decades on Tudong in the forests. He possessed techniques of meditation which when combined with Kata Akom Incantations, would invoke very powerful magical forces. And so Luang Por Tiang was able to receive and master these Wicha under the tutelage of Pra Maha Dtan Orn, and Luang Por Tiang also passed on his own Wicha which he had mastered under Luang Phu Bun Ma to Pra Maha Dtan Orn. 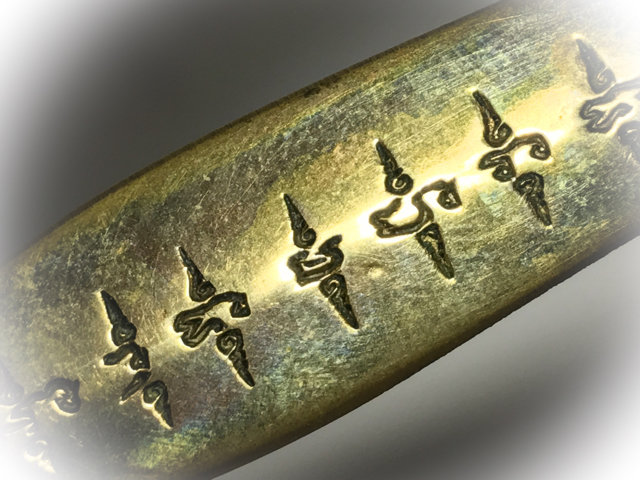 When the rainy retreat came, the two monks had to go their respective ways, and return to their temples, as is the tradition every year when the rainy retreat comes. Since the Buddha's times, it has been a tradition that all monks must leave the forest and stay in the temples during the rainy retreat, and practice the Uposatha. After the rainy season, Luang Por Tiang picked up his Glod Umbrella and wander off again to the Pra Wiharn Mountain to increase and perfect his Mastery of Wicha, and of himself. he met with various great Kroo Ba Ajarn from Kampuchea, with whom he submitted himself to serve under and learn their Wicha in their entirety. 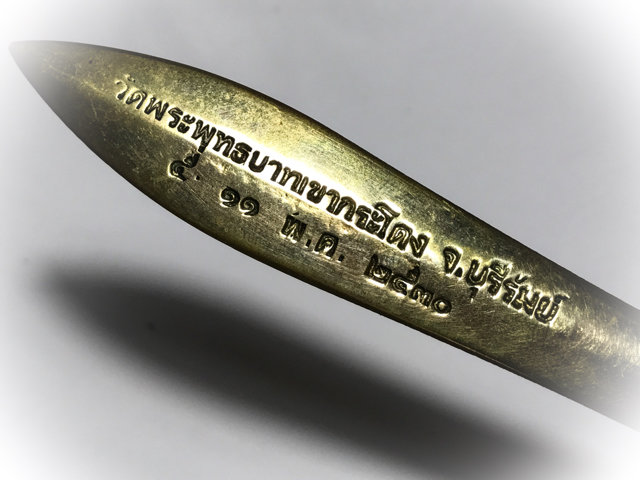 Luang Por Tiang then wandered further into the Kampuchean side of the border with the Great Luang Por Utai, who was a close companion, and they both met with a Great Forest Sorceror, who bestowed them with some of the Great Spells of the Ancient Khmer tradition, and trained them to raise their Abhinya Powers further. In the year 2522 BE, Luang Por Pra Atigarn Yen, abbot of Wat Pra Puttabat Ratanakiri, passed away, and Luang Por Tiang returned back to the temple from Tudong once again to attend, and was given the honour of taking up the position of abbot of Wat Pra Puttabat Khao Gradoeng, as the third abbot after Luang Phu Bun Ma, and Luang Por Yen. 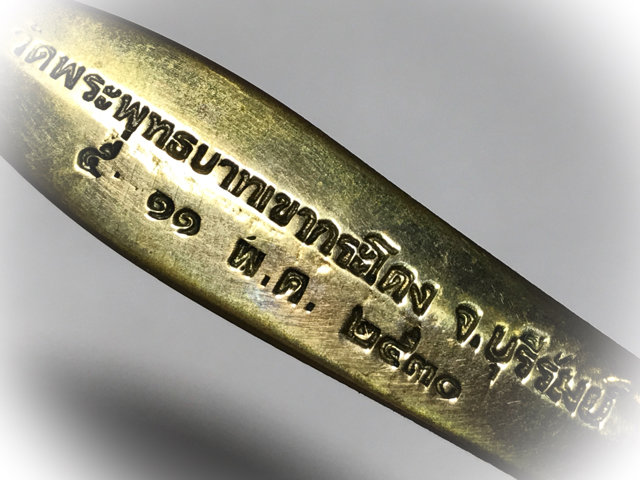 His great Practice and strict self discipline came to win the reverence and respect of the Devotees immensely, and his name came to be heard of around the Isan region. People from far and wide would come to receive his blessings and beseech his help. Devotees who came would find great successes following them home, and the lives of so many devotees improved miraculously after having visited, that his blessings became legend in the region. 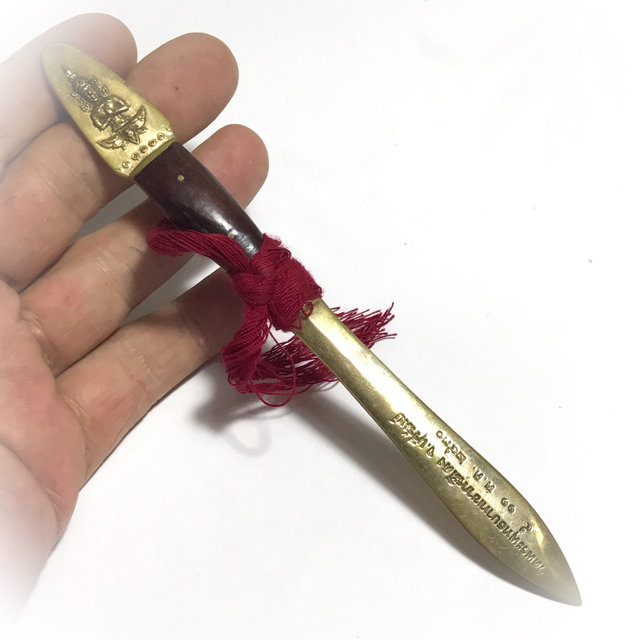 The temple grew in size and numbers of devotees as ever more people came for blessings, and the temple became a great temple of the Isan region through his merits. Luang Por Tiang passed away peacefully on the 7th March 2559 BE from old age and various common ailments of the aged, such as diabetes and blood clots, and blood pressure. He was aged 75 at the time of his passing, and had spent 46 years Ordained as a Bhikkhu. His remains are on show at the temple in a Glass Coffin, for Devotees to Worship.

Below; Luang Por Tuiang Featured with some of his famous amulets 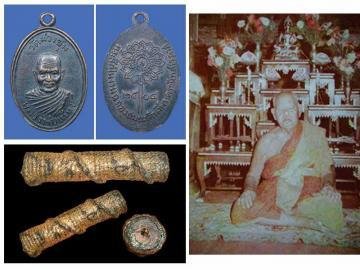 Below; Luang Por Tiang in Mother of Pearl Glass Coffin - After his passing, his body turned to petrified state, and does not rot. 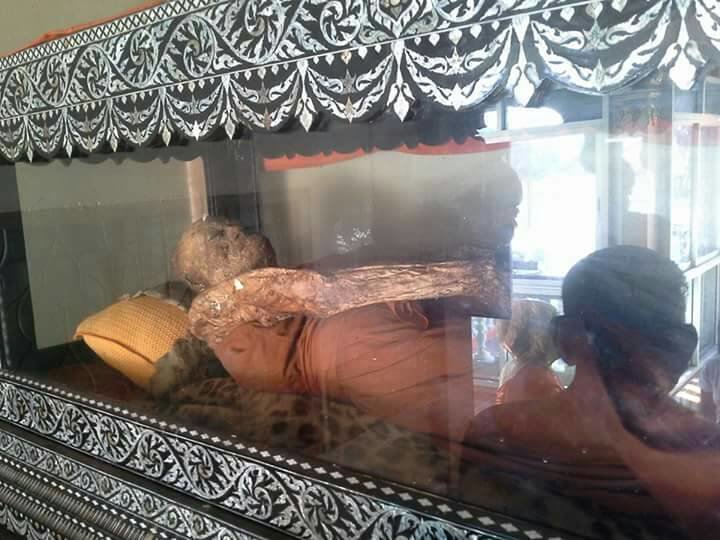