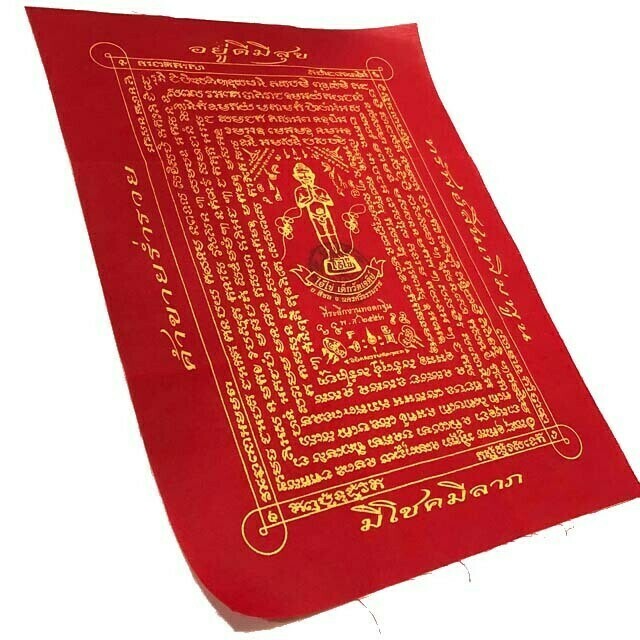 Pha Yant Daeng Ai Khai Dek Wat Chedi Yantra Cloth,, blessed in Buddha Abhiseka Ceremony in the year 2553 BE, after Traimas 3 month empowerment, at Wat Chedi, in the Tord Kathina Robe Offerings Ceremony, and empowered in Ritual Magical ceremony by the Great Masters of the Khao Or southern sorcery tradition. The Pha Yant measures 40 Cm High x 30 Cm Wide, and is on Red Pha Prajiad Cloth., with Golden image and Khom Agkhara spells surrounding and contained within the Yantra. 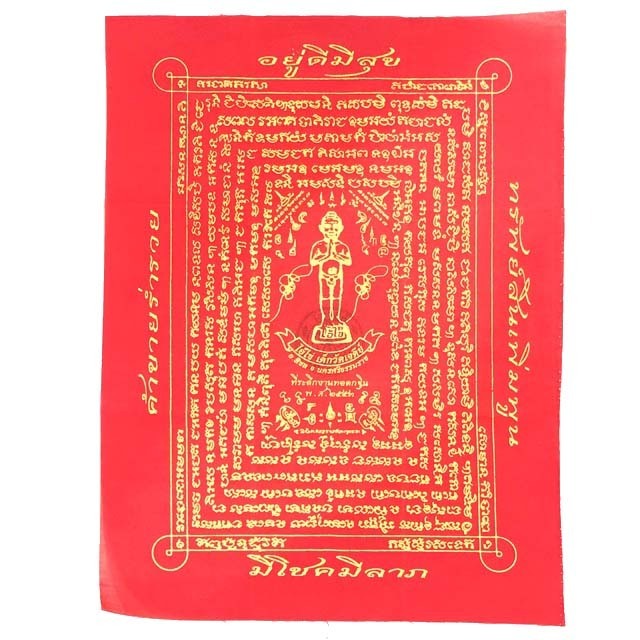 Ai Khai Dek Wat Chedi is said to be a young ten year old Samanera Monk who was on his travels with the Great Luang Phu Tuad on Tudong, and when Luang Por Tuad stopped to 'Pak Glod' (set up umbrella and mosquito net for meditation in the forest, he saw that the temple of Wat Chedi and vicinity was full of great treasures, and the temple was empty and without any monks to stay there. 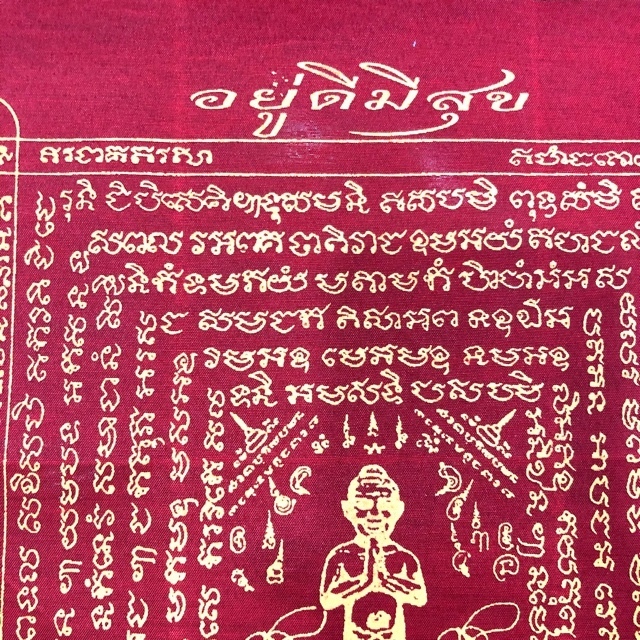 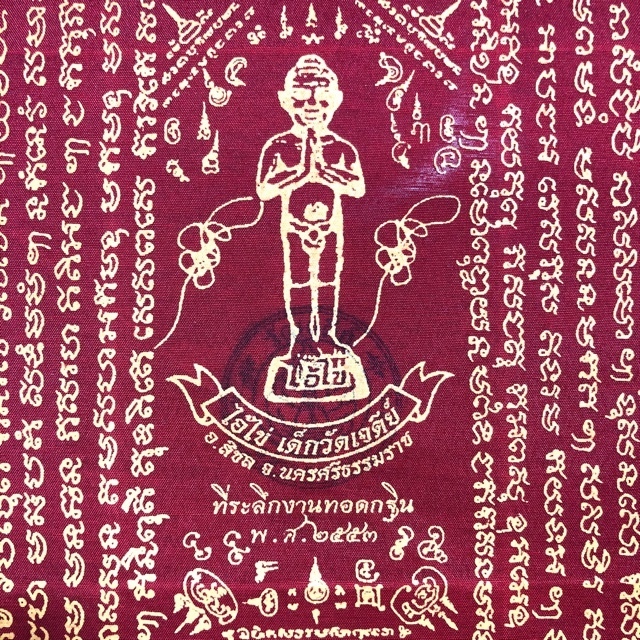 Local folk believe that Ai Khai Dek Wat Chedi is empowered to fulfil all wishes, and to be able to invoke lottery wins, and other auspicious blessings. Devotees flock to the temple every day to pay respects and Bucha, and beg for lottery wins, riches, good jobs and for their friends and family to be bestowed with great blessings. 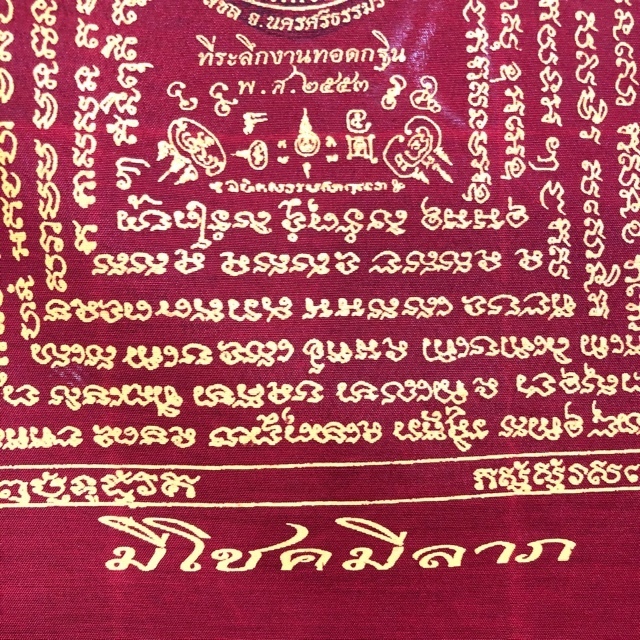 The temple of Wat Chedi was empty and dilapidated for over 1000 years before it was restored and re-inhabited by monks, in around the year 2500 BE when it was found and restored to its original state. A new Uposatha Building was installed, but as the workers were building who were sleeping in the area went to bed, many complained that they could not sleep, for the sensation of a little child pulling their arms and legs, and dropping objects on the floor. 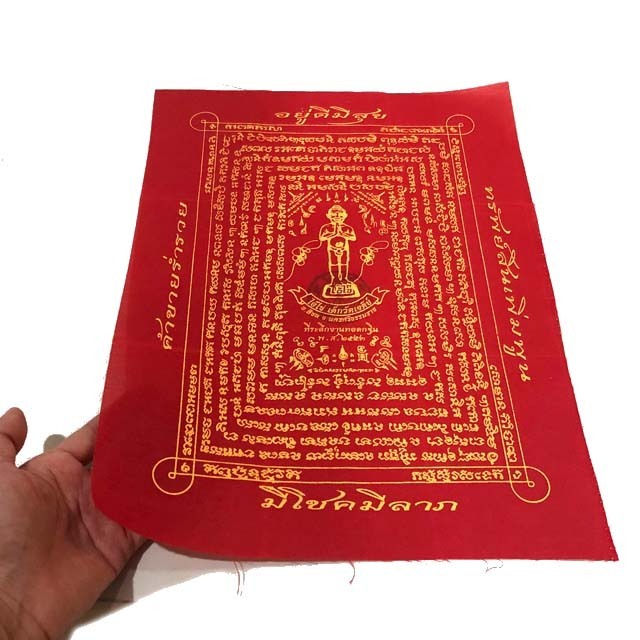 The local folk and Devotees of Wat Chedi like to call this Guardian Spirit 'Ai Khai' and some others call him 'Ta Khai', and even 'Baaw Khai' (a southern term used for a boy or young man). It is however argued that his proper name should be 'Ai Khai', because 'Ta Khai' means 'Uncle Khai' and the Deva always appears as a little boy, the name of 'Uncle' is not fitting.

The name of the Deva only became 'Ai Khai' after the construction of his statue at the temple of Wat Chedi, in Nakorn Sri Tammarat, The making of the Ai Khai Dek Wat Chedi amulets and Pha Yant began around 2532 BE, when Ajarn Tiang had a Nimitta vision of the Deva appear and order him to arrange for the building of the statue, sometime around the year 2523 BE. In the Nimitta, the boy took of his outer clothing to reveal he was wearing a Jivara Novice Monk's Robe.

Below the first edition statuette ceremony which released Loi Ongk Statuettes in first ever officially announced edition of Ai Khai statuettes in 2546 BE, blessed by the great master monks of the Dtamnak Dtak Sila Sorcery Tradition of South Thailand. However, there were images of this child ghost made unofficially before this date. Before this, only coins and Pha Yant, and other carved or modeled images were made. 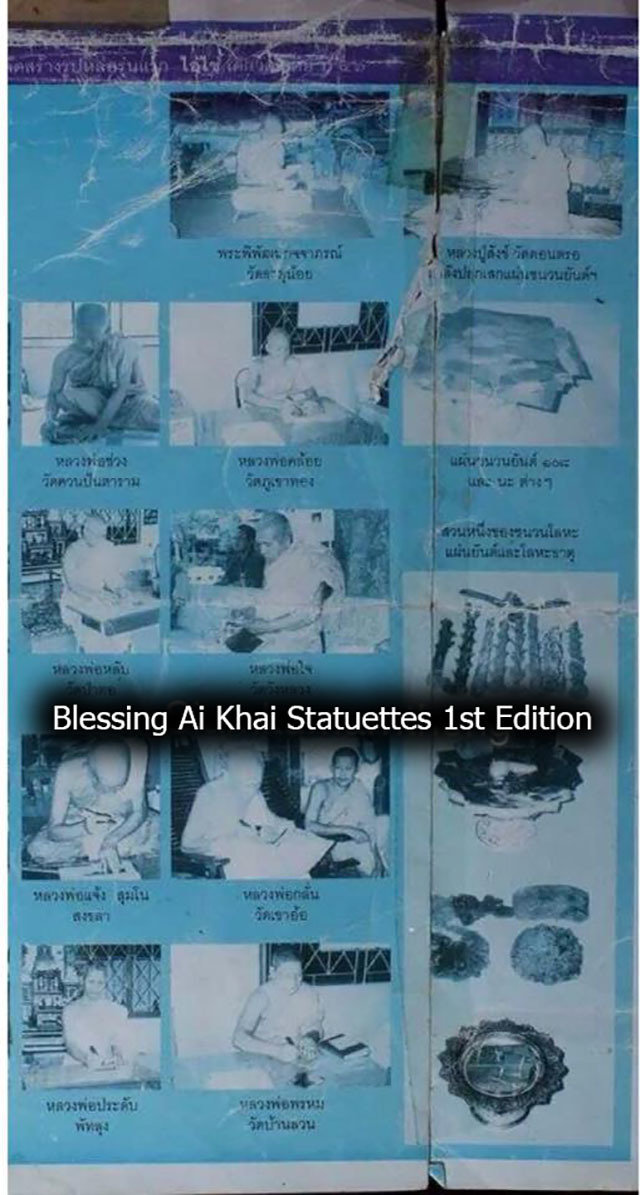 The spirit then said that the statue should be made for his spirit to inhabit as a source of emanation of wealth magic, and said 'I am Ai Khai, Dek Wat Chedi" ( I am Ai Khai, the boy guardian spirit of Wat Chedi). Since then, the spirit has been known as 'Ai Khai'

Ai Khai Dek Wat Chedi is a statue in the temple of Wat Chedi in Nakorn Sri Tammarat, made of wood, representing a boy around the age of 9 or 10 years old. The statue wears a commando's uniform, and dark sunglasses. Devotees flock to the temple to beseech blessings of wealth every day, and lottery wins for themselves or family members. 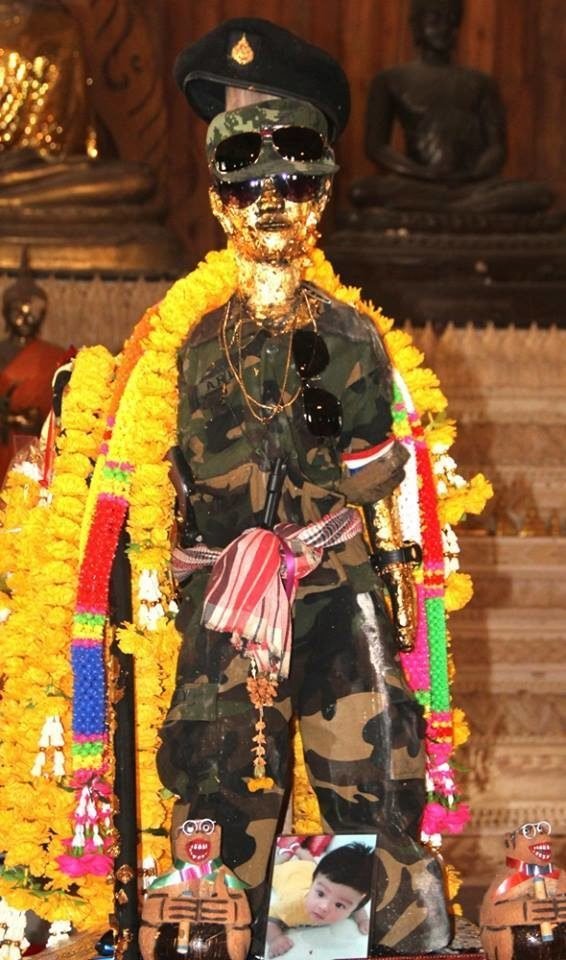 On the 13th - 17th April each year, a ceremony to make merit and wash the statue of the Buddha as is ubiquitous in Thai Songkran (New Year). The image of Ai Khai is also bathed in this ceremony as the deity of the common folk, who raises them from poverty to riches.

Light three sticks of Incense, and make your prayer and request (such as 'let me win the lottery' or 'let my son get a promotion' and say what one will give in return if the wish is fulfilled, such as 'if i win 1 million, i will donate 100,000 to the temple' or 'if i win a million, i will donate 100,000 to help orphans, and share the merits with you' or whatever your decision of repayment may be. 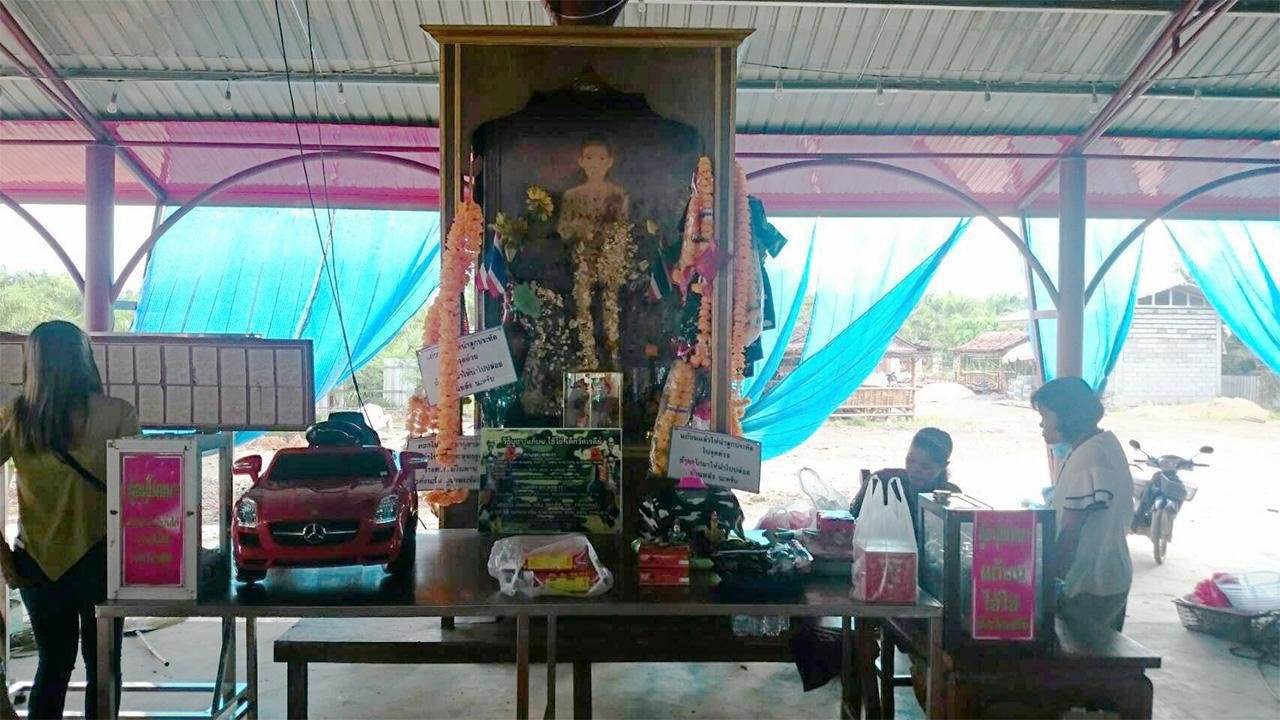 Important things to know about placement of the amulet for Bucha

You should never use the receptacles, bowls and glasses used to give offerings to Ai Khai for your own use, and keep them specially separated for the sole use of offerings. All the vessels (plates cups and bowls) used for offerings should be all placed on a tray together before offering, and not placed one by one on the altar. The receptacles should not come into contact with the surface of the altar, for which the tray is used instead.

Bucha Ai Khai on Saturdays and Buddhist Holidays (good for praying for good health), and if beseeching lottery or wealth, for yourself, at best perform Bucha and prayers on your birthday. Offerings need only be given on the above occasions, but his water should be changed every single day.

A piece of red cloth should be placed underneath the image of Ai Khai for proper Bucha.

You must never forget to repay wishes fulfilled by keeping your pacts with Ai Khai and paying your dues in whatever way you have agreed to as you prayed for the miracle.

Ai Khai loves truth and truthful people, and will bestow the highest blessings on those who remain in Truthfulness. if you need to avoid being truthful or speak an untruth, in the presence of Ai Khai, you should cover him with a piece of cloth, but remember,, you cannot cover your own conscience. Make sure the only times you lie or evade truth, is for positive and auspicious reasons, and never dishonest ones. if not Ai Khai will not bestow large blessings.